Read A Game of Sorrows Online

A Game of Sorrows 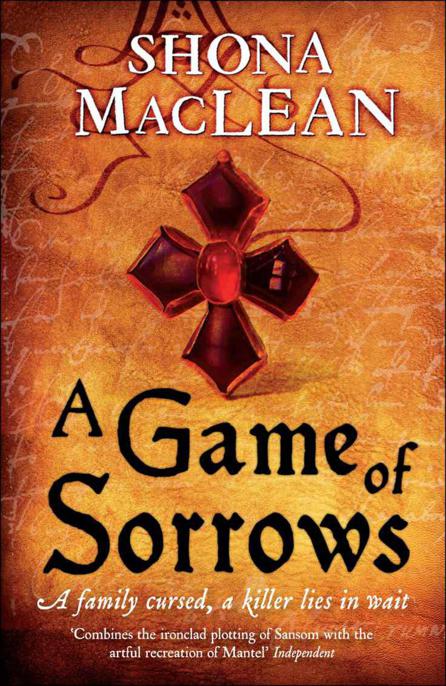 ‘An astonishingly accomplished first novel. Shona MacLean has wrought a fine, rich, beautiful thriller that never loses sight of the heights to which the human soul can soar, even while it explores the depths to which envy, jealousy, hatred and greed can take it. This is a delight on all levels, literate, engaging and moving.’

‘Pacy and literate, this is an accomplished and thought-provoking debut.’

‘A book for C J Sansom fans,
A Game of Sorrows
deftly tackles religion, superstition and murder. With informed attention to detail, MacLean has crafted an intelligent and engrossing mystery.’

‘Such is the quality of the recreation, not only of the reeking ebb and flow of everyday life, but also of the period mindset that it’s easy to believe that Satan is walking abroad. This is an accomplished and thought-provoking debut.’

‘Mistress of mystery and suspense … This is a substantial story, well researched, never slackening pace.’

‘The book is written in the mould of writers like C J Sansom and Ariana Franklin, but goes beyond usual thrillers … The book is excellently plotted with a genuine mystery at the heart of the story.’

Shona MacLean
has a PhD in history from Aberdeen University, specialising in sixteenth- and seventeenth-century Scottish history. She was encouraged to write by her late uncle, Alistair MacLean. She lives in Banff, Scotland with her husband and four children. This is her second novel.

The Redemption of Alexander Seaton

A GAME OF SORROWS

The moral right of Shona MacLean to be
identified as the author of this work has been
asserted in accordance with the Copyright,
Designs and Patents Act, 1988.

All rights reserved. No part of this publication
may be reproduced or transmitted in any form
or by any means, electronic or mechanical,
including photocopy, recording, or any
information storage and retrieval system,
without permission in writing from the publisher.

This book is a work of fiction. Names, characters,
businesses, organizations, places and events are
either the product of the author’s imagination
or are used fictitiously. Any resemblance to
actual persons, living or dead, events or
locales is entirely coincidental.

The wild or mere Irish have a generation of poets, or rather rhymers vulgarly called bards, who in their songs used to extol the most bloody, licentious men, and no others, and to allure the hearers, not to the love of religion and civil manners, but to outrages, robberies, living as outlaws, and contempt of the magistrates’ and the king’s laws … For the mere Irish, however … they nothing so much feared the Lord Deputy’s anger as the least song or ballad these rascals might make against them, the saying whereof to their reproach would more have daunted them than if a judge had doomed them to the gallows.

In the early decades of the seventeenth century, Ulster was a province undergoing tremendous change. From the time of the first Anglo-Norman incursions in the twelfth century, English power and interest in Ireland had fluctuated significantly, but the ‘Old English’, as they became known, never left, and over the centuries became deeply rooted in Irish society, at times marrying into the native Irish aristocracy and adopting their speech, manner and way of dress. In the course of the sixteenth century, the Tudors under Henry VIII and Elizabeth I made resolute efforts to extend English royal power throughout the island. The greatest obstacle to their plans was Ulster which, under its native families, remained the most thoroughly Gaelic part of Ireland, with distinct language, dress, landholding and economic practices, cultural and religious beliefs and loyalties. The most powerful of these native Irish families was the O’Neills.

It became clear to the administration that for English power in Ireland to be assured, Ulster must be brought under control. This was not simply a question of political or military conquest, but of cultural assimilation. The native Irish leaders of Ulster must be brought to acknowledge the sovereignty of the English Crown, and the people under their authority brought into conformity with English mores.

While the native leaders appeared at first to be willing to secure their own title to land in return for acknowledging royal authority, increasing awareness of the concomitant assault on the Gaelic way of life brought them to rebellion. The most significant of these rebellions was that led by Hugh O’Neill, Earl of Tyrone, in what became known as the Nine Years’ War. The brutality and hardships of this war devastated Ulster. Tyrone’s ultimate submission in 1603, followed four years later by his flight to the continent with the Earl of Tyrconnell and other native Irish leaders, left Gaelic Ulster open to what English advisers had been urging for some time – not the Anglicisation of Ulster, but its colonisation.

Following ‘the Flight of the Earls’, the Crown initiated mass confiscations of native Irish land. Those who retained their lands held them on terms which greatly circumscribed their power and standing. Others, whose loyalty to the Crown was judged suspect, faced imprisonment, exile or death. Ulster was to be secured by the granting of the escheated lands to new landholders whose loyalty to the British state and the Protestant religion would not be in doubt. Pre-eminent in this new order were to be the ‘New English’ settlers, especially the ‘London Companies’ who were to re-establish and ‘plant’ the towns of Londonderry and Coleraine and vast tracts of land in the North with well-affected, mainly English or Scots, tenants. Only those judged most ‘well-affected’ amongst the native Irish were acceptable as tenants, generally on the poorest land and at the highest rents.

These ‘New English’ planters were distinct from the Catholic, Hibernicised ‘Old English’, having more in common with the Scots, who had been colonising areas of Antrim and Down for decades. Four peoples – native Irish, Old English, New English and Scots, with all their cultural, political and religious differences – were now left to forge a new society in what until the turn of the century had remained the most thoroughly Gaelic part of Ireland. Tensions and resentments were inevitable, and would eventually find expression in the carnage of the 1640s and the Wars of the Three Kingdoms.

Despite references to some actual historical figures and events – Randal MacDonnell, Earl of Antrim, James Shaw of Ballygally, Julia MacQuillan, the disaster of Kinsale, the abortive uprising of 1615 – and although the vast majority of locations mentioned in the text exist or existed, what follows is an entirely fictional account of how these tensions might have affected one family in Ulster in 1628.

The bride’s grandmother smiled: she could feel the discomfort of the groom’s family and it pleased her well. This wedding feast was a sickly imitation of what such things should be – her father would have been ashamed to set such poor fare before his followers’ dogs. But no matter. The music had scarcely been worthy of the name, and of dancing there had been none at all, for fear of offence to their puritan sensibilities. It was a mockery of a feast; she should not have permitted it, regardless of what her husband had said. It might well be politic to pander to the ways of these new English settlers, but it was not the O’Neill way, not her way. She should have insisted that the marriage took place in Carrickfergus, and according to her own customs. But the girl too had been against it – like Grainne, she would reap what she had sown, and she mattered little, anyhow.

Maeve looked down towards the far end of the table – they should not have put him there; he should have had the place of honour – these people knew nothing. Finn O’Rahilly was resplendent in the saffron tunic and white mantle, bordered with golden thread, that she had gifted him for the occasion. He would be paid well enough too, although it was not seemly at such times to talk of money. Regardless of all that her granddaughter and her new husband’s English family had said, on this one point the old woman would not be moved. There had been a poet at every O’Neill wedding through all the ages and, despite all that had happened, there would be a poet at this one, to give his blessing on the union, to tell the glories – fallen, broken though they now were – of the great house of O’Neill. As Finn O’Rahilly rose and turned to face her, Maeve felt the pride of the generations coursing through her: her moment had come.

Satan's Pony by Robin Hathaway
Dark Visions by Jonas Saul
What He Decides (What He Wants, Book Eleven) (An Alpha Billionaire Romance) by Hannah Ford
Liar by Jan Burke
A Game for the Living by Patricia Highsmith
Pucker Up by Seimas, Valerie
The Bullet List (The Saving Bailey Trilogy, #1) by Roman, Nikki
Someone to Watch Over Me by Michelle Stimpson
Unforgettable: A Loveswept Classic Romance by Cajio, Linda
Girls on Film by Zoey Dean