Read A Habit of Dying Online

A Habit of Dying 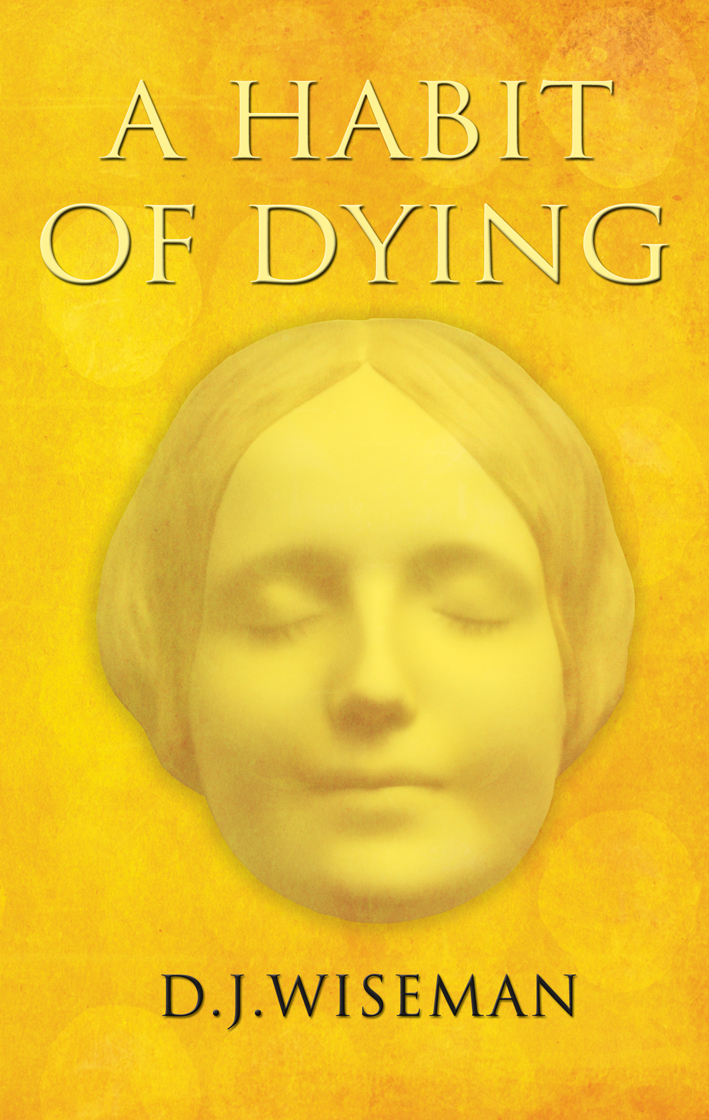 A HABIT
OF DYING

Apart from any fair dealing for the purposes of research or private study or criticism or review, as permitted under the Copyright, Designs and Patents Act 1988, this publication may only be reproduced, stored or transmitted, in any form or by any means, with the prior permission in writing of the publishers, or in the case of reprographic reproduction in accordance with the terms of licences issued by the Copyright Licensing Agency Enquiries concerning reproduction outside those terms should be sent to the publishers.

This book is a work of fiction. Names, characters, places and events are either the product of the author's imagination or are used fictitiously Any resemblance to actual persons living or dead, events or locales, is entirely coincidental

Matador
is an imprint of Troubador Publishing Ltd

DJ Wiseman has lived and worked in Oxfordshire since 1973. Lifelong interests include travel, maps, reading and photography. For the last 20 years he has had a passionate interest in genealogy, discovering branches of his family scattered round the globe. Despite a lifetime of writing, A Habit Of Dying is his first published full length novel.
www.djwiseman.co.uk

Much of this story is true, the rest is probably true.

Lydia splashed a little milk that was probably past its best over her bowl of cereal and hurried back to her bedroom, acutely aware that she was running late. Not so late as to matter but later than she intended to be. It was only a twenty-minute drive to the auction rooms but she had planned to leave earlier to give herself another chance to inspect the lots that she was interested in. Now she was in a rush, grabbing mouthfuls of her breakfast as she slipped out of her dressing gown and pulled on her familiar jeans and baggy sweater. It was her usual, one-outfit-suits-all-occasions, way of dressing. She squeezed into her jeans and pretended that it was less of a squeeze than it really was, then slipped the sweater over the frayed shirt that would be good for just one more day. Briefly she contemplated her reflection in the mirror as she passed a brush vigorously through her hair. For a few moments she considered the satisfactorily shapeless person who stared back at her. As with a dress which when first bought seems so right, so bright, so absolutely it, then one day quite suddenly is dated and a little faded, a little tired, so Lydia saw herself. She let the thought weigh a moment or two and then took a last spoonful from her bowl before grabbing her keys, her bag and setting off

The Saturday morning traffic was light as she steered her little Nissan out of Osney and along the Botley Road on her way to Eynsham. It was the same route as she had taken the previous night when she had been to view the two lots for which she was planning
to bid. The place had been busy with the usual eclectic selection of people poking through the equally varied boxes of china, well-thumbed books and bric-a-brac. It was the staple fare of the house clearance world, mainly worthless junk to anyone but the cheap collector or the car-boot sale enthusiast. But amongst it all there were a few good looking pieces of jewellery, a few real antiques of value and her own particular targets. The first was a box containing two service medals from the First World War. If she were successful in her bidding, Lydia planned to research them and then attempt to re-unite them with a relative of their recipient. It was something that she had done before, not with medals, but first with a family bible that she found at a market stall and months later with a photograph album she had picked up from the St. Frideswide’s church jumble sale.

For many years Lydia had enjoyed researching her own family history but more recently she had grown weary of the subject, for it seemed there were so few pieces of the jigsaw left to put in place. Those that she had found lately concerned only the most distant of relatives, and the more distant the cousin, the less the discoveries enthused her. But the whole business of researching and assembling the results to form a picture, sometimes from the most obscure of places and with only the tiniest of clues, that element still gave her great satisfaction. The idea of finding a living relative of the family who had dutifully filled out their details in the Victorian family bible had come to her the instant she had seen it. And that Californian woman - where else, Lydia had thought rather uncharitably - had been more than happy to have the heavy volume air-freighted at considerable cost to her home in Sacramento. Lydia had asked no more than the cost of the bible itself and the freight cost, but Ms Tammy Mills had insisted on adding fifty dollars to the payment.

The second re-uniting had taken a good deal less effort. The photo-album had looked as if it dated to the late nineteenth century and Lydia was not surprised to see that she recognised parts of Oxford in a few of the photographs. She loved the musty smell of the paper and enjoyed staring at the images, immersing herself in
the sepia world they portrayed. As her Oxford was right there on her doorstep, she once took the album out with her to compare a scene in Jericho with one of the pictures. Best of all was a photograph of an old couple standing in front of their house on Osney Island itself, just a few streets away from Lydia’s own. Most likely a family who might still have a local presence she had thought, and so it had proved. Since the great boom in family history it has been said that today there is at least one researcher for every family on the 1851 census. It had taken Lydia no more than a few weeks of careful investigation and some judicious web postings to find a great-great grandchild to whom the album was very special indeed. Of course, the task would have been almost impossible without at least one of the photographs having a name attached to it.

Today it was her intention to buy another such album, part of a job lot in a battered cardboard box, but under some of the pictures were names and places, neatly written in what Lydia had taken to be a young female Edwardian hand. The two medals were a different matter, not least because she had no idea of what price they might command or what interest there might be. She could afford whatever they might fetch for they were not special in any way, simply examples of the medals given to hundreds of thousands of servicemen for their part in the so-called Great War. From all she had read and learned there was precious little that was great about it apart from the number of savage deaths. But Lydia was not inclined to spend much of her money on a whim or what she still considered to be the luxury of her little hobby. Month on month she saw a small increase in her accounts and it had become an easy habit to fall into. If she could get the medals without endangering that monthly gain then she would, but if they went beyond her limit then she would let them go. It was all too easy to be a little carried away at an auction, each bid being just a few pounds more. If you were going to spend a hundred then why not a hundred and five, and if that then why not a hundred and ten?

It took a few minutes to find a parking space on the little industrial estate behind Eynsham where the auctioneers had their
rooms. It amused Lydia that despite being no more than a scruffy little industrial unit sandwiched between a roofing contractor and an electrician, the auctioneers still liked to call it their ’rooms’. There was a better crowd than usual, which did not bode well. The hot snacks van parked outside was doing a good trade in bacon rolls and the inevitable dripping burgers. The sickly waft of hot fat and onions made her grimace and wonder, as it always did, how it was that she could have been so attracted by it as a teenager. Distant days now.

Pushing through the knot of people at the entrance, Lydia made her way past the rows of cheap furniture, up the metal staircase to the upper floor where the sale would be held and where the crowded racks of smaller items were displayed. First, she checked that the little box with the medals was still in its glass display cabinet. A moment of anxiety as she couldn’t see it, but even as she looked closer an attendant placed it back on its shelf She became aware of another interested party, a man, in a threadbare black coat far too long and too thick for the clement weather. Unkempt grey hair, shiny and curling, hung over his collar. In another place he might have warranted no more than a glance, dismissed as a down and out, but the glint of heavy gold on podgy fingers said otherwise. Lydia thought she might have seen him at a previous sale and marked him down as a dealer, someone with more money than she had and with profit the only motive for purchase. But the medals were there, they had not been withdrawn at the last moment. She turned away, unwilling to show any further interest, and looked to the back of the room where the crowd was beginning to thicken. A few steps back and she could just see the cardboard box with the albums, tucked away under a table where she had carefully placed it the previous night. No point in making it too easy for a casual browser to find.

Positioning herself where she might have a good view of the room and still be able to see if anyone rummaged in the box, Lydia spent a few moments observing the potential opposition. She had noticed in coming to these sales a few times that the less experienced would stand close to the item in which they were most interested,
while the regulars would take a seat on the random selection of chairs set out in rows facing the podium. A lot of dealers were in, she thought, and realised that she had barely looked at the rest of the catalogue, so intent had she been on her own two prizes. She fumbled in her copious bag for the crumpled sheets. Big blue crosses marked her two lots, numbers thirty and eighty-nine. The medals were the first of these. About an hour and a half might see a result one way or the other.