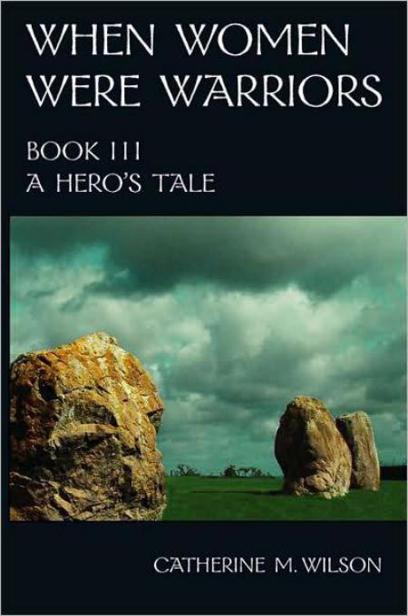 When Women Were Warriors Book III

This is a work of fiction. All characters depicted herein are the product of the author's imagination and do not represent any actual persons, living or dead.

For my mother
Acknowledgements

Many people offered advice, support, and encouragement during the "quite some time" it took to finish this project.

It is an extraordinary piece of luck for a writer to find someone who is willing to discuss a work in progress, someone who can enter the world of the story and gossip about the characters as if they were real people, who will question their motivations, scrutinize their actions, complain when they step out of character, and cast a light on a side of them their creator may have missed -- someone who will take the work as seriously as the author does. For me that person is my friend and editor, Donna Trifilo, who, in addition to all of the above, pushed me through the hard times.

To everyone who was willing to read a work in progress, sometimes more than once, I offer my gratitude and the assurance that everything they had to say about it mattered.

Susan Strouse helped me overcome a major stumbling block at a crucial turning point. Lisa Liel, whose enthusiasm for the story rekindled my own enthusiasm, showed me how I could take a good idea and make it better. Ann Thryft's considerable knowledge of the time, place, and culture deepened my own understanding of the story and its characters. Jo Trifilo's insightful comments and careful critique gave me a new perspective on the story.

And many thanks to George Derby and Marissa Holm for keeping me well fed.

Maara's voice intruded on my dreams. I heard her mumble something about visitors.

"Wake up," she whispered into my ear. "Don't show surprise or fear. Treat them as you would treat a guest at home."

I opened my eyes and looked up at her. While she waited for me to understand, she held me firmly against her side, to keep me still. When she saw that I was awake and in control of myself, she let go of me and sat up.

By the pale light that sifted in through the cracks in the tree trunk, I made out the figures of half a dozen people sitting only a few feet away from us across the fire. They were dressed in furs from head to foot and were so small I thought they must be children until I saw their faces.

She uncovered a few coals that still glowed under the ashes and fed them twigs and kindling. Soon she had a bright fire burning.

All the while our visitors watched us in silence. I couldn't keep from glancing at them out of the corner of my eye.

At last I whispered to Maara, "Who are they?"

"The forest people," she said.

She nodded. "Hand me the water skin."

When I sat up, I was aware of my nakedness. After I handed Maara the water skin, I looked around for my shirt, only to discover that several of the forest people were sitting on our clothing. Maara was naked too and didn't seem concerned about it, so I resisted the urge to cover myself. Maara filled our copper pot with water and set it to boil.

One of the forest people spoke. Her words were incomprehensible to me, but her voice was lovely, melodious and sweet. She spoke only a few words, then gazed at Maara, as if she expected an answer. Maara stared back at the woman, on her face an expression of delight. I was about to ask her if she had understood, when she spoke two or three words in the same incomprehensible tongue.

There was a moment of silence. Then all the forest people spoke at once, until the woman who had spoken first made them be quiet. She turned back to Maara and began to speak again. This time she made quite a long speech, and I took the opportunity to observe her more closely. She appeared to be the oldest person there. Her wrinkled face was dark. Wisps of black hair streaked with grey escaped from under a white fur hood that covered her head and shoulders. She wore fur leggings under a long skirt of deerskin and a cape of rabbit fur around her shoulders.

When she finished speaking, I whispered to Maara, "Did you understand what she said?"

Maara thought for a little while before making her reply. Although she spoke awkwardly, the woman nodded that she understood.

Steam began to rise from the pot of water. I assumed that Maara had intended to make some tea. While I rummaged through our things looking for my package of herbs, I listened to the halting conversation. When I heard Maara speak her name, then my own, I looked up.

"Aamah," the woman said, and pointed to herself. She named the others too, but I couldn't keep the strange sounds in my head.

I took the pot of water from the fire and crumbled into it some chamomile. The fragrance of the flowers rose into the air. The forest people seemed to find it pleasant. When the tea had steeped for a few minutes, Maara offered it, first to Aamah, then to the others.

"How much?" I asked her. We had very little left.

With the last of our oat flour, Maara made oat cakes. While we ate, the forest people spoke softly among themselves. All of them were beardless, and I listened closely, trying to discover which were women and which were men, but they all had the same high, sweet voices. Soon my curiosity was satisfied. The heat of the fire and the crowd of people inside the tree made it uncomfortably warm, and the forest people threw off some of their clothing. Only Aamah wore a garment I would have called a shirt, although it was made, not of cloth, but of deerskin. The rest were naked under their fur tunics. Two of them were men. One sat beside Aamah and appeared to be advising her. The other was no more than a boy. All of the forest people were thin, light-boned, with their ribs showing.

Their clothing was cleverly made. They didn't have the ragged look of the men who had been prisoners in Merin's house. I saw no weapons among them other than the knives at their belts. Some wore carved tokens of wood or bone. At first their faces all looked much the same to me, but as I looked longer I began to see how each one was unique.

When I compared them to Maara, I saw both similarities and differences. Maara was bigger than the forest people, taller and more strongly built. Their skin was darker than hers, and there was a difference around the eyes, but I saw in them the people she had come from.

There were enough oat cakes for everyone to eat their fill and still leave a few left over. Maara wrapped them in a cloth and handed them to Aamah, who fingered the cloth and smiled. I believe she valued the cloth more highly than the oat cakes.

The others were becoming restless, but Aamah gave no sign that she was ready to leave us. She reached across the fire and touched Maara's cheek, turning Maara's face first to one side, then the other. Then she coiled a lock of Maara's hair around her finger. Maara submitted patiently to Aamah's curiosity. When Aamah spoke to her again, it was both a question and a command.

Maara settled herself and took a deep breath before she began to speak. Her speech seemed a bit more fluent than before, though she often groped for words and made up for the ones she didn't know with gestures. She spoke my name several times and pointed toward the south and east, where we had come from. Aamah asked an occasional question, but most of the time she was content to listen.

Something Maara said made the forest people giggle and whisper among themselves. Aamah hushed them with a sharp rebuke.

I couldn't contain my curiosity.

"Why are they laughing?" I whispered.

"They say I speak as a child speaks," Maara said.

"You were a child, when you spoke as they do."

Again she spoke to Aamah, and I had an idea that she was telling her what I had said. Aamah nodded solemnly. Then she turned and spoke to the man who sat next to her. They conversed for several minutes, loudly enough for Maara to hear, although she pretended not to listen. At last they seemed to come to a decision. Aamah took a token, a piece of carved bone, from a pouch she carried on her belt and handed it to Maara. Then, as silently as they had come, the forest people left us. I turned to Maara, eager to learn what she and Aamah had talked about.

"She made us welcome," Maara said.

"She told me a little about her people, and she asked me about mine, as if she might have known the people I came from. What concerned her most of all, though, was why we're here."

"What did you tell her?"

"You told her we were outlaws?"

"No," she said. "I told her that you are heir to a powerful house and that your enemies tried to kill you."

I would never have thought to put it like that. "That makes me sound like the hero of a story," I said.

"Aamah agrees with me that no one from Elen's house is likely to come here in wintertime," Maara said. "Sometimes hunters will come, but the people of Elen's house stay away from the forest this time of year."

Again the icy finger touched me. "Why?"

"The forest frightens them. Old memories grow strong in wintertime."

As soon as she put it into words, I recognized my own feeling about the forest. This place that had at first felt so unfamiliar, now seemed more like a forgotten memory of childhood. Fragments of old stories hung in the branches overhead and told themselves in the sound of rustling leaves. Echoes of ancient songs murmured in the music of falling water. Childhood fears haunted my dreams.

"In a day or two, we'll return their visit," said Maara.

I brought myself back into the present moment. "Where do they live?"

"Their winter camp isn't far from where we were yesterday."

"Is that how they knew we were here?"

Maara chuckled. "They knew we were here from the moment we set foot in the forest."

"How many of them are there?"

I took it to be a symbolic title rather than a literal one. Surely Aamah hadn't given birth to all of them.

Maara gazed at the carved bone, Aamah's gift, turning it over and over in her fingers. She frowned, as she watched the pieces of a puzzle fall together in her mind.

"I once thought Aamah was my mother's name," she said.

I wondered then if childhood memories were haunting Maara too.

"Was your mother one of the forest people?"

Revealed by Evangeline Anderson
Random Chance and the Paradise that is Earth by Shawn Michel de Montaigne
This Year You Write Your Novel by Walter Mosley
Charlotte (Marked Heart #2) by M. Sembera
Dancing in the Moonlight by RaeAnne Thayne
The Playground by Julia Kelly
The Dance of Reality: A Psychomagical Autobiography by Alejandro Jodorowsky
Glasshouse by Charles Stross
Team Genius: The New Science of High-Performing Organizations by Rich Karlgaard, Michael S. Malone
Never Sorry: A Leigh Koslow Mystery by Edie Claire