Read A Knight to Desire Online

A Knight to Desire 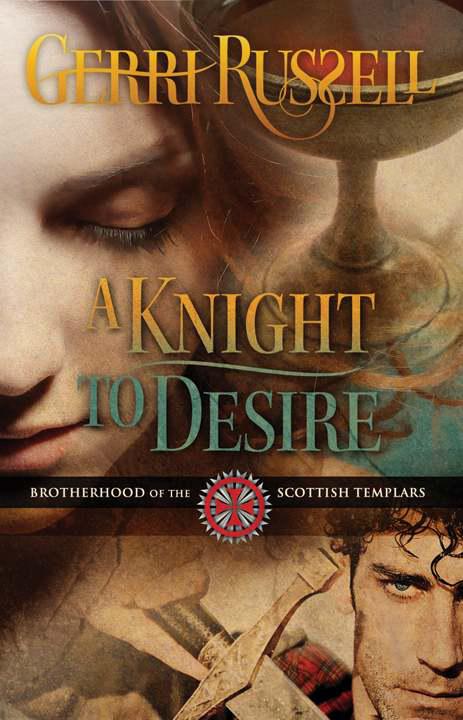 "A superb end to a strong saga." ~
Genre Go Round Reviews

"The sweeping story of a powerful love born in the crucible of war and duty. I couldn't put it down!"
~Alexis Morgan, author of My Lady Mage, book 1 of the Warriors of the Mist

The artifacts were legendary--the sword of Charlemagne and the Holy Grail. And now they were gone, stolen by those who hoped to use their mystical powers to destroy Scotland.

Sensuous as sin and wild as the Highlands, Sir Simon Lockhart must reclaim the treasure while protecting his fellow Templars against a madman who wants to wipe out the order and guarding his heart against a red-haired beauty whose greatest wish is to run headlong into danger.

Brianna St. Clair had trained nearly her whole life to be a knight and is haunted by premonitions of a terrible battle. It's these very visions that Simon hopes will lead them to the treasure and the traitor. But while Brianna can wield a sword as well as any man, she has no defense against the seductive pull of... A Knight to Desire.

"If you love fast-paced adventure and red-hot romance
A Knight to Desire
is the book for you!"
~Joleen James, Award-Winning Author

"Nobody writes Templar Knights like Gerri Russell! With pages full of sword-swinging adventure, sizzling romance, exciting treasure-hunting, and blood-thirsty villains, there's no putting this book down once you start reading."
~Ann Charles, Award-Winning Author of the Deadwood Mystery Series

This is the final book in the Brotherhood of the Scottish Templars series. The order is:

Book 1: To Tempt a Knight

Upon his return to Scotland from the Crusades, a Templar knight is charged with finding a vital holy relic and protecting the daughter of its former guardian.

A Templar knight and a princess go on a hunt for the legendary Ark of the Covenant that takes them from the scorching desert of Jerusalem to the heathered highlands of Scotland.

To protect his sisters from disaster, a Templar knight returns home to his Scottish estate to assume the family's earldom little expecting to inherit a bride in the bargain.

Book 4: A Knight to Desire

Sir Simon Lockhart and Brianna Sinclair must reclaim the sword of Charlemagne and the Holy Grail while protecting the Templar Order against a madman who will use the artifacts' mystical powers to destroy Scotland.

A Knight to Desire

Some people come into our lives only briefly, others come in and stay forever. April Rickard, you are a joy, a friend, and the sister I never knew I had. You are so very appreciated and loved.

So it might be said of two such historical artifacts: The cup of Christ and the sword of Charlemagne. One gives eternal life, the other ultimate power.

What happens when two such artifacts fall into the wrong hands?

Perhaps that is when fact and legend become fiction…

The abbess leaned back in her hard chair and folded her hands serenely across her stomach. She asked the same question she always asked, "Are you prepared to admit to the sins of stubbornness and pride?" The older woman didn't smile, but there was nothing harsh in the lines of her face when Brianna Sinclair took a quick glance.

"No, Reverend Mother," Brianna answered, just as she did every morning.

The abbess didn't sigh. She leaned forward once more, and perhaps now her face appeared a bit softer. "Brianna, tell me why you should remain here among us?"

Brianna startled at that. She was used to lectures about willingness, and the patience to accept what God had sent her way, and surrendering to His will. But this, however kindly couched, was a threat. "Reverend Mother, I must remain here. My father will not take me back into his house until I learn to act more like a lady should."

The abbess waved her claim away. "We do not teach young women to become ladies here. We teach them to honor God."

"Dear child, I have watched and waited, and I must tell you I see no change in your heart. No ability to bear what must be borne. No trust that God has set your feet on a new path."

Brianna did not let her anger show on her face except for the uncontrollable flush of red that flooded her cheeks. She struggled for a long moment, then managed to state calmly, "I cannot admit to stubbornness and pride because I have been forbidden to lie."

This time Mother Superior did sigh. She shook her head, but her features did not fill with repudiation as much as weariness. "You still believe it is God who gifted you with the skill of a warrior? And with the … visions?"

Brianna did not glance up again, did not show the abbess that her face had set with determination. "I do."

The abbess tapped the simple table between where she sat and Brianna knelt, the latter's hands pressed together in the aspect of petition. The abbess sighed again. She sat silent a long time, long enough for Brianna to have to ignore the ache of her knees against the hard stone of the floor.

"Would that I could declare this is not God's touch. Would that I could call it the Devil's work," Mother Superior muttered. She tapped the table again, harder, before abruptly ceasing in order to lean back in her chair once more. "Yet even if I did not wish to honor your father's wishes — which I uphold as an example of that good man's mercy and patience — I must declare for myself that I have never found you to be a liar or a braggart."

In her surprise, Brianna forgot to keep her gaze down. "You believe me, Reverend Mother?"

"I believe God gives us wit and will," the abbess snapped. This was more like her usual manner and Brianna's gaze retreated to the floor. "I believe the words I have heard from your lips, not least because I have seen those words come true. I have asked myself why I, like St. Thomas, was made to see proof? Can I say these visions come from God? No. But neither can I claim ill has come of them, not discontent, nor discord." She considered for several beats, not looking terribly happy about her claims.

Brianna wanted to blurt out that Sister Agnes's life had been saved because she'd dreamed of her weighted down by her heavy skirts, drowning in the mill pond. Or that the sisters had come to Agnes's aid just in time because Brianna had confessed her dream to the abbess. She wanted to call out a dozen other examples of how her visions had aided the convent. But she knew better. She did not want unhappiness or uncertainty to cloud Mother Superior's face further, so she kept silent.

At last the abbess spoke again. "Regardless, I have been charged with your care. To see to your well-being, in your person and your faith. As I say, despite your willfulness and your inability to be meek, I believe your heart is good." The abbess paused, perhaps embarrassed, but she went on. "Your heart is strong, and it could be loyal if given the right motivation."

For the first time since her father had sent her to the convent, tears formed in Brianna's eyes. "
Could be
? Have I not proved loyal to the order?"

Mother Superior stood and came around the table. She put a hand on Brianna's shoulder, giving silent permission for the younger woman to meet her gaze. "No," she said gently, and went on speaking over Brianna's protest. "Not in your heart of hearts. You have tried, but I am forced to acknowledge it is not your nature to lead a quiet life."

Brianna lowered her head, penitent. "I will try harder. I will pray. And reflect. I will ask for guidance—"

"No, child," the abbess said, her hand squeezing Brianna's shoulder. "Yours is a worldly nature. Do not argue with me. We both know there is something you have yet to confess to me, beyond your prowess with a sword or these visions of yours." She patted Brianna's now stiffened shoulder, and turned to go back to her chair. "I have seen that faraway look in your eyes when you should be concentrating on the Mass." Her gaze met Brianna's fully. "What is it, child? Tell me."

She straightened. Now was the time to tell the abbess the truth. Things could not get any worse than they already were, nor could the abbess think her any more sinful. "God made me the equal to any man with a blade. He gave me eyes to see the feints, the strategies. I move with speed, quickly, silently, more deadly—"

"Do not boast to me of dealing death," Mother Superior said softly, instantly shaming Brianna who fell silent. "While it falls to man, sadly, to raise a sword in His name, to keep the barbarians from the door, it is false to speak of war as glory. Glory belongs only to Him."

"But I do admit, from what I have seen of you practicing in the narthex when you think no one is looking, you appear very skilled."

"I most humbly admit that I am."

"And such skills do not lend themselves to the abbey."