Read A Lady in Defiance Online

A Lady in Defiance 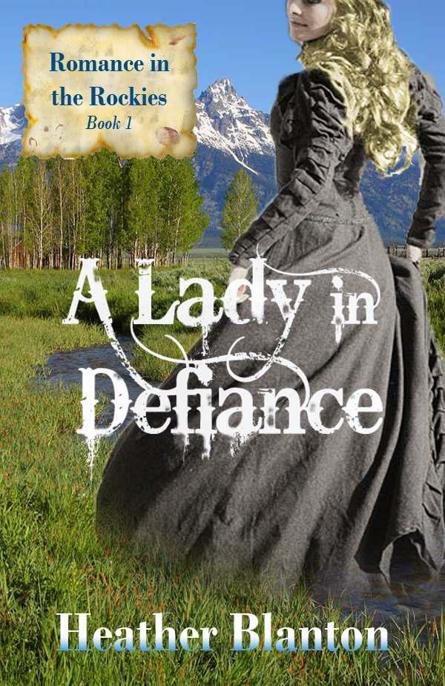 A
Lady in Defiance

Scripture
taken from the HOLY BIBLE,

This
ebook is licensed for your personal enjoyment
only. This ebook may not be re-sold or given away to other people. If you would
like to share this book with another person, please purchase an additional copy
for each recipient. If you’re reading this book and did not purchase it, or it
was not purchased for your use only, then please return it and purchase your
own copy. Thank you for respecting the hard work of this author.

A man's heart deviseth his way:
but the LORD directeth his steps.

They say truth is stranger than fiction. I prefer to say that
truth is more miraculous. What we as authors can make up in our own heads
doesn’t compare to what the greatest writer of all can do. Take for example the
story that inspires my character of Hanna:

In the early 70′s my family used to drive up from
Florida to camp in the mountains. In the summer of ’73, we discovered a
beautiful, sleepy, small town in Western North Carolina. My sister also
discovered a boy there; her soul mate, really, but who would have believed
that? The following summer we moved from Florida to this town and, not long
after, my sister Suzy announced she was pregnant...at the tender age of 15.

I cannot repeat the things my mother said to my sister.
Sadly, while my sister forgave her years later, I don’t think my mother ever
forgave herself. Certainly, my father and most of the locals weren’t much
kinder. Florida trash. Floozy. Slut…you name it, they said it. I can still hear
my mom’s high-pitched, screechy voice as she screamed hysterically at Suzy.

My sister was pushed by both families to have an abortion and
she agreed. How could she refuse? After all, it was pretty clear this would
“ruin her life,” and there was “no future for an unwed mother,” especially
since she would “never claw her way out of poverty.” With prophecies like that,
abortion was a godsend. In the doctor’s office, however, Suzy changed her mind
and said she couldn’t go through with it. The phone rang and it was the father
of the child; he didn’t want Suzy to go through with it, either, but he still
wouldn’t marry her.

Suzy went, instead, to a half-way house in Alexandria,
Virginia to have the baby and give him up for adoption. A month before she was
due to deliver, the father of the baby finally stood up to his father and told
him he loved Suzy and was going to Virginia to get her. Suzy told me years
later that this boy had asked her to marry him much earlier...on their first
date! They were simply meant to be.

The two teenagers were married and God’s plan unfolded for
their lives. She and her husband gave their hearts to the Lord and went on to
have two more children. Suzy matured into a mighty, spirit-filled woman of God,
finished her GED, earned a degree as an R.N., and became a licensed minister in
the Church of God, all while raising children and helping her husband farm. She
was a popular speaker at women’s conferences, went on mission trips and also
worked as a Hospice nurse for over two years. During that time, Suzy led many
people to the Lord, literally some from their death beds.

No one who met my sister was immune to her infectious smile,
vivacious personality, gentle faith, and graceful ways. The love of Christ
literally shined from this woman like a beacon on a hill.

When breast cancer claimed Suzy in 1999, over 800 people
attended her funeral. In a town that twenty-five years earlier had spurned her,
affection poured out. The funeral was standing-room only; former patients wrote
good-byes in the local newspaper; people we hadn’t seen in years called with
condolences. And the “unwanted” baby that was almost aborted grew into a man
who now pastors a church in that same small town.

Suzy is not only the inspiration behind my character of
Hannah, but her story is the reason I know God can take the most grim, hopeless
situation and show us the beauty in it. Profound, miraculous happy endings are
possible when we “let go and let God.”

If you are the mother of a pregnant teenage daughter, I pray
you will think before you speak and then speak with love. If you are the
daughter, please don’t abort that baby. Give God a chance to do what he does
best—bring beauty from ashes. He loves you; he loves that child you’re
carrying. Trust Him to work it out.

Naomi anxiously watched
her husband from her seat in the wagon. John leaned forward in the saddle to
stroke Sampson’s neck and assess the narrow road before them. Little more than
a rutted mule trail, it sliced unevenly across a steep, treeless, mountainside.
The high bank along the left battled to hold back crumbling, jagged rocks while
the right side of the road stalked the edge of a stark, breath-taking cliff.
The edge plummeted several hundred feet to the ground below and then rolled
into a wide, yawning valley surrounded by towering, snow-tipped mountains.

Truly a magnificent view,
but the cliff sent an icy fear slithering up Naomi’s spine. The road was barely
wide enough for a wagon; the wheels would be mere inches away from…nothing.
What would they do if something went wrong? There was no room for
maneuvering.  She knew by John’s hesitation that he was thinking the same
thing.

He turned and looked back
at Naomi and her sisters perched together on the Conestoga, a deep V etching
his brow. She tried a brave smile but realized she was choking the reins so
tightly her nails were gouging into her palms. Perhaps reading her true
feelings, John quickly traded the worried look for a mischievous smirk.

“You’re not scared are
you, Wild Cat? After all,” grinning devilishly, he tilted his hat back and shot
her a cocky wink, “you’re a better driver than most men I know.”

While she appreciated his
attempt to encourage her, today his playful banter couldn’t ease her mind. She
really
didn’t want to make this crossing, but decided to keep her fears to herself so
as not to alarm Rebecca and Hannah. By the looks of them, clutching each
other’s hands and staring at the ledge with wide eyes, they were scared enough
already.

“Would you rather I take
the wagon across?” John asked more seriously as a breeze rustled through his
shaggy blonde hair.

She bit her lip and
pondered the request. Most likely everything would be fine. It was only five
hundred yards or so. Surely they could make it across without any trouble. She
looked out at the valley and saw a lone hawk drifting on the wind, peaceful and
content. She took it as a good sign. “No, I can do this. I’m sure it’ll be
fine.”

She finished the sentence
with a glance at her sisters, looking for their confirmation. Rebecca nodded.
“As long as we don’t look down.” But Naomi saw the trepidation in her eyes.
Hannah nodded, too, though her gaze didn’t leave the cliff.

Naomi circled her
shoulders to loosen the stress and relaxed her grip on the reins. “It’s not
looking
down that worries me,” she muttered.

"Everything’ll be
fine, ladies,” John promised turning back to the road ahead. “Slow and
steady." He prodded Sampson and called over his shoulder, "Keep the
reins slack and the wagon smack in the center of the road." He and the
horse ambled forward, carefully pacing the mules behind them. After several
slow, tense yards, John fell into an easy rhythm with the sway of Sampson’s
body and Naomi breathed a little easier, too. Yes, this wasn’t so bad.

Cautiously letting go of
her fear, she swung her eyes again to the majestic view beside them. Jagged,
white-tipped mountains clawed the cloudless, azure sky; slender Ponderosa pines
and perfectly reflective alpine lakes dotted the rolling green hills below. A
distant river of shimmering, blue water snaked its way through the valley’s
heart. Above them, the hawk dipped and spiraled on the breeze, frolicking in
the glorious playground.

Naomi savored the gentle
July sun on her shoulders and thought, with a little satisfaction, how folks
back in North Carolina were already basking in intense heat and humidity. She
for one was happy to be cradled in these high mountains and wondered if they
might find a campsite near that river tonight. The possibility of a bath was
positively intoxicating.

More than happy to let
such trivial thoughts draw her away from thinking about that ledge, Naomi absently
noted the small rock outcropping ahead but paid it no mind. It wasn’t intrusive
enough to alter John's or the wagon’s path. Instead, she appraised her sisters
out of the corner of her eye and appreciated how the journey had agreed with
them. Neither of the three much cared for bonnets and, as a result, they all
had a little too much sun on their faces, especially their noses. Hannah's
hair, like her own, had turned the color of wheat in late summer and even
Rebecca's dark hair flashed hints of caramel. The ladies back in Cary would
have been scandalized by their earthy appearance, worn calico dresses and lean
bodies carved by three months on the trail—lean, except for the slight rounding
of Hannah's stomach, that is.

Dirty faces and all, they
weren't very pretty right now and Naomi couldn't have cared less. She was done
worrying about what scandalized who. California was their chance to leave all
that behind.

A clean slate was
especially important for Hannah. No one there would know the
son
of a
rich banker had led her on, lied to her, promised her the moon and then left
her alone with a child on the way. No one had to know the
rich
banker
had offered Hannah money to leave town and never contact his son. Of course,
she hadn’t accepted, but the handwriting was on the wall. Their lives in Cary
were over. John’s brother Matthew had been inviting them out to California for
years. Unanimously, they had agreed to go West.