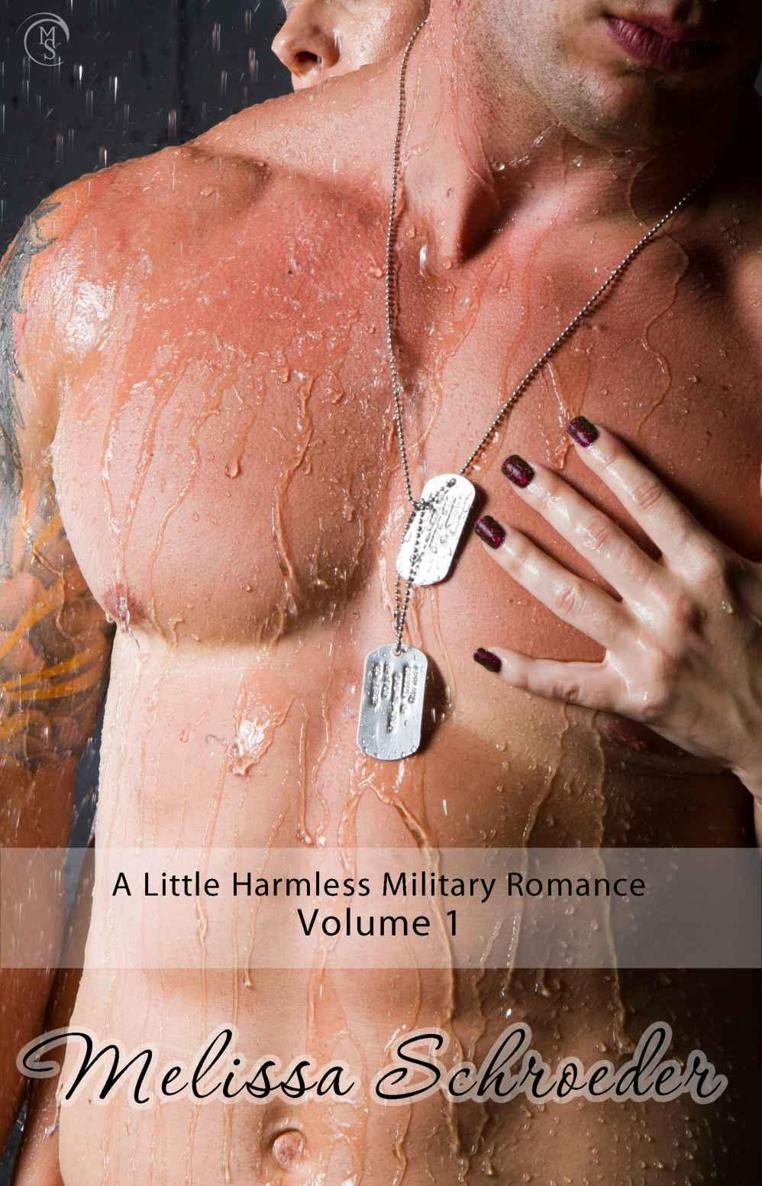 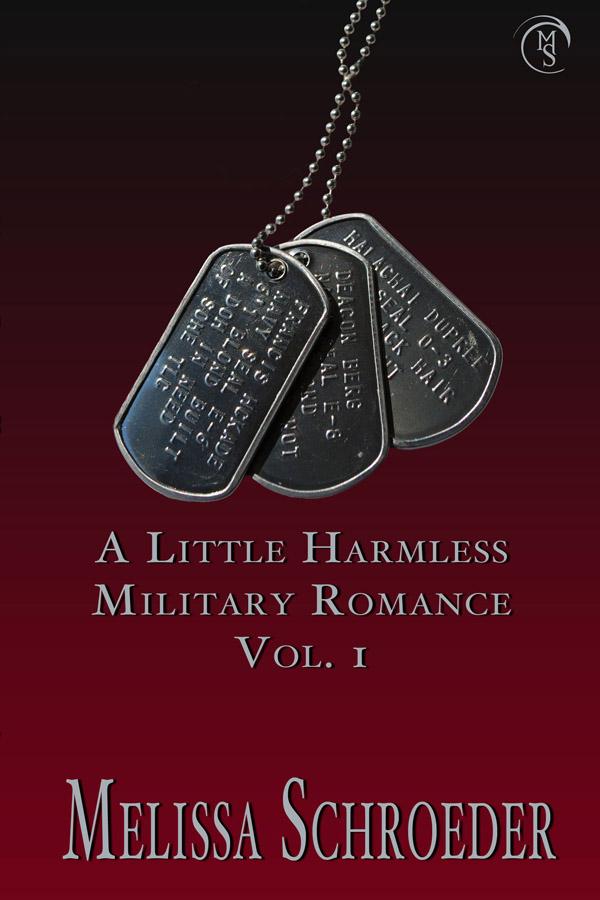 Praise for the Military Harmless Series

Infatuation is overflowing with passion and fire! Kade and Shannon are sizzling together in and out of bed.

This story is a balance of fun, flirty and panty melting sexiness…

This story had me enthralled from beginning to end.

Words of Wisdom, A rating

I love not only their sexual chemistry, but their passion for everything! Can’t wait to read the rest of this series, because the supporting characters are absolutely great too!! I highly recommend this book!!!

POSSESSION was romantic, fun and very sexy. I sat down to read this and didn't look up again until I was finished, much to the chagrin of my husband and kids. But when I sit down to read one of Melissa Schroeder's books, she traps me in her world every time!

To prove her love and save her man, she has to go above and beyond the call of duty.

Francis McKade is a man in lust. He’s had a crush on his best friend’s little sister for years but he has never acted on it. Besides that fact that she’s Malachi’s sister, he’s a Seal and he learned his lesson with his ex-fiancé. Women do not like being left alone for long months at a time. Still, at a wedding in Hawaii anything can happen—and does. Unfortunately, after the best night of his life, he and Mal are called away to one of their most dangerous missions.

Shannon is blown over by Kade. She’s always had a crush on him and after their night together, it starts to feel a little like love. But, after the mission, Kade never calls or writes and she starts to wonder if it was all a dream. Until one night, her brother Mal drags him into her bar and grill and Shannon gets the shock of her life.

Kade isn’t the man Shannon knew in Hawaii, or even the last few years. Twelve hours of torture changes a man, especially one who had never felt so vulnerable. He still can’t shake the terror that keeps him up at night. Worse, he is realizing that the career he loves just might be over.

Shannon is still mad, but she can’t help but hurt for the man she loves. He is darker, a bit more dangerous, but beneath that, he is the Kade she’s known for so many years. When he pushes her to her limits in the bedroom, Shannon refuses to back down. One way or another, this military man is going to learn there is no walking away from love—not while she still has breath in her body.

WARNING
: This book contains two infatuated lovers, a hardheaded military man, a determined woman, some old friends, and a little taste of New Orleans. As always, ice water is suggested while reading. It might be the first military
Harmless book, but the only thing that has changed is how hot our hero looks in his uniform—not to mention out of it.

To the men and women of the United States Military. Thank you for your sacrifice, your courage, and your commitment to our country.

And to the families and loved ones who keep the home fires burning. You are the heart and soul of the military.

I can finish no book without the help of the wonderful support system I have.

Brandy Walker, woman, you know that I would never be able to keep up with everything without. And yes, dammit, I LOVE those lists.

Thanks to Kris Cook, Ali Flores and Joy Harris for the wonderful Harmless in Savannah that gave me the break I needed.

Les, who still hasn’t learned how to waltz, but I still love you anyway.

And to the people behind the scenes:

Chloe Vale who worked overtime to get the book edited.

April Martinez for doing the formatting.

I could not have done this without your help. Thank you.

The sound of Hawaiian music drifted lightly through the air as Kade took a small sip of his beer. He stood on the side of the dance floor watching the wedding guests. It was one of those days Hawaiians took for granted he was sure, but Kade didn’t. The sweet scent of plumeria tickled his nose, and the sound of the ocean just a few hundred yards away combined with the music to ensure that the entire day seemed magical. The groom, Chris Dupree, smiled like a man who had just finished Hell Week with honors, while his new bride, Cynthia, glowed with more than that “happily just married” glow. Her gently rounded tummy was barely visible, but everyone knew she was pregnant.

“Never thought he would settle down,” Malachi, Chris’ brother, said from beside him. One of Kade’s best friends, Mal had dragged him across the Pacific Ocean to make the wedding.

“Really? He’s been with her for years. It only took him this long to convince her to marry, right?”

Mal laughed and took a long drink out of his bottle.

“Ain’t that the truth,” Mal said, New Orleans threading his voice. Their friendship was an odd one, that was for sure. Mal had grown up as part of a huge family in New Orleans, and was half creole. The name Dupree meant something in circles down there, especially in hospitality. Francis McKade grew up the child of Australian immigrants, both scientists recruited to work for the US Military.

“At least there are lots of lovely ladies here for the picking,” Mal said, his gaze roaming over the crowd. “There’s something about Hawaiian women, you know?”

Kade said nothing but nodded. He wasn’t particularly interested in most of the women today. The woman he wanted set off signs of being interested in him, but she had never acted on it.

“Are you two flipping a coin to see who gets what woman?”

The amused female voice slipped down his spine and into his blood. Before turning around, he knew who she was. Shannon Dupree, youngest sister of his best friend, and the woman who had starred in most of his most vivid sex dreams. He turned to face her, thinking he was ready for the impact, but of course he wasn’t. As usual, she stole his breath away.

She was dressed in red, the main color of the wedding. The soft material draped over her generous curves. Shannon was built like Kade loved his women. Full hips, abundant breasts, and so many curves his fingers itched to explore. Every time he was near her, he had to count backwards from ten and imagine that he was taking a shower in freezing water. Sometimes that worked.

“What makes you think we’re doing that?” Mal asked.

One eyebrow rose as she studied her brother. "I’ve known you for twenty-eight years, that’s how I know.”

Shannon turned to Kade expectantly, and he couldn’t think. Every damned thought vaporized. It was those eyes. Green with a hint of brown, they were so unusual, and they stood out against her light brown skin. He could just imagine how they would look filled with heat and lust.

He finally cleared his throat and mentally gave himself a shake. Staring at her like a fifteen-year-old with a crush wasn’t really cool. "Don’t lump me in with your brother, here. He doesn’t have any standards.”

“Except for that stripper last time you visited?”

There was a beat of silence. “Stripper?”

“Mal ratted you out.”

He gave his friend a nasty look. His last visit to New Orleans hadn’t gone that well. Shannon had gotten very serious about her current boyfriend, and there had been talk of them moving in together. Kade had done the one thing he could to ignore the pain. He got drunk and went out to strip clubs. And Mal had been the one with the stripper, not him.

“I think your brother had that wrong.”

She glanced back and forth between them. “Whatever. Just make sure you stick around for some of the reception before you go sniffing any women.”

“Don’t worry about me. Your brother has the impulse control problem.”

Mal grunted. “Both of you suck.”

“They’re going to be cutting the cake soon, so at least hold off until then, could you?”

With that she brushed past them, and he could smell her. God, she was exotic. Even with all the scents of Hawaii surrounding him, hers stood out. Spicy, sweet...

He took another pull from his longneck bottle, trying to cool his libido.