Read A Lizard In My Luggage Online

A Lizard In My Luggage 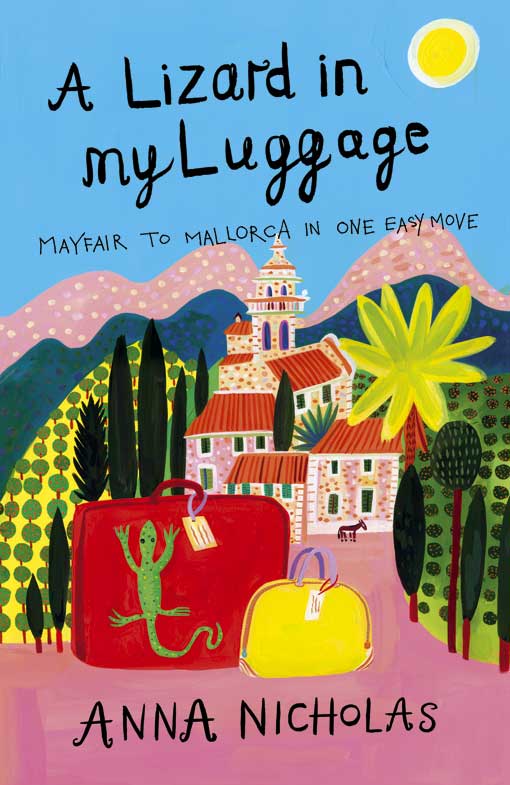 A Lizard in My Luggage
Mayfair to Mallorca in One Easy Move
Anna Nicholas
A LIZARD IN MY LUGGAGE
Copyright Â© Anna Nicholas 2007
This eBook edition published 2011
All rights reserved.
The right of Anna Nicholas to be identified as the author of this work has been asserted in accordance with sections 77 and 78 of the Copyright, Designs and Patents Act 1988.
Condition of Sale
This book is sold subject to the condition that it shall not, by way of trade or otherwise, be lent, re-sold, hired out or otherwise circulated in any form of binding or cover other than that in which it is published and without a similar condition including this condition being imposed on the subsequent publisher.
Summersdale Publishers Ltd
46 West Street
Chichester
West Sussex
PO19 1RP
UK
www.summersdale.com
eISBN: 978-0-85765-298-0
For Marvellous Merzle,
without whomâ¦
Acknowledgements
In having completed this book, it would be inadmissible of me not to mention a handful of kind and patient souls who have encouraged, chastised and galvanised me into action. I thank my dear friend Alice Hart-Davis and literary agent, Stephanie Cabot, for setting the ball rolling, Kate Cook for unlimited inspiration, and Paul Richards for his wisdom and editorial prowess. Thanks are extended to Guillem Puig for correcting my childlike Mallorcan, and to the one and only Sari Andreu for being Sari.
I would like to thank Roger Katz for backing an untried horse, and Pere and Margarita Serra, the proprietors of the Serra Newspaper Group, for their unwavering generosity. Also, thanks go to IgnacÃ­o Vasallo, director of TurespaÃ±a London, for his support, and to TomÃ¡s Graves for his book,
A Home in Majorca
, which acted as an excellent point of reference. A special mention must go to Debbie Seaman, author of
The Fearless Flier's Handbook
which has been my trusty companion on many a shaky flight. I am indebted to the Mallorcan community of our mountain valley for their acceptance and friendship. Finally, inestimable thanks to my sister, Cecilia, my nephew, Alexander, and to the two hillbilly boys, Alan and Oliver.
About the Author
As a freelance journalist, Anna Nicholas has contributed to titles such as the
FT
,
The Independent
,
Tatler
and the
Evening Standard
and for the last four years she has contributed a weekly column to the
Majorca Daily Bulletin.
She is a fellow of the Royal Geographical Society and has been an international invigilator for Guinness World Records. She has also organised an expedition to carry a grand piano to a remote tribe in South America, which was the subject of a BBC TV documentary.
Author's note
The local vernacular used in this book is mostly in the Mallorcan dialect. Although Mallorcan is derived from Catalan and is believed to have been spoken for more than five or six centuries, it varies greatly when written. During the Franco era, Mallorcan was forbidden in Balearic schools and this has made it an oral language, reliant on Catalan when transcribed to print. The vocabulary and spelling often vary greatly from village to village in Mallorca. I have taken advice from local language experts and so hope to have accurately transcribed the Mallorcan language to print. However, I apologise unreservedly to any fervent linguists who may care to differ.
CONTENTS
One â Rubble
Two â London: August
Three â Downing Tools
Four â Donkey Work
Five â Watering Holes
Six â London: October
Seven â Plumbing New Depths
Eight â Unearthing Treasures
Nine â London: December
Ten â Fowl Play
Eleven â Animal Rites
Twelve â Breaking New Ground
Thirteen â Toad in the Hole
Fourteen â London: April
Fifteen â Orange Grind
Sixteen â Stone Walling
Seventeen â Restoration

The Pillars of Hercules by David Constantine
Living Backwards by Sweeney, Tracy
Because You Are Mine Part VI: Because You Torment Me by Beth Kery
A Fistful of Horror - Tales Of Terror From The Old West by Kevin G. Bufton (Editor)
All the Windwracked Stars (The Edda of Burdens) by Bear, Elizabeth
Voluntary Madness: My Year Lost and Found in the Loony Bin by Norah Vincent
Immersion (Magnetic Desires) by Unknown
Doomed Queen Anne by Carolyn Meyer
Heartlight by T.A. Barron
Dark Demands 04: Bound to Him by Nell Henderson