A Midnight Clear: A Novel 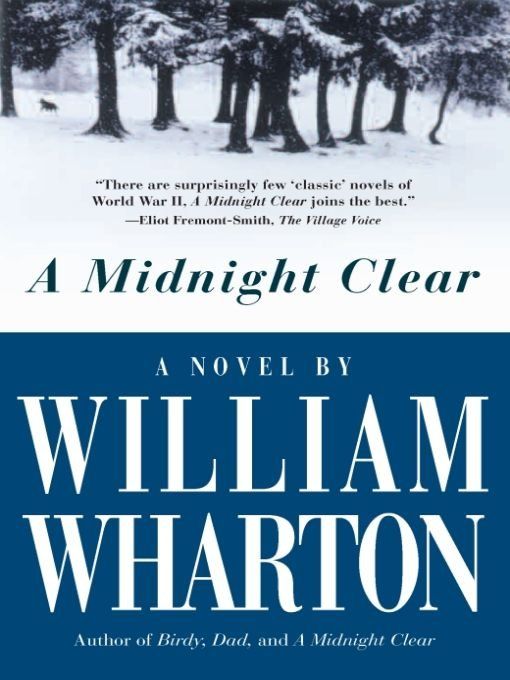 PRAISE
FOR WILLIAM WHARTON’S BOOKS
A MIDNIGHT CLEAR
“[
A Midnight Clear
] is a modest inquiry into war, youth and extinction. It is also remarkable.
—Thomas R. Edwards,
The New York Times
“Wharton’s books could not be about sadder, crazier people and circumstances, and out of the insanity, out of the pain, he lifts ... spirits, teaching... tenderness.”
—
San Francisco Chronicle
“William Wharton has distilled the essence of degradation, of the utter awfulness of battle, into a terse, poetic statement. In its power to surprise and to haunt us, it ranks among the best of our celebrated war stories. I’d put it on the same shelf with Stephen Crane’s
The Red Badge of Courage,
it has mythic quality.”
—
Chicago Tribune
“There are surprisingly few ‘classic’ novels of World War II...
A Midnight Clear
joins the best. Read it. Want to weep.”
—Eliot Fremont-Smith,
The Village Voice
BIRDY
(Winner of the American Book Award for First Fiction in 1978)
“A writer’s triumph and a reader’s delight.”
—Toni Morrison
“It soars!... Part psychological thriller, part mystery... a portrait of a friendship as firm as it is unlikely, and an utterly plausible account of an unbelievable obsession.”
—
Time
“One of the strangest and most memorable stories to come out of America in many years. William Wharton is quite exceptionally gifted.”
—John Fowles
DAD
(A National Book Award nominee)
“This is a great American novel. Wharton’s eye is sharp as an eagle’s; his pitch, perfect; his understanding of the emotions deeply moving. He reaches us, crucially, naturally, where we live.”
—Rebecca Sinkler,
Philadelphia Inquirer
“Splendid... extraordinary ... I don’t know of another novel that treats the relations among several generations in a family during times of crisis with such absolute and convincing authenticity, with such genuine feeling unsullied by the slightest hint of sentimentality.”
—Allen Lacy,
San Francisco Chronicle
“A luminous book.... With each little turn, we see a new facet of forbearance and ineffable love.”
—
Chicago Sun-Times
“For three-quarters of its intensely readable length [
Dad
] is bolted firmly to the ground—and then it takes off into charming, heartbreaking dreams and wish fulfillment without once breaking the slender filament attached to familiar reality. It is a stunningly good book. ”
—Clancy Sigal,
New York Magazine
SCUMBLER
“A marvelously vital novel about the power of the imagination to create and recreate life.”
—Valerie Miner,
Los Angeles Times
“A fascinating excursion into the mind and temperament of an artist.”
—George Core,
The Washington Post
“Scumbler is about the pleasure of creation and the pangs of ordinary existence. Its prose is as exuberant as its subject matter.”
—Doris Grumbach,
Chicago Tribune
EVER AFTER: A Father’s True Story
(Memoir)
“Wharton writes with the skills of a born storyteller...
Ever After
reads like a grippingly dramatic novel, and its blend of sorrow and a healing anger has a bracingly cathartic effect.”
—
Publishers Weekly
(starred review)
“A piercing cry from the heart, a resounding call for reform—and that rare thing: a unique book.”
—
Kirkus Reviews
(starred review)
“A powerful story of devastating loss and spiritual healing... highly recommended.”
—
Library Journal
PRIDE
“Two stories and several meanings of the word ‘pride’ interweave in Wharton’s poetic novel about families, love and coming to terms with reality.”
—
Publishers Weekly
“Mr. Wharton has a special gift for portraying filial relationships, and his portrait of Diċkie and his father... possesses a sweetness and felt emotion that leaves a warm, pleasant afterglow in our minds.”
—Ṁichiko Kakutani,
The New York Times
“Pride
works its magic by allowing the darkest and most threatening forces to invade a luminous and enchanted landscape. William Wharton knows precisely how to cast such spells—and his magic words are extracted dirẹctly from the American grain.”
—
Chicago Sun-Times
By William Wharton
BIRDY
DAD*
A MIDNIGHT CLEAR*
SCUMBLER*
PRIDE*
TIDINGS
FRANKY FURBO
LAST LOVERS
EVER AFTER*
HOUSEBOAT ON THE SEINE*
*Published by Newmarket Press

Copyright
Copyright © 1982 by William Wharton.
Grateful acknowledgment is made to Lewis Music Publishing Company, Inc., for permission to reprint from the lyrics of “The Jersey Bounce,” words and music by Feyne, Plater, Bradshaw, and Johnson. © 1941 Lewis Music Publishing Co., Inc., Carlstadt, N.J. Copyright Renewed. Used by permission.
All rights reserved. This book may not be reproduced, in whole, or in part, in any form, without written permission. Inquiries should be addressed to Permissions Department, Newmarket Press, 18 East 48th Street, New York, New York 10017.
Library of Congress Cataloging-in-Publication Data Wharton, William.
A Midnight clear / William Wharton.
p. cm.
eISBN : 978-1-557-04990-2
1. World War, 1939-1945—Campaigns—France—Ardennes—Fiction. 2. Ardennes (France)—Fiction. I. Title.
PS3573.H32M5 1996
813’.54—dc20
95-25713
CIP
Quantity Purchases
Companies, professional groups, clubs, and other organizations may qualify for special terms when ordering quantities of this title. For information, write Special Sales, Newmarket Press, 18 East 48th Street, New York, New York 10017, or call (212) 832-3575.
Manufactured in the United States of America.
Table of Contents
Title Page
Praise
By William Wharton
Dedication
FEAR
Chapter 1 - Briefing
Chapter 2 - The Longest Night
Chapter 3 - Foo Kit Lur
Chapter 4 - Throw Me a Why Not
Chapter 5 - Don’t Tell Mother
Chapter 6 - A Statement of Charges
About the Author
Copyright Page
Dedication
To those ASTPRers who never reached majority
... We need you now.
FEAR
I gasp in the still of one breath;
A wisp of bird feathers burning,
The smell of death in a flower.
Nothing to see and nothing to say;
Afraid to look, I can’t turn away;
My blink of emptiness pearling gray.
I watch myself watching me watching me.
The names in this
wintry Christmas tale
have been changed to
protect the guilty....
—W.W.
1
Briefing
“Holy God, Mother! What’s the matter?”
He pushes me back hard against my shelter half. He struggles, elbows, presses himself to his feet, boots sinking ankle deep in mud and melted snow at the bottom of our dent. He stands there, looming over me, staggering, slipping, not saying anything; staring into the sky.
Then he unslings his MI, grabs it in his right hand, arches his lean body into a tight spring and tosses that rifle, like a javelin, out of our hole, in a long, twisting arc at least a hundred feet downhill. He throws so hard his metal-rimmed GI glasses fly off his face, bounce against my chest and slide slowly into mud and water. They’re going to get smashed for sure.
He doesn’t look at me. Without his glasses, Mother’s face seems empty; he probably couldn’t see me anyhow, even if he did look.
We’ve been squatting in what could be a leftover one-man trench from World War I, but is probably only a root hole from a rotted, blown-down tree.
Over the past two and a half hours we haven’t said much. We’re on for four. Sometimes I think Mother might be crying but I don’t look; I’m so close to it myself, I don’t want to start anything. Mother’s scrambling now, rifleless, up onto the edge of our hole. He’s pulling at his webbing equipment, trying to unhook it.
Normally, the band would be standing this perimeter guard, but they’re in town with the officers entertaining Red Cross ladies. The Red Cross battled its way up to our regiment yesterday and sold us doughnuts, ten cents apiece, two lines, enlisted men and officers. I didn’t peek to see if officers paid. I bought one and shat it half an hour later.
Squatting there with Mother, I’d been watching one of those little buzzing L
5
artillery observation planes circling over us. The motor has a peaceful sound like an airplane on a summer day at the shore dragging an advertisement saying in the sky. Only now it’s winter and it isn’t peaceful.

I lean down, carefully pick up Mother’s glasses, then shove myself off from the bottom of our hole, pushing against my muddy shelter half. The frame’s twisted but nothing’s broken; the lenses are thick as milk-bottle bottoms; they’d be hard to break. But they’re slippery, gritty, wet and smeared with mud.
Mother’s up on the lip of the hole. Now he’s crying hard but isn’t making much noise. I start scrabbling my way out; I want to pull him back down before someone sees us.
We’re on the side of a hill at the edge of a forest. In fact, we’re surrounded by hilly forests. It’s snowed a few times but green’s showing through today and mostly everything’s either thin hard-crusted snow or mud. I know it’s somewhere around mid-December, but that’s about all. Even though we’re in reserve here, for some reason neither mail nor
Stars & Stripes
has been getting through.
Now Mother takes off. He’s gotten himself unhooked and slings his ammo belt, his pack, entrenching tool, bayonet, canteen; the whole kit and caboodle, looping, twisting through the air, downhill. Just before he disappears into the trees, he flips his helmet, discus-style, off in the direction of his rifle. He acts as if he really is quitting the war!

The Sweetest Kiss: A Billionaire Love Story by Ward, Kate
The Maggie Murders by Lomas, J P
As Birds Bring Forth the Sun by Alistair MacLeod
Alien Child by Pamela Sargent
The Marriage Contract by Lisa Mondello
Too Hot to Hold by Stephanie Tyler
08bis Visions of Sugar Plums by Janet Evanovich
The Greatest Knight by Elizabeth Chadwick
Promise Her by Mitzi Pool Bridges
Winter Wood by Steve Augarde