A Natural History of Love 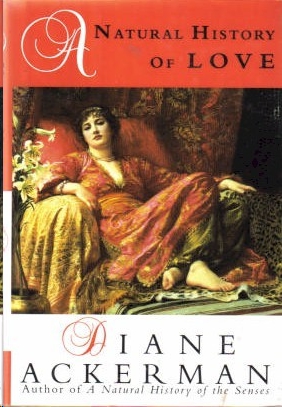 ACCLAIM FOR
Diane Ackerman’s
A NATURAL HISTORY OF LOVE

“By turns playful, serious, poetic and scientific, Ackerman has drawn upon a vast variety of sources to create a compelling compendium of that great intangible, love.”

“In a glorious tumult, Ackerman looks at the siren call of mermaids, the Indy 500, and the ecstasies of a levitating seventeenth-century saint. And her exploration of young girls’ love for horses takes her to Lascaux, where she wonderfully and wonderingly describes the ‘floodtide of horses’ crashing down through our dreams.”

“An atlas through the mysterious ways of the human heart…. Ackerman tackles her subjects with a Sherlock Holmes-ian zeal, employing equal parts philosophy, mythology, history, science, even erotica, to shed light on this most noble of human emotions.”

“Studded with accurate, witty versions of all the facts that made biology class interesting…. A
Natural History
is a wide-angle vision of love—informing, reminding, entertaining.”

“Ackerman’s language is so rich as to be practically carnal…. What throbbing stuff she has gleaned from history’s sheets.”

A Natural History of Love

A Natural History of the Senses

Twilight of the Tenderfoot

The Planets: A Cosmic Pastoral

Diane Ackerman was born in Waukegan, Illinois. She received her B.A. from Pennsylvania State University and an M.F.A. and Ph.D. from Cornell University. Her poetry has been published in many leading literary journals, and in the books
The Planets: A Cosmic Pastoral
(1976),
Wife of Light
(1978),
Lady Faustus
(1983),
Reverse Thunder: A Dramatic Poem
(1988), and
Jaguar of Sweet Laughter: New and Selected Poems
(1991).

Her works of nonfiction include, most recently,
A Natural History of Love
(1994);
The Moon by Whalelight and Other Adventures Among Bats, Crocodilians, Penguins, and Whales
(1991);
A Natural History of the Senses
(1990); and
On Extended Wings
(1985), a memoir of flying. She is at work on a second book of nature writings,
The Rarest of the Rare
.

Ms. Ackerman has received the Academy of American Poets’ Lavan Award, and grants from the National Endowment for the Arts and the Rockefeller Foundation, among other recognitions. She has taught at several universities, including Columbia and Cornell, and she is currently a staff writer for
The New Yorker
.

For George,
whose heart is bright as summer

Grateful acknowledgment is made to the following for permission to reprint previously published material:

Doubleday, a division of Bantam, Doubleday, Dell Publishing Group, Inc.:
Excerpt from entry about Ludwig van Beethoven from
Encyclopedia of Great Composers
by Milton Cross. Reprinted by permission of Doubleday.

Some sections of this book (in different versions) first appeared in
Parade, The Condé Nast Traveler, Travel-Holiday, The New York Times Magazine, Allure, The New York Times Book Review
, and
American Photo
. I’m grateful to the editors of those periodicals for their hospitality and encouragement.

A LONG DESIRE: THE HISTORY OF LOVE

My Sister, My Bride

The World of the Citizen King

The Nightmare of Girls

Ovid and the Art of Love

The Birth of Chivalry

The Origins of Courtly Love

The Angel and the Witch

A Return to Courtly Love

THE HEART IS A LONELY HUNTER: IDEAS ABOUT LOVE

Marcel Proust and the Erotics of Waiting

Freud: The Origins of Desire

ALL FIRES THE FIRE: THE NATURE OF LOVE

The Horror of the Ik

Brain-Stem Sonata: The Neurophysiology of Love

The Evolution of Love

The Battle of the Sexes

The Chemistry of Love

The Chemistry of Divorce

A NECESSARY PASSION: THE EROTICS OF LOVE

Fire from the Flesh: Why Sex Evolved

The Spice of Life

The Evolution of the Face

Survival of the Cutest

A Fold in the Tent of the Sky by Michael Hale
Celebrity Bride by Alison Kervin
In the Labyrinth of Drakes by Marie Brennan
Saint Kate of the Cupcake: The Dangers of Lust and Baking by Fenton, L.C.
Every Pearl Has Its Oyster by India Lee
The Brightest Night by Tui T. Sutherland
His Arranged Marriage by Tina Leonard
Danger at the Fair by Peg Kehret
Damaged and the Knight by Bijou Hunter
Heavy Duty Trouble (The Brethren Trilogy) by Iain Parke