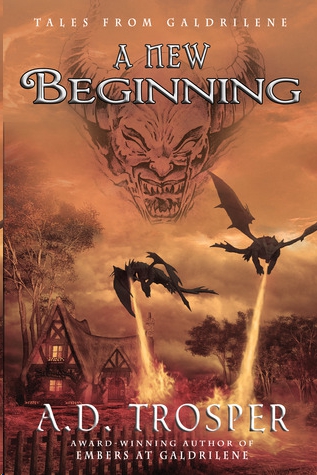 All rights reserved. Except as permitted under the U.S. Copyright Act of 1976, no part of this publication may be reproduced, distributed, or transmitted in any form or by any means, or stored in a database or retrieval system, without prior written permission of the publisher.

This book is a work of fiction. The characters, incidents, and dialogue are drawn from the author’s imagination and are not to be construed as real. Any resemblance to actual events or persons, living or dead, is entirely coincidental.

E
mallya hurried through the chilly evening air and pulled her wool cloak tighter, wrapping it around her slim figure. Unease prickled over her and raised the hairs on her arms. For a moment the air felt oily, and something stirred in her mind.

She paused. The wind tossed her chestnut hair across her face. Pushing it away, she closed her eyes and reached out with her mind.

The gathering darkness felt unusually still. Guards walked the wall of the village; their tension palpable. Something was out there, creeping through the night-shrouded grasslands beyond the town. A nervous knot settled in her stomach. Whatever it was, she prayed to the Fates that it wouldn’t strike tonight.

Except Emallya knew better. She
felt
them. Her mental powers grew stronger by the day. Soon, she would have to seek passage to Galdrilene and begin training. Already, her mother was the only one she could touch without being overloaded by thoughts and emotions.

In her sixteen years, Emallya had wanted nothing more than what her mother had; a comfortable house, a loving husband, and many children.

She gave herself a mental shake and started walking again. Her mother needed the Healing mage. Now was not the time for childish dreams and wishes. Some things were not meant to be and that was that.

The neat little house with its well-maintained garden came into view, and she followed the narrow path through the many plants to the door. A black-haired woman with green eyes answered her knock. Though young for her station, the mage wore the bright yellow robes of a senior mage.

Araina nodded and grabbed a small leather bag from a table next to the door. “Your mother’s time has come then?” Though it wasn’t a question, Emallya nodded.

The Yellow wasted no time talking; instead, she moved down the path with such quick, purposeful strides that Emallya had to trot to keep up.

As they neared Emallya’s house, chaos shattered the quiet night. Shouts of men and women along the wall, and roars beyond it, filled the air. Bells clanged in warning; a sound that was altogether too familiar.

Her father yanked open the door. Dressed in full battle gear, he paused long enough to place a comforting hand upon her shoulder. “Take care of your mother and siblings. Keep a sword with you.” And then he disappeared into the night, running toward the sounds of battle.

As the Yellow swept through the front room and into the nearest bedroom, Emallya moved throughout the house extinguishing lamps and candles. It was routine anytime the bells tolled.

Shendal, her twin brother, helped her gather their younger brothers and sisters and herd them into the room where her mother lay. They needed to stay together in case the conflict spilled into the village.

Emallya clasped her mother’s hand and tried not to tremble as the sounds of battle drew closer. Tallayna squeezed her hand and panted through another contraction.

Light flickered over the darkened room, casting her mother’s face in an orange glow. Emallya wiped Tallayna’s forehead with a damp cloth and glanced out the window at the flames that engulfed their neighbor’s home. The wings of a low-flying dragon whipped the wind around the outside of the house, and dust swirled past the window. More fire lit up the night, alternating between the bright orange of the Guardian Dragons and the sickly green of the Shadow Dragons. Mages worked together from the ground, wielding their magic against the attacking Kojen and Shadow Riders.

Though battles were a way of life, they had never carried into the village before. Nestled in the grasslands not far from the capital, they had always been buffered by the border towns from the worst of the attacks.

A soft hum whispered through her mind, and Emallya nearly jumped off the bed. She froze, holding her breath while she waited to hear it again. Comforting and crooning, she heard its sweet call and her heart leapt. She was
called
. It wasn’t anything she expected, or even wanted, but there was no denying it. Now Emallya understood the stirring she’d felt in her mind. She would be going to Galdrilene for more than mage training.

Emallya glanced out the window again, watching men and women fight Kojen in the light of the fire. She was called, but would she live long enough to answer it?

Tallayna stifled a groan, her face wet with perspiration. Emallya read the fear in her mother’s mind. A deep terror that she might die before giving birth, and if the battle carried into the house, that she would be helpless to defend her other children.

“You must be quiet.” The Yellow’s urgent tone confirmed the fear that Emallya sensed in her as well. Newly arrived from Galdrilene, the senior mage had faced Kojen only once before. Emallya would never forget the stark terror that had filled the woman’s face a week earlier when the Kojen came within sight of the walls.

The emotions emanating from everyone in the room combined together and crept inside her until a dull ache spread through Emallya’s head.

Tallayna nodded but groaned again as she bore down with the urge to push. Emallya’s heart thundered in her chest. The clang of steel now echoed outside the house. She glanced at the sword next to the bed. Although her father had spent some time showing her how to use it, she wasn’t good with it. A sword wasn’t something she’d ever had the desire to use.

The front door shuddered under a heavy blow. Tallayna gasped, her eyes wide. Quiet whimpers broke out among Emallya’s younger siblings. She looked at their huddled forms. Only Shendal stood apart from them. He held a sword in his hands and braced his tall, wiry frame between the door and their younger brothers and sisters.

Something slammed against the door again. The wood shook, and the hinges creaked. Emallya pulled away from her mother and grabbed the sword next to the bed in her sweaty palms.

The Yellow whispered prayers to the Fates, frantically trying to wipe away blood and birthing fluids. She looked up at Emallya as terror pooled in her wide eyes. “I have to get this cleaned up. They will smell the blood.”

Emallya shook her head. The mage needed to get it together. “Then you might as well quit trying to wipe it away and concentrate on catching the babe when it comes. They will smell it anyway, and it is not as if my mother can stop giving birth.”

She walked past the woman and out of the room. Her brother followed, closing the door to the sleeping room behind him. Emallya planted her feet and braced herself, trying to calm her racing heart as the front door shuddered again. The wood splintered. Emallya glanced at her brother. “We cannot let them get past us, no matter what.”

The door shattered and pieces of wood flew into the room. They both waited anxiously as they stared at the ruined doorway. At first, only smoke filled the night beyond. Confusion mixed with tension poured through Emallya. She blinked against the sting of smoke, her sword tip dipping toward the floor. A snarl rippled through the air as a Kojen moved into the room, the wood planks of the floor creaking under its massive weight. Emallya froze, her breath catching in her throat when it lifted its face and sniffed the air. Firelight flickered over its dark purple skin and reflected off the stained steel of its sword. The heavy curled horns on its broad head brushed the ceiling. It issued an earsplitting roar, revealing sharp canine teeth.

Shendal moved first, leaping to meet the creature. More Kojen came out of the night, filling the house with their stench. Emallya brought her sword up, deflecting the solid blow of the second Kojen and staggered back, her arms vibrating from the impact. The weight of its mental attack came up against her mind’s walls and it struggled to maintain them. Now she had to fight the enormous beast on two levels.