Read A Plunder of Souls (The Thieftaker Chronicles) Online

A Plunder of Souls (The Thieftaker Chronicles) 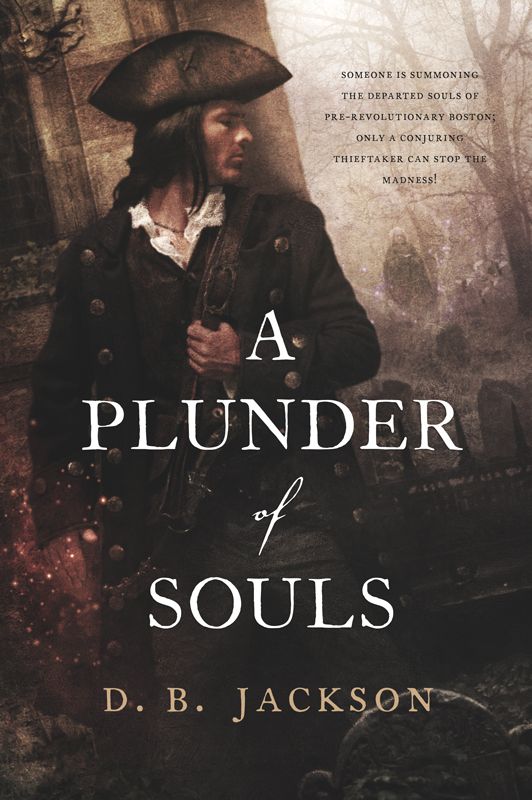 For Faith Hunter and Misty Massey

Map: A Plan of the Town of Boston

Ethan Kaille Novels by D. B. Jackson from Tor Books

Ethan Kaille knew that he was followed. Like a fox running before hounds, he sensed Sephira Pryce’s toughs bearing down on him, snarling like curs, determined to rob him of spoils he had claimed as his own.

Even as the men closed on him, he himself pursued a thief who had stolen a pair of ivory-handled dueling pistols from a wealthy attorney in the South End. His quarry, Peter Salter, led him out along Boston’s Neck, the narrow strip of land that connected the city to the causeway across Roxbury Flats. British regulars had established a guard post at the town gate, and so before reaching the end of the Neck the young thief turned off of Orange Street to cut across the barren leas that fronted the flats. Ethan could see the pup ahead of him, wading through the grasses.

The western horizon still glowed with the dying light of another sweltering summer day, and a thin haze shrouded the quarter moon and obscured all but the brightest stars in a darkening sky. Not a breath of wind stirred the humid air, heavy with the sour stink of tidal mud; even with the sun down, the heat remained unabated. The city itself seemed to be in the throes of ague.

Ethan’s sweat-soaked linen shirt clung to his skin, and his waistcoat, also darkened with sweat, felt leaden. His usual limp grew more pronounced with each step he took, the pain radiating up his leg into his groin. He hoped that the sound of his uneven gait wouldn’t alert Salter to his pursuit, or allow Sephira’s men to locate him too soon.

If not for the concealment spell Ethan had cast, making himself invisible to all, Sephira’s toughs might have spotted him from a distance, and Salter would have needed only to glance back to see him. Still, Pryce’s men dogged him, whether directed by his tracks or by Sephira’s uncanny knowledge of all that he did, Ethan could not say.

Ahead, the young thief slowed, then halted. He surveyed the ground before him, turning a slow circle. After a few seconds of this he let out a soft cry and strode forward with greater certainty, taking three or four steps before stopping again and dropping to his knees.

Ethan crept after him, placing his feet with the care of a deer hunter, and drawing his blade with a whisper of steel against leather. He could barely see Salter, who was hunched over, no doubt digging up the goods he had stolen. The pup was of average height and build—much like Ethan—but he had a reputation as an accomplished street fighter. If Ethan could avoid a fight he would. He knew, though, that the chances of this were slim.

He continued to ease toward the man, but as he drew within a few yards, his bad foot caught on a clump of grass and he stumbled. He managed not to fall, but at the sound Salter leapt to his feet.

“Who’s there?” he called, brandishing a flintlock pistol.

Ethan cursed under his breath. Since the beginning of the city’s occupation by British troops the previous autumn, it seemed that every man in Boston had taken to carrying a firearm. Every man but him. He scanned the ground at his feet and thought he could see a rock or clump of dirt just in front of him. He squatted, wrapped his fist around what turned out to be a stone, and tossed it a few feet to his left.

It rustled the grass and landed with a low
thump
. Salter pivoted with lightning speed and fired off a blind shot. The report of the pistol echoed across the Neck.

Seeing no one there, the pup blinked once and let the hand holding his weapon drop to his side. Before the thief could do more, Ethan launched himself at him, covering the distance between them in three quick strides and driving his shoulder into Salter’s gut. As they toppled to the ground, the pup flailed at him, using the butt of his pistol as a cudgel against Ethan’s back. But Ethan had the advantage. With Salter pinned to the ground beneath him, he hammered his fist into the man’s jaw once, and a second time. A third blow left the pup addled and unable to fight back.

Ethan rolled off of him and flexed his right hand. His knuckles ached. He took Salter’s pistol, which lay on the ground beside them, and tossed it beyond the lad’s reach. The weapon would have to be reloaded before it could be fired a second time, but Ethan didn’t wish to be hit with it again. He picked up his tricorn hat, brushed a bit of dirt off of it, and set it back on his head. Seeing that a thin trickle of blood ran from Salter’s mouth over his chin, Ethan whispered a spell.

His spell thrummed in the ground beneath him, deep and resonant, and the air around them sang with power. A ghost appeared beside him, like a flame suddenly igniting atop a candle. The spirit, which glowed with the deep russet hue of a newly risen moon, was the shade of an old warrior. He was dressed in chain mail, his tabard emblazoned with the leopards of the ancient Plantagenet kings, his expression as hard and cold as a sword blade. Ethan called the ghost Uncle Reg, after his mother’s waspish brother, though he didn’t know for certain where in his family tree the man would have been located when he lived. So far as Ethan knew, his name wasn’t actually Reg, either.

The ghost was a guardian of the power-laden realm between the world of the living and the domain of the dead. Without him, Ethan could not conjure. Reg regarded Ethan with bright, gleaming eyes, appearing annoyed at having been disturbed from whatever it was he did when Ethan did not conjure. Seconds later, he faded from view.

As the concealment spell Ethan had cast wore off, Salter stirred. He squeezed his eyes shut, opened them again. After a few seconds he tried to push himself up, but Ethan laid the edge of his blade against the pup’s throat. Salter stiffened, his eyes going wide.

“Easy, lad. You wouldn’t want my hand to slip.”

“Who are you?” the pup asked, staring up at him.

“My name is Ethan Kaille. I was hired by Andrew Ellis to retrieve the dueling pistols you pinched from his home.”

Ethan pressed the knife against Salter’s neck and shook his head. “Don’t lie to me, lad. I haven’t much time, and I’ve even less patience.”

The pup hesitated before nodding.

“You intended to sell them tonight? At the Crow’s Nest, perhaps?”

“It’s not exactly a new approach to thieving.”

Salter scowled. “Well, it works for me.”

“You mean it has worked, up until now.”

The scowl remained on the pup’s face, but he said nothing.

“From you?” Salter asked, sounding incredulous despite the knife at his throat.

“Aye, from me. And also from Sephira Pryce. She and her men are on their way here now.”

At that, the thief tried to sit up once more. Ethan pushed him back down and tapped the edge of his blade against Salter’s throat.

“For now at least,” he said, “you still have more to fear from me than from her.”

“She might. I can protect you, but I’ll need some help in return.”

Salter laughed, high and desperate. “How can you protect me from Pryce? I’ve yet to meet anyone who’s a match for her and her men.”

“You’d be surprised,” Ethan said. “I’ve dealt with Sephira for many years, and she hasn’t killed me yet.” He didn’t bother to mention that several years earlier she had killed one thief Ethan tried to protect, or that just the previous fall one of her men had slit the throat of another, though Ethan managed to save this second man’s life. “Now, listen to me. If we work together, you’ll survive the night, and I’ll be paid what I’m owed by Mister Ellis.”

“And what about the pistols I pinched?” Salter asked.

“Those have been forfeit from the moment I learned your name.”

The pup’s mouth twisted sourly. “So, you’re a thieftaker, too?”

Salter narrowed his eyes. “Where did you come from, Kaille? Tonight, I mean. I didn’t see you before; not until I came to.”

Ethan glanced toward the spot where Salter had been digging. “What are the pistols in?” he asked. “A box?”

Salter continued to stare at him. “I’ve heard of your kind,” he said, his voice hushed. “You’re a witch, aren’t you? That’s how you crept up on me, and how you managed to knock me down without getting yourself shot.”

Conjurers didn’t think of themselves as witches. Witchcraft was the stuff of myth and nightmare, a term used by those who possessed no spellmaking abilities to explain powers they didn’t understand. Conjuring, on the other hand, was real. Nevertheless, the better part of a century after the tragic executions of twenty men and women in nearby Salem, so-called witches were still put to death in the Province of Massachusetts Bay. Ethan had hoped to finish this encounter without having to admit to Salter that he was a conjurer—a speller, as his kind were known in the streets of Boston.

“What are the pistols in, Peter?” he asked, hoping to change the subject. He should have known that wouldn’t work.

“I’d wager Miss Pryce would be interested to know that about you. It might be worth some money…” He trailed off, his newfound confidence wilting at the sound of Ethan’s laughter.

“She knows, lad. How do you think I’ve survived as her rival all these years? How do you think you’re going to survive the night?” He paused, allowing the words to sink in. “Now, the pistols?”