Read A Shift in the Air Online

A Shift in the Air 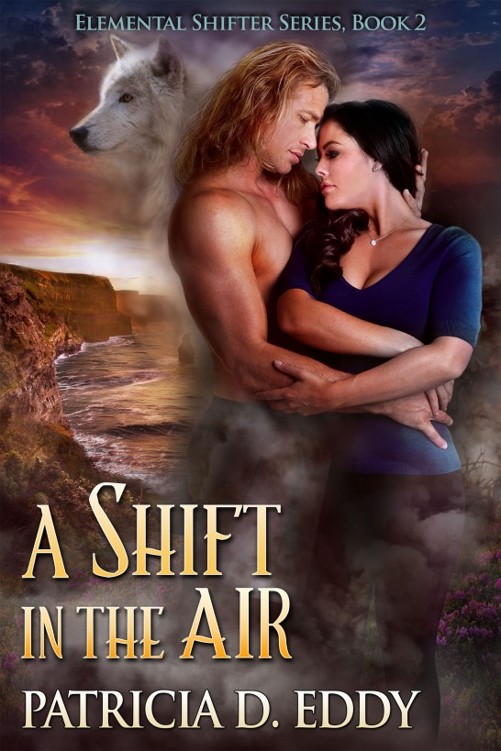 A Shift In The Air

This ebook is licensed for your
personal enjoyment only. This ebook may not be re-sold or given
away to other people. If you would like to share this book with
another person, please purchase an additional copy for each
recipient. If you’re reading this book and did not purchase it, or
it was not purchased for your use only, then please return to
Smashwords.com and purchase your own copy. Thank you for respecting
the hard work of this author.

Get Your Free Book
Now! 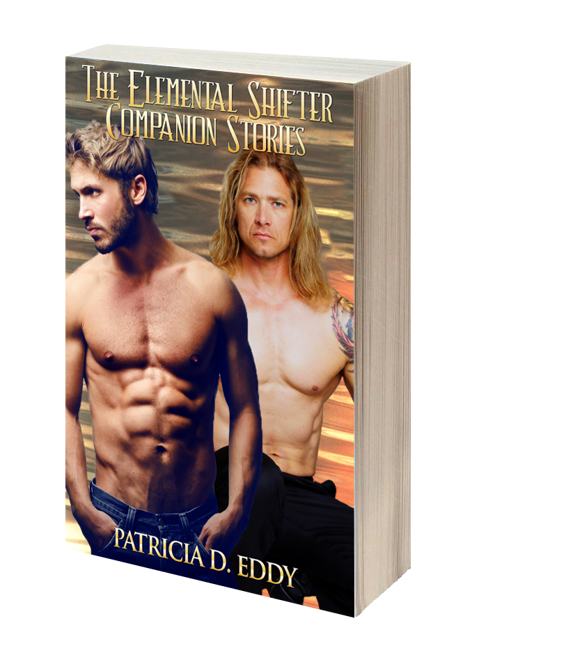 Liam O’Sullivan lost his love, Caitlin
Brannigan, when she killed herself by jumping off the Cliffs of
Moher. Liam aches for a way to keep her memory alive. Will a witch
provide the answer?

When Cade bowman moves to Bellingham
after the death of his father, he’s taken in by a new pack. The
pack’s beta, Liam O’Sullivan has his secrets, but the two find a
common ground in their grief.

The girl dangled her legs over the
edge of the cliff. Below, the waves crashed against jutting rocks,
a bit of spray tickling her bare calves. Stretching towards the
horizon, the water gleamed like jewels in the intense, summer
sun.

His shy smile gave her a thrill. He
was older by almost two years and fascinated with her element.
Years of sneaking off alone after their daily lessons, stealing
moments among the ruins of the old castle at the edge of town, had
cemented their bond. Each tried to outdo the other’s childish
charms—he with earth and she with air.

When he dropped down next to her and
took her hand, she leaned over and pecked his cheek. Her mother
watched from a hundred yards away, working air charms and making
rocks and blades of grass dance. A hint of disapproval tightened
her mother’s lips, and the girl turned and sat up straighter,
staring out over the glittering sea. At fifteen, she’d earned the
right to make her own decisions, hadn’t she? The winds took on a
life of their own on the Cliffs of Moher, swirling and snapping
like an animal caught in a snare.

“
Ye’re the prettiest girl
in all of Ireland.” The boy—his teenage stubble darkening his jaw,
hinting at the man he would soon become—squeezed her
hand.

She blushed. “I’m not.” She was too
thin, though her mother insisted she hadn’t grown into her body
yet. At least her eyes shone with a pretty sky blue, and her full
lips held a gentle pout.

“
I can’t live without ya,”
the boy whispered. “The two years I spent with my da in Scotland
were awful. I thought about ya every day. Letters weren’t enough. I
couldn’t wait to get home and see ya again.”

“
Really?” A wide smile
broke out over her face, and she hid it in her cupped hands, hoping
he wouldn’t think her foolish for being so…girly. She’d cried
bitter tears when he’d left and many nights since. His return the
previous week had brought sunlight back to her world, after what
had felt like an endless night. Her mother had tried to console her
and then convince her she’d find another boy to love, but the girl
only wanted him. And now they were together again.

“
I missed ya too. No one
else understands me. I love my mum, but she wants me to stay in
Doolin forever. There’s a whole world out there.” She flung her arm
out, sweeping over the restless waters. “We could go anywhere,
yeah?”

“
Somewhere new. Exciting.
There are elementals in Rome, yeah?”

The young man beamed.
“
Si
. I’ll take ya
there. And Paris. Barcelona. Even America.”

The tethers of her mother’s apron
strings unraveled at his words. Outside of Doolin, she’d be able to
fly, her element unchecked by the harsh restrictions the local
community imposed: no charms in view of humans and no interacting
with werewolves or practitioners. “When can we go?”

His warm breath tickled her cheek as
he leaned in to whisper in her ear. “Soon. My mum told me about a
special charm before she died. We could be part of one another.
Never alone. It’s more than love. It’s sharing a piece of who we
are. Mum was too afraid. Not with my da. He isn’t a good man. But
ye’re mine. And we could make this work. Ya love me, don’t ya? Ya
want to stay with me?”

“
Yeah.” She blushed and
nodded. Something about the boy with the spiky black hair and dark
hazel eyes intrigued her. He was different. His earth element
thrummed with strength, and he always used his charms to make her
laugh or keep her safe. She didn’t fear being at the edge of the
cliff because between his earth and her air, she’d never
fall.

“
Then let’s do it. I’d have
part of your element. The charm will keep us linked together,
closer than two people have ever been. I’d be stronger, and I’d
protect you. Forever.”

“
And would I have part of
yours too?”

A shadow passed across his face as a
bird soared high overhead. The girl looked up and tracked the
flight, waiting for the boy’s answer.

Caitlin Brannigan stepped off the
curb, her dark brown hair blowing in the breeze. Liam grabbed her
around the waist, pulling her back against him. “Careful, luv.
Dublin’s a wee bit busy at rush hour, yeah?” A bus rumbled by, the
double-decker yellow-and-blue monstrosity careening through the
space Caitlin had occupied seconds before.

“
Feckin’ buses.” She took
the opportunity to snake an arm around him. “Though this is nice.”
Pain edged her voice. The near miss? Desperation tinged her
embrace, and she rested her head against his chest.

Something stirred inside of him. She
smelled like fresh air, spring rain, and fig blossoms. He could
lose himself in her scent. Not for the first time, he wondered…was
she his mate? She wasn’t a wolf, but he wanted her all the same.
The ache of the mating call tensed his muscles, calling from deep
within his bones. Only a week separated him and the full moon, when
the call would become a siren song. Werewolf mating was as much
physical as emotional, and his parents had once described the
experience to him as a pull so strong, you felt the angst with
every breath. He hadn’t believed them until now. But Caitlin was
human. He’d not thought such things possible.

His parents were pureblood werewolves
and had mated in their early twenties. They’d offered to send him
to college in Dublin, but he’d longed for the excitement of the
States. So he’d left—with their blessing, but not their financial
support—and had picked up a job in construction to pay his way.
Four years spent at the University of Washington, and then he’d
moved up to Bellingham to join a pack there and taken a job at the
pack’s small construction company. Now, three years later, he was
the foreman—one step from owning the whole outfit. He’d just hired
a new electrician, another young wolf in his pack, and taken his
first extended vacation in years. Though his parents had visited
him often in the States, he’d always found an excuse not to return
to the land of his birth. The weeklong trip to Ireland had turned
into two weeks, and now three, because of the woman in his
arms.

Two weeks ago, he’d rushed to
Caitlin’s rescue in a popular Temple Bar pub—not that she’d needed
him to. With a sharp right hook, she’d flattened a drunken suitor,
a fine retribution for the beer spilled down her blouse after she’d
rebuffed his advances. Liam had hauled the drunk up and propelled
him towards the door, and the pale, freckled young woman with hair
the color of the finest Irish coffee had looked up at him with such
fire in her sky-blue eyes that he’d immediately asked her
name.

Now those eyes peered up at him,
shining with tears born of the biting wind that howled through the
streets and flapped his military-style jacket around his
hips.

He pressed a kiss to her temple. “It’s
gettin’ cold. Would ya like coffee? Or shall we head to the
pub?”

“
The pub. I’m peckish.”
They’d scarcely taken two steps when Caitlin shuddered and then
clapped her hand over her mouth. “Shite. No.” The horror in her
voice riled his beast. She stumbled, bracing a hand against the
wall.

“
What is it, luv?” He tried
to support her, but she flinched and pulled away.

“
I can’t go with ya, Liam.”
Caitlin took another two steps back, and when she looked up, her
eyes clouded, and silver flecks tangled with the blue. “I can’t
stay.”

“
What? We’ve had such a
grand time. I thought…ya were planning on staying with me. I want
ya to stay with me.” In the two weeks they’d spent together, he’d
found himself well on his way towards loving Caitlin. The previous
night, they’d kissed on Ha’penny Bridge as the stars glittered on
water as still as glass. The gentle caress of her fingers along his
cheek and the raw desire glinting in her eyes…had he mistaken
it?

His eyes narrowed. “A mistake?”
Frustration bristled along his spine. The visceral need to claim
her and to keep her safe sang with the arrival of the full moon
only days away. She cringed as a growl rasped from his throat. She
left a swirling eddy of air in her wake as she darted back, and his
keen nose inhaled her delicious scent.

“
Luv, are ya scared of me?”
The way she’d recoiled had given him pause. Liam towered over her.
Construction was an active job, and Liam didn’t hold with making
his men do all of the work, even if they answered to him now. Add
in the sparring he did with some of the members of his pack on
off-days, and he could easily be mistaken for a prizefighter in a
dark alley. His six-foot-four-inch frame held barely a lick of fat,
and he’d been told his long reddish-blond hair revealed his wolf
long before he ever shifted. He embraced it; he’d always preferred
his locks free, loose, untethered. Much like how the wind ruffled
his fur when he ran in the woods. Of course, the fact that his eyes
were an unnatural green mixed with the gold of his wolf didn’t
detract from his wild appearance, and he secretly enjoyed that
perhaps a bit more than he should. But he hadn’t counted on Caitlin
spooking—not with how she’d shrugged off his assistance that first
day and met his gaze with such raw confidence.

A shake of her head belied the tremble
in her hands. “Not of you. No.”

“
That’s not an answer.
Ye’re scared of something. Scared enough to throw away what we have
without even telling me why. Ya don’t do that to someone ya…” he
caught his lip in his teeth before “love” slipped out, “…care
about.”