Read A Siren's Song (Ride of the Darkyrie 2) Online

A Siren's Song (Ride of the Darkyrie 2) 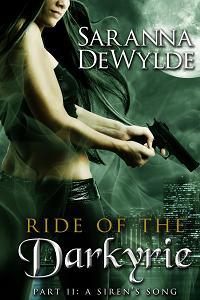 All characters appearing in this work are fiction or from classical mythology now in common usage. Any similarities between persons living or dead is purely coincidental.

Cover design by A. D. Cooper

Thank you so much to my wonderful goddess of a critique partner Jenna McCormick who helped bring this book to life and talked me down from every ledge. There have been many this past month.

Thanks also to Virginia Nelson for her sharp eyes and continued support.

A special shout out to the Moonmoth. You know who you are.

And last, but not least, to all my wonderful readers, reviewers, and friends who’ve helped make this book a success.

“After asking her a few more questions, I went to the precinct to start on the paperwork for the case file. The building lights were dim and most of the staff had gone for the evening, for all intents and purposes, I was alone, but that suited me fine.

I needed to figure out what the killer had done to the bodies. Sarita had said that the girls had been waiting in the room for him the night before, so these girls had died in the last twenty four hours. But the mummification puzzled me. I chewed on every theory I could think of, but nothing made any sense. Much like the last day.

My hand was inadvertently drawn to my chest again, the place where my heart was supposed to be. I felt no steady beat against my hand, and there was no pulse in my carotid.  I had the sudden urge to slice open the veins at my wrist just to see what was there. Would I bleed?  Spurt copious amounts of blood across my desk and the floor in a sticky crimson syrup?

There was only one way to be sure.

I opened my desk drawer and took out the switchblade I’d pulled off a perp and I slit my left arm open from my wrist to my elbow.”

~From Waking the Queen

Ride of the Darkyrie Part I

Strong arms clamped around me like an iron vise and the scent of figs filled my awareness. Not the figs and brine scent from my first encounter with the Cross, but something more sensual and appealing.

There’d been no pain as the blade sliced into my skin and for a moment, the flesh gaped open—clean and smooth like slicing into a ham. Then something welled blue and viscous, spilling forth down my arm and all over the gray carpet.

I was more aware of the strong chest against my back than any sensation from the flesh I’d filleted open as we crashed to the floor.

For the second time in as many days, my body was not my own. I knew lust. Desire.
Want
. I’d had lovers before, but never understood more than the mechanics of it. I’d never felt this draw to another. Until I danced with Jason. Until The Cross tried to kill me.

Maybe this wasn’t ascension and I was insane, infected with whatever disease afflicted my father? My lifeblood spilled out of me and all I could think about was the great strength of this thing that wanted me dead.

The play of the neon light on that skin was hypnotic. I wanted to touch the scars, to trace that beautiful topography of pain.

“You’ll not take away my chance at vengeance by killing yourself before you ascend. I’ve waited long enough for this incarnation,” he hissed.

“I don’t understand,” I mumbled as the cotton weave absorb the cerulean blood that pumped out of my veins even with no heart to push it.

“Jason was stupid to leave you alone. Or perhaps this is what he wanted? His final revenge on your father.”

His words made no sense to me, but suddenly, I heard his voice in my head like my own thoughts. I still couldn’t understand the words, but dark oblivion crept over my consciousness. Instead of the cold embrace of death, it was only sleep in the scalding prison of his arms, and I dreamed.

I dreamed of fire.

A raging, hungry beast that ravaged and consumed everything in its wake—yet for all the savagery, it was elegant.

The fire danced—a prima ballerina dedicated to her craft. Pirouettes,
en cloche
and
maneges
flawlessly executed. So perfect that rather than baking the mud brick walls, it melted them.

Two women fought among the flames. One wore the silver of Valkyrie armor and the other cloaked in nothing but her hair. Talons grew from her fingers and she clawed viciously at her attacker. The snarling of wolves and the screeching of ravens echoed loudly in my ears. The naked one looked over her opponent’s shoulder. She smiled at me—her voluptuous lips pulled back over a predator’s teeth, the tools of a flesh-eater. Then she made a sound unlike any I’d ever heard. It was terrible and awful—the sound burrowing inside of me, but starkly beautiful as well.

A flaming wall fell on the little boy curled in the corner and the burning mud clung to him—a death shroud. The rivers of mud falling away from him took his skin with it and his voice was unnatural, the cries of his pain wrenching inside me the way nothing ever had before. I wanted to go to him, to save him.

But it was only the power of his voice.

I realized this was the Cross, the round-cheeked child with the bronzed Raphaelite features, the wide green eyes and the waves of black hair, all before the fire had stripped him of his beauty, his family.

The woman in the armor was supposed to be me. I recognized myself in the cruelty of her smile, the flat depth of her eyes as she forced the other woman into the flames.

Orange and gold licked at the naked woman’s skin, scorching her in long smooth strips, skinning her alive. She screamed and tall, black quartz monoliths erupted from the earth like daggers, but they didn’t touch their quarry and the power of her voice left the Queen of Hel unaffected.

The siren looked at me again over her killer’s shoulder and smiled even as her face began to run like melted wax. It was as if she was speaking to me in the present as I watched from this dream rather than Helreggin. “My Stavros will kill you, Helreggin. He will come for your heart and when you ascend, he’ll kill you.”

Helreggin laughed and drove her sword into the siren’s chest. “I’ve already ascended. I’m the Queen of Hel. Odin is well rid of you. Your bastard whelp, too.” She laughed again and the fire swayed with her amusement.

She didn’t bother to watch the siren die, but turned her attention to the screaming boy who’d gone quiet. Helreggin lifted him out of the grime, the skin that was left dark and charred. “Well boy, will you kill me?”

He clawed at her feebly and even from my vantage point, I could see the rage in his eyes.

“I look forward to it.” She dropped him in the dirt and laughed again as she opened a small vial. The fire howled for a moment before disappearing into a stream of mist and shimmying into the vial and she tugged something from her ears.

Was this history as it had played out? I still didn’t understand what they had done to deserve this.

I killed. I did it without mercy and without regret, but I didn’t kill those who were innocent and I’d never hurt a child. And I supposed Helreggin hadn’t hurt him directly. It had been his mother’s voice that had brought the walls down. Though I couldn’t deny it had been Helreggin’s fire. No, not Helreggin.
Me
.

Helreggin dropped her sword in the dirt next to the boy. “When you’re a man, come and find me, little siren.”

I was jerked back into the waking world, the floor beneath my back solid and real—the Cross bent over me, his black hair a curtain over his ruined face.

“Wake up, gods damn you.” The power in his voice drilled into me like a thousand needles and I think if I’d actually been dead, I still would’ve had no choice but to open my eyes. “You will not rob me of my vengeance!”

“I thought I couldn’t die unless you killed me?” My voice was raspy and raw. I struggled to sit up and my vision swam. I reached out to brace myself and the closest thing was his arm.  He was so strong; he could have snapped my neck with one hand if he’d wanted to.

He laughed then, low and bitter. “Your pupils dilated and you smell of heat. I could kill you, Darkyrie. I
want
to kill you, to watch the light go out of your eyes.” The Cross leaned closer to me, his gaze intent on my face and my every reaction.

I should have been afraid, but I wasn’t. He’d already said he wasn’t going to kill me. He’d even saved my life. I was still holding onto his arm.

There was no denying that, so I didn’t bother, but instead leaned forward my hands braced on his shoulders. “Maybe I just recognize my own, assassin. You kill, and you like it. Your own pupils dilated, too, when you talked of killing me, of watching the light die in my eyes. I can hear your heart thundering in your chest.” Shit, there it was again. That thing that made me push when I should stop, but this time, I didn’t want to stop. He’d pushed me, I wanted to shove back. “And I bet you’re hard. You can’t separate sex and death anymore, can you?” My whisper ghosted across his ruined lips and he slammed me back down on the ground, his great weight crushing me into the floor.

“I’ll give you the fucking you’re begging for and then I’ll kill you,” he spat.

“Maybe I want to
fuck with you
,” I said, turning his words against him, “because you’re the only one who is stronger than me. Species imperative.”