A Soft Place to Land 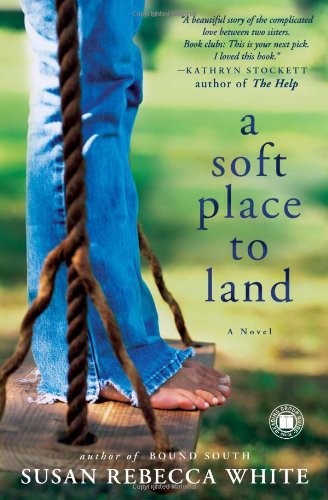 A Soft Place
to Land

All rights reserved, including the right to reproduce this book or portions thereof in any form whatsoever. For information address Touchstone Subsidiary Rights Department, 1230 Avenue of the Americas, New York, NY 10020.

TOUCHSTONE and colophon are registered trademarks of Simon & Schuster, Inc.

To Mom and Dad, whose love remains legendary.

And to Lauren, who taught me to play.

We have not made mud pies for nothing.

A Soft Place
to Land

‘A Place at the Table’ Excerpt

In the months following the accident Ruthie and Julia imagined and discussed the last days of their parents’ lives so often it was almost as if the girls had been there, had accompanied them on the trip out west. Except of course they had not. That had been the whole point of Phil and Naomi’s vacation.

Their plane crashed at approximately 3:00
P.M.
on Wednesday, March 24, 1993, during the girls’ spring break from the Coventry School, where Ruthie was in seventh grade, Julia a sophomore. Most of the well-to-do families from Coventry, which is to say most of the families, were taking vacations together that week, to the mountains to ski, or to the beach to relax by the ocean. Ruthie’s best friend and sometimes nemesis, Alex, was going all the way to London with her parents. But Phil’s caseload at the firm was especially heavy that year, and Julia had so many late and incomplete assignments to finish that she needed an unscheduled week at her desk just to get caught up.

And so no trip for the Harrisons was planned, until Julia’s theater friend Marissa Tate casually mentioned that Julia could come with her to her family’s beach house on Pawleys Island. Phil and Naomi made a show of extracting promises from Julia that she would spend at least two hours a day catching up on
her assignments, but they readily agreed to the trip. Freed of one child, and with Mother Martha—Phil’s stepmom—willing to come stay with Ruthie, they began thinking of a romantic destination for just the two of them.

Phil and Naomi lived for time alone with each other.

Naomi’s favorite place in the world was Paris, in the Sixth Arrondissement, where she would sit for hours in the cafés, drinking espressos, eating pastel-colored macaroons, and observing the sophisticated people around her. In Paris, unlike in Atlanta, caffeine didn’t bother her; she could drink espresso all day and still fall asleep easily at night. Phil’s favorite place was wherever Naomi was happiest, but nearly equal to his love of pleasing his wife was his love of a good bargain. And since there were no bargain plane tickets to be found for a last-minute trip to Paris (he checked), he booked them on a trip to Las Vegas instead, where he got a tremendous deal on their stay at the Mirage and secured tickets for them to watch Siegfried and Roy tame the tigers.

They planned to stay put in Las Vegas for three days. The city’s slightly seedy element was not a deterrent. In fact, it added to the allure of the vacation. How much further could they be from their mortgage-bound life of duty and responsibility in Atlanta than to be playing craps in a flashy casino in the middle of the day after spending the morning in bed? On the fourth day of their vacation, they would venture out of the city, renting a brand-new 1993 cherry red Mercedes convertible that they would use to drive the 270 miles to the Grand Canyon, where years ago Phil and his first wife, Beatrice, had (rather uncomfortably) camped during a cross-country drive to visit his sister, Mimi, who lived in San Francisco.

Naomi would be seeing the Grand Canyon for the first time.

Julia and Ruthie speculated that Phil was probably more excited about driving that new Mercedes than he was about any other part of the trip. Phil was a sucker for cars, trading in his old one every couple of years for whatever was the latest, fastest model he could acquire for a good price. Once he took his
wife to look at a BMW he had bought for a tremendous bargain, many thousands below its Blue Book value. It turned out that the original owner of the car had been killed while driving it, in a multiple-car crash that brought traffic to a stop on I-85 for hours. All his widow wanted was to get rid of the car, fast.

Naomi told Ruthie about accompanying Phil to the body shop to see the car while it was being repaired. Its windshield was shattered and there was a little bit of human hair poking out from one of the cracks. Naomi said that she could never ride in that car without feeling queasy. It was a huge relief, she said, when two years passed and Phil traded the car in for another, newer one.

Phil had made other sketchy deals. Ruthie remembered a time when Phil was late coming home from work and Naomi was agitated because he had not phoned to inform her of the reason for the holdup. Ruthie was already dressed for bed by the time Phil finally pulled into the garage, driving a new black Jaguar. He walked into the kitchen beaming, and to an incredulous Naomi he explained: a Middle Eastern man who had once been his client had phoned him at the office, saying that he needed to sell the car within forty-eight hours, and he needed to sell it for cash.

“I had the cash, babe,” said Phil, standing in his blue suit in the red-tiled kitchen while Naomi glared at him, not even saying a word. “You won’t believe the deal I got.”

The thing about Phil’s deals was this: they usually didn’t save him any money. He would often end up buying even more expensive items than he ever intended to purchase, simply because they were offered at a price below retail value. That was why Julia, at sixteen, was given a brand-new Saab 900. Phil had been planning to buy her one of the old Hondas listed in the automobile section of the
Atlanta Journal-Constitution
when his eye hit upon the lease deal advertised by Saab. At the astonishingly low rate of $288.99 a month—no money down—how could Phil not lease a new Saab for his daughter, who was actually his stepdaughter but whom he claimed fully as his own?

Julia was embarrassed by the car, which highlighted her
self-consciousness about being a rich girl at a rich prep school. The friends she hung out with at Coventry were mostly boys, smart stoners who wore black and loved to make fun of their privileged classmates. (Somehow they were able to overlook their own privileged lives.) They had a field day with Julia’s Saab, and when she told them to shut up and leave her alone—she hadn’t asked for the car in the first place—they told her to please stop with the “saab story.”

As for Phil, he proclaimed Julia a reverse snob, adding, “I can’t wait until the day you have to support yourself. Then you’ll
really
miss your old man.”

When speculating about their parents’ last days on earth, Ruthie told Julia that she hoped they had ordered dessert after their last dinner, the night before they drove out to see the Grand Canyon, the night before they decided to board that ancient Ford Trimotor—known as “The Tin Goose” to airplane aficionados—that was supposed to fly them into the canyon itself, revealing the canyon’s details up close. Julia assured Ruthie that yes, dessert was ordered, for Naomi loved chocolate above all other foods. Indeed, she was forever breaking her diet by eating chocolate and drinking champagne with Phil, after a dutiful dinner with the girls of overbaked chicken and steamed broccoli, or turkey meat loaf and a microwaved potato, or sometimes Lean Cuisine. During the day, too, she would be diligent, drinking a Slim-Fast for lunch, or having a fruit plate with cottage cheese. But if Phil opened a bottle of bubbly after dinner, she could rarely find the willpower to say no. And loosened by the champagne, how could she refuse chocolate?

The night before they drove to the Grand Canyon, Phil and Naomi had eaten at Kokomo’s restaurant in the Mirage Hotel. Julia and Ruthie imagined that their mother wore the emerald green raw silk top she had purchased from Isaacson’s in Atlanta, that and a pair of wide-legged black satin pants that swished when she walked. She would have worn heels, of course. Tall ones. She always wore heels when she dressed up, and the feet she
slipped into them would have been creamy and free of calluses, the toenails painted with Estée Lauder Vintage Cognac. The girls both knew that Phil had a thing for pretty hands and feet, that he encouraged his wife to get a manicure once a week and a pedicure every other week, and that Naomi, though she often spoke of feeling guilty about the extravagant lifestyle Phil provided, loved to be pampered and happily, guiltily, obliged.

Phil would have worn a dark suit and white shirt, not unlike what he wore to the office most days. His tie was most likely the green one with minute white polka dots that Naomi had bought for him at Mark Shale. It would have matched Naomi’s outfit, and the girls knew that he had that one with him on the trip, for it was found, curled up with the others, in one of the suitcases that were returned to their house the week following the accident.

He would have been freshly shaved; he would have smelled like Tsar cologne, which Julia had given him for Christmas to replenish his supply. His glasses might have had a speck of dust or debris or even food on them—they often did—but Naomi would have taken out the special wipes she kept in her purse to clean them. Before they left for the hotel restaurant, she probably pulled out the lint roller from her suitcase and used it on the front of his suit, too.

Phil would have been ready before Naomi, would have been dressed and waiting to go, sitting on the hotel bed and watching a basketball game on TV while she finished applying her makeup, while she dabbed the hollow beneath her ear with Chanel No. 5. Had he been waiting for her to finish getting ready in Atlanta, Phil would have sipped from a can of beer, from whatever brand was on sale at the grocery store. Naomi wasn’t really a beer drinker, and so he didn’t have to suit her tastes when he made his beer purchases. But in Las Vegas, Julia and Ruthie were sure, Phil would have waited until he was at the restaurant to get a drink. Phil’s attitude toward the price of items in a minibar most clearly resembled moral outrage.

Key Witness by Christy Barritt
The Aleppo Code (The Jerusalem Prophecies) by Terry Brennan
Losing an Edge (Portland Storm Book 13) by Catherine Gayle
Dead in the Water by Dana Stabenow
Danger for Hire by Carolyn Keene
Wanting It All: Michael and Sarah by C.M. Steele
Vampire Kisses by Schreiber, Ellen
Cataclysm by Karice Bolton
The Love Child by Victoria Holt
Rocky Mountain Match by Pamela Nissen