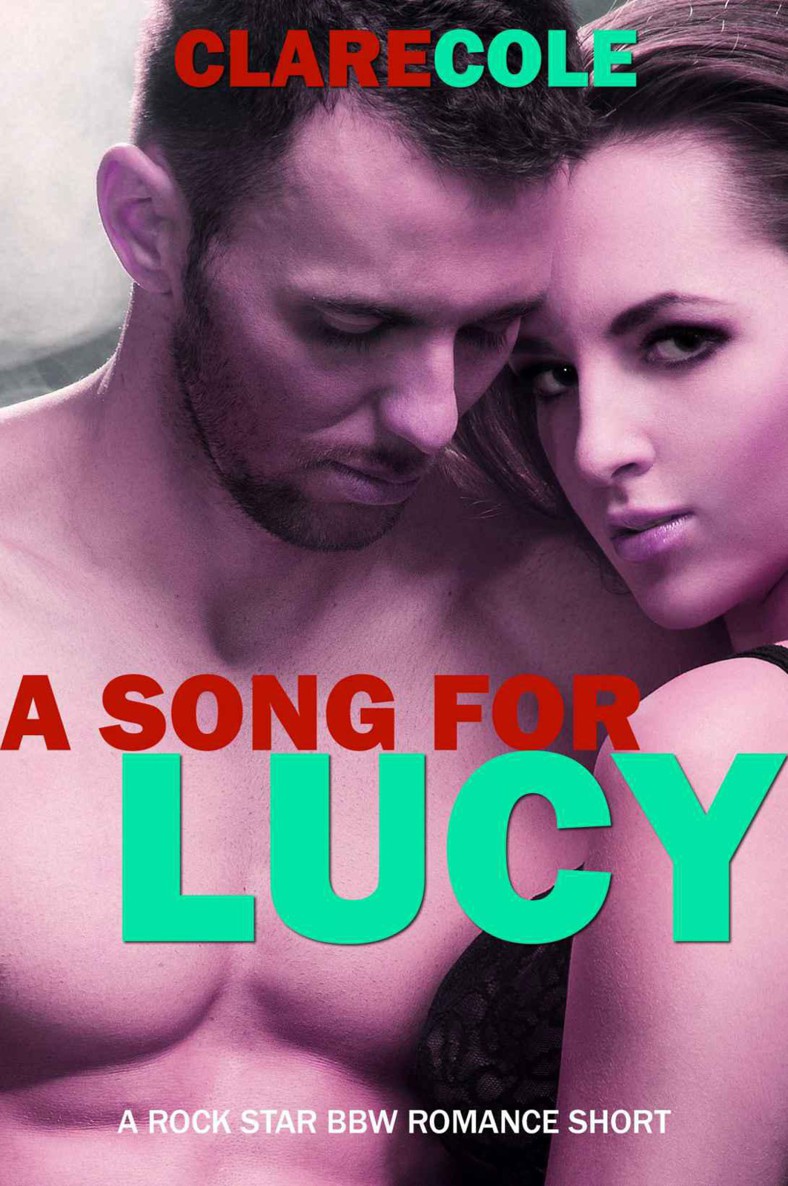 A SONG FOR LUCY

Enjoy a
free
sample chapter of Clare Cole’s hit rock star romance, “New Sensation - Curves for the Rockstar”, at the end of this short story.

Thank you for downloading this ebook.

This is a work of fiction. Any similarities to any situations or persons, living or dead, is entirely coincidental.

A SONG FOR LUCY

I knew the second I heard him sing those lyrics I would fall in love with Danny Farris.

Damn that sexy, slightly gravelly voice. Damn those sparkling blue eyes, glancing up at me as those words fell from his beautiful, full lips. Damn those muscular arms, strumming his guitar as he made me melt inside. Damn that beautiful bastard.

And damn me, too. Hopeless when the time came, falling
for him as easy as could be. I thought I was stronger than that. I thought I could resist.
I thought wrong.

I wasn't playing hard-to-get for the sake of it. Danny had been a prick to me growing up;
he poked fun at my red hair and nerdy glasses. He was my brother's best friend so I'd had no choice but to tolerate him whenever he came to our house – which was a lot of the time, by the way. He told me girls like me never had a hope of getting a boyfriend. I'll never forget the time his words cut me to the bone.

“Lucy, none of the boys like you! You'll never get a date with anyone...you're just not pretty enough!”

My brother kicked his punk ass the next day after spending a whole night trying to stop me crying. He came to the house like a dog with his tail between his legs, head bowed and with a big pin
k plaster on his knee where he'd been scuffling with my brother. He had a bunch of flowers he'd picked from some neighbor's garden in his hand.

Sixteen years on and we still shared that love-each-other-in-private, hate-each-other-in-public relationship. He was still like that kid sometimes, irresponsible and kind of cocky. But he had a
reason these days. Danny Farris was, after all, one of the biggest rock stars on the planet.

"Are you ever going to finish that damn song, Lucy?"

Lucas, my brother, rooted around in the refrigerator as he spoke. I glanced over at him, irritated. He knew I'd been struggling for some time to put together anything approaching a workable and radio friendly new song. Almost by accident I'd managed to have a minor hit single and now my record company was wanting to speed up the release of my first album. There was just one problem – they needed something new, something catchy to really kickstart my career. Easier said than done.

"It's getting there, Lucas," I replied, pretending to write lyrics on an empty page of my
Moleskine notebook. "Don't pressure me, okay?"

"Chill out, sis, I'm just trying to help. You need to strike while the iron is hot, you know?"

It was okay for him. He was the lead guitarist of Hollywood in Peril and his songwriting process consisted of handing the tune over to Danny so he could pen the lyrics. "You're not a lyrics guy, Lucas," I sneered, attempted to defend my procrastination. "It's tougher than you think to write both, you know."

"Well, go and ask Danny to give you a hand."

My heart skipped a beat. "You kidding?" I snorted. "What would I want to write a song with him for?"

"Because, in case you hadn't noticed, he's pre
tty good at it.
Don't Die Young
is currently number one in 16 countries for a reason."

"For God's sake, isn't there any pastrami in this fridge? I'm dying for a pastrami sub here!"

"You ate it all," I replied, rolling my eyes. "You and your genius songwriter back there are eating and drinking us out of house and home."

Lucas grabbed his jacket. "I'm heading to the store," he barked. "We're international rock stars for crying out loud! Can we not even get a pastrami sandwich when we need one?"

"Wait!" I shouted, panicking. I ran to the front door to catch him before he left. "What about…what about Danny?"

Lucas hopped on his motorbike and reversed back. "Well, now's your chance, sis. Go figure that song out once and for all."

As his engine roared into the distance, I heard the gentle sound of strumming from the studio at the back of our house. Danny and Lucas had converted what would have been the garage into a small but amazing studio space several months ago, the rear wall accessible from the
conveniently-placed (for those guys, anyway) kitchen. I edged forward and listened intently as Danny gently sang lyrics I hadn't heard before.

I peered around the corner to see him, eyes closed, looking as gorgeous as ever in a tight grey top and worn jeans. Damn him yet again.

He opened his eyes and smiled. “Sorry,” I stammered. “I didn't mean to disturb you.”

“That's okay.” He jotted some words into a
notepad and set his guitar down. “I'm having a bad case of writer's block, anyway.”

He laughed. “Thanks. It's nowhere near finished, though.”

“
A Simple Life
. I might keep it for myself and the inevitable solo project. I don't know if it'll really fit with the band anyway. How are things with you? I haven't seen you for a while.”

I tried to act cool, all fingers and thumbs around the
unrequited childhood sweetheart I simultaneously loved and pretended to loathe. “Yeah, good. I'm just working on my new album.”

“Really?” he gasped, raising his eyebrows. “Wow. I knew your single had done well. But the label
greenlit an album?”

“
Er...no. But I'm writing it anyway. They want another hit first.” I sat on the leather sofa opposite him and thumbed through a skateboarding magazine Lucas had left lying around.

“They want me to prove I'm not a one-hit wonder.”

Danny stood up. “Fuck them! You don't need a stinking record company taking a year to pay you and taking a cut of everything! You've got enough fans to generate a hit on your own.”

“I...I wouldn't know where to start. How would I even promote myself?”

“Are you kidding?” Danny paced around the room. “You're terrific, Lucy. You have an awesome voice, you look cool,
you're gorgeous...”

He stopped in his tracks and looked at me awkwardly. I felt butterflies dance around my insides. We both looked to the floor.

I looked up and smiled slightly. “Thanks.”

“Yeah,” I sighed. “I'm kind of dreading it though. My manager's told me it'll be airbrushed to hell. He says I need to lose some weight.”

“What? Are you freaking kidding me?” Danny stared at me, slack-jawed. “You see what I mean? Screw these idiots! You're not big, you're sexy!”

I caught my breath for a second. “You...you really think that?”

He cleared his throat. “Yes,” he nodded. “I damn well do. Is anyone with a pair of boobs considered big in this industry now? Who's next? Katy Perry? Beyonce?”

“I'm not quite Katy Perry or
Beyonce,” I laughed.

“No,” he replied, deadpan. He stared straight into my eyes. “You knock them out of the park.”

"Why are you being so nice to me?" I asked. Was it ridiculous that I still expected Danny to treat me like he did when we were kids? Was it so stupid of me to not let my guard down a little more?

"What would you prefer? That I treated you like an asshole?"

"You
are
an asshole," I grinned.

He flashed a cheeky smile back at me. "Don't believe everything you read, Lucy.
My shortcomings are some of my best qualities. Anyway, how’s your follow-up song coming along?"

I picked up an acoustic guitar, tuned it a little and began to strum the tune. I
hummed along to the bits where I hadn't written lyrics yet. Despite being used to getting up in front of crowds of people without an issue I was a little embarrassed to sing in front of Danny.

I strummed quietly. "Yeah, but the chorus is missing something."

“Shit! That's awesome. I could kiss you.”

We looked at each other for a moment. “Awkward,” I murmured.

“It's that or a songwriting credit,” he laughed, sticking his cheek out for me to peck.

Fuck it
, I thought.
Kiss him. But if you're going to do it, do it properly.

I turned his face to mine and kissed him softly on the lips. They were warm and full, as delicious as I'd imagined they might be all those times when I had laid awake at night thinking of him,
dreaming of snuggling into him in bed and falling asleep against his chest.

We broke away suddenly as my halfwit of a brother came bursting through the front door.

"I hope you've got that song written, Lucy," he said, grabbing a loaf of bread. "You need to bring in some more royalties to keep this fridge stocked up."

"Get lost," I sneered. "And if you must know, we were making great progress until you came back."

Danny and I smiled at each other knowingly.

"Hey, don't let me cramp your style. You carry right on."

"Maybe some other time," Danny said, brushing a hand across my shoulder as he passed me. "Make me one, Lucas, will you? I'm starving. Besides, we can knock things on the head for now. Your sister is coming to the gig tonight, right?"

Gig? What gig?
I looked at Danny, open-mouthed.

"Yeah, sis, you should come. See how the pros do things."

"Screw you, Lucas. Besides, which pros are you referring to? Not you two jokers I hope."

Danny laughed. "Seriously, Lucy, I'd love you to come."

There was a long pause that bordered on awkward before I offered up a meek response. "Maybe."

"
Aww, I'm just joking sis," my brother said, munching his way through his beloved sandwich. "It's just a little intimate thing in The Civilian bar downtown. Trying out some new tracks, you know? We sent some private messages to local fans on our Facebook page. We don't want too many people turning up."

"There's room for one more
, though," Danny smiled.

I was going to keep them guessing for a while, but deep down I knew exactly where I'd be going that night.

It’s so easy to let a little bit of success go to your head. Ever since I had a minor hit song – and a minor hit is still a hit, mind you – I started to believe I would be fighti
ng off attention everywhere I went. Guys would be throwing themselves at me left, right and center, girls would want to be me – or would hate me because, you know, my ass was too big or my hair was too red. You know how girls are.

As I sneaked into the back of the crowd at The Civilian for Danny’s intimate gig, my
new-found semi-fame may as well have never happened. No-one even looked at me.
No-one
. For a silly split-second I was almost crushed. Then I realized why. Not a single person was interested in anyone except the people up on that stage. My brother had his admirers to some extent – there’s no accounting for some people’s taste. But, for the most part,
everyone
was here to see Danny Farris.

It wasn’t hard to see why. He had presence, a glint in his eye. He could say more with a swagger and shake than most performers can in a thousand words. No doubt about it – this dude was always destined to be a star.