Read A Time to Surrender Online

A Time to Surrender 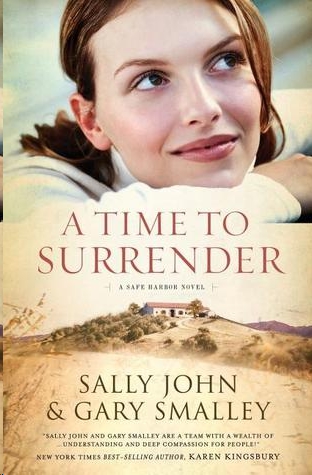 Thomas Nelson, Inc., titles may be purchased in bulk for educational, business, fund-raising, or sales promotional use. For information, please e-mail [email protected]

For our troops and their families

OTHER NOVELS IN THE SAFE HARBOR SERIES:

A Time to Mend
, Book One
A Time to Gather,
Book Two

Honestly, she taught grammar and John Donne’s poetry to sixteen-year-olds!

A rushing noise whistled through her head again. Her ears burned. The base of her throat pulsated in sync with a wildly erratic heartbeat. She flicked her straight black hair off a shoulder.

Which was totally out of character for him.

Which totally defined the insanity of the moment.

Jenna sat with ninety-nine other abnormally subdued faculty members in the high school auditorium. Ten of those people, including herself, were related to military personnel, all currently deployed overseas. Ten teachers who had an infinite number of other things to do before the first day of school
tomorrow
. Ten teachers who had countless
better
things to do than sit around while their principal singled them out for a salute to the armed forces—aka
pity party
.

Beside her, the sophomore lit teacher touched Jenna’s arm. The woman’s eyes looked like overfilled bathtubs.

Evidently Jenna’s fairy godmother had taken a hike. There would be no
poof
ing her from this wretched scene. Jenna rose to her full five-eight height, careful not to slouch, and stood rigidly next to her seat.

“As most of you know,” Cade said, “Jenna’s husband is Kevin Mason, last year’s winning varsity football coach and PE teacher here at Sundance High. He’s a Marine, serving in . . .”

Jenna tuned out her boss and glanced around. Two others stood with her. That left seven to go. Seven more loved ones to name along with their branch, rank, unit, platoon, or whatnot numbers. Seven more foreign, unpronounceable locations to reference.

John Donne had it all wrong. “No man is an island”? Yeah, right. She disagreed. She was totally an island, hemmed in by huge swells of dread. The warm fuzzies directed her way at that moment could not build bridges over such waves. Applause could not warm her bed or explain why he left or fill the lonely dinner hour night after night.

The principal was a good guy. Great with the students, respected by his staff, liked by most parents. His tearing her inside out in public, however, was the most idiotic thing he’d ever done.

She remained deadpan throughout his presentation and imagined chiding him. The mental exercise worked. She made it through seven more intros, ears still aflame but serenity intact. Yes, Jenna Beaumont Mason could do cool.

And then the applause evolved into a standing ovation.

Okay. So her mascara was getting smudged. Not a problem. Jenna Beaumont Mason could do damage control, no sweat.

T
he scolding and makeup repair were both put on hold. As soon as Cade ended the meeting, several teachers surrounded Jenna, offering hugs and words of gratitude and concern. Finally the last one stepped front and center.

The woman was vaguely familiar. She had short, bouncy blonde curls and a perky demeanor to match. Wasn’t she a cheerleader coach?

“Jenna, I am so, so sorry I didn’t get with you last spring when Kevin left, but Joey shipped about the same time.”

“You know how crazy life is when that’s all happening. I mean, to tell your husband good-bye for a year—” She mashed her lips together, shook her head, and then gave her shoulders a quick shrug. “So anyway. You made it through the summer, too, and here we are. Trust me, work is a godsend. At least it always has been for me.”

“Mm.” Jenna hummed a noncommittal reply that got lost in the woman’s monologue.

“Put me in a lab with a bunch of kids and I’m content as a gecko with a cricket in its gullet.”

“Of course when we cover explosives, the kids are all over it. They say ‘Mrs. Ames, why can’t we build just a little bomb?’ Then I’ve got Joey right there in the room with me. It’s his specialty. Bombs, explosives. Not that I tell them that, but you know what I mean. I can’t help but imagine what he’s up to over there.”

“Jenna, did you notice that out of the ten of us introduced, you and I were the only ones with spouses in the military? Everyone else had an in-law or a cousin. I bet this is your first, huh?”

“Deployment.” She pointed at one of her own eyes. “I gave up mascara the second time Joey went.”

“This is his third. That I know about, anyway.” She leaned toward Jenna and lowered her voice. “He’s a Navy SEAL. What am I going to do?”

Jenna felt an arm brush hers and turned to see Cade.