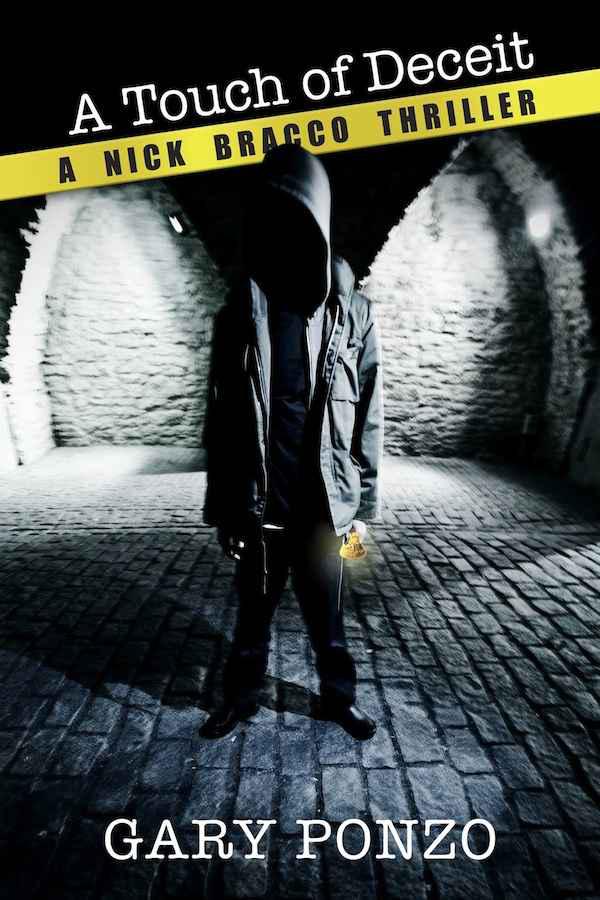 A Touch of Deceit
by Gary Ponzo

This book is a work of fiction and the creation of author Gary Ponzo.

To Jennifer, Jessica and Kyle. All that matters.
Contents

There was a time when Nick Bracco would walk down Gold Street late at night and young vandals would scatter. The law was present and the guilty took cover. West Baltimore was alive with crime, but Gold Street remained quarantined, reserved for the dirtiest of the dirty. That’s how Nick remembered it anyway. Before he left for the Bureau to fight terrorists. Now, the narrow corridor of row houses felt closer to him and the slender strip of buckled sidewalk echoed his footsteps like a sentry announcing his presence. It wasn’t his turf anymore. He was a foreigner.

Nick scrutinized the landscape and searched for something out of place. The battered cars seemed right, the graffiti, even the shadows seemed to darken the proper corners. But something was missing. There were no lookouts on the concrete stairwells. The ubiquitous bass line of hip-hop was absent. The stillness reminded him of jungle birds falling silent in the prelude to danger. The only comfort came from the matching footsteps beside him. As usual, Matt McColm was by his side. They’d been partners for ten years and were approaching the point of finishing each other’s sentences.

“Did I mention that I don’t have a good feeling about this?”

“Uh, huh.” Matt tightened his collar against the autumn chill and worked a piece of gum with his jaw. “That’s your theme song.”

“Really? Don’t you ever get a bad feeling about a call?”

“How come you never tell me?”

“I’m going to feed the flames of paranoia?”

They walked a little further in silence. It got darker with every step. The number of working streetlights dwindled.

“Did you just call me paranoid?” Nick said.

Matt looked straight ahead as he walked. His casual demeanor caused him to appear aloof, but Nick knew better. Even at half-mast, Matt’s eyes were alert and aware.

“Maybe paranoid is too strong a word,” Matt said.

“That’s better,” Nick said. “By the way, did you eat your broccoli tonight?”

Their pace slowed as they got deeper into projects. Low-lying clouds gave the night a claustrophobic feel.

“This guy asked for you specifically?” Matt said.

“That bother you a little?” Matt asked.

Up ahead, a parked car jostled. They both stopped. Neither of them spoke. They split up. By the book. Years of working together coming into play. Matt crouched and crept into the street. Nick stayed on the sidewalk and gave the car a wide berth. In seconds Matt became invisible. The car maintained a spastic rhythm. It was subtle, but Nick understood the familiar motion even before he flashed his penlight into the back seat and saw a pair of young eyes pop up through the grimy window. They were wide open and reacted like a jewel thief caught with a handful of pearls. The kid’s hair was disheveled and his shirt was half-off. His panting breath caused the inside of the window to fog up. He wasn’t alone. A pair of bare legs straddled his torso.

From the other side of the vehicle, Matt emerged from the shadows and charged the car with his pistol out front. He was just a few yards away when Nick held up his hand and said, “No.”

Matt stopped dead. He must’ve seen the grin on Nick’s face and realized the situation. He slowly holstered his Glock and took time to catch his breath.

Nick clicked off his penlight and slipped it back into his jacket. He smiled. “It may be nothing, but you sure worked up a sweat doing it.”

When Matt fell back into step next to his partner, Nick said, “You seemed a little . . . uh, paranoid?”

Matt returned to nonchalant mode. “Kids that young shouldn’t be doing the nasty out in the street.”

“Consider their role models,” Nick said. “You can’t change the tide with an oar.”

“Pardon me, Professor Bracco. Who said that one—Nietzsche?”

They slowed their pace until Nick stopped in front of an old brick building with a worn, green awning above the entrance. Nick gestured down a dark flight of stairs where a giant steel door stood menacingly secure. “There it is.”

Matt nodded. “You bring me to all the best spots.”

When he was certain of their solitude, Nick descended the stairs. Matt followed, keeping an eye on their rear. In the darkness, Nick barely made out Matt’s silhouette.

“Listen,” Nick said, “it’ll be easier if we don’t have to use our creds, but let’s see how it goes. I don’t want to say any more than I have to, and you say nothing at all. Just be the silent brute that you are. Capisce?”

“If we get lucky, I’ll see a familiar face.” Nick raised his fist, hovered it in front of the door, then stopped to sniff the air. “You wearing aftershave?”

“You have a date after this?”

“Who makes a date with you at midnight?”

“She’s a waitress. She doesn’t get off until then.”

In the murky darkness, Nick sighed. He turned to face the door and, just like a thousand times before, he said, “Ready?”

He couldn’t see the response, but he heard Matt unfasten the flap to his holster. Matt was ready.

Nick used his wedding band hand to pound on the metal door. He shifted his weight as they waited. Nick heard Matt chewing his gum.

A rectangular peephole slid open allowing just enough light through to see a dark face peering out. The face was so large the opening supported only enough room for one of his eyes.

Nick leaned close to the opening so the man could see his face. The opening quickly slid shut.

They stood in the silence while Nick thought of his next move.

The clang of locks unbolting was followed by the door squeaking open. It reminded Nick of an old horror movie.

The large black man wore a large black shirt that hung over his jeans and covered enough space to hide a rocket launcher. The man ignored Nick and gave Matt the once over.

Matt gave him the stone cold glare of a pissed-off FBI agent. No one did it better.

Then the man turned his attention to Nick. His head was round and clean-shaven. His expressionless face seemed to be set in cement.

Nick spread open his hands and raised his eyebrows. “Well?”

The man’s face slowly softened, then worked its way into a full out smile. “Where the fuck you been, Bracco?” He engulfed Nick into a giant bear hug, momentarily lifting him off of his feet.

Nick patted the beast a couple of times on the back and slid down to face him. “I can’t believe you still work here.” He gestured to Matt, “This here is Matt McColm. Matt, this is Truth.”

Truth nodded to Matt, then slapped Nick on the shoulder. “Last time I saw you, you were still with the Western.”

Nick grinned. He looked over the big man’s shoulder to the solid green door that Truth guarded. Beyond the fireproof frame was a large, unfinished basement filled with poker tables. This time of night the tables would be surrounded by chiropractors, strippers, tax accountants, firefighters and probably even a couple of cops from Nick’s old beat. A mixture of cigar and cigarette smoke would be lingering just below the fluorescents.

Nick shook his head. “I’d scare them all off. You know I’m with the feds now?”

Truth frowned. “You don’t come around for ten years and the first thing you think to do is insult me?”

“We may be compulsive gamblers,” Truth explained, “but we’re not illiterates. I read the story. Local boy makes good.”

Nick held up a hand. “Hold on. Don’t believe everything you read in the rags.”

“Since when is Newsweek a rag?”

Truth waved a thick finger back and forth between the two agents. “He’s the partner. They called you two the Dynamic Duo or the A-Team or some shit.”

Truth snapped his large fingers. “Dream Team. That’s it. I knew it was something like that. You two dug up some kind of terrorist cell planning to waste the Washington Monument. Isn’t that right?”

He pointed to Nick. “According to the article, you the brains and he’s the muscle.”

“The way you say it,” Nick said. “It makes my partner here sound like a bimbo with large biceps. Look at him. Does he look like he pumps iron?”

Truth examined Matt’s long, thin frame and shook his head. “Nope. So he must be good with a 9.”

Truth smiled. “You two aren’t here to raid the place, I know that much. They wouldn’t send that much talent for this old joint.”

“Come on, Truth.” Nick said. “This is a landmark. My father used to play here. I’d rather see it turned into a museum first.”

Truth’s smile transformed into something approaching concern. “And you’re not here to play poker either?”

“Then it must be business.”

Nick stood motionless and let the big man put it all together.

Truth looked at Nick, but nodded toward Matt. “You wouldn’t bring the cowboy unless you felt a need for backup. Something I should know?”

Woman Chased by Crows by Marc Strange
Holy Island Trilogy 03 - The Final Countdown by Sheila Quigley
Ladies of Deception 03 - Betraying the Highwayman by Ginny Hartman
A Lesson in Chemistry With Inspector Bruce by Jillian Stone
No Going Back by ALEX GUTTERIDGE
The Exorcist by William Peter Blatty
Bad Jack ((Ascension: Book 1)) by Moon, Adam
Black Hounds of Death by Robert E. Howard
The Rising Dead by Stella Green
Blood Brothers of Gor by John Norman