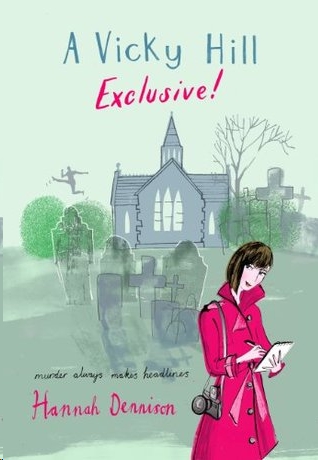 Hannah Dennison
was born in England, relocating to Los Angeles with her daughter and two cats in tow to pursue a career in screenwriting. Along the road to publication she has served as an obituary reporter, antique dealer, private jet flight attendant and Hollywood story analyst.

Hannah is currently serving on the judging committee for the 2012 Edgar Allan Poe Awards for the Mystery Writers of America. She teaches mystery writing and social media at UCLA in Los Angeles and still works full time for Davis Elen Advertising, a west coast advertising agency.

Although California is where she currently lives, Hannah’s heart will always be in the English countryside. She enjoys hiking, horse-riding, skiing and seriously good chocolate. Hannah is married to a fellow writer.

Published in the US by The Berkley Publishing Group, a division of Penguin Group (USA) Inc., New York, 2008

First published in the UK by Robinson, an imprint of Constable & Robinson Ltd, 2012

The right of Hannah Dennison to be identified as the author of this work has been asserted by her in accordance with the
Copyright, Designs and Patents Act 1988.

I wish to extend my heartfelt gratitude to:

Claire Carmichael: instructor extraordinaire, Australian guru, and wonderful friend. Thank you for your irrepressible humour, genius suggestions, and endless support. I hope to repay your many services one day with the gift of a small island.

Mark Davis: chairman of Davis Elen Advertising and amazing boss. Thank you for supporting my dreams and embracing them as your own.

Linda Palmer: fellow author, kindred spirit, and sister-in-crime. Thank you for your selfless advice, kindness, and infinite generosity in sharing your publishing experiences.

Kerry Madden: author and teacher who discovered the character of Vicky Hill and insisted I bring her to life.

Sarah Smith, aka Pose: my daughter, who never stopped believing in me.

The Dennisons: with special thanks to my parents for passing on their sense of humour and for sharing their unusual and often intriguing insights on life and love. Happily, they have never been wanted criminals.

Natalee Rosenstein: editor at Berkley Prime Crime. Thank you, not just for taking a leap of faith, but also for the brilliant suggestions without which Vicky might still be languishing in a bottom drawer. Thanks also to Michelle Vega, assistant editor at Berkley Prime Crime, who does everything with a smile and is the most efficient person I know.

My agent, Betsy Amster: for taking a chance on an unknown writer.

The UCLA Writers Program: For enabling me to transition from amateur writer to professional author.

And, last but by no means least, Jason Elen: my husband, who willingly took on the roles of nursemaid, drill sergeant, cheerleader, therapist, cook, launderer, man Friday, and without whose love and support this book could never have been finished. You are my hero.

T
he brown envelope addressed to Annabel Lake sat on her empty chair.

Of course, it was marked
confidential
, but given that Annabel was home, suffering from a severe case of food poisoning, I thought it prudent to open it. After all, it could be urgent and what was in a name, anyway? Weren’t we journalists all seeking truth and justice?

The note bore today’s date but was tantalizingly unsigned. I felt a thrill of excitement. Apparently, something ‘macabre’ had been discovered at Gipping County Council Rubbish Tip, and ‘could Annabel Lake go there straight away.’

Within minutes, I had my headline:
RUBBISH REVEALS ROTTING REMAINS: A VICKY HILL EXCLUSIVE
! Or, should the discovery prove really grisly:
GIPPING TIP TORSO TERROR
.

All I had to do was persuade Pete Chambers, my boss and chief reporter of the
Gipping Gazette
, to give me the story.

I tapped on Pete’s office door and braced myself for the usual barrage of obscenities.

‘It’s Vicky.’ I opened the door a crack and waved the note and envelope at him. ‘Just got this in. Could be a big one.’

‘That’ll be the day.’ Pete sneered, gesturing for me to step through a wall of cigarette smoke into his cramped office. ‘You’ll soon learn, luv.’

I felt sorry for Pete. Somewhere along the line, he’d grown disillusioned. Apparently, this happened to a lot of middle-aged journalists who saw too much of life’s cruelties. It would never happen to me.

Pete scanned the note with a frown. ‘This is addressed to Annabel. Where the bloody hell is she?’

‘This is marked
confidential
, Vicky.’

‘I thought it looked urgent. Diarrhoea could go on for days. I’d never have opened it otherwise – honestly.’

‘Tony has a cold – flu, actually – and Edward’s covering that abused sheep love-triangle case in court that could go on all week.’ I smiled. ‘But I can—’

‘No you bloody can’t.’ Pete flicked ash onto the floor. ‘You’re reporting Trewallyn’s funeral. Christ! Why did Annabel do this to me? She knew today was important.’

I wanted to point out that Annabel had not deliberately chosen to eat a dicey curry, but thought it wise to keep quiet. Besides, I knew exactly the reason for Pete’s angst – though I would never let on. He and Annabel were secretly working on something important. I’d caught snatches of ‘Biggest story Gipping has ever had,’ and ‘The report will confirm it all.’

Then, yesterday, when I brought their afternoon tea and made an innocent remark about Sir Hugh Trewallyn’s funeral, Annabel had become flustered. She’d quickly hit ‘sleep’ on her computer keyboard so I couldn’t see the screen. Honestly! How immature! Didn’t she know I was aiming to become a famous international correspondent like Christiane Amanpour? It was only a matter of time until I would find out what was going on.

‘I thought I could go via the rubbish tip on my way to the funeral,’ I ventured.

‘No.’ Pete drummed his fingers on the desk. ‘It’s Annabel’s lead, Vicky. Not yours.’

I longed to shout aloud, ‘It isn’t! It isn’t! I was here before her. It’s not fair!’ but instead, I gave a bright smile and said, ‘Just trying to help.’

‘Well, don’t.’ Pete angrily stubbed one cigarette out and lit another.

I knew this so-called report was due to be delivered today and, judging from Pete’s reaction, I guessed one of his informers would be slipping it to him on the quiet.

‘Why don’t you go? I’ll wait here for that special
report
,’ I said, with wide-eyed innocence.

‘I’ve got no bloody choice, have I? My balls are in a vice.’

I pushed that image firmly to the back of my mind. Before Pete could change his, I put on my beige safari jacket – Christiane wears hers in the field all the time – and headed for the door. ‘You won’t regret it,’ I said.

‘Wait!’ Pete took a key out of his pocket, unlocked the bottom drawer of his desk, and retrieved a Nikon digital camera. ‘You’d better borrow this. Annabel tells me you don’t have one.’

‘Of course, I do! It’s being repaired,’ I said mentally cursing Annabel who always loved to make me look incompetent. Dad had given me a Canon Digital Rebel before they left for Spain, but the batch had turned out to have a faulty flash. Thanks to the barcode tracking system, I couldn’t even use the guarantee to get a replacement. It was most annoying.

‘I hope you didn’t take it to Ken’s Kamera,’ Pete said. ‘He’s worse than bloody useless.’

‘No reporter should ever be without a camera these days,’ Pete scolded, ‘Especially if it’s for the front page.’

Front page! This could be it – my lucky break! ‘What do you think I’ll find at the dump?’

Pete handed me the camera. ‘Know what to ask?’

I hurried out of his office. With Annabel out of action, this was my long-awaited chance to prove my mettle and escape from what seemed like the never-ending world of funeral reporting.

When my parents fled the country four months ago, I moved from northern England to begin an apprenticeship with the
Gipping Gazette
in Devon. I imagined I’d be working on the crime desk – or recording gruesome murders at the local Magistrates’ Court. I was sorely disappointed.

Gipping-on-Plym had to be the most boring town in all of England. Divided by the River Plym, Upper Gipping, to the north, was home to toffs, wealthy farmers, and the nouveau riche – the sort of place where Dad would do a lot of business. By comparison, Lower Gipping, to the south, resembled a mining slum from a D. H. Lawrence novel. Once a bustling community that took pride in working for Trewallyn Wool and Textiles, the old factory had long closed down leaving the residents disillusioned and unemployed.