A Virgin for Two Brothers 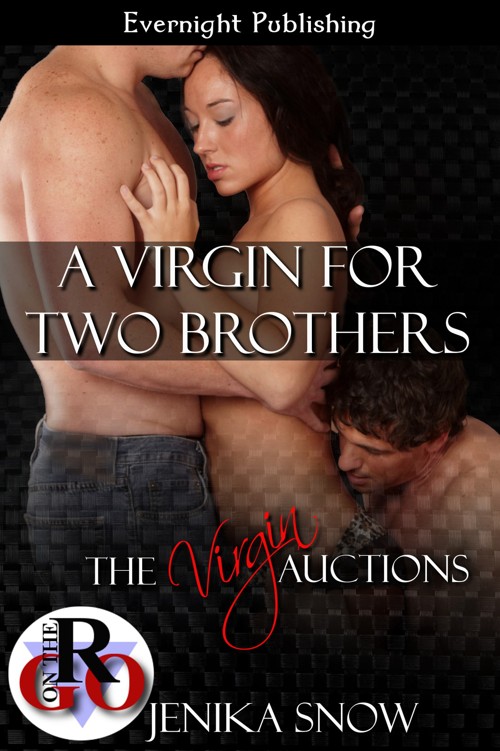 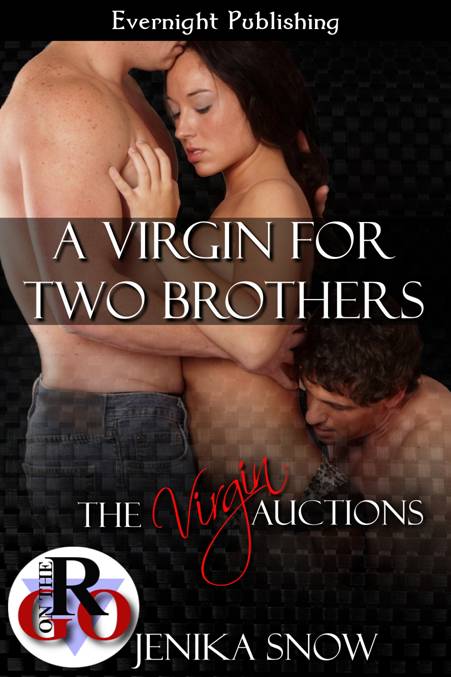 This is for you. They said you couldn't
have what you want, but you showed them that they were wrong!

A
VIRGIN FOR TWO BROTHERS

The year is
2135, and young women are bid upon at the Virgin Auctions, a city-wide event
that allows wealthy men to purchase young brides for an exorbitant price. These
females are prepped from a tender age to be docile and submissive wives that
will please their future husbands. Once they are bought, they are at the mercy
of their owners.

The
lights were especially bright when the announcer told McKenna Grey to lift her
head to the crowd. She couldn’t see anything, aside from the blinding spotlight
that showed everyone on the bidding floor what had been under her robe just
moments before. Hands from behind lifted her breasts up and tweaked her
nipples, so that anyone wanting to bid on her would know exactly what they were
buying. After the humiliation of her body being put on display like a piece of
meat, she was instructed her to lie back on a smooth wooden table and spread
her legs. She hated this––hated knowing that someone was out there, watching
her, seeing the most intimate part of her.

She
wasn’t like the other girls. She hadn’t been trained and prepped for what to
expect. The Virgin Auctions were more commonly reserved for the aristocratic
families, but that didn’t mean a woman from a well-to-do family couldn’t offer
herself up. She may not get all the benefits a wealthy family provided, but she
could do this just like any of the other girls. How hard could it be, anyway?

At twenty years old, she was the ideal age to
participate in the auctions. Because she had no money like the other girls did,
she didn’t have an attendant to help her prepare for today. McKenna had done
her own hair, her own waxing and rubbing oil on her body. She was alone in
this, but the reason she was doing this made it worth it.

McKenna thought these auctions were barbaric
and disgusting, but what other choice did she have? With her mother ill and her
father using all of the family’s extra resources to get her mother well, it was
up to McKenna to earn money for them to ease the burden. They had always been
there for her, guiding her in making the right decisions, and now it was her
turn to help them. They weren’t at the poverty level, but she had two sisters
and a brother and when her father’s business failed due to their family
problems, the stress in their home increased tenfold. She could not be a
disappointment to her family or the reason her mother didn’t get the care she deserved.
This was her chance to help her mom and dad instead of being a burden, like she
knew she had been for years.

McKenna
stepped out of the limousine and followed the driver up the stone steps of her
new home. She wasn’t surprised to be bought, because every virgin was bought
when they were on the auction block. What did surprise her was that her future
husband hadn’t even been there to bid on her. He had sent his butler or driver,
or whomever the hell this guy was who’d driven her here.

The
front door opened and she was led inside the massive house. It was far bigger
than any home she had ever seen. If she hadn’t already known her husband was
one of the wealthiest men in the city, she sure as hell did now. That knowledge
left a bad taste in her mouth and her stomach knotted with worry. He had to be
old,
very
old, to be so well off. The
majority of the rich
men
that bought wives
were easily three times her age. Would he be cruel to her? What number wife was
she to him? She knew she would never find out the answer to her
questions––well, not the latter, at least
unless he
owned a harem, which could very well be a reality.
A good wife never
asked questions, and never spoke without being spoken to. It was also not
uncommon for a man to have more than one wife, as if he needed more than one to
keep his bed warm.

She
knew she would find out if he were gentle or rough, sweet or cruel soon enough.
Just thinking about her first time with him was enough to make her dizzy with
worry. It was futile to have this internal debate, because it would only drive
her to the brink of insanity––that much she was sure of.

The
front door shut behind her and the sound bounced off the walls and the
cathedral ceilings. “I’ll show you to the sitting room, where you will be seen
momentarily.” The driver led her into a vast room with a roaring fire and the
ambiance of a different era. The drapes were a soft, muted yellow that seemed
to glow under the firelight. The furniture was a gentle cream color, with an
elaborate embroidering. It was beautiful and soft, but she wouldn’t let the
façade blind her to the fact that she might have just walked into the lair of a
monster. Walking further into the room, she let her fingers glide over of the
material of one of the chaises. Never had she been around such lavish and
elaborate possessions. Who was this man that had purchased her, yet had never
even been to the auction … never seen her in person, as far as she could tell?

Although
it wasn’t uncommon for men to have their servants attend an auction
occasionally, it usually meant they were too frail, sick, old, or a combination
of the three, and therefore couldn’t make the trip or use the energy. The
“merchandise” available for bidding wasn’t left a secret, though. Weeks before
the auctions, the attendants were allowed files on the girls. No secret was
left untouched for their reading pleasure.
She may
not know him, but there was no doubt in her mind that her husband knew every
intimate detail about her.
So although it was not uncommon for a virgin
wife not to meet her husband until the night she was to lose her virginity, it
was still strange to her that he’d pay such a high price and not be there in
person to “collect” her.

She
wondered what her husband thought when he saw her file? The photos that were in
each woman’s file weren’t nudes, so it wasn’t like he was seeing anything
obscene, which was even more curious because she could have had any kind of
imperfection. Even a birthmark was viewed by some as a “deformity.”

Goose
bumps popped out along her skin despite the warmth of the fire. She was scared
of what her life would now become. She shivered and wrapped her arms around her
waist. The only clothing she wore was the thin robe all virgins were dressed in
before going upon the auction block. She had no personal belongings, nothing
that she could have brought with her to remind her of home. She was completely
alone here. She just prayed that the amount that was paid for her would be
enough to help her family. Would she even be able to see her family again?
There was no guarantee her husband would allow her out of the house, much less
allow her to visit her family outside of city limits. Would her mother get
better? Would McKenna even know it if she did? The thought of never seeing her
family again was hard, too hard, but she had to stay strong. She hadn’t met her
husband, so she had no idea what he was like. All this fear could be all for
nothing.

She
moved closer to the fire and sank to her knees. The flames licked over the
wood, as if their sensual dance would elicit more heat, more light. The sound
of the door opening made McKenna’s
pulse
race.
This was it: the moment when she would meet the man she would spend the rest of
her life with. Maybe she would grow to love him like so many of the other
virgins in past auctions had?

She
didn’t turn around and greet him because she knew a good virgin wife was always
docile and submissive. She would wait until she was spoken to. Maybe if she got
in his good graces, she might win his favor and he would allow her some
semblance of freedom? Dropping her head and clasping her hands behind her back
in submission, she waited for him to approach. The heat from his body was just
as hot as the fire in front of her. It seeped through the thin material of her robe
and chills raced up her spine despite the warmth.

The
light touch
of
his finger down the center of
her back made McKenna close her eyes. The scent of him was potent and masculine
and for just a second she imagined someone not the age of her grandfather. The
smell sent a wave of memories through her. Her eyes opened and she stared at
the flames. In fact, his touch was familiar too.

Lumberjack (A Real Man, 1) by Jenika Snow
Fatal Obsession (Black Widow Book 2) by Christina OW
Up Close and Personal by Maureen Child
Brilliance of the Moon by Lian Hearn
It Only Takes a Moment by Mary Jane Clark
Dude, You're Gonna Be a Dad! by John Pfeiffer
The Problem with Promises by Leigh Evans
Hotel World by Ali Smith
Mentor (An Impossible Novella) by Julia Sykes
Silver Thaw by Catherine Anderson