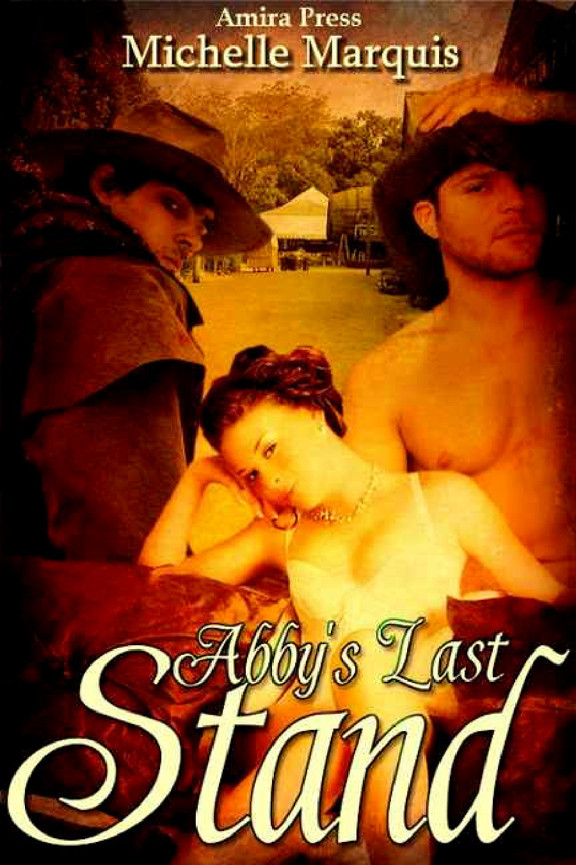 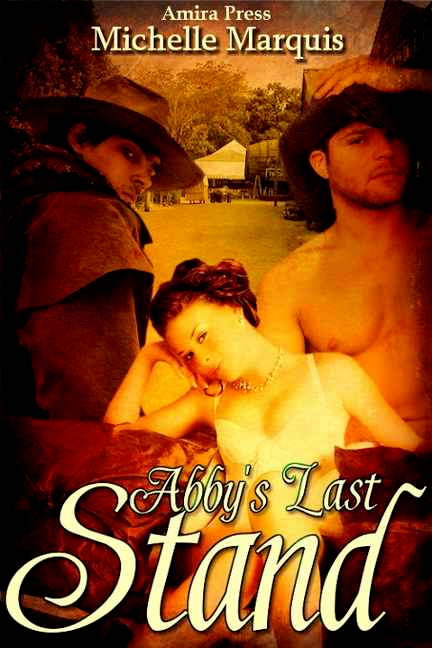 No part of this e-book may be reproduced or shared by any electronic or mechanical means, including but not limited to printing, file sharing, and e-mail, without prior written permission from Amira Press.

For all those who ride 'em hard and put 'em away wet.

Her trip hadn't been planned. It was an impromptu journey to reclaim something that had been taken from her: a feeling of safety and justice. Perhaps her aching desire to escape the mundane life of a small-town seamstress added to it. But a new life, no matter what the motivation, wanted for money and Abby was very close to all out. She just hoped she could find work when she reached her destination.

The coach rolled and jerked over the rugged dirt road. A dozing banker with a thick, gray mustache stirred then rolled his head onto the shoulder of a middle-aged schoolteacher.

The woman clutched the worn leather bag on her lap as if it contained the secrets of the known world. When the banker's head came to rest on her shoulder, she shrugged it off angrily. The banker woke for a moment, glanced around, and then folded his arms and resumed sleeping.

Abby wished sleep would come that easily to her.

Even with the open windows, the inside of the coach was hot and stuffy. Add to that the stink of sweating bodies that hadn't been able to bathe in a few days and you had one steamy ticket to misery. A young man with deep acne scars sat next to her. He hadn't said anything the whole three-hour ride, but finally the boredom must have gotten to him 6

because he leaned over and asked her if she was headed to Foster's Gulch.

"You got family there?" he asked.

"No, just looking to start a new life."

"Running from someone, are ya?"

The man looked thoughtful, and Abby wished for all the world that he would mind his own business and stop talking to her. She didn't want someone sticking his nose in her personal affairs. The man squinted at her, and it made him look even uglier, if that were possible. "You ever been there?"

"Well, if you don't mind me saying, miss, that's a rough town. They got outlaws and gunslingers emptying lead into each other almost every night when the saloon closes. Not really a place for a lady alone."

The man glanced around the coach. "I didn't see you with nobody."

Abby hated to lie, but this person was fishing for information and she didn't like it one bit. "I have some friends in town waiting for me."

The man's brow creased like he was trying to decipher a riddle. "What kind of work do your friends do?"

She forced a smile but made her tone a little harsher. "I appreciate your concern, sir, but I'd rather not discuss my personal business with you anymore. No offense."

The man blinked at her like she'd just spit in his eye. Then his mouth dipped into a severe frown, and he turned his attention to the passing scenery.

"You a whore?" the schoolteacher blurted out.

Abby iced her with a cold stare before she answered. "I most certainly am not, madam. What would possess you to say something so insulting?"

The schoolteacher was unfazed by Abby's disdain. "Only kind of women who can get work out at Foster's Gulch are women of ill repute."

Abby couldn't believe how obnoxious this woman was. "If you must know, I'm a widow and I can assure you, I earn my living by legitimate means."

"What are those
means
?" the teacher pressed.

Abby made her mouth into a straight line to show her displeasure. "I'm a seamstress."

The woman scoffed. "They ain't got no use for dressmakers in a town like that. You'll be starving outside a week and end up selling your body to survive."

"First of all, I'm not a dressmaker. As I told you, I'm a seamstress and a damn good one, too, if I might add.

Second, if I can't find work sewing, I'm sure I can find other employment. I'm willing to do anything except sell myself, so you needn't worry about me, madam."

The teacher stared down at her bag. "Nobody there's gonna need your damn fool sewing."

"And just what makes you such an expert on it?"

The teacher shrugged. "Folks know about that place. Most folks, that is, 'cept for you. You don't seem to have the good sense God gave a mule. You mark my words, Foster's Gulch ain't no place for a young woman alone. You'll find that out soon enough. And if you have any sense at all, you'll borrow the money lickety-split to get the hell out of there. That place is nothing but a haven for devils and thieves."

"I'll keep your advice in mind," Abby said. She hoped the edge to her voice would tell anyone else wanting to offer unsolicited advice to save it. She wasn't a child; she knew what she was doing.

The coach suddenly came to an abrupt stop. Abby could see a few weathered buildings surrounding them. The door opened, and the coachman was there holding her two carpet bags.

"End of the line for you, miss. This here's Foster's Gulch."

Abby climbed over the other passengers and got out.

They'd dropped her off in the middle of the road in what could only be the center of town. From what she could see, it didn't look like much. A creeping dread filled her with panic.
What if
that crazy old maid was right? What if I've made a terrible
mistake coming here?
But the moment those doubts filled her she quickly chased them away. She
had
to make this work.

She had to finish her business; her sister was counting on her.

Abby reached down and picked up her bags. Then she headed to the largest building in the middle of this sorry little 9

town. The huge sign above read "Saloon." She summoned up her courage and pushed through the swinging doors.

The saloon was noisy, dusty, and hot. Abby pushed through the swinging doors carrying her two heavy bags. All eyes were immediately on her. The looks were curious, probing, and some downright scary. She avoided eye contact with anyone and quickly made her way over to the far end of the bar. There she squeezed into a corner and climbed up on the barstool. The barkeep came over and stared at her. He was a big man with small, mean eyes, a shaved head, and a thick, gray mustache.

"What's your poison?" he asked.

Abby glanced around nervously. "Ah . . . I was wondering if I could just have a glass of water."

"You say you wanted
water
?"

A few nasty chuckles came from the men sitting nearby.

Abby didn't want any trouble. The barkeep was obviously cheating her, but she was so thirsty. She dug through to the bottom of her bag and felt around for two coins. Someone walked up, his boots thumping and spurs jingling with every footfall. The boots belonged to the roughest-looking man Abby had ever seen. He seemed to her to be a giant with a face so hard and cruel it chilled her blood just to look at it.

Her dry mouth went instantly drier. Across the man's hips was a holster for two pistols and lots of bullets. He was dressed all in dark brown and black, right down to his boots.

He definitely fit the stereotype of a gunfighter.

He placed two shiny silver coins on the bar. "Her drink's on me."

Abby was grateful for his kindness but worried over what it might cost. The barkeep took the two coins and placed a glass of water in front of her. The glass was a little dusty, and there were a few specks floating in the water, but Abby was so thirsty she reached for it anyway.

The gunfighter grabbed the glass first. He picked it up and slowly poured the contents all over the barkeeps feet. The bald barkeep and the gunfighter exchanged a cold, tense stare. "That ain't no way to treat a lady, Buck. You gonna have the gall to change this girl then you gonna give her dirty water to drink?" He held the now-empty glass out. "I know you can do better than that."

Abby was about to say it was fine, she'd drink it, when the bald man walked away. To her surprise, he came back with a clean glass of fresh water. She grabbed the glass from him and downed the whole thing in a few long swallows. Then she replaced the glass on the bar.

The gunfighter watched her, amused. He didn't smile, but there were small lines around his eyes when he squinted that made him look like he was laughing at the world. "You want another one?"

Abby was sure it might be a mistake to say 'yes,' but she was already beholden to him for the first one, so how much worse could it get? "Yes, please."

The gunfighter put two more shiny coins on the bar. The barkeep, apparently embarrassed about charging her, pushed the coins back to the gunfighter and gave her another glass of cool water.

He folded his beefy arms and studied the gunfighter. "You gonna order a drink or you drinking
water,
too?"

The gunfighter scratched the razor stubble under his chin.

"Bring me a shot of whiskey and leave the bottle."

"Only bring the good stuff." He winked, but it somehow conveyed a hidden threat.

The barkeep disappeared into a backroom concealed by a torn piece of gray fabric. Abby was alone with the gunfighter.

"Thank you for the water."

The gunfighter eased onto the stool next to her. The faint scent of gunpowder and wood smoke filled her senses. "You waiting on a coach or just get off one?"

The Wild Ones by M. Leighton
The Fall (Book 5): Exodus in Black by Guess, Joshua
Nazis in the Metro by Didier Daeninckx
Fertile Ground by Rochelle Krich
Straight from the Hart by Bruce Hart
SAVAGE LOVE (A Back Down Devil MC Romance Novel) by Casey, London, James, Karolyn
The Key to Starveldt by Foz Meadows
Underground Warrior by Evelyn Vaughn
Gandhi Before India by Guha, Ramachandra
Sing Like You Know the Words by martin sowery