Read Abducted by a Prince Online

Abducted by a Prince 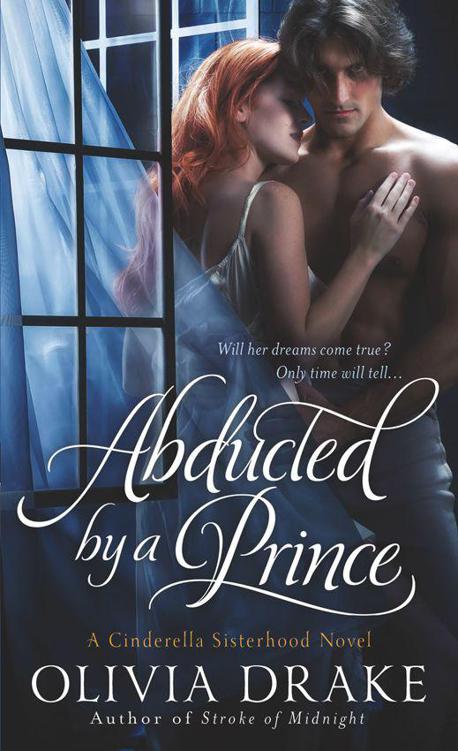 Praise for IF THE SLIPPER FITS

“This is a travesty,” said Walt Stratham, Viscount Greaves. “I demand a rematch at once.”

“We’ll discuss the matter in private.” Noting the curious glances from several club members in the corridor, Damien Burke ushered the irate man into his study and closed the door.

The spacious chamber featured a claw-footed desk on a Persian rug, the finest that money could buy. At this late hour, the tall windows showed pinpricks of light against the darkness of the city. The scent of leather bindings came from the bookcase behind the desk. On the opposite wall, a gently hissing fire warded off the February chill.

No expense had been spared on the décor. Damien had fought long and hard to acquire the trappings of the upper crust. While his fellow Eton graduates had inherited their wealth, he had started out with nothing. He had accrued his own fortune, first by his skill at gambling, and then by prudent investments in shipping, property, and this club.

With ruthless resolve, he had built Demon’s Den into the most fashionable gaming site in London. Here, gold flowed freely from the pockets of the aristocrats into his coffers. If the nobility barred him from their drawing rooms, then by God, he would make them pay for the privilege of occupying
his
establishment.

In particular, this man.

Ignoring the pair of chairs by the hearth, Damien strolled to the desk, took a brown leather pouch from his pocket, and tossed it onto the polished surface. The ivory counters inside made a satisfying clink.

The viscount glowered at the sack. No wonder. The sum of his losses represented a full five years’ worth of his quarterly allowance from his father, the Earl of Pennington. The earl had a reputation as a harsh, miserly man. With the expense of launching a daughter into society in the coming season, Lord Pennington wouldn’t be amenable to making loans to his profligate eldest son.

Walt faced a grim future hounded by creditors. Not even his status as heir to an earldom would save him. His only recourse would be to agree to the terms that Damien would present to him in a moment.

But first, Damien wanted to savor his victory.

He purposely took his time opening the sack. Walt had changed little since their school days; he still exuded the inborn superiority of the upper class. But now the hazel eyes beneath a thatch of ginger hair revealed a telltale trace of panic. Over the years Damien had taught himself to read the nuances of mannerisms that betrayed a man’s thoughts. A slight tic or nervous gesture, a tapping of the fingers or the lifting of an eyebrow, all served as clues to the cards in his hands.

Damien had employed that talent tonight to reel in his prey. He had craved this moment for over fifteen years. However, unlike the hotheaded schoolboy he had once been, he kept his expression cool and his emotions disciplined.

He poured the little discs into a heap on the desk and began to stack them into neat piles. He didn’t really need to add up the counters; he already knew the precise amount of his winnings. Rather, the action was designed to further fray Walt’s nerves.

“It’s time to settle your debt,” Damien stated. “There’s paper and pen for you to write a bank draft to me.”

Walt made no move to avail himself of the quill and inkpot placed at the corner of the desk. He elevated his chin to a disdainful angle. “The devil you say! If you were a gentleman, you’d grant me the chance to win back my funds.”

“I’m afraid that wasn’t our agreement. It was winner take all.”

“Only because I thought—”

“You thought I’d be an easy mark.”
Just as I was at Eton
. Damien had been small for his age back then, alone in the world, a charity student among the hordes of privileged boys from the best families.

Walt nervously gripped the lapels of his forest-green coat. “This is your club. You must have rigged the game.”

Damien gave him a caustic smile. Walt had always been quick to blame his own failings on others, particularly those he considered to be his social inferiors. He would never have dared to fling such an insulting accusation at a fellow gentleman. As much as Damien would have liked to avenge the slur with his fists, he knew that violence would be antithetical to his purpose.

“I allowed
you
to deal each hand,” he said. “So if there was any cheating at all, it must have been done by
you
.”

“What blather! You marked the cards somehow.”

“And you inspected the deck before the game commenced. Now, enough of your excuses.” Damien nudged the paper and pen toward him. “Write the bank draft.”

Walt shifted from one foot to the other. “There’s no point,” he said sullenly. “I haven’t sufficient funds in my account.”

They were making headway, at least, since he appeared to have abandoned his false accusation of cheating. He would soon realize that Damien had no interest in fleecing Walt.

At least not of his money.

Damien strolled to the chair behind the desk. “Ask your father for a loan, then.”

“Absolutely not! He despises gambling.”

“Indeed? Then it seems you’re in quite the quandary.”

Walt groped for the quill and jammed the sharpened tip into the silver inkpot. “I’ll write you an IOU if I must,” he said through gritted teeth. “That will have to suffice.”

“No. I’m afraid it won’t. Let me be perfectly clear. I will have my payment before the week is out.”

“Blast you!” Walt tossed down the pen so that black ink spattered the paper. “If you intend for me to sign my soul over to some dodgy moneylender, think again!”

Damien seated himself in the desk chair and steepled his fingers beneath his chin. The time had come to get an answer to the question burning inside him. “Very well,” he said. “Since you have no funds, I’ll allow you to repay me in another way.”

The hint of desperate hope in the man’s voice gratified Damien. “You have something of mine in your possession. If you return it, I’ll forgive the entire debt.”

Walt frowned. “Something of
yours
? Why, I’ve scarcely seen you since we left Eton over ten years ago.”

“You stole it from me while we were at school. If you rack your brain, perhaps you’ll recall the incident.”

Damien certainly did. The memories of that long-ago time burned like a canker inside him. An impoverished orphan, he had been taunted and bullied by the other boys. Perhaps his situation wouldn’t have been so dire had he hailed from a highborn family that had fallen on hard times. But his ancestry had been—and still was—an utter mystery.

A matronly woman he’d called Mimsy had raised him in a tiny flat in the London borough of Southwark. Mrs. Mims had taught him proper speech along with a rigorous slate of academic lessons. Perhaps that was why, even as a small boy, Damien sensed he was different. He didn’t fit in with the scruffy, unschooled children who ran free in the neighborhood. At times, Mimsy hinted that his father had royal blood. She spun tales of princely heroes slaying dragons and told him that he, too, must always be brave. As he grew older, he began to ask questions about his absent parents. Mimsy would offer only a vague story that he’d been given to her for safekeeping.

If he probed too persistently, her face took on a worried look that soon silenced him. Not even to satisfy his curiosity would he distress Mimsy. She was all he had in the world.

One day, they boarded the mail coach to Windsor and visited Eton College, where he sat in a stuffy room and took a long examination with numerous written essays and pages of mathematics problems. Afterward, she consulted with one of the headmasters in an ivy-covered building while Damien waited on the stone steps outside, watching the older boys walk past in chattering groups. They looked posh and unapproachable in their formal garb, making him keenly aware of his own shabby attire. When Mimsy came out, she informed him that he had been accepted as a pupil at the boarding school. He protested vehemently at the notion of being left among strangers, but Mimsy was adamant.

Before leaving, she placed a delicate gold chain around his neck. From it dangled a small iron key which he was told to hide beneath his shirt. “I’ve been waiting for the right moment to give this to you, my little prince. When I took you in as a babe, it was tucked in your blankets.”

The key fascinated Damien as he examined it closely. “Did it belong to my father?” he asked. “Where is the lock that it fits?”

“You’ll learn everything someday. It’s all written down in a letter. In the meanwhile, you must guard the key. Never, ever show it to anyone. You’re to study hard and make me proud.” After a tearful hug and the promise of holiday visits, Mimsy trudged out the school gate.

Just before Christmas, the headmaster informed Damien that Mrs. Mims had died from a sudden illness. The news was delivered coldly, without a care that Mimsy was the only mother Damien had ever known.

After lessons that day, he stole outside so that no one would witness his tears. It was bad enough to be taunted for being a charity pupil without adding “sniveling infant” to the list of his sins. He sat among the barren rhododendron bushes with his back to the wall of the cloisters. The wintry cold bit through his short coat, and eventually, his grief spent, he scrubbed his sleeve over his damp face.

Reaching into his stiff-collared shirt, he drew out the key and traced it with his fingertip. One end had three teeth, the other end a little brass crown stamped into the iron and surrounded by a design of curlicues.

With Mimsy gone, this key was the sole link to his past. But she had never explained its significance. Did the crown verify her claim that he had royal blood? Damien wanted to believe it. He wished with all his might that he was a prince with enough riches to draw envy from all the other boys. Perhaps the key opened the door to a treasure room in a castle somewhere.

Visions of gold crowns and heaps of glittering jewels filled his imagination. Then another thought absorbed him. Maybe his father, the king, was imprisoned there, waiting for his son to rescue him …

The scrape of footsteps yanked him out of the fantasy. Damien froze with the key clenched in his fingers.

Walt Stratham approached with two of his hulking cronies. From the moment of Damien’s arrival, they had singled him out for their tormenting. “Hey,” Walt called. “Is that a necklace you’re wearing? You must be a girl in disguise.”

While the other boys chortled, one of them imitating mincing feminine steps, Damien stuffed the key back inside his shirt. Too late.

Walt made a wild grab for the gold chain. “Give me that.”