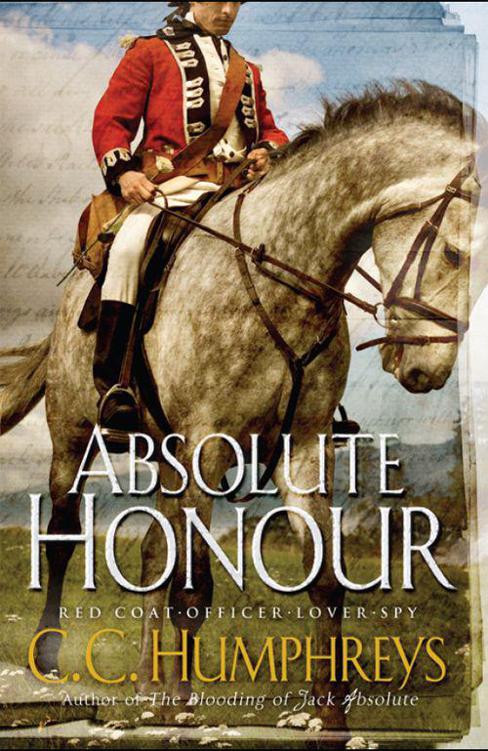 ‘Absolute Honour
is a thrilling book. A worthy companion to the previous Absolute titles and a rollicking stand-alone adventure … the novel’s
twists and revelations are handled skilfully, but what comes through most vividly is a sense of joy … it’s a sheer delight
to read’

THE BLOODING OF JACK ABSOLUTE

‘A roaring adventure whose pages are remorselessly consumed … In this prequel, Humphreys begins the finest series of historical
novels since O’Brian’

‘[A] most satisfying novel. Humphreys makes writing historical fiction seem easy. He brilliantly combines meticulous research
with a breakneck pace and a terrific sense of humour’

‘Falling somewhere between the novels of Bernard Cornwell and Wilbur Smith, C. C. Humphreys has fashioned a rollicking good
yarn that keeps the pages turning from start to finish’

C. C. Humphreys was born in Toronto, Canada, and grew up in London. An actor for twenty-five years, his leading roles have
included Hamlet and the gladiator Caleb in the miniseries
Anno Domini,
as well as Jack Absolute in Sheridan’s
The Rivals.
His plays have also been produced in the UK and Canada. A schoolboy fencing champion, and later a fight choreographer for
the stage, Chris turned his love of swashbuckling towards historical fiction. His first novel,
The French Executioner,
was shortlisted for the CWA Steel Dagger. The sequel,
Blood Ties,
was published in 2003. His third novel,
Jack Absolute,
began the series about the master spy, followed by
The Blooding of Jack Absolute. Absolute Honour
is Jack’s latest rousing adventure. Chris lives in Vancouver with his wife and son. Visit his website at
www.cchumphreys.com.

The Blooding of Jack Absolute

A Cage Without Bars

Glimpses of the Moon

That draws in raw and unexperienced men

To real mischiefs while they hunt a shadow

Part One: The Irish Grenadier

Chapter One: The Widow

Chapter Eight: All the World’s a Stage

Chapter Ten: The Pleasures of the Town

Chapter Thirteen: Hail to the King

– PART ONE –
The Irish Grenadier
– ONE –
The Widow

A frigid wind blew off the shore, sending the waves that had crashed against the dock back across the harbour, bobbling the
ships there like apples in a barrel of cider. Shrugging ever deeper into his coat, Jack Absolute watched two of the three
vessels make ready to depart. Men scrambled along yards to unfurl the sails, others worked the capstan; an anchor broke surface
and was laboriously hauled the last few feet. On the third ship, however, the one on which his passage was booked, there was
no such activity, though he knew the master of the
Sweet Eliza
was as keen to put to sea as the others. The jolly boat had rowed out to it not ten minutes before with some last provisions,
the boatswain’s mate shouting that they would return for him shortly. Furthermore, it was added, if the last passenger was
not dockside by then, they’d throw his goods into the harbour and sail without him.

Jack sighed. He should have gone with them. But his impatience to be aboard had little to do with the prospect of the voyage
itself. He had vomited steadily for the first two weeks of the sailing to Canada eighteen months before and then, he’d been
informed, the seas had been positively calm. No, he just hated farewells. All that could be said – and done – had been said
and done at daybreak.

‘Does such a sigh indicate, perhaps, a change of heart, Lieutenant Absolute?’

Jack took a moment to compose his face before he turned to her. She need not see how keen he was to be off at last. For all
she had given him, he owed her a sadness equal to her own.

‘Despite all that is on offer here?’ She raised her face, those astonishing azure eyes peering up at him from beneath the
white bonnet’s fringe. ‘I speak of our successes in trade, of course.’ Her gaze dropped again, fixing on the gloved hands
resting demurely on her black cloak.

You speak of our bodies hotly pressed together, Jack thought. Not three hours previously, before her servants stirred at dawn
and Jack had to creep back to his own bed, she had woken him as she always used to do, with busy fingers and lips under his
nightgown. And this in spite of her recent tendency to awaken nauseous. Indeed, Jack had barely slept. If there had been something
to sink onto dockside he would have done so, his knees felt so weak.

‘Yet you know, madam,’ he said, ‘that once I have discharged my duty to the King …’

He trailed off, disturbed by the slight shake of her head. It had been a comforting myth, this idea that, his messages delivered,
he would resign his commission and return to her bed and her business, both of which he’d immersed himself in during the months
he’d been in Newport. General Murray’s dispatches, given to Jack in Montreal the previous September when the French surrendered
there, were old news now. King George would have been informed of his army’s final victory by other means; while Jack, who
was meant to bear the joyous news, had missed the last autumn sailings – first in Boston, then here – and had been forced
to wait for the first of the spring.

They both knew the lie, even if neither of them stated it.
And yet, even though he was ready for the off, was this not as poignant as any farewell could be? For during those few months,
what a partnership they had made, in and out of her bed. He looked at her now, saw her as the sailors must have seen her,
glancing once, glancing away, just as he had first glanced and dismissed her – a Quaker woman, in her uniform of black dress
and white bonnet, not a hair astray beneath it which could hint at anything other than purity, not a trace of paint upon the
full lips, around those eyes. He too would never have looked again had not business forced him into her company for longer
than that first glance.

He studied her now and blessed the Absolute fortune once again. Since Murray had assumed he would be homeward bound in weeks,
he had provided Jack with a uniform, a berth requisition and a mere five pounds in coin – enough to see him aboard and little
more. Jack, after a year’s hard campaigning, had felt quite justified in drinking and gambling most of that away on his first
three nights in Boston. When he’d been sent on to Newport and the hope of a ship, the last of the coins had been swiftly swallowed
in inedible food and indifferent lodgings. There was no authority to issue him with more – Newport was a trading town, not
a military garrison. A few grim nights followed, living on credit and lies. Yet there was little doubt that he would soon
be evicted even from the poor boarding house, with winter and hunger biting hard. He’d survived the previous Canadian winter
in a cave with his Iroquois blood brother, Até, and had considered those lodgings uncomfortable; but they were a vision of
warmth and plenty compared to what a penniless soldier could expect in frigid Rhode Island.

Then that fortune had smiled. Loitering outside a store, wondering if he should go in and finally sell the skin of the bear
he had killed that previous winter, he heard a familiar language being spoken: the Iroquois Ate had taught him. A
storekeeper and an Indian were engaged in hot debate, each speaking their own tongue, each descending swiftly into insult
and threat. Jack had intervened, ascertained that the two were actually close as to price, and helped them settle the deal.
His cut had been a meal from the storekeeper and, after a few celebratory jugs of Newport’s own fine Guinea rum, an offer
from the Iroquois – a Seneca named Thayada – to accompany him and some of the local Indians on a hunting and trapping trip,
and then to help them broker the best price for their goods when they returned. Jack, fed up both with poverty and the piety
of the town – the churches outnumbered the taverns three to one – readily accepted.

When they came back two months later, however, with a hundred ermine skins and a welcome supply of deer meat, the storekeeper
could only offer them credit. When Jack, on the natives’ behalf, refused, he’d been sulkily directed elsewhere.

‘You’m be best t’ go see the Widow Simkin, then,’ he spat. ‘She’s as rich as a whorehouse keeper and twice as holy as God.’

The Widow Simkin. She stood before him now as she had that first time, when he’d paid her so little attention: head downcast,
hands clasped, unspeaking. He had soon learned from her that silence was like a sword, luring an opponent off true. She’d
once taken him, in an effort to bring her lodger to God, to a Quaker service. They’d sat in complete silence for over two
hours! And she had gotten the better of him in their first dealings by saying almost nothing. Thayada and the Nippising Indians
he led had seemed content, however, and had departed to drink most of their profit. He would have joined them if the Widow
Simkin had not finally asked a question. She’d looked up and Jack had noticed, for the first time, those eyes. ‘I am about
to break bread, Lieutenant Absolute. Perhaps you
would care to join me?’ Jack was thirsty after two months in the woods. But something in those eyes, beyond their colour,
had made him accept.