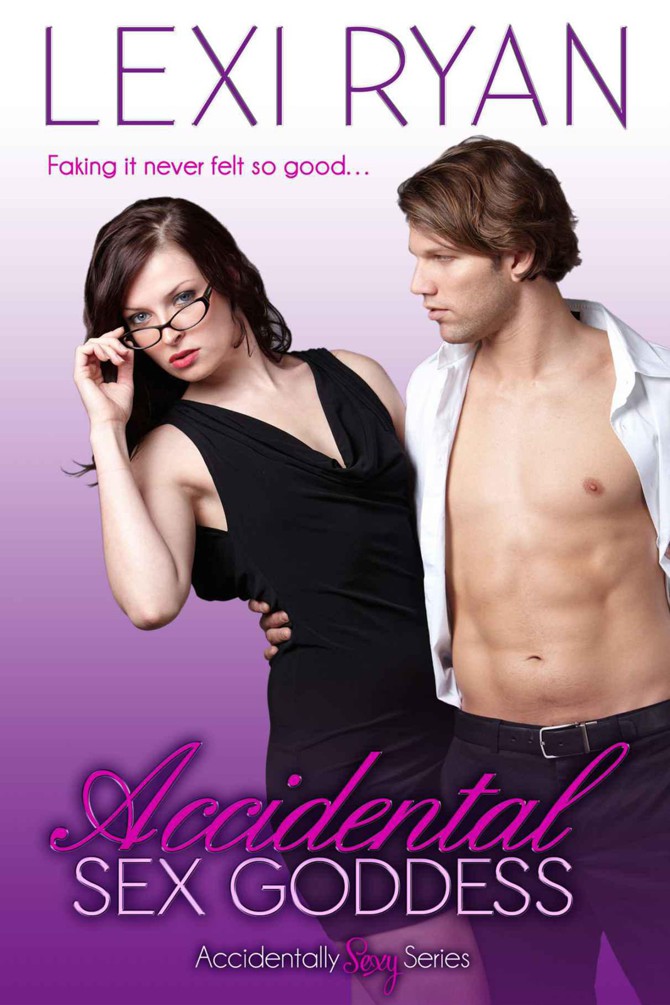 All rights reserved. This copy is intended for the original purchaser of this book. No part of this book may be reproduced, scanned, or distributed in any printed or electronic form without prior written permission from the author except by reviewers who may quote brief excerpts in connection with a review. Please do not participate in or encourage piracy of copyrighted materials in violation of the author's rights. Purchase only authorized editions.

This book is a work of fiction. Any resemblance to institutions or persons, living or dead, is purely coincidental.

For my mom, who gave me my love of reading, my first romance novel, and the very best example of what it means to be a strong woman.

“Do you consider yourself a Sex Goddess?”

Reese Regan looked up at one of the most influential women in Chicago and said, “Excuse me?”

Halie McCormack tucked a lock of platinum hair behind her ear. “Do you consider yourself a Sex Goddess?”

Was that a trick question?

Reese chewed on her lip. Was there a
right
way to answer that question when it was asked by the president and founder of Sex Goddess, Inc.? “I—I don’t know.”

Halie smirked. “Try it on for size.”

She tapped the brochure in Reese’s hand. “The first step of my program is the only step that is the same for everyone. Say it out loud.”

Reese squirmed.
Do I have to?
Probably, if she didn’t want to alienate the woman who held in her manicured hands the success of the WJRK Charity Masquerade Ball.

“Say it like you mean it,” Halie said. “Saying it doesn’t help if you don’t
believe
it. Try again.”

The programs at Sex Goddess, Inc. were the latest “It Girl” trend in the Chicago area. It was Reese’s job to get the company involved in WJRK’s next big event—even if it meant doing a pole dance in the middle of a business meeting.

Halie grinned. “It makes you uncomfortable to say it out loud, doesn’t it?”

“Oh, no.” Why would it make her uncomfortable? It was only completely awkward. “You just surprised me. I mean, I’m here professionally, and it didn’t seem very professional to—” She stopped at Halie’s eyebrow raise. “Yes, it made me uncomfortable. Sorry.”

Halie shook her head as she walked behind her desk. At nearly six feet tall—five foot nine of which was leg—she moved with the grace of a dancer as she lowered herself into her chair. “Do you realize you’ve apologized twice in the last sixty seconds?”

Halie chuckled. “You have nothing to apologize for. It’s my job to point that out. Most women have had their inner Sex Goddesses drowned by society and the pressure of being everything to everyone.”

Reese nodded. Probably better that than explain she’d never had an inner Sex Goddess to drown. If she had, it had been a suicide drowning. The note left behind probably read, “
Too inconsequential to go on
...”

“Tell me about your goals, Reese.”

Reese forced a smile and took a seat. She was going to be here awhile. This was supposed to be easy—a quick chat to iron out an agreement between Sex Goddess, Inc. and the radio station. But no. Back to square one.

“Each year WJRK holds a charity masquerade ball on New Year’s Eve. This year, we’re raising money to support the woman’s shelter, Almost Home, hoping to raise enough to build a much-needed addition. Sex Goddess, Inc.’s sponsorship of the event would go a long way to help us get there.”

Halie nodded. “Very noble, but what about a personal goal?”

Reese stared at the woman—a model-gorgeous trust-fund baby with a Bentley and boyfriend who played for the Chicago Bears. Had she ever had to set a personal goal in her whole life?

“Something totally unrelated to your work. A goal that
Reese
wants for
Reese
.”

Halie had done this during an interview with Oprah Winfrey. Question after probing question until Oprah had fat crocodile tears streaming down her face.
“But who
is
Oprah Winfrey
?”

Reese needed a personal goal. Fast. “I’d like to lose fifteen pounds,” she said, and—remembering Halie’s earlier comment—she tried to sound like she meant it.

Halie frowned and rubbed the back of her neck. “This is the problem with our society. Women think their self worth lies in the size of their jeans or some arbitrary number on the scale.”

“You’re right.” Reese should have seen this coming. After all, she had the inside track on the Sex Goddess, Inc. founder. Halie wasn’t going to let her out of the office until she embraced her oversized rear and declared size fourteen was the new six. “I’m sorry. I guess I’m not sure what you mean.”

“Huh. Your sister was right.”

Maybe inside tracks weren’t all they were chalked up to be. “My sister?”

“I’m going to be honest with you,” Halie said. “You know Tricia’s a good friend of mine, and we talk about you sometimes. I want to help.”

“You
can
help me—by sponsoring this auction.”

Halie propped her chin on her fist. “When was the last time you had sex, Reese?”

Wow.
She straightened. The words begging to fly off her tongue weren’t just colorful, they were DayGlo. “I’d rather not discuss this.”

Right
. “I apologize that my sister bothered you with details from my personal life,” she said, searching the conversation for the nearest exit.

“There you go with the apologies again. Do you ever wonder why you do that?”

Reese pushed forward. “I’m really counting on your support for the masquerade ball. What can we do to give Sex Goddess, Inc. the recognition it deserves during the event?”

Halie dropped her hands to the desk and clicked her nails. “Listen, I’ll sponsor your event.”

The relief that pumped over Reese was better than sex.

“
But
I didn’t get into this business for the money.”

Better than sex but just as short-lived.

“I want to help people, and after talking to your sister, I want to help
you
.” Halie pushed out of her chair. “I don’t push my program on anyone, but I’d like you to consider it.”

Reese stood and took it. “Thank you very much, Halie. This is such a good cause.”

“Of course. I’ll think about it.” The lie was so monumental, she was surprised God didn’t strike her dead.

“What is there to think about?”

My self-respect? My pride?
“This is just unexpected. May I call you Monday morning?”

Grabbing for her purse, Reese moved toward the door as fast as she could without running.

Halie handed her an envelope. “The first step is in there, followed by instructions of how to get the next.”

Eat a bucket of snails, run the Miracle Mile in nothing but body glitter, hang from her toenails over a pit of poisonous vipers
—the beginning of a very long list of activities she’d find more enjoyable than completing Sex Goddess 101.

“It’s your choice,” Halie said, “but imagine how different your life would be if you believed you were worthy of all you desire.”

With a sharp nod, Reese shoved the envelope in her purse and hurried out of the office and toward her car. The only rusted nineties-model sedan in the lot, it was easy to spot.

“Oh. My. God,” she muttered, collapsing into the driver’s seat. She yanked her cell phone from her purse and pressed the speed dial for her best friend.

“Reese! How’d the meeting go?” Mason asked. Her normal perky voice cracked into the exterior of Reese’s foul mood, but not much.

“I’m going to
kill
my sister!” She strangled the steering wheel only because Tricia’s neck wasn’t handy.

Mason laughed. “What’d she do this time? Steal all your sweats and replace them with silky lingerie?”

“Hmm...She scheduled you for a boob job without your knowledge?”

“I can’t handle the anticipation.”

Outside her window, Sex Goddess, Inc. headquarters loomed over her. Taunting. Today should have been easy, but her sister had turned it into a nightmare. “Apparently, during one of their Girls’ Nights, Trish took it upon herself to share her concerns about my sex life—”
or lack thereof
“—with Halie McCormack, and Halie just used our meeting as an opportunity to recruit me into her program.”

“Sex Goddess, Inc. Halie McCormack? As in, the one who you needed for your most important project of the year?”

Reese snorted. “Have you seen any pigs fly past your window today?”

Ben had Reese Regan on the brain. Which would be acceptable, considering she was his best friend, but the Reese in his mind was naked, moaning, and clawing at his back as he slid inside her.

“Hey, Ben, you gonna play?” Luke called from the pool table at the PitStop. His friend, also the bar’s owner, plopped the last balls into the rack.

“Of course.” Ben lined up his shot and made a weak-ass break.

How could Ben not be distracted with Reese on his mind? They’d met at his house for a workout this morning, like they always did, and she’d smelled so damn sweet, all lavender shampoo and flowery lotion. Who the hell smelled that good for a workout? “Damn it.”

A plan. Anything was possible with a plan. Ben just needed to remind himself why entertaining these fantasies was a disaster waiting to happen.

The three-ball spun into the corner pocket and clunked home. “Solids,” Luke called.

That was easy enough. First, there was—

“Where’s Reese tonight anyway?” Luke sunk another two balls. “I thought she was joining us.”

“She said she’d be late. She had a meeting with that Sex Goddess lady.”

Luke overshot, sending the cue ball in after the seven. He blinked at Ben. “Seriously?”

“Seriously. But not what you think. Sex Goddess, Inc. is sponsoring something for the station.” Ben positioned the cue ball and aimed for a stripe on the opposite side of the table.

He still had it. He lined up another shot and thought carefully.

Reason One: Six years after he’d first decided to keep things platonic, nothing had changed. Sex would mean something entirely different to Reese than it would to him. He sank another ball. She’d be thinking of wedding dresses and picket fences while he’d be thinking of hot bodies, sweat-slicked skin. All she’d want was commitment and all he’d want was to feel himself buried inside her.

“Cool your heels,” Ben studied the table, considering his strategy.

Reason Two: Reese was his best friend, and he had years of good behavior under his belt. He wasn’t going to ruin what they had just because she smelled like heaven on a stick and had an ass that made him want to weep.

He lined up another shot and watched, satisfied, as it rolled home.

He was cleaning the table when the bell jangled at the front of the bar.

The air filled with hoots of “Hawk! Hawk!”

Six foot five, two-twenty, Mark Hawk—tall, dark, and shallow—winked at a girl at the bar, pinched the ass of another, and gave a couple high-fives as he sauntered toward them.