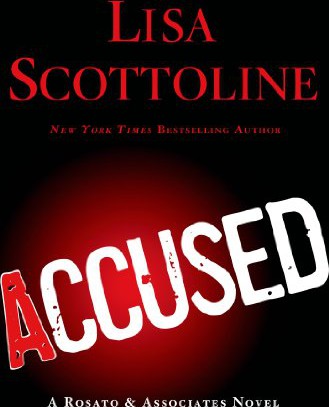 To my amazing daughter, Francesca

Let justice be done, though the heavens may fall.

CONGRATULATIONS!
read the banner, but Mary DiNunzio still couldn’t believe she’d made partner, even at her own party. She felt stunned, happy, and hopeful, ready to leave behind her doubts, insecurities, and guilt. Okay, maybe not her guilt. Guilt was like her handbag, occasionally heavy, but something she just felt better carrying around. Same with her insecurities, with which she had grown secure. As for her doubts, she remained doubtful. On second thought, it remained to be seen whether becoming a partner would change Mary DiNunzio at all.

Everyone she loved stood around her smiling, filling the small conference room at Rosato & Associates, and Mary smiled back, trying to find her emotional footing now that she was no longer on the terra firma of associatehood. Bennie Rosato, the superlawyer who was her former boss, had just become her alleged equal, and if that wasn’t confusing enough, her friends Judy Carrier, Anne Murphy, and Marshall Trow also worked at the firm. Mary didn’t know how she’d morph her friends into her employees, or if she could double their salary.

Her boyfriend, Anthony Rotunno, was standing to the right, the proverbial tall, dark, and academic, with thick wavy hair, a gorgeous smile, and eyes the dark brown of a double shot. He was a history professor who had just moved in with her, and they were still working out the closet situation and those little hairs he left in the bathroom sink. He had his arms around her parents, Mariano “Matty” and Vita DiNunzio, who had grown shorter and rounder, resting on either side of him like meatballs on a plate of spaghetti.

Mary’s father was bald and chubby in his white short-sleeved shirt and Bermuda-shorts-with-black-socks-and-sandals combination, dressed-down as usual, since the DiNunzios reserved fancy clothes for weddings or funerals. Her mother was in her best flowery housedress, with her white hair freshly teased into a cumulus cloud meant to hide her growing bald spot. Still her eyes retained their warm brown hue, doubtless the color of fertile Abruzzese soil, and the gray rimming her irises didn’t obscure the love in her gaze. Beside them stood The Three Tonys—her father’s friends “Pigeon” Tony Lucia, Tony “From-Down-The-Block” LoMonaco, and Tony “Two Feet” Pensiera—a trifecta of octogenarians who served as traveling uncles for Mary, occasionally helping on cases and generally clinging to her like cigar smoke.

“DiNunzio?” Bennie frowned, her eyes a concerned blue. She was six feet tall, of Amazonian strength and proportions, and had only gotten fitter since she was rowing again. Her unruly blonde hair was up in its topknot, and she had on her trademark khaki suit, so retro it had become hipster. “You don’t look happy.”

“I am, no, really, very happy.” Mary was still afraid of Bennie, but she expected that would change, in twenty years. “It’s just so overwhelming. I mean, thanks, all of you.”

“We love you, Mary!” Anthony winked at her.

“
Maria, ti amo
.” Her mother’s eyes misted behind her thick glasses, and her father sniffled, wrinkling his largish nose. It was the DiNunzio nose, which guaranteed its wearer more oxygen than anybody in the room.

“MARE, YOU DESERVE IT!” her father hollered, speaking in capital letters by habit, though his hearing aid sat behind his ear, more an earplug than a help. “WE’RE SO PROUD A YOU!”

The Tonys nodded, being good-natured in general, especially when the cannolis were free.

Bennie raised a styrofoam cup of champagne. “Then let’s toast to DiNunzio. I mean, Mary. And we have to change our letterhead. Here’s to Rosato & DiNunzio.”

“Wait, call me DiNunzio,” Mary blurted out. “I’m used to it, and let’s hold off on the letterhead, for now. I’m not ready yet. Let it sink in.”

“Mare, that’s silly.” Judy looked at her like she was nuts. She had superintelligent blue eyes in a round face, framed by yellow-blonde hair cut short and raggedy, so she looked like the beaming sun in a crayoned picture.

“Mary, really?” Anne frowned in a meaningful way. She was a model-pretty redhead in a dress that fit like Spanx. “Don’t give away your power. Remember your affirmations.”

Mary tried not to laugh. She didn’t have any power to give away, and she always skipped her morning affirmations, since I DESERVE ALL MY SUCCESS AND HAPPINESS made her late for the bus. “Let’s stick with DiNunzio and the old letterhead for now, okay?”

“Congratulations, DiNunzio!” Bennie grinned, and everybody raised their cups and took a sip, then hugged and kissed her, each one in turn, an aromatic blend of flowery perfume, CVS aftershave, and mothballs.

Marshall returned, leaning in the doorway, her face flushed with excitement. “Bennie, the desk just called from downstairs. Allegra Gardner is on the way up, and she’s looking for representation.”

“A Gardner, from the Gardner family?” Bennie’s face lit up, and nobody had to tell Mary the party was over. She was a partner now and knew that money trumped fun. The firm could use new business, and the Gardners were a wealthy family, like the Kennedys with a Philadelphia accent.

“Which one’s Allegra?” Mary asked, setting down her cup.

“I don’t know, she didn’t say, but she’s a real Gardner.” Marshall nodded, excited. “She just interviewed Morgan Lewis, but isn’t hiring them. She wants to see us about a new matter.”

“Great!” Bennie turned to Mary. “DiNunzio, we’d love to get business from that family. Do you mind if we cut your party short?”

“No, I agree,” Mary said, making her first partner-y decision. She wanted to start on the right foot, and agreeing was always good. Even partners sucked up, this being America.

“Good.” Bennie turned back to Marshall. “Set up the big conference room. Make sure there’s laptops, fresh pads, and pencils.”

Anne blinked her lovely green eyes. “I know the Gardners are super-rich, but how did they make their money?”

“It’s so old they forget,” Mary answered. “It’s just there, like oxygen. Or carbohydrates.”

Judy lifted an eyebrow. “Balzac said behind every fortune is a great crime.”

Bennie scoffed. “Balzac didn’t have a payroll to meet, and let’s not prejudge our clients. The Gardner family interests are run by three brothers, and they own banks, reinsurance concerns, and real estate development companies.” She turned to Mary’s parents, Anthony, and The Tonys. “Folks, please excuse us. I know you’re having dinner with Mary tonight, and you’re welcome to stay here until the meeting’s over. It won’t take more than an hour.”

“Alla good, Benedetta. We know you gotta work, we wait.” Mary’s mother waddled over and gave Bennie a big hug, except that Bennie was six feet tall and Vita DiNunzio was a foot shorter, so her face landed between Bennie’s breasts. When Bennie released her, she looked vaguely asphyxiated. “Benedetta, take cookies, cannol’,
sflogiatelle
.”

“SHE’S RIGHT, BENNIE, TAKE THE COOKIES AND PASTRY TO THE MEETING. WE’LL SIT AND HAVE ANOTHER CUPPA COFFEE.” Her father gestured at Pigeon Tony, who was already pouring another round of black. Tony-From-Down-The-Block was settling down with the sports page, and Feet was tugging over a chair to put up his feet, which, oddly, had nothing to do with his nickname.

“Thanks.” Bennie turned to Judy and Anne. “Ladies, we need as many people on our side of the table as she has on hers. Everybody to the big conference room for a dog-and-pony show.”

Anne set down her Diet Coke. “I’ll be the pony.”

“I’ll be the partner.” Mary brought up the rear, because she had to hug and kiss everybody good-bye, as was customary in South Philly, where hugs and kisses were like passports, required for all comings and goings. She hurried to the big conference room, which had one wall completely of glass, with an impressive view of the metallic ziggurat of One Liberty Place, the sharp spike of the Mellon Center, and the quaint figure of William Penn in his Quaker hat, atop City Hall. They all got busy setting up laptops, pads, and coffee, then Mary, Judy, and Anne arranged themselves on one side of the table with Bennie at the head, because it went without saying that she would run the meeting. She wasn’t the only partner anymore, but she was still the Office Mom.

Allegra Gardner was a slight young girl, only five feet tall, with bright blue eyes behind round plastic glasses. She had a small, straight nose, fair skin, and thin lips pressed over major orthodonture. Her hair was a nondescript brown, gathered in a loose double ponytail under a white cap that read,
APIARIST
. Mary didn’t know the word but she gathered it had something to do with bees, since Allegra also had on a white hoodie with a smiling bumblebee that said
BEE HAPPY
, which she wore with baggy jeans and low-profile Converse sneakers. Allegra had arrived alone, carrying a blue backpack on her narrow shoulders, apparently unfazed by the fact that she was outnumbered by legal firepower as well as estrogen levels.

Everybody took her seat after Bennie made the introductions, and Mary grabbed a legal pad to write notes to Judy. She was pretty sure that even partners wrote notes to each other, especially when they took meetings with children. It was confusing, and Mary couldn’t fight the feeling that Allegra needed a babysitter, not a lawyer.

Bennie smiled at Allegra, in an official way. “Before we start, are your parents coming?”

Mary wrote to Judy, ISN’T ALLEGRA SO CUTE? I DON’T KNOW WHETHER TO REPRESENT HER OR BREASTFEED HER.