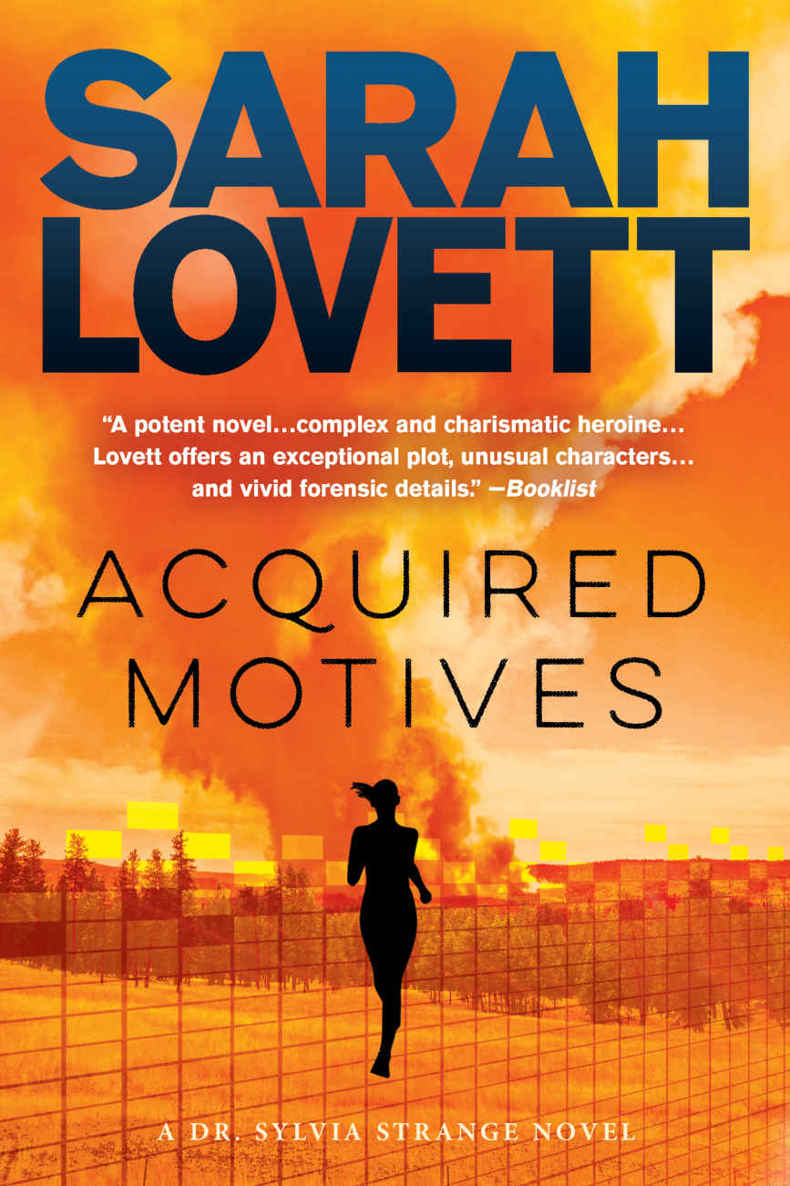 First published in the U.S. by Random House/Villard

This book is for Flor and Mon, and for Reilly and Robert

Special thanks to Theresa Park, Alexandra Greene, and everyone at The Park Literary Group—and to David Rosenthal

A
NTHONY
R
ANDALL DIDN'T
look like a self-confessed sadistic rapist. His large blue eyes were free of guile, his cheeks were tinged pink, his lips habitually worked themselves into a soft frown. He looked younger than his twenty-two years.

Sylvia Strange shifted in the hardwood chair where she had been poised for more than thirty minutes. The glare of the fluorescent lights made her head ache. Her navy silk skirt was creased. She hoped dark circles of perspiration weren't visible under the arms of her suit jacket. It was her job to maintain the illusion of control even when the courtroom resembled the inside of a pressure cooker.

Sylvia noticed sweat easing down Judge Nathaniel Howzer's throat to the collar of his black robes. The judge had summoned opposing counsel to the bench three times during the past fifteen minutes. Clearly, he wasn't pleased with the most recent turn of events.

Just days earlier, Erin Tulley, an officer with the New Mexico State Police, had admitted that Anthony Randall had been reeling under the effects of drugs and alcohol when he confessed to rape. The law demanded that confessions be knowing and voluntary—tricky when the confessor's system was toxic.

Immediately following Tulley's turnaround, the defense had filed a motion to suppress the confession. If granted, there would be no trial, and the defendant would walk. The judge had refused to render a decision on the motion until he heard the testimony of the evaluating forensic psychologist: Sylvia Strange.

As Judge Howzer conferred yet again with defense and prosecuting attorneys, the bailiff fanned himself with both hands. It had to be pushing ninety degrees in the courtroom. A female journalist in the gallery lifted a ponytail of graying hair above her neck and strained forward to catch the breeze from a portable fan. The nose and mouth of another reporter were covered with a white mask to filter out environmental impurities.

Behind the press row, the family members of the rape victim were huddled together. The victim's mother looked as if she was shell-shocked. Sylvia could hardly bear to glance at the woman.

Judge Howzer finished his murmured consultation with the attorneys. Sylvia took a deep breath to regain her focus as Tony Klavin, the defendant's attorney, approached the witness stand. Klavin was thirty-five, athletic, and aggressive; he committed every ounce of energy to this examination.

"Dr. Strange, at any time during the fifteen hours you spent with the defendant Anthony Randall, did you discuss his family history?"

Sylvia saw Randall seated at the defense table, his blond head held perfectly still. She said, "During the examining interview I obtained a clinical history to establish the individuality of the defendant's background, his family, education, and life experiences."

Tony Klavin nodded sagely and the dark curl that licked his forehead bounced ever so gently. He'd earned a reputation as a cunning and oily defense attorney by taking on offensive clients and winning their high-profile cases. He jammed both hands into his pants pockets and hunkered down. "Did Anthony Randall have a tragic childhood?"

"Objection." The prosecutor, Jack O'Dell, was on his feet. He shook his head in disgust. "Dr. Strange has not been qualified by this court as a dramaturge, Your Honor."

Tony Klavin touched the tips of his fingers together; his hands formed a triangle. "Dr. Strange, did Anthony Randall become a substance abuser when he was eleven years old?"

For a split second she locked eyes with the defendant; it was like looking into the eyes of something dead. Six weeks ago, during the final clinical interview at the jail, Randall had been cocky, convinced that his ability to manipulate would get him whatever the hell he wanted. He wasn't sophisticated enough to be cognizant of the MMPI-2 validity scales, which detected "fake bad" crazies—those hard-core cases who wanted the world to think they were too sick to take responsibility for their crimes. But he had a good handle on his sociopathic skills: deceit, control, exploitation.

To hear Anthony Randall tell it,
he
was the victim.

Sylvia felt the dampness between her shoulder blades, and one droplet of sweat slowly traveled down her spine. She ran her tongue over her lips and willed herself to speak. "Anthony Randall was hospitalized for alcohol abuse when he was twelve."

"At what age did he begin to drink?"

"Between the ages of ten and eleven."

"And did he also begin sniffing glue?"

While the attorneys argued another point of admissibility, Sylvia took a breath and centered her mind on the business at hand. In this case, she was a witness for the defense. As a forensic psychologist, she worked for prosecution, defense, or the court—whoever requested her services. Impartiality was a professional requirement.

Sylvia had evaluated hundreds of criminal offenders. She had heard enough truly horrific life stories to fill volumes. And most of the time, she felt empathy for the defendants. But Anthony Randall left her cold. He enjoyed inflicting pain.

Sylvia continued to answer Tony Klavin's questions, to build a case for Anthony Randall, the conduct-disordered child who had grown into a dysfunctional, antisocial adult. With each response, Sylvia felt her stomach muscles clench. Months ago, when she first read the police crime reports, she'd wept. Anthony Randall had beaten and raped a fourteen-year-old girl with a metal pipe. And then he'd left her for dead.

Flora Escudero had survived—just barely. But she had been unable to identify her masked attacker.

Sylvia was no proponent of the death penalty. It was an archaic, unjust system—racially and economically biased, outrageously expensive, imperfect, and inhumane.

But she couldn't deny the intensity of the primitive emotion that welled up inside her: she wanted Anthony Randall to die.

"Dr. Strange? I'll repeat the question." Tony Klavin was staring at her, puzzled by her slow response. "Was the purpose of your evaluation to determine the defendant's competency to stand trial as well as his mental state at the time of the incident?"

"When you questioned him about the incident, did he indicate whether or not he remembered making a statement to the police?"

"He said he couldn't remember much." Sylvia's voice was flat, stripped of emotion. "He said his memory was clouded and he was suffering the effects of Valium, marijuana, and alcohol."

"When Valium and marijuana are combined with alcohol, can they impair a person's judgment?"

"Could they impair an individual's memory?"

"Did Anthony Randall indicate whether or not he remembered making a confession to the police?"

The words lodged in her throat, and she glanced at the defendant. No one else would have seen it, but Sylvia was attuned to Randall's every movement. His left eye narrowed for an instant as the soft skin around it responded to a muscular contraction—an involuntary reaction—and even that minute loss of control was exceptional for Randall. The public Randall.

Sylvia heard the click and whir of cameras going off along the press bench.

"Could the defendant remember even one word of his so-called confession?"

"He said he was too intoxicated, too high."

The hum of voices in the gallery reminded Sylvia of cicadas. Judge Howzer's face darkened as he wordlessly castigated his courtroom. Silence returned.

"Dr. Strange, in your work, have you had the opportunity to observe substance abusers?"

"Yes, I've observed them in various stages of addiction, withdrawal, and recovery."

"The first time you met with Anthony Randall, what was he like?"

"His voice was a monotone, his mood was blunted, dull. He was depressed, and he said he felt suicidal."

"Is that consistent with the way someone would act who has recently withdrawn from drugs and alcohol?"

Although the heat in the courtroom was stifling, Sylvia felt cold. "It could be."

Tony Klavin stepped toward the witness stand. "Dr. Strange, Police Officer Erin Tulley has testified under oath that when Anthony Randall made his
alleged
confession on the night of April sixteenth, he was"—with a grim flourish he quoted slowly from the transcript in his hand—" 'stumbling around, sick and dazed, blacking out.'" Klavin paced a tight circle, making no effort to hide his scorn. "Does that sound like the behavior of a man who made a knowing confession?"

"Objection!" Jack O'Dell was on his feet. "This pantomiming and playacting is unnecessary and prejudicial."

"I'm sorry, Your Honor. I wasn't aware I was making
faces
."

Sylvia tried to stay focused on Klavin's line of questioning, but her thoughts kept coming back to Erin Tulley's turnaround. State Cop Tulley had shocked the state when she recanted earlier evidence concerning Randall's confession. By now, the rumor of choice was that Tulley had broken rank because she was dying in a gender discrimination lawsuit against the state police; she claimed she'd been denied promotion because she was female. The agency's response to the civil action was simple: Erin Tulley had spent only two years in uniform; a promotion to the Criminal Investigation Division would be premature for anyone—male or female—after two years' service.

But Tulley wasn't the kind of woman who would take a lonely fall. Pale, visibly distraught, and vehement on the witness stand, she had given the defense the wedge it desperately needed to demolish the prosecution's case.

And Sylvia felt as if she'd been set up to follow Tulley's act—her testimony would be the clincher, the last scene before curtain.

Tony Klavin interrupted Sylvia's racing thoughts. "Dr. Strange, at the time of the defendant's arrest, if he was under the influence of drugs and alcohol, would you say that any confession he made would be made knowingly?" For an instant Klavin had to work to hide his impatience with his witness.

"Thank you, Dr. Strange. We have no more questions, Your Honor."

Sylvia noticed the fleeting smugness that breezed across Anthony Randall's perfect features. For an instant, she felt her veneer of control slip—she hated the system, she hated her role in it, she hated Anthony Randall.