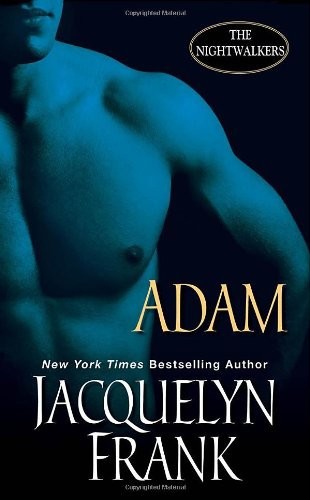 SHE WAS A VAMPIRE, AND VAMPIRES WERE NOT TO BE TRUSTED

To kiss her would be to break the law. He also had to consider that she was likely making sport of him, simply amusing herself at his expense.

“You have returned my weapon,” he said roughly. “Now you should go before you are discovered or before I change my mind and kill you myself.”

The idea made her smile, a slow curling of her lips on one side.

“You want to thrust your dagger deep inside me, Demon?” she asked.

“Would that it were a different world,” he heard himself murmur to her, dipping his head helplessly to brush his lips over hers. Such magnetism! He’d never felt anything like it! It was electric as it burst across his senses. He simply could not comprehend how he could feel so much need for a creature so unlike himself. “But it isn’t.”

Other Books by Jacquelyn Frank

SHE WAS A VAMPIRE, AND VAMPIRES WERE NOT TO BE TRUSTED
Other Books by Jacquelyn Frank
Title Page
Dedication
Prologue

For every last one of my readers.
You begged, harassed, threatened, cajoled, whined, and
pretty pleased your way into this book.
Enjoy!
(And yes, the bitch finally
gets it! ... Well, maybe. Muhahahaha!)

“Whosoever wishes to know the fate of Demonkind must consult these prophecies ...”

“... as magic once more threatens the time, as the peace of the Demon yaws toward insanity ...”

“... it will come to pass that in this great age things will return to the focus of purity that Demonkind must always strive for. Here will come the meaning and purpose of our strictest laws, that no uncorrupted human shall be harmed, that peaceful coexistence between races shall become paramount ...”

—Excerpts from
The Lost Demon Prophecy

“... it is therefore forbidden for any of Demonkind to mate with creatures who are not their equals, not of their nature, not of their strength and power. Those lesser creatures are ours to protect from ourselves, not to be violated in impure sexual abomination. This is the law and the will of nature. The dog does not lie with the cat; the cat does not lie with the mouse. Whosoever breaks this sacred trust must suffer under the hand of the law ...”

—Excerpt from
The Original Scroll of Destruction

“There’s too many of them!” Isabella cried out after a moment wasted in catching her breath. The dark ebony cloud of her hair was flung around her head in a wide arc as she whipped it around to look at her companion: her mate and husband, the father of her daughter, not to mention their son, whose impending existence they had only found out about a week ago. He guarded her back just as she guarded his in this fight, and together they were protecting the thing most precious to them both. “
Jacob!
”

The female Druid was forced to turn her back on her attackers as she saw that the odds she faced were nothing compared to his. No matter how strong and skilled she had become as a fighter over her years beside him, no matter how powerful an Earth Demon he was, they would never survive against such forces. Not alone.

But Jacob would not relent.

He
could
not relent.

It was not only because they were the Enforcers and it was their duty to fight these foul aggressors with every last breath in their bodies. It was because their daughter, Leah, was secreted away only a few yards distant from the ground they currently defended. Jacob would sacrifice his last breath before he would see his family harmed. Isabella would do no less.

Jacob reached for her between one smooth strike at the enemy and the next. He linked his arm through hers, and like the perfectly fitting cogs of a watch, she rotated over his back, her legs windmilling in dual strikes that stunned and stumbled enemies. When her feet hit the ground, she instantly stepped back so the heel of her left foot touched the heel of his right. They braced themselves in that back-to-back position as the forces around them circled like vultures. Fortunately, both fighters knew that baser instincts would prevent these Transformed Demons from organizing themselves with intelligence, cunning, or strategy. The situation was critical enough with their bloodlust berserking; if they were to work in tandem, they would have a horrifying advantage.

Even as Bella struck a mark with a petite arm that packed far more punch than would be expected in one so small, Jacob spread his hands out parallel to the earth, his fingers curling as if they were burying into the soil that, in actuality, was a good four feet below the thick stone under their feet. Shattered quartz and rich loam spewed up toward those commanding hands, starting in one place and rapidly exploding in a circle around him and his wife until they were being swallowed by a perfect cylinder of dirt, rock, and debris.

Isabella wasn’t afraid when the ground caved in beneath her and the earth literally sealed its lips above her head and swallowed her up. She instantly dropped down into the chute of the tunnel being burrowed through the soil, her husband sliding swiftly beside her as they fell. Even though she could see and hear the rumble of clean fill collapsing above their heads almost as fast as they fell, she was not intimidated. On the contrary, she was relieved. The monsters above them could never catch them now. It was all Jacob; every grain and every pebble being manipulated around them was under her husband’s artful command. He was the most powerful Earth Demon alive. The oldest of his kind. None of the Transformed Earth Demons above them could match the speed and accuracy Jacob used to manipulate the Earth around them, or the way the soil was repacked above them tighter than nature herself had originally done. Now their enemies would have to figure out how to find their way through tremendous amounts of earth in order to find them.

Finally they passed through what was once solid limestone before bursting out of the Demon-made tunnel and into a nature-made cavern. Jacob manipulated gravity so they landed gently on their feet, even giving Isabella an extra moonwalk bounce that made her laugh briefly in spite of their dire circumstances. Then she turned sharply around to face her mate.

“Easy,” her husband reassured her. “She’s just through the caverns. I pulled her down, too. What did you think I was going to do?” He reached out and swatted her backside as she hurried in the direction he had indicated. But despite the playful gesture and her smart look over her shoulder, they were both very aware that they weren’t safe yet. Granted, most of those above could not follow them, but some ...

“I pulled Jasmine into the caverns as well, but she’s hell and gone from here,” he warned his wife. “It’s going to take some time for her to reach us.”

Bella threw up a hand of acknowledgment, even though he already knew she had heard him and understood him. Understood they were on their own.

Isabella’s speed as she ran along the twisting corridor still amazed her. It had been six years since she had evolved from a human into a Druid, or rather, a hybrid of human and Druid. The power that had come with that alteration in her genetic makeup, including her ability to run with incredible speed, had been one of many blessings in her life since then. As she rounded a corner, she saw one of her blessings indignantly dusting off the soil the
other
blessing in Bella’s life had caused to get on her dress.

“Daddy, I’m dirty,” the five-year-old complained, the hands on her tiny hips and the jut of her lips all too reminiscent of her mother’s infamous gestures of pique. She completely disregarded the fact that she’d been in any danger.

“Sorry, angel,” Jacob apologized halfheartedly as he looked up toward the cavern ceiling, sensing the danger looming above them. “We have to make haste,” he said softly as he leaned in toward Bella’s ear.

Isabella was already scooping up her daughter as her husband’s hand fell into the small of her back to guide and hurry her.

“Mommy, I can walk,” Leah reminded her with her trademark stubborn independence, just as she always did when Isabella tried to carry her.

Of course, Leah let her
father
truck her around everywhere from dusk to dawn if that was his wish, and she never complained
then
, Isabella thought.

“Mommy is faster than you are, sweetheart, and we have to run,” Bella explained as she began to do just that.

She didn’t lose patience with her daughter’s distorted priorities. It wasn’t that Leah didn’t understand that there was peril around them, because she did. However, Leah had grown up watching her parents run into battle at the slightest threat to their home and homeland, their friends and family, or their monarch’s people. She was speaking like a child who wasn’t worried in the least about her safety because she knew her parents to be a mighty force, an undefeatable army of two that would never fail to protect her for as long as she lived.

There was a bursting change in the cavern’s air pressure, one that all three of them recognized; although in Leah’s experience, the force that created that sinus-snapping aftermath was always friendly.

This one was not.

Isabella skidded to a halt, shoving her daughter behind herself so suddenly that Leah’s dress hit the dirt once more.

Forever by Margaret Pemberton
Black Jasmine (2012) by Toby Neal
Fire and Ice by Lacey Savage
A Matter of Honesty by Stephanie Morris
With an Extreme Burning by Bill Pronzini
Mary McCarthy's Collected Memoirs: Memories of a Catholic Girlhood, How I Grew, and Intellectual Memoirs by Mary McCarthy
The Astro Outlaw by David A. Kelly
Razing Ryker (Dissonance Book 1) by James, Jordanna
Bleeding Violet by Dia Reeves
The Carrie Diaries by Candace Bushnell