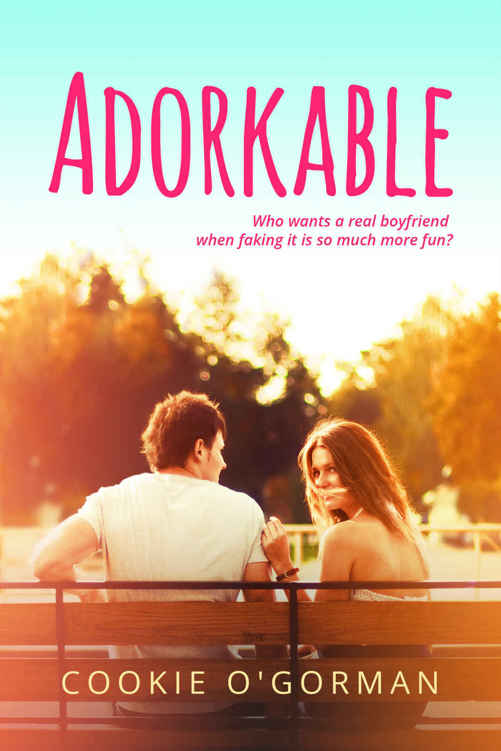 All rights reserved. This book is a work of fiction and any resemblance to any person, living or dead, any place, events or occurrences, is purely coincidental. The characters and story lines are created from the author’s imagination or are used fictitiously.

No part of this book may be reproduced, transmitted, downloaded, distributed, stored in or introduced into any information storage and retrieval system, in any form or by any means, whether electronic or mechanical, without express permission of the author, except by a reviewer who may quote brief passages for review purposes.

To my Aunt Pat

I love you more than cheese my dear

My mother thought I was a lesbian.

After she’d set me up with her boss’s nephew—who, by the way, chewed with his mouth open, tucked his napkin into his shirt bib-style, and stole the last dinner roll—I hadn’t thought it could get much worse.

Guess that’s what I get for being an optimist.

“Do you solemnly swear?” I’d asked.

She’d nodded. “When it comes to you, Sally Sue Spitz, I am done. I’m hanging up my matchmaking gloves as of today.”

Too bad she’d handed those gloves down to someone even more meddlesome.

Daisy Wilkins rang our doorbell at precisely 7:30 p.m. Mom let her in with a huge smile and introduced her as the daughter of Stella Wilkins, my mom’s eccentric hairdresser, adding “She’s from New York.” I didn’t know everyone in our small town (though it felt like it sometimes), but I’d have known Daisy wasn’t from Chariot just by looking at her. That Mohawk screamed big city.

“Nice hair,” I said as we sat down for dinner. The pink tips were pure punk, but the bleach blond roots were positively Malfoy-esque. Not just anyone could pull that off.

“Nice smile,” she said back—which I thought was sweet. It wasn’t everyday you got a compliment like that and from a complete stranger, too. Mom seemed pleased, and I’d assumed it was because she’d put an awful lot of money into my smile with the braces and headgear I’d worn for three years.

We were nearly done with dinner when things took a turn for the weird.

“So Daisy,” Mom said, “do you have a date for prom? You know, Sally still doesn’t have anyone to go with.”

I did a mental eye roll. Thanks, Mom. Let’s just advertise it, shall we: Sally Spitz, salutatorian of her senior class, President of the German Club, voted Most Likely To Be Terminally Boyfriend-less until the end of time.

“Not yet,” Daisy said, picking at her mashed potatoes.

She didn’t say so, but I suspected Daisy was a vegetarian. She hadn’t touched her steak, and her purse had a bright pink patch with the word PETA on it. That plus the dirty looks she kept throwing the beef on her plate were pretty big clues.

“You hear that, Sally?” Mom raised her brows. “Daisy doesn’t have a date either.”

“Hmm,” I said, reaching for my water, glancing again at the clock.

When was Hooker’s latest matchmaking-disaster going to get here? My bestie, Lillian Hooker, had dreams of becoming a professional matchmaker—which unfortunately meant I was her special project. Boys would do anything for her. This included having dinner with her BFF and said BFF’s mother on Sundays. Tonight’s “date” was already an hour late. Not that I wanted to meet another guy in the long line of setups, but the Southern part of me revolted at the thought of his rudeness. The girly part of me was just ticked at being stood up.

“Maybe you two could go together?”

Mom shot me a stern glare. “I said, maybe the two of you could go together. I mean, if Daisy’s not going with anyone, and you’re not going with anyone...” she trailed off, looking at me expectantly. When I just stared, she added, “Oh, come on, Sally. You both need dates, right? Why wouldn’t you go together? I think you and Daisy would make a cute couple.”

I simply blinked. At the time, I was incapable of anything else. She’d said “couple” like she meant…

“Very cute,” Daisy agreed, and when I looked to her, she winked. Winked!

I swallowed. Good grief, that was
exactly
what she’d meant.

“Mom, can I see you in the kitchen?” I was out of my chair and steamrolling toward the door before she could answer.

When Mom came in behind me, she sounded put out. “That was very rude, Sally. Now Daisy’s going to think we’re in here talking about her. What’s so imp—”

I rounded on her, voice incredulous. “Mom, you think I’m a
lesbian
?”

“Well, aren’t you?” she said confused.

“
No
!” I shot a quick glance at the door to make sure it was still shut. Seeing it was, I repeated, “No, I’m not. Not even a little bit. Mom, what...what would make you think something like that?”

“Lillian asked, and I couldn’t rule it out.” She shrugged, looking down at her hands. “I don’t know.”

“It had to be something,” I persisted. I needed to know. If Hooker and my own mother had gotten that impression, maybe other people had too. Just how far did this misconception go?

“A lot of people don’t have boyfriends.”

“You’re going to be eighteen.”

“Those are for the kids at work!”

“—and then there’s the whole Becks issue.”

“What Becks issue?” I said.

“Sally, that boy is prime real estate to any female with eyes. You’ve been best friends with him since grade school, and never once have you said a word about how attractive he is.”

“Becks is Becks,” I said diplomatically. “And don’t think I’m not going to tell him about the creepy comment you just made. Please, go on.”

“You never go for anyone Lillian sets you up with,” she huffed.

As soon as she said it, I knew this was the real reason.

“That’s because they’re either criminals or total idiots,” I pointed out.

“That’s not true,” Mom argued. “There was Oliver Morgan—”

“Who constantly referred to himself in the third person.”

“Currently in ISS for trying to steal Funyuns out of the school vending machine.”

“He couldn’t remember my name, Mom. Kept calling me Sherry, even after I corrected him—eight times.”

Mom would not be sidetracked. “Then there was Cromwell Bates.”

“Well, there you go,” I said, and she pursed her lips. “The name alone makes him sound like a serial killer. I mean, who knows? Maybe his parents know something we don’t. Besides, he spit on me when we first met.”

“He didn’t do it intentionally.” Mom lifted her hands in a helpless gesture. “Sally, the poor boy has a lisp.”

I shrugged. The feel of Cromwell’s spittle on my cheek still gave me nightmares. At the time, I’d been afraid of hurting his feelings, so I’d just let it stay there, forcing my hands not to wipe at my skin as I felt condensation settle into the pores. First thing I did when he left was wash my face, three times for good measure.

“You know...it wouldn’t bother me if you were.” Mom hesitated, tone shaky but sincere. “Gay, I mean.”

“But I’m not,” I said again. “Just because I haven’t gone for any of the loser guys Hooker’s sent my way doesn’t mean I’m into girls.”

Mom laughed suddenly. “No,” she said, “no, I guess it doesn’t.” She took my hand and met my eyes. “I just worry about you, Sally.”

I gave her hand a squeeze. Mom had been saying that since my fifth birthday when I’d asked for a light saber instead of a Barbie doll.

“And don’t be too hard on Lillian,” she added. “She reminds me of me at that age, always trying to get people together.”

“I wish she wouldn’t,” I muttered.

“Her heart’s in the right place.”

“I don’t know why she feels responsible for my love life. Mom, I’m only seventeen. There’s plenty of time for me to find the right guy...and it
will
be a guy,” I reiterated just to be clear.

She shrugged. “One of these days, it could be The One, waiting right out there on our doorstep.”

I’d heard that one before. As a wedding planner, Mom really couldn’t help herself. It was natural for her to want to put soul mates together. Her job was to give couples their happily ever after. She and Hooker were like two peas in a pink-heart-shaped-love-drunk pod. I just wished they’d use their talents for good instead of trying to match me up all the time. “Don’t go planning my wedding just yet, Mom.”

“Oh, please, I’ve had your wedding planned since you were in the womb.”

I couldn’t hide my look of horror.

“Relax, I’m just kidding,” she laughed. “The truth is I don’t want you to be alone.” Her eyes went from sparkling to hollow. “Believe me, it gets old after a while.”

It was moments like this that reminded me how much I despised my father.

“Better than being tied to a lying, cheating son of a b—”

I widened my eyes all innocence. “What? I was going to say banker.”

“Sure you were.” Mom shook her head, looking toward the kitchen door. “Poor Daisy, I feel terrible about all of this. I think she really liked you, Sally. She’s going to be heartbroken when she finds out. What should we say?”

Daisy and I had gotten along fine, but I wasn’t so sure about the whole heartbreaking thing.

I gave Mom’s hand a pat. “I’ll let her down gently,” I said as we walked back into the dining room.

Daisy was typing something on her phone, texting someone. When we came in, she looked up and said, “Sorry, but I’ve gotta go.” She stood, and I followed her to the door. “Mom just confirmed my flight. It looks like it’s been moved up a few hours, so we’re going to have to leave really early tomorrow. It was good meeting you, Sally.”

“You, too,” I said, noticing only now that Mom had somehow managed to disappear. Apparently, she was leaving this up to me. Well, I supposed there was only one way to say it. “So Daisy, there’s kind of been a mistake. As much as I liked talking to you, I’m not—”

Daisy placed a hand on my shoulder, giving me a sympathetic look. “Listen, no offense, okay? You’re cute and everything, but you’re a little…dorky for my tastes.” I opened my mouth, but she went on, “Oh, don’t get me wrong. I’m not saying that as a bad thing. It’s just not what I’m looking for right now. You understand, right?”

I swallowed then said, “Of course.”

She leaned in and gave me a peck on the cheek. “If you’re ever up in New York, give me a call, okay?” As she opened the door, she glanced back over her shoulder. “We’ll do lunch or something.”

I stood there stunned, watching her taillights disappear around the corner, until Mom came up behind me a few minutes later. “So, how’d it go?”

I was indignant. “She called me a dork. She just met me. How could she possibly make that call after only one dinner?”

Mom eyed my outfit critically and then said, “You do realize you’re wearing your Gryffindor jersey, right?” I opened my mouth to tell her it was a collectible straight off the Harry Potter official clothing line, but Mom cut across me. “And you know that when Daisy walked in, you had your right hand up, fingers splayed in that strange
Star Trek
signal.”

Yeah, I thought, but that was just because I’d assumed it would be my date walking through the door—which I guess, it actually had been—and I’d wanted to scare him off. In my experience, boys didn’t look twice at girls who employed Trekkie references, let alone wore Potter memorabilia.