Authors: Bride of a Scottish Warrior 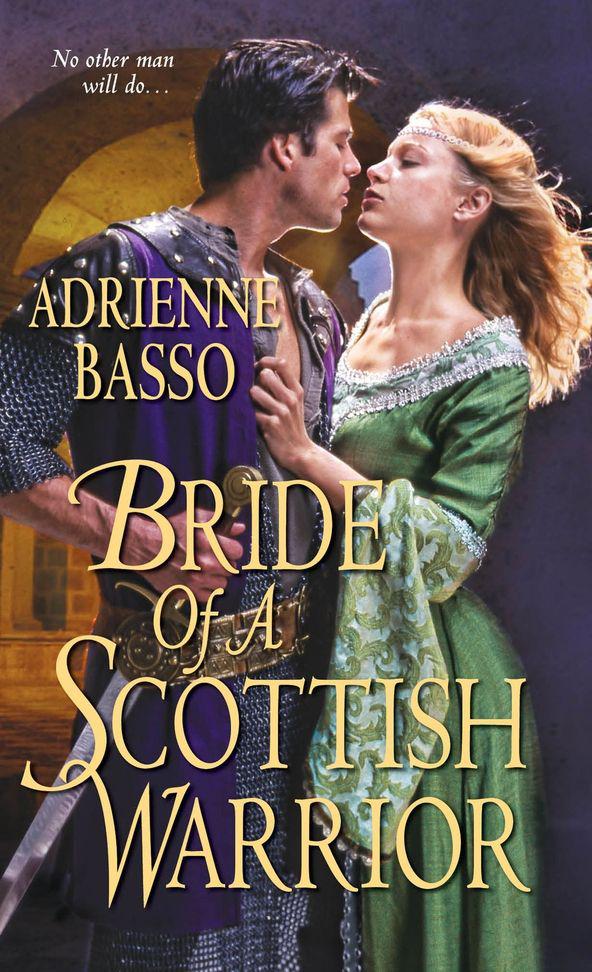 KISS OF A SCOTTISH WARRIOR

“Dinnae press me, Ewan; I beg ye. All I can say is that I cannae be a wife to any man.”

“Not even me? I’m different from most others. I want more from my wife than to take complete control of her life. I want a companion, a woman who will share in my joys and burdens, who will advise me when it’s needed. A woman I can honor and cherish.”

He was not foolish enough to speak the words, for he must have known that any woman would be hard-pressed to believe them upon such a short acquaintance. But he was clever enough to know that was what many females craved most of all—to be loved.

“Ye need a wife with a dowry, who has a family that will accept ye. There are many others that will do.”

“Nay, Grace. I only want ye. I cannae promise to be an ideal husband, but I will try to be all that you wish me to be, all that you need.”

“Ye are without question the boldest man in the Highlands, Ewan Gilroy.”

He grinned at her. Grace felt her heart quicken and her throat go dry. She knew he was going to kiss her even before he leaned close and brushed his mouth against hers. And when he did, she forgot to breathe....

TO WED A VISCOUNT

TO PROTECT AN HEIRESS

TO TEMPT A ROGUE

HOW TO ENJOY A SCANDAL

NATURE OF THE BEAST

HOW TO SEDUCE A SINNER

’TIS THE SEASON TO BE SINFUL

A NIGHT TO REMEMBER

HOW TO BE A SCOTTISH MISTRESS

BRIDE OF A SCOTTISH WARRIOR

“I know.” Lady Grace Ferguson tore her gaze away from her maid’s sympathetic eyes and looked down at her husband. Sir Alastair, chief of Clan Ferguson, lay still and quiet beneath a pile of heavy furs, his ashen face lined with pain, for even in sleep the agony did not leave his broken body.

Grace studied him for a few moments, examining the strong line of his jaw, his crooked nose, the heavy dark stubble on his chin and cheeks. Though his wife for nearly seven years, she found his features were unfamiliar, for Sir Alastair had spent most of the days of their marriage away from her, fighting beside Robert the Bruce as that noble man secured the Scottish crown on his head and independence from the English.

“Hot,” he croaked, attempting to push away the pile of furs.

Grace’s heart tightened as she realized he lacked the strength to move them. “Shhh,” she purred, sitting on the edge of the bed. “Let me.”

She pulled back the furs to his waist, then turned to the bowl of water on the table. Dampening the clean cloth she had brought, Grace slowly, gently brushed it over Alastair’s face. As she did so, she could feel the waves of heat radiating from his body.

“He’ll catch a deathly chill if ye keep that up much longer,” Edna admonished.

Grace nearly smiled. He was dying; they both knew it. Yet Edna still worried about him catching a chill. ’Twas testament indeed to how far the uncertainty and madness was spreading among them all.

“I’ll not stop as long as it brings him a small measure of comfort,” Grace insisted, running the cloth over his chest and arms. “God knows he’s had little peace these past few weeks.”

It seemed such a cruel irony that after surviving nearly seven years of warfare, Alastair was going to perish because of a hunting accident. He had been thrown from his horse and attacked by a wild boar while hunting four weeks ago. His leg had been shattered in several places, the bone poking obscenely through the flesh.

Brother John, a monk with renowned healing skills from the Turriff Monastery, had been brought to the keep. Miraculously, the monk had stitched together the worst of the mangled flesh and bound Alastair’s leg, but the fever and infection raging throughout his body would not abate.

“Ye’ve done enough of that fer now, milady. Why dinnae ye put down the cloth and I’ll take this away before anyone sees what ye’ve been doing?” Edna suggested.

Ignoring her maid, Grace continued with her ministrations, admitting they brought her as much, if not more, comfort than Alastair. With this small task, she finally felt as though she was doing
something,
instead of sitting calmly at his bedside, watching him die.

The repetitious movements soon fell into a rhythm, and with that, the words that followed came naturally. Murmuring soothingly, Grace spoke of how he would be better soon. How the fever would break and his strength would return. Again and again, she dipped the cloth in the water, squeezing it dry, then wiping it over his head, shoulders, chest, and arms, all the while encouraging him to believe the impossible.

He squinted at her, his features drawn tightly in confusion. “Drink.”

Grace motioned to Edna. The maid frowned again, but refrained from reminding her mistress that Brother John had forbidden his patient any liquids until the sun set. Instead, the maid poured a small amount of ale into a goblet and handed it to Grace.

She shifted so she could support Alastair’s shoulders, then held the vessel to his mouth. He sipped slowly. When he was done, Grace laid him gently back on the mattress and once again covered him with the furs. His eyes fluttered closed.

Slowly, as not to jostle him, Grace stood. “Fetch me a chair, Edna.”

The maid clucked her tongue. “Ever since the men carried him home on a litter, ye’ve spent nearly every waking minute and half the night in this sickroom. Why dinnae ye go to yer chamber and lay down? I promise ye’ll be summoned at once if there’s any change in Sir Alastair’s condition.”

“Then go outside and take a walk in the sunshine to stretch yer muscles. ’Tis cold, but the wind is quiet and the fresh air will do ye a world of good.”

For a moment Grace was tempted to comply. The days were growing shorter and colder. Soon the icy winds and snow-covered ground would make spending any time outdoors a misery. She glanced down at Alastair, running her hand over his flushed cheeks, and sighed.

Escaping from the suffocating air of gloom in the chamber sounded heavenly, yet she could not abandon her wifely duties. “Nay, Edna, I shall stay by my husband’s side.”

The maid shrugged with acceptance, then pulled over the requested chair. Grace had just settled herself in it when the chamber door opened.

“Good day, Lady Grace.” Brother John glanced around the chamber, his brow drawing into a heavy frown when he spied the bowl of water, damp cloth, and goblet. “Have you been ignoring my orders again?” he asked, huffing with a superior air of indignity. “I have told ye repeatedly that ye must follow my instructions precisely if ye wish Sir Alastair to recover.”

Grace clenched the edge of the fur blanket. “I’m only trying to ease his pain.”

Muttering beneath his breath, Brother John hurried to his patient’s side. Grace forced herself to rise from the chair, so the monk could attend Alastair’s leg, which was braced between two long planks of wood and covered in long strips of linen. As Brother John carefully snipped away at the linen, the putrid smell of rotting flesh filled the room.

Grace’s stomach heaved. Holding her hand over her nose, she glanced down at the bed. Alastair’s entire leg was gray in color, tinged with streaks of bright red surrounding several gaping wounds. She took a step back, almost knocking over the chair.

“Dinnae let the odor distress ye, Lady Grace,” Brother John said. “ ’Tis not obvious to the untrained eye, yet I can see there’s been improvement.” The monk managed a very slight grin, his thin lips parting to expose long, yellow teeth and a smile so condescending it was clear he thought her a simpleton.

Keeping her composure, Grace answered with a concerned frown. “His fever rages and he suffers mightily.”

“’Tis God’s will,” Brother John replied. He slapped a foul-smelling poultice over an oozing wound, then started to reapply the dirty bandages.

Alastair let out a loud groan. Grace sprang forward, pushing her way between the monk and her husband. “Fer pity’s sake, why must ye be so rough? Have ye no compassion at all?” Taking the bandages away from Brother John, Grace turned to Edna. “Fetch the clean linen ye washed yesterday. I’ll bind Sir Alastair’s wounds myself.”

“Lady Grace—” There was a note of annoyance in Brother John’s voice.

She turned and faced the monk, her expression set. “I will tend him,” she insisted. Brother John’s face reddened in anger. Grace could hear him grinding his teeth, but she refused to relent. Enough! How long was she to remain silent and complacent, while her husband was forced to suffer? She might not know as much about the mysteries of healing, but she could apply a dressing without causing undue pain.

The City of Ravens by Baker, Richard
Then Summer Came by C. R. Jennings
Devilʼs Brew: The Janna Chronicles 5 by Felicity Pulman
Feeling This by Allen, Heather
By Arrangement by Madeline Hunter
No True Glory by Bing West
Devil's Bride by Stephanie Laurens
Conspiracy by Stephen Coonts
Watch Over Me by Christa Parrish
The Russian Seduction by Nikki Navarre