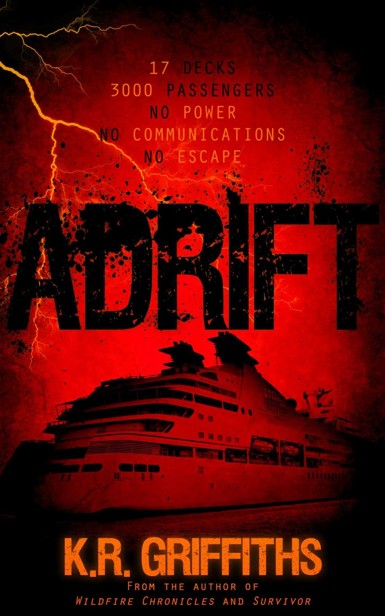 If Jenna Hess had any time to think, she might have idly wondered when she had last been forced to run for anything.

The answer might have been a bus; yeah, probably a bus, though as she had settled into her role at the office and realised that the bored, married men who shared the tedious space with her weren't going to complain about intermittent tardiness, even missed buses hadn't prompted Jenna to break into anything more strenuous than a
trot
in years. Hell, running was for kids; something you left behind at school, like acne.

She was running now, though.

Jenna burst through the doorway into the dark, wet alley at full tilt and heard a burbling sort of shriek pouring from her mouth. With each pace, the fearsome noise rose in pitch.

If she'd had any time to wonder about
that
, Jenna might have concluded that she couldn't
ever
remember screaming. She had let out cries of surprise or fright, of course, while watching horror movies with her off-on boyfriend, or whenever she saw a spider skittering along the floor in her London apartment, but that wasn't screaming.

What Jenna was doing as she ran;
that
was screaming.

The scream was a ragged, painful roar that seemed to have a mind of its own. It tore itself free of her throat, leaving no room for the oxygen that she desperately needed to be heading in the other direction. The scream had to be free; it wasn't a choice she made. Wasn't even a cry for help, really; just an explosion of terrified sound. As if her body had slipped into autopilot, detaching from the processes of her mind somehow.

The scream was an animal noise.

Those were the things that Jenna might have pondered, if she had time.

Instead, her thoughts focused entirely on a solitary word that flickered in her mind like a strobe light. The word was what was left when everything else had been boiled away. When the bullshit that constituted everyday life had been evaporated by the heat of her terror, the word was the residue. The everything.

Beyond the door that had provided her with an escape route from the horror in the building, the alley was unlit, and the stink of it as she bolted into the gloom almost rocked her head back. Writhing around beneath the expected stench of piss and stale alcohol, Jenna's nose detected something else: a dark undercurrent.

Her trembling scream lifted a half-octave.

The alley stretched out to her left and right, and the darkness offered up no indication that taking either direction would be preferable.

Some part of her mind—the part that cowered in the shadows and whimpered while it let animal instinct pilot her burning limbs—registered the fact that she did not recognise her surroundings. That part of Jenna's brain had important information, she thought, but none of it seemed helpful right then. None of it added extra strength to her muscles or allowed her lungs to take in more of the precious oxygen.

None of it made her move faster.

She made it about thirty yards before she felt broken glass beneath her bare left foot, and her mind had a fraction of a second to warn her what was coming.

The right foot dropped before she was able to decipher what was happening, and then crippling pain lanced through Jenna's feet, and the trembling shriek became a guttural roar. Jenna went down hard, crunching into the corner of something that felt like a dumpster and slamming her temple into the ground. When her right shoulder popped with a muted crack that she heard rather than felt, the dreadful noise knocked something loose in her mind.

For a moment, as she came to rest on the unforgiving ground, the world seemed to draw in a deep, shuddering breath, and the crack of her bones ricocheted around the alley. A sound like wet wood popping on an open fire.

Such a permanent sound
, Jenna thought blearily as the huge, dark shape of the dumpster began to swim in her vision. Something about the snapping of her bones seemed to underline a certainty that welled inside her. A terrible finality.

I'm not going to survive this.

Jenna felt dumbly surprised. Even when she had awoken to find herself naked and locked in a dark, unfamiliar room, some part of her had assumed that she would not actually
die
. How the fuck could that happen? How was it possible that one moment you're sitting at a bar exchanging slurred banter with a man who definitely has
potential
and wondering if you had already missed the last train back to London, and the next you're getting ready to die? That sort of thing just didn't happen anywhere other than on television.

It had to be a nightmare. Some sort of psychosis. A mental break.

Even when the door to her surely-not-real cell had opened, and the strange man had dragged her, screaming and struggling vainly to break his iron grip on her hair, to the other room; the one that held something terrible behind a grimy black door, Jenna hadn't believed that she could actually
die
.

She believed it now.

Lying on the slick alley floor, feeling shards of glass pushing almost apologetically into her flesh, it was all too obvious that the pain was real. And if the pain was real, everything else had to be, too.

The pain was receding, though, fading away to nothing, and that realisation made something inside Jenna shriek in horror.

Somewhere in the sickly darkness, she heard a door opening; heard footsteps approaching at a methodical, even pace, and she turned her head feebly toward the sound. Her lips were moving, and sound was emerging, but the words that formed in Jenna's mind—all the emphatic pleas; all the begging and cajoling—were just deformed slurs when they fell from her mouth.

A man's voice. He sounded regretful rather than angry or pained, and hearing the detached neutrality of his tone, Jenna wanted more than anything to scream
fuck you
. Couldn't.

"I told you it would be worse if you struggled," the man said.

Jenna tried to focus on the man, and realised that her sight had changed somehow. In the left eye, where the corner of the dumpster had connected like an angry heavyweight, there was now just impenetrable darkness. With an effort, she raised her right eye and dimly made out a figure standing over her in the gathering darkness. This, presumably, was the man that she had bitten; the one that had released his grip on her hair when she ripped a lump of meat from the soft flesh around his thumb.

The one that she had been drinking with only a couple of hours earlier, wondering how a man so attractive could possibly be single.

The bite had given her an opportunity to run, and Jenna had taken it, and for a while there, she had thought it was all going to work out.

She felt strong hands clamping around her ankles, and suddenly her legs were in the air and the dark world was moving, scraping past her vision slowly.

A swell of nausea that sloshed messily around her mind anaesthetised the agony she knew she should be feeling as her body was dragged across the broken glass. There wasn't any pain, just pressure: like feeling a dentist's drill eating its way into enamel. Jenna prayed for unconsciousness, clawed for it mentally, but the darkness denied her entry.

The man dragging Jenna toward her death had been right.

She had struggled, and it was worse.

Images flashed across her mind, diseased and wet. Memories of something only half-seen in the gloomy room beyond the terrible black door; something that panted eagerly and stank of rotting meat and incalculable age, and Jenna's mind finally snapped.

When the man dragged her to the black door and threw it open once more, fully this time, so she could clearly see the horror that awaited her, Jenna's bowels and bladder evacuated themselves. She didn't even notice.

Unconsciousness would have been great, but Jenna's last thought as her psyche dissolved gratefully into a seething pit of destructive chaos was that insanity wasn't such a bad alternative to oblivion. Not so bad at all.

When Jenna Hess died, she did so slowly, in dreadful increments, chewed apart almost thoughtfully in the stinking dark by a foul presence that even her all-consuming madness shrank away from. She was entirely unaware of her fingers pulling a shard of glass from her thigh and using it to cut away chunks of her own flesh, knowing only that she needed to pass the meat to the creature.

That it wanted the meat.

It took the thing almost twenty minutes to finally demand to eat a part of Jenna that was vital enough to end the torment, and she reached into her ruined, weeping gut and tore out something that popped and sent her spinning, at last, into the welcoming darkness.

Jenna had giggled and screamed the entire time.

It had cost him a large chunk of his thumb, but the man thought that if he got away from Brighton having lost only that, he could call the night a success.

The man glanced at the creature from the corner of his eyes, trying not to stare at it directly, and looked away quickly. He remained in the doorway, separated from the abomination by the ruined corpse of the woman.

He hadn't been able to watch as she ripped the flesh from her legs and torso and passed the dripping pieces of herself to the creature, and he found he couldn't look at the smeared, oozing result that remained on the floor either. He kept his gaze on the wall, staring straight through it and doing his best not to see
anything
.

"We have your message, and now you've had your payment," the man said flatly. "Tell your...brothers that it shall be done. They will be summoned when it is prepared."

His voice faltered a little at the last; the creature had growled murky displeasure at the word
summoned
. The noise it made seemed to ripple through the air, tainting it. Making it toxic.

The man didn't wait for a reply. He turned and strode away quickly, but not too fast; determined not to show weakness. The thing beyond the black door had a code of conduct to stick to, but the man suspected that if he appeared weak and afraid, the creature may not be able to resist the gravitational pull of its twisted nature.

When the black door had closed behind him, and he was standing out in the dark alley once more, the man sucked in a huge lungful of air and vomited so violently that the muscles in his torso would ache for almost a week.

SinfullyYours by Lisa Fox
Keep Calm and Kill Your Wife by Lucky Stevens
Parnassus on Wheels by Christopher Morley
Not Your Ordinary Wolf Girl by Emily Pohl-Weary
Werewolf Dreams by Katie Lee O'Guinn
Croc and the Fox by Eve Langlais
12.Deadly.Little.Secrets.2012 by Casey, Kathryn
Party for Three by Missy Lyons
Defiant Brides by Nancy Rubin Stuart
The Paper Mirror by Dorien Grey