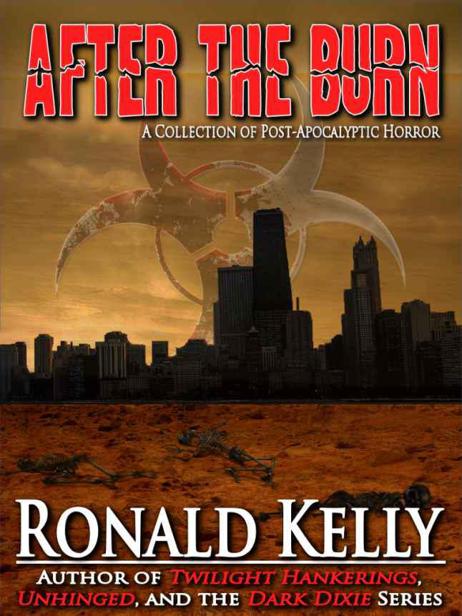 This collection was originally published by Thunderstorm Books in May 2011 as Volume #8 of the Black Voltage series.

This is a work of fiction. Names, characters, places, and incidents are products of the author's imagination or are used fictitiously and are not to be construed as real. Any resemblance to actual events, locales, organizations, or persons, living or dead, is entirely coincidental. Due to mature themes presented within, reader discretion is advised.

All rights reserved. No part of this book may be used or reproduced in any manner whatsoever without written permission except in the case of brief quotations embodied in critical articles and reviews).

A Shiny Can of
Whup
-Ass
to Robert R.
McCammon

A cup of
Swan Song,
a dash of
Boy's Life
, and a heaping helping

of Southern-fried inspiration. Thanks for teaching me through example.

Meat is Life
to Fran
Friel

Who else could it be, darling? Sorry for the outcome, though.

The Happiest Place in Hell
to Hunter
Goatley

What will happen to our favorite vacation spot after the end of the world?

Wouldn't it be great to have a champion like Popsicle Man when we need him most?

Who would John the Balladeer battle after a nuclear holocaust?

His beloved mountains, the folks who dwelt there, or, perhaps, even his own traitorous flesh, if it came down to it?

What if Elvis
didn't
end up in an East Texas nursing home?

Let's tell that ol' tale just one more time, shall we?

The Paradise Pill
to Reilly,
Makenna
, and Ryan Kelly

Remember, in our darkest hour, when all seems lost,

we possess the true key to Paradise.

A SHINY CAN OF WHUP-ASS

THE HAPPIEST PLACE IN HELL

I was once an armchair survivalist.

That phase of my life – and there have been many – occurred when I was in my early twenties; back when my love for art and literature seemed odd and awkward amid boisterous, bullshitting
badasses
whose main focus in life was football, hunting, and four-wheeling. To compensate for my lack of testosterone-fueled machismo, I grew interested in
survivalism
. This was the early to mid-eighties, you understand, when the Cold War was still alive – though gasping its final breath – and Ronald Reagan demanded that Mr. Gorbachev "tear down this wall!" The threat of a nuclear war was still a possibility. It was still very real and palpable in people's minds.

Most folks figured there was nothing they could do about it, putting things like paying the bills and buying Pampers for the baby ahead of nuclear annihilation on their long list of worries. Others – a small and near-fanatical brotherhood – saw the possibility of man-made Armageddon as a challenge and a hobby. They stockpiled food and water, visited the Army surplus stores regularly, and oiled and polished their cold, blue steel. Then they stuck their provisions and their paranoia in their trusty bomb shelter – or their root cellar, if no bunker was handy – and waited for the Four Horsemen of the Apocalypse to gallop in on waves of atomic fire and brimstone.

I was one of those latter folks back during that time, but not in such an extreme and overzealous way. I had a few guns and, on the weekends, you could find me way out in the sticks, shooting some serious black powder, sighting in my
Ruger
Mini-14, or trying out hot-loads in my .357 Magnum. I subscribed to magazines like
Guns & Ammo
and
Soldier of Fortune
. My bookshelves held survivalist classics like
Life After Doomsday, The Anarchist's Cookbook,
and
The Poor Man's James Bond.
Some of these manuals were pretty brutal, with recipes for deadly poisons, bombs, and booby traps; nothing I would have actually used, but it was sort of comforting to know that I could have made them, if necessary. I had combat knives, ninja stars, and
nunchucks
(which you could easily bust your balls with, if you weren't mighty careful!). I had maps of where the bombs would hit, with blast and radiation saturation zones. The only things I didn't have was the food and water stockpiled in a hidden shelter somewhere. I was still living with my parents at the time and I knew Mama always had the pantry well-stocked. If the Emergency Broadcast System came on the radio and it
wasn't
one of those annoying tests, I'd pile my guns and a supply of canned preserves and Beanie Weenies in the trunk of my Firebird and hit the road like Mel Gibson in
The Road Warrior.

Yes, short-sighted and naïve to be sure, but like I said… I was an
armchair
survivalist, not an honest-to-goodness, camouflage-wearing, suspicious-of-everyone-including-their-feeble-old-grandmother commando with a sniper rifle and an Uzi they had bought, piece by piece, through mail-order. Being young like I was – single with no real ties to keep me rooted in one spot – fantasizing about a nuclear-decimated world was, well,
glamorous
.

It was sort of fun planning elaborate strategies dealing with defense and survival in the most dire of circumstances.

Then I grew up, got married, and had kids.

Now the thought of facing such a man-instigated disaster is no longer fun… it's utterly horrifying. Radiation poisoning, gangrened gunshot wounds, and scavenging for scraps of rotten food is definitely not my idea of a good time. The possibility of a nuclear war is not as prominent as it once was, but it's still out there. Terrorists, unstable third-world countries, and even folks who harbor a grudge against society in general… all could potentially set such a scenario in motion. The internet is a wonderful thing; the fabled Information Highway. But like every highway, it has its share of potholes and hairpin curves. There are at least a half dozen sites you can access giving detailed blueprints for the construction of a nuclear device. And that's a scary thought.

The Bible claims that the meek shall inherit the earth. I figure, if worse came to worse, it would be the evil and sadistic who would take possession.

It wouldn't be neighbor versus neighbor like most books and movies depict. More than likely it would be serial killers, rapists, drug dealers, child molesters, and the criminally insane. The moral boundaries of today's society (which are growing less defined by the moment) would be history and they would all come out of the woodwork, ready to take advantage of the situation.

Being a man of faith, I can't help but wonder what role the Almighty would play in such a scenario. Would He raise His mighty hand and smite the infidels… or would He sit back and allow our version of Sodom and Gomorrah to work itself out on its own?

Over the past fifty years or so, post-apocalyptic fiction has involved Biblical prophecy (
Left Behind)
, disease (
The Stand, I Am Legend)
, and zombies (
The Rising, City of the Dead).
I thought it would be fun to return to those fears of yesteryear and explore what sort of chaos and calamity the Big Bomb would dish out.
After the Burn
is my take on how events would develop in such a grim situation, especially in my homeland of the South. I've had this collection of post-apocalyptic horror tales in mind for a long time; about twenty years, in fact, when my story
Flesh Welder
was first published. (Incidentally,
Flesh Welder
is included within because it seemed appropriate.) Recently I sat down and, like in the old days, considered the darkness and degradation that a nuclear dawn might promise. Here's what I came up with; a few tales of horror, humor, hope, and humility in the face of the blackest days imaginable.

Now it's
your
turn
to be the armchair survivalist. So put up your feet, break out the bottled water and freeze-dried rations, and wait for the flash and thunder…

A SHINY CAN OF WHUP-ASS

It was a picture-perfect Fourth of July.

Sam Wheeler opened his fix-it shop as he did every morning at six o'clock, rain or shine, holiday or no holiday. Not that he got much business. Today's throw-away society had made his skills as a handyman dismally obsolete. It was cheaper to simply go out and buy a new radio or phone or television than it was to have someone repair the thing. Besides, a lot of these new-fangled, high definition, laser-driven gadgets were far beyond Sam's expertise. If it didn't have tubes or a rotary dial, the old man pretty much passed on even trying to figure it out.

Sam's Fix-It Shop only remained open in the rural town of Watkins Glen, Alabama for one reason and one reason only – because it was an extension of Sam Wheeler himself. Like an arm or a leg, or an ugly birthmark you couldn't erase. Sam had been up to his elbows in repair jobs when he opened the shop in '46. Back then he'd been a twenty-year-old soldier with a new wife, a house financed on the G.I. bill, and a chance for a successful business. Now, at eighty-four, all he had left was his fluctuating health, a rat-hole of a shop full of dusty junk, and a marble stone in the Baxter County Graveyard with his name chiseled on one end, while on the opposite end was another, complete with a somber date of passage.

Sam – a long, lanky old man with eyeglasses and a shock of snow-white hair, forever decked out in a long-sleeved blue chambray shirt and bibbed overalls – opened the shop from the inside. He lived there now, instead of in the house on Marigold Lane. Stretching, Sam sauntered outside to take his place in his favorite rocking chair. He groaned as he sat down and something in his hip popped, but he merely grimaced and paid it no mind. The rocker next to him was empty. It had been for eight years now. He also paid it no mind… although some days he found it hard to do so.

Wings of Arian by Devri Walls
The Ghost at the Point by Charlotte Calder
Operation Caribe by Mack Maloney
Like Never Before by Melissa Tagg
Modern Sorcery: A Jonathan Shade Novel by Gary Jonas
Vintage Pride by Eilzabeth Lapthorne
Continent for the Taking: The Tragedy and Hope of Africa by Howard W. French
Marilyn Monroe by Barbara Leaming
When She Was Bad: A Thriller by Jonathan Nasaw
Rise From the Ashes: Lena's Story by Laura Franklin