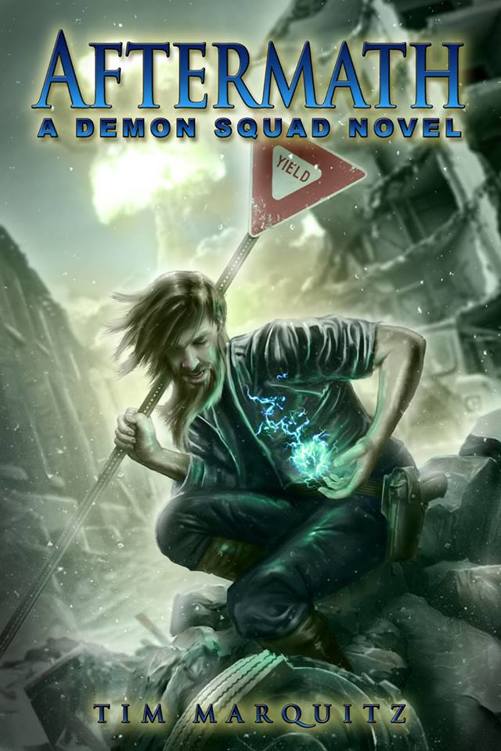 Created in the United States of America

All rights reserved. No part of this book may be reproduced, scanned, or distributed in any form, including digital, electronic, or mechanical, to include photocopying, recording, or by any information storage and retrieval system, without the prior written consent of the author, except for brief quotes used in reviews.

This book is a work of fiction. All characters, names, places, and incidents are products of the author’s imagination or are used fictitiously. Any resemblance to any actual persons, living or dead, events or locales, is entirely coincidental.

Betrayal (Intro short to At the Gates)

DS4 - Echoes of the Past

DS5 - Beyond the Veil

DS6 - The Best of Enemies

To Hell and Back - A Demon Squad Collection (books 1-3)

Embers of an Age

Heir to the Blood Throne: Inheritance

Tales of Magic and Misery

In the Shadow of the Towers (Night Shade)

That Hoodoo Voodoo, That You Do (Ragnarok Publications)

Subscribe to my newsletter
and get up to date information on new releases!

"Trigg isn't just a breath of fresh air, he is a damn hurricane, and he certainly swept me off my feet. It didn't take long for him to become my favorite underdog ever, despite all his flaws."
–Maja at the Nocturnal Library

"Inevitably, I end up comparing this series to the Dresden Files and it really does make sense. Both are first person, both have a down-on-his-luck protagonist who's always the worse for wear in pretty much any situation and both tend to be humorous. But, for my money, the Demon Squad series beats the Dresden Files any day."
–Bryce at Only the Best Sci-fi and Fantasy

"We need more books like this one, bringing a fresh voice to the urban fantasy genre…”
–Bastard at Bastard Books and Other Crap

"I can't imagine getting tired of this series, because the stories are smart and the characters completely addictive. This entire series has become a keeper for me, and I can't wait to see what kind of trouble Frank lands in next."
–Bobby at BookWenches

"Half anti-hero, half asshole, Frank is simply a great character to have tell a story."
–Gef Fox at Wag the Fox

This book is dedicated to the memory of Big Fat Cat, our beloved Rogue. You are missed.

It really sucks to be me.

Not like that’s a surprise to anyone, but some days are way worse than others. Take today for example.

“Give me another one, Calhoun.” I set the empty bottle down with a sullen
thump
and slid it to the edge of the bar. It teetered there, threatening to jump. It should be so lucky.

The old boy behind the counter didn’t bat an eye as he popped the top on a brand new bottle of Everclear and slapped it into my hand. I’m sure it helped that he could pay his mortgage twice over off this week’s tab alone. That kind of scratch buys patience in even the most ill-equipped of folks.

“You got it, Frank.” Calhoun grabbed the corpse of the last bottle and tossed it in the trash before it could succumb to gravity and fall. The guy was getting good at keeping up with me. Too bad the liquor didn’t follow suit.

I lifted the new bottle and chugged down a third of it before coming up for air. The liquor burned my throat and settled heavy in my gut, but that was about all it did besides put another dent in my bank account. Good thing inheriting Hell made me a gazillionaire or I’d be lapping at piss puddles in the back alley in search of a high.

That charming image aside, being a demon actually has its up sides. I’m stronger than most folks, quicker, smarter—well, the jury’s still out on that last one; hung, no doubt—and I heal real fast. Pretty damn useful traits…most of the time. That last bit is kind of a mixed blessing right now. Don’t get me wrong, I love being able to recover from a gunshot wound in a couple hours, and I never have to worry about casts as broken bones don’t take much longer than that to mend. All that keeps me from having to sign up for Obamacare, which is most certainly a blessing without any need for disguise. Ask anyone who’s gone that route. Still, there’s a downside to being a demon too.

I can’t get drunk.

And I
so
fucking wanted to.

“Damn, boy. Ain’t never seen anyone put down as much hooch as you and stay functional,” the lieutenant said as he moseyed up to the bar, though that wasn’t his real name. Folks at the Yellow Swamp Saloon called him that because he had a scar in the shape of a rectangle in the center of his forehead. Looked exactly like a lieutenant’s stripe. He was probably glad he didn’t get promoted.

He patted me on the back and plopped down on the stool to my left. “You must hate your liver as much as I hate my ol’ lady’s mother.” The rest of the guys at the bar broke out in raucous laughter. I could tell them a thing or two about mother in laws.

I swallowed another couple mouthfuls but kept my thoughts on that particular subject to a nod. I doubted any of them had helped to kill theirs. “We have our differences of opinion lately, that’s for sure.” The whole keeping me conscious bit mostly.

That’s where the heroin came in.

A couple uncut syringes of horse plugged into my veins alongside the gallons of booze helped to bring oblivion a step or two closer. Though I wasn’t so much as riding the dragon as I was straddling a one-winged dragonfly, it took the edge off enough to keep me from falling on Longinus’s sword at the end of the day. That’s winning, right?

What kind of father would I be to Abigail if I went and offed myself?

That dragged a hearty chortle out of me given my current circumstances. There I was shooting up enough smack to keep the war on drugs funded for the next decade and I was worried about what kind of Dad I would be to the same kid I’d dropped off with Scarlett not three days after I’d gutted Trinity. Hypocrisy, thy name is Frank.

That earned another chuckle.

The old boys at the bar just smiled and went about their business as if I hadn’t just burst out laughing randomly. They’d gotten used to my brand of craziness. For the last five months I’d been drowning my sorrows alongside them in whatever Bumfuck Louisiana shantytown I’d landed in. Pitkin I think it was, if I remembered the sign on the side of the highway. Population 600, give or take a few split personalities. I fit right in.

“How many bottles you going for today?” Jerry asked. “It was thirty yesterday.”

Good thing somebody was keeping track of my delinquency. Wasn’t like I was. Forgetting everything was the reason I was doing it in the first place. “Let’s shoot for thirty-five then.”

Calhoun grunted. “Good thing the Liquor Depot delivered this morning. I was thinking I’d have to pour some rubbing alcohol in a bucket in order to keep up with you.”

“That’s an option?” I was only half kidding. It couldn’t taste much worse than the Everclear.

Before he could give me an answer the door to the bar flew open, crashing into the wall with a resonating
boom
. A rustic beer sign fell from the wall and crashed to the floor. The clatter cut through the room, silencing the place. The only sound was Buford’s huffing as he struggled to catch his breath.

Buford was a regular at the Swamp and he gave better than he got when it came to his whiskey. Every night after his shift at the garage down the block he came in like clockwork, smelling of grease and well-earned sweat and took his usual seat at the bar. He was a fixture there, and I’d gotten to know his mannerisms pretty well drinking beside him every night. The guy made gargoyles look chatty. He had two expressions: stoic and sober and stoic and drunk. Neither of those were what the ex-Marine was wearing right then. There was a wildness to his eyes that pierced the haze of dope and drink and brought me to my feet. For all his composure, forever a soldier, I saw fear there.

“What the hell, Bu?” Calhoun asked, gesturing to the sign as it clattered to a stop. “My pappy’s pappy gave me that.”

Buford didn’t even acknowledge the bartender. “Git to your storm shelters! Now!” He huffed his way out the door before his gruff voice had even stopped reverberating from the rafters.

“What the hell is that fool on about?” The lieutenant must have seen the same thing in Buford I had and the old boy looked ready to heave. To his credit he hopped up and started for the door without hesitation. Pretty much everyone else sober enough to walk followed him out, lemmings in a line headed for the cliff. That included me, much as I knew I would regret it.

Maybe I’m just a pessimist but nothing good ever starts with someone crashing through a door unless there’s nudity or a big old jug of Kool-Aid involved.

The uncomfortable stillness of the bar was amplified outside, the trees drooping under the oppressive humidity. Nothing moved beyond the door to the Swamp, no cars or people or any of the wild critters that made the streets their home. Even the birds and insects appeared to have drawn a breath at the exact same time, each holding it in anticipation of something I didn’t want to know about. The town was as silent as I’d ever heard it.

Buford stood in the middle of the road with his ever-present baseball cap crumpled in his meaty hand. The top of his balding scalp gleamed in the hazy sunlight. Frozen in place he looked like he’d just been propositioned by Medusa. He stared out over the Piggly Wiggly roof at something none of us could see, our view blocked by the overgrown trees that ringed the Swamp’s parking lot.

The lieutenant was the first to reach Buford. He stumbled to a halt alongside the mechanic and went rigid as though Buford’s paralysis was contagious. Both of them stared into the distance, mouths moving but no words slipping free of their lips. I dragged my feet to avoid the inevitable calamity awaiting me and joined them a few seconds later, following their gazes like a good little sheep. Of course I wished I hadn’t.

There, not more than a couple miles outside of town, a mushroom cloud crept into the sky.

A volatile storm of red and orange battled in the dimming blue above, billowing upward where it cast a sickly pallor over those assembled in the street. Then came the
boom
. The ground trembled and danced under our feet, knocking a few of the less stable bar patrons down. No one bothered to help them up as realization settled over. There would be no escape from what was coming.