Read All He Wants Online 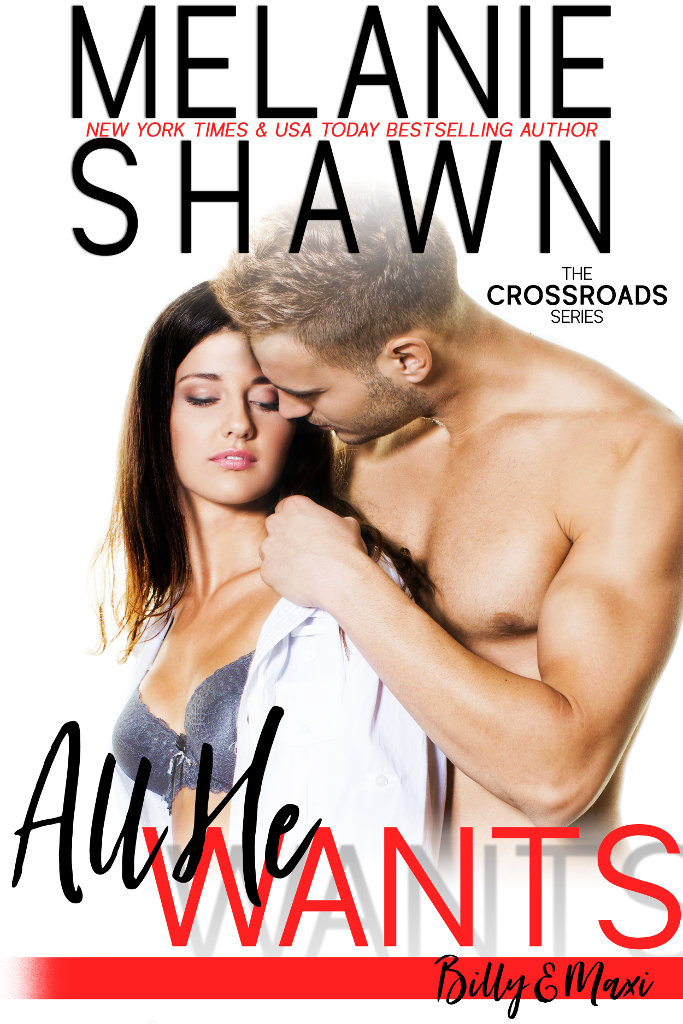 All rights reserved. This copy is intended for the original purchaser of this book. No part of this may be used or reproduced in any manner whatsoever without permission in writing from Melanie Shawn. Exceptions are limited to reviewers who may use brief quotations in connection with reviews. No part of this book can be transmitted, scanned, reproduced, or distributed in any written or electronic form without written permission from Melanie Shawn.

This book is a work of fiction. Places, names, characters and events are either products of the author’s imagination or used fictitiously. Any resemblance to actual events, locations, or persons, living or dead, is purely coincidental and not intended by the author.

Disclaimer: The material in this book is for mature audiences only and contains graphic content. It is intended only for those aged 18 and older.

Other Titles by Melanie Shawn

“H
ey, gorgeous! Do you have a mirror in your pocket, ’cause I can see myself in your pants!”

Seriously?! In the history of mankind, have catcalls ever worked?

Maxine Rizzo kept her gaze straight ahead as her feet pounded in a punishing rhythm on the asphalt beneath her. Sweat dripped down the back of her neck and the muscles in her thighs screamed in protest as she ran past the dozen or so workers that were congregating to begin their day on one of the largest infrastructures she’d ever seen. It ran the entire length of the city block. She purposefully kept her facial expression blank so that they would see no acknowledgement of the shouts and whistles.

“Let me get that number, sexy!” Loud kissing noises followed the request from another Casanova-in-the-making.

Note to self: Adjust run to start fifteen minutes earlier.

The real trick to perfecting her timing was to leave when it was light enough to be reasonably safe, but still finish her five miles before the workers started arriving at the construction site on her route.

She’d be so happy when she could return to her gym and ditch these early morning outdoor runs! Unfortunately, she had no idea when that would be happening. Her world felt like it was slowly unraveling and, no matter how hard she tried to keep the fabric of her life together, it continued shredding into pieces. Every time she thought she had things under control, something would happen to chip away at the carefully constructed walls she’d built around her safe, predictable life.

“You want a workout, I’ll give you a workout, baby!” Out of the corner of her eye, Maxi saw that the man who’d so graciously offered to help with her fitness routine was now thrusting his hips towards her.

Her face remained neutral. From experience she’d learned that if her actions were read as intentionally ignoring these advances, or—
gasp
—being irritated by them, things could easily escalate, far too quickly, into aggressive and scary territory. Words like “baby” suddenly turned into “bitch.”
Compliments
turned to insults. That’s why she wore both earbuds in her ears even though only the right one worked. They were a great prop to sell the idea that she was oblivious to the unwanted attention. With the left speaker silent, she got to listen to music in her right ear to motivate her, but she was still able to hear things around her. All her life she’d been acutely aware of her surroundings, but over the past six weeks, her caution-sensors had been upgraded to maximum-security levels.

“Keepin’ it nice and tight for me!”

As more voices joined in on the “fun,” an all too familiar fear began to spread through her. Just like the men on the scaffolding, she paid zero attention to it. Holding her head high, she kept moving, putting one foot in front of the other, looking straight ahead.

“Look at that ass! I want to wear it as a hat!” That inspired comment garnered cheers and chuckles from the peanut gallery.

Trying to distract herself from the panic that was rising up in her, she shook her head slightly and focused on the fact that these guys really needed to get some fresh material. Over the past two weeks, since she’d been forced to get her cardio in the great outdoors, she’d heard the same come-ons repeatedly. You would think spending hours every day engaged in this behavior would inspire a little originality. It didn’t.

Maxi would love someone to give her even
one
example where coming on to a female by screaming obscene “compliments” her direction had resulted in her responding with anything other than disgust, anger, or fear. Did that behavior breed any happily-ever-after tales? Had true love bloomed from derogatory and demeaning heckling?

A clear picture of an elderly woman holding the wrinkled hand of her husband, as they sat on a porch swing, materialized in Maxi’s head. The couple was surrounded by children eagerly looking up at their grandparents as the grandma leaned down and spoke in a wobbly voice. “I met your granddaddy while I was walking down the street. He yelled to me that he wanted to find out if I looked just as good coming as I did going and I knew he was the one.”

She turned the corner onto the block where she lived and, about halfway down the street, she slowed her pace to a jog to begin her cool down.

At that comical scene, all the terror that had started to swell in her chest evaporated like dry ice hitting air and a smile tugged at her mouth. Thank God for her vivid imagination. That gift had been her surrogate therapist. Whenever life felt like things were closing in on her, she’d escape into her own world. And growing up, it had been her constant companion and entertainment.

At the young age of four, her mom walked out on her and her dad. Being an only child raised by a single father, who worked sixty hours a week, meant her imagination was her source of entertainment.

Not that her dad was absent or that she’d been alone. He wasn’t and she hadn’t. She’d spent her formative years surrounded by people. Men, to be exact. In a gym. A boxing gym. Her dad, the great four-time World Heavyweight Champion Charlie Rizzo, retired from fighting when she was born and transitioned to training fighters. Title-holding, world-championship-winning fighters. And she’d had a front row seat to all the grit and glory. Which had been about as entertaining as watching paint dry to a girl who was more interested in dolls, make-up, and nail polish than uppercuts, knock-outs, and weight classes.

But her interests were inconsequential to a single dad who knew the streets and wanted to keep his only child close and
safe
. Every day after school, she’d go straight to the gym, eat a snack, do her homework, and then get lost imagining herself as a princess in a fairytale waiting for her prince to save her. That would last until around nine o’clock when she and her dad would take the train back to their cozy (aka, tiny) apartment, picking up take-out on the way. They’d eat dinner together in front of the television, and then she’d go to bed.

The next day she’d wake up at the break of dawn and her dad would make her breakfast before he headed to the gym and she went to school. After the last bell rang, her entire Groundhog Day existence would start all over again.

During her countless hours in the gym, her Disney-inspired daydreams transported her to worlds where she would get banished to the forest and her only friends were talking animals. Sometimes a dragon would make a heart-stopping appearance before her knight in shining armor would appear and whisk her away, but not before besting the fire-breathing beast. Then, of course, there were the classics—getting trapped in a dungeon by an evil stepmother and being locked in the high tower of a grand castle by an evil queen. In each scenario she’d be saved by a handsome prince, sometimes in shining armor, sometimes not.

When she was really young, the prince’s face always resembled whoever her celebrity crush was at the time. First, after seeing
Titanic
, it was Leonardo DiCaprio. Leonardo took a back seat however after watching Ryan Phillipe in
Cruel Intentions
. Ryan was short-lived though, as he was quickly replaced by Joshua Jackson from
Dawson’s Creek
. But all that changed one month after her twelfth birthday, when her dad started training a sixteen-year-old street kid named Billy Marshall. Since the day she walked into the gym after school and saw Billy in the ring, her prince had one face and one face only.

To this day, she remembered the feeling that had swept over her pre-teen self when those intense brown eyes landed on her and those full lips turned up in their trademark charming-bad-boy smile. Her world stopped spinning, her head felt like it was going to float away and her heart pounded rapidly in her chest. From that moment on, the role of her “prince” was cast with a two-to-one majority vote. Her head was the only hold out, but against her heart and hormones, it didn’t stand a chance.

Even now, more than ten years later, Billy retained his role as the only man she ever fantasized about. Past, present, and she feared, future. Although now her fantasies tended to be more
adult
in nature and less fairytale inspired. Billy “The Big Bad Wolf” Marshall was more of a cocky womanizer than a knight in shining armor. He wasn’t the happily-ever-after type, and she didn’t believe in fairytales anymore and certainly wasn’t waiting for a prince to “save” her. She thrived on her independence in her professional and personal life. She wanted an equal partner in life, someone who supported her and who she supported.

Her gait slowed to a brisk walk as she approached her building. When she saw her reflection in the glass, her theory was once again proven. What you looked like had nothing to do with why men hit on you. It was about their ego, it was nothing personal. Her long dark hair was pulled up in a ponytail. She had dark circles under her sunken eyes. Her normally olive skin was pale except for her cheeks which were bright red from exertion. Her blue hoodie was baggy and her leggings were just blah. She was a mess.

Another thing she needed to keep at the front of her mind when it came to her prince. He had a way with words and it was easy to fall under the spell of his charms. She’d almost succumbed more times than she’d like to admit. The thing was, his charms were universal. He loved women. All women. Nothing personal.

“Morning, Miss Rizzo.” Carter, the new, teenage doorman held the glass door open for her when he saw her standing outside. “How was your run?”

It still seemed surreal that she lived in a place like this. Lake Towers was a fifteen-story architectural masterpiece. Not even in her wildest dreams could she have ever imagined that she would someday live in such an upscale condo, complete with a twenty-four-hour concierge, valet, and doorman.