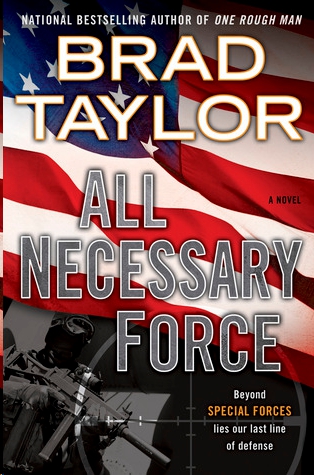 Published by Dutton, a member of Penguin Group (USA) Inc.

All necessary force : a Pike Logan thriller / by Brad Taylor.

This book is a work of fiction. Names, characters, places, and incidents either are the product of the author’s imagination or are used fictitiously, and any resemblance to actual persons, living or dead, business establishments, events, or locales is entirely coincidental.

That the President is authorized to use all necessary and appropriate force against those nations, organizations, or persons he determines planned, authorized, committed, or aided the terrorist attacks that occurred on September 11, 2001…

Whoever fights monsters should see to it that in the process he does not become a monster. And when you look long into an abyss, the abyss also looks into you.

lithering the last fifty meters on his belly, Staff Sergeant Chris Hale reached the edge of the depression where the engine noise was coming from. Slowly parting the jungle growth to his front, he had his first clear view of the hollow. The sight caused his gut to clench.

Milling around as if they were about to start a parade were at least fifty North Vietnamese Army regular soldiers. Behind them was an elaborately camouflaged structure that looked like a large lanai that Hale had seen on his R&R to Hawaii, complete with wicker chairs and a ceiling fan lazily turning. Which explained the noise. There was a generator somewhere close by.

Hale continued to scan, peering intently at another intricately camouflaged structure about a hundred meters away. Trying to stitch together what he was seeing, like a jigsaw puzzle with missing pieces, he realized it wasn’t a building, but a helicopter. A Soviet Mi-4. He couldn’t believe it. What’s more, he knew nobody at MACV-SOG headquarters in Danang would believe it. He inched up his camera, hoping the lens was good enough to make out the chopper from this distance.

After a couple of snaps, he turned back to the lanai, now full of NVA officers.
The mother lode,
he thought. Looking closer, he saw they weren’t NVA, but something else. They were taller than Vietnamese, and
wore a different uniform.
Shit, they’re Chinese
. He watched them all turn at the same time and look toward the rear of the room, where another man entered dressed in civilian clothes. With a start, Hale saw he was a Caucasian.
A fucking Russian. No way will the FOB buy this.
He’d heard many strange tales about what recon teams had seen across the fence inside Cambodia or Laos, including Chevy station wagons with Texas plates or Soviet armor, but this compound was taking the cake.

The Caucasian walked to the edge of the lanai and stood with his hands on his hips, surveying the activity before him in the hollow. Hale snapped as many pictures of him as he could, no more than thirty meters away. When the man returned to the group, Hale continued to photograph, fired up with the thought of providing evidence of both Chinese and Russian advisors helping the NVA in supposedly neutral Cambodia. When he figured he’d pushed his luck enough, he slithered backward to Houng, the Montagnard native he’d left pulling security to his rear. After a brief exchange of hand and arm signals, they began creeping back to the Remain Overnight Position, or RON, where the rest of the five-member team waited.

They crept very slowly, covering only ten or fifteen meters before stopping to listen. Such movement required extreme patience, as Hale fought the urge to stretch the fifteen meters into fifty. They had to cover only about a football field, but it took them close to an hour to reach the team.

Moving inside the small security perimeter of the team, Hale signaled his one-one, Sergeant Dickie Thomas. Second in command, Thomas carried the team radio, their only lifeline if anything went wrong.

Thomas crept up and whispered, “What about Cummings?”

Specialist Cummings was the only other American on the team. The remaining four men were Montagnard mercenaries recruited for their fighting prowess and their fierce hatred of the Vietnamese. All belonged to the Ground Studies Branch of the U.S. Military’s Studies and Observation Group, more commonly called SOG. The cover name made it sound like they were a bunch of scientists out taking soil samples to improve the South Vietnamese rice crop. In reality, they were Special
Forces soldiers who’d volunteered for top-secret cross-border reconnaissance missions into the countries neighboring Vietnam to develop intelligence on enemy movements down the Ho Chi Minh Trail.

Specialist Cummings was new to SOG’s Command and Control South—the element responsible for Cambodia—and was accompanying Hale’s team as an orientation before assuming one-one duties of his own on another team. Hale had forgotten he was there. He motioned Cummings over.

Speaking in a whisper, he told the two men what he had found. As expected, they were skeptical, which aggravated him. How was he going to convince the boss at CCS if his own team doubted him?

“I got fucking pictures. I’m telling you, there’s a head-shed meeting going on between the NVA and a bunch of foreign advisors.”

Thomas grabbed Hale’s arm as his voice began to rise.

“Shhh. Jesus, remember where we are?”

Hale abruptly became quiet, with the entire team straining to hear anything out of the ordinary in the jungle growth. His team was on day four of a five-day mission, and the strain of working alone deep inside enemy territory was wearing them down, with last night bringing them to the breaking point.

They had pulled up into the RON just as the sun began to set. After the darkness had descended, a black curtain that was claustrophobic in its intensity, they had noticed fires all around them, winking like fireflies and extending off into the distance. Cooking fires. For a large number of people.

Somehow, they had managed to penetrate inside the perimeter of a large enemy base camp without either them or the enemy realizing it. As the one-zero, or team leader, Hale had made the call to use the RON instead of trying to thread their way back out in the darkness, then thread their way back in during daylight for the recon. The night had been sleepless, but the decision had paid off big-time. All they had to do now was live to talk about it.

Hale whispered, “Let’s get the hell out of here. Before some idiot out to take a shit stumbles over us. We’ve still got a day’s walk before we exfil.”

Thomas grimaced at the thought of walking all the way back to target area Lima 7, but understood why. Lately, it seemed as if the NVA knew the SOG Recon Teams were coming. Even if they managed to insert across the border, the NVA found them within hours, forcing a running gun battle for survival. Several teams had vanished without a trace, the last contact by radio simply saying they were okay, then nothing. The rumor going around was that there was a mole somewhere within higher headquarters. A plant that was feeding information to the enemy.