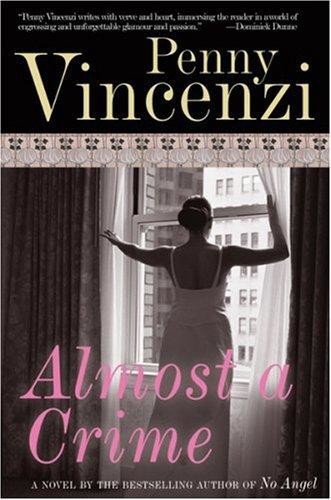 Tom and Octavia Fleming have the perfect power marriage: he

industry. They are attractive, rich, successful … Then Octavia

the affair itself have consequences that are potentially fatal both

to the marriage and its power. For this is no ordinary affair,

but one that leads to terror and danger, threatening other

people, damaging other lives. Nothing and no one in the

charmed circle in which the Flemings move can escape: not their

children, not their friends, not even the one thing that seemed

beyond reach — their own professional success.

‘Another absorbing page-turner, packed with believable

‘Penny Vincenzi writes with such flair and

gusto that I defy any reader, once

they’ve taken the smallest nibble, not to

gobble it all down …Without doubt yet

another megaseller for Vincenzi’ Sunday Express

Penny Vincenzi began her career as a junior

secretary for Vogue and Tatler. She later worked as

Fashion and Beauty Editor on magazines such as Woman’s Own, Nova and Honey, before becoming a contributing editor for Cosmopolitan. She is

Places, The Dilemma and Windfall. Penny Vincenzi is married with four children.

First published in Great Britain by Orion in 1999

This paperback edition published in 2000

The right of Penny Vincenzi to be identified as the author

All rights reserved. No part of this publication may be

reproduced, stored in a retrieval system, or transmitted, in

any form or by any means, electronic, mechanical,

photocopying, recording or otherwise, without the prior

permission of the copyright owner.

A CIP catalogue record for this book

is available from the British Library.

Printed and bound in Australia by

For my family. Almost a dynasty

With lots of love

usual; even more than usual therefore, I owe a great deal to

my teachers, who have been required to be even more

patient and long-suffering than usual. I would like to thank

the following people who gave of their time, expertise and

seemingly bottomless well of knowledge: the roll call in no

I would like to thank Nicola Foulston for allowing me such

full access to Brands Hatch and its environs, and also Tim

Jones of Brands Hatch for his kindness; Henry Talbot for an

absolutely marvellous tour of the House of Commons; Sue

Stapely (yet again) for a specially wide-ranging contribution

and set of contacts, and Georgina and Christopher Bailey

for their hospitality and generosity in Barbados.

I have to thank, as always, Orion for yet more brilliant

publishing, most notably Rosie de Courcy for her editing

which is tactful, patient and inspired in equal and equally

Manderson who sells the books with such determination

and skill, Lucie Stericker who made Almost a Crime look

beautiful, Susan Lamb for her own particular brand of clearsighted

input and Camilla Stoddart who put the nuts and

bolts in place. Others who should certainly not go

unthanked are Kati Nicholl who worked such a miracle in

cutting out thousands of words from the book without me

ever noticing it, Emma Draude from Midas PR who has

seen that the entire world knows about it, and Trevor

Leighton who took yet another dazzling cover photograph.

And of course Desmond Elliott, my agent, who not only

does all the usual agent-like things, but makes me laugh and

tells me wonderful stories I can incorporate in the books.

And on the home front, I’d like to thank dear Carol

Osborne who so tirelessly sees that the front of the home

does indeed remain orderly, makes the best puddings in the

world and even walks the dogs when the deadlines don’t

permit me to do it.

A large and heartfelt thank you to my four daughters,

Polly, Sophie, Emily and Claudia, so frequently, inescapably and patiently on the receiving end of my wails of panic that the book will never be finished/get published/be read by

anyone at all; and most of all and once again my husband,

Paul, who continues to soothe my anguish, steady my

nerves, even at three in the morning, pour me endless

glasses of Chardonnay when all else fails and most

importantly never proffers advice or opinion until I

absolutely drag them out of him (when both are invariably

of five-star quality). As always, looking back, it was the best

Octavia Fleming, beautiful and talented partner in a

Marianne, his mistress, mother of adolescents Zoe and Romilly.

Michael Carlton, another of Tom’s clients, an

confidante, and her husband Charles.

Gabriel Bingham, a Blair-intake MP with a chip.

Pattie David, a client of Octavia’s, and her daughter Megan.

Lauren Bartlett, a predatory family friend of the

Flemings, and her complacent husband Drew.

The first time Octavia Fleming was asked if she and her

husband would appear in a feature in a glossy magazine

about power marriages she had laughed aloud; of course she

and Tom weren’t powerful, she said, they were just two

rather overworked professional people and what was a

power marriage anyway? It was a marriage, the editor had

said carefully, that was mutually supportive professionally as

well as personally: ‘and, we feel, one of the major

sociological icons of the ‘nineties’. Octavia had said that

neither she nor Tom had any idea they were sociologically

‘Well,’ the editor had said, ‘there you are, you in the

charity business, your husband in public affairs; there must

be so many occasions when your paths cross, when you can

help one another with contacts, or by discussing things

together, by being aware of the same sort of situations. One

of our other interviewees,’ she finished, ‘defined it as a

marriage whose sum was greater than its parts.’

‘You mean the opposite of divide and rule?’ said Octavia,

and the editor said yes, she supposed she did and that would

be a good quote too.

Octavia had said she’d think about and discuss it with

Tom; rather to her surprise he agreed, providing he could

approve the text. He said his consultancy could do with the

publicity; Octavia had supposed that rather proved the editor’s point.

The article about five such marriages as theirs appeared

three months later and was entitled ‘Combine and Rule’.

The feature was illustrated with some rather nice photographs

— Octavia with her intense dark beauty, Tom with

his slightly gaunt elegance, both of them inevitably over

glamorised. That, together with what had then been a new

and rather attractive concept — the power marriage — had

Other articles followed: in glossy magazines or the

and Octavia became used to being recognised in the sort of

places where the chattering classes gathered; people would

smart restaurants and point them out to one another, would

hurry across the room at receptions to claim a greater

acquaintance with them than they actually had. And they

would receive invitations to parties to launch products or

meet people whom they had never heard of or hardly

the right connotations of gloss and glamour to a gathering.

They didn’t mind, rather the reverse (although the quote

from one ‘friend’, that she would practically pay them to

have them at a dinner party, had made Octavia squirm), and

there was no doubt that both their professional lives

What it did for the marriage itself, Octavia was rather less

‘Octavia, I’ve got Tom on the line. He says can you

possibly fit in drinks with him this evening? Six in the

American Bar at the Savoy. He says it won’t take more than

an hour because then he’s got to go on to a dinner. I said I

didn’t think you could, but—’

awesomely efficient secretary, would make a much better

job of being Mrs Tom Fleming. She would never double

book herself, over-extend her energies, spread herself too

thin. If Sarah Jane thought she couldn’t be at the Savoy by

six this evening, then she couldn’t.

‘I don’t think I can either. I’ve got the meeting with a

possible sponsor for Cultivate coming in at four thirty,

Sarah Jane smiled at her approvingly. ‘I’ll tell him. Now

you’d better start winding up for lunch, Octavia. The cab’s

‘Fine. Have you got the notes?’

She reappeared with a thick, rather battered file. ‘Tom’s

rung again. He says if he makes it six thirty could you

‘I should think so. Yes. Yes, I’ll tell him. Now, I’ve put everything in here. Mrs Piper is always impressed by volume.

matter. Oh, by the way, Tom also wants to know when

Gideon’s sports day is. I did tell him, but he’s obviously

And that conversation, thought Octavia, really did sum

up her whole life. And how absurd a life it was, where she

and Tom communicated through their secretaries, tried

(and failed) to make appointments with one another,

struggled to find the time to have a conversation together

about quite ordinary things.

We must have a talk about the holiday, he would say, or

we really should discuss Gideon’s extra coaching, she would