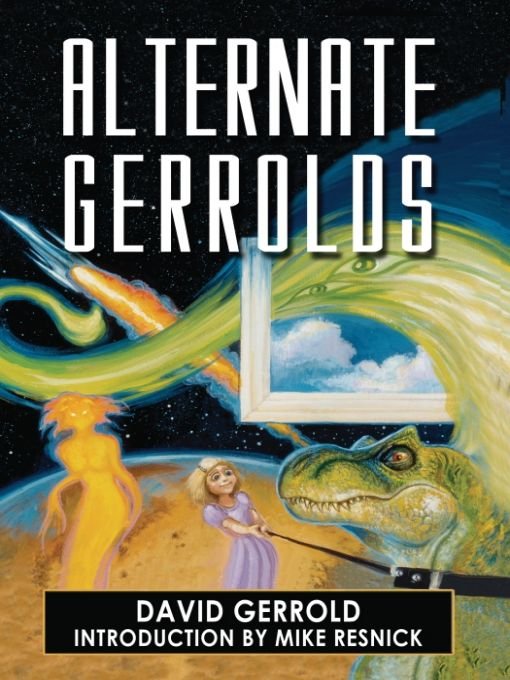 Table of Contents
Praise
ALSO BY DAVID GERROLD
Title Page
Dedication
10 REASONS WHY I HATE DAVID GERROLD
SKIP THIS PART
Bauble
The Impeachment of Adlai Stevenson
The Kennedy Enterprise
The Firebringers
Franz Kafka, Superhero!
Rex
... And Eight Rabid Pigs
The Ghost of Christmas Sideways
A Wish For Smish
What Goes Around
The Fan Who Molded Himself
The Feathered Mastodon
The Seminar From Hell
The Spell
PART ONE:
PART TWO:
PART THREE:
PART FOUR:
EPILOGUE:
AUTHOR’S AFTERWORD:
Digging In Gehenna
Riding Janis
Copyright Page
PRAISE FOR DAVID GERROLD
“Gerrold has a remarkable gift for storytelling.”
—LAMBDA BOOK REPORT
“A first-rate writer”
—LIBRARY JOURNAL
“David Gerrold is one of the most original thinkers and
fluent writers in contemporary science fiction.”
—BEN BOVA
“Whether you like science fiction or not, you will find his
keen intelligence, profound empathy and world-class wit
hard to resist, difficult to put down and impossible to forget.”
—SPIDER ROBINSON, author of
The Crazy Years
ALSO BY DAVID GERROLD
The Man Who Folded Himself
The Martian Child
The Flying Sorcerers*
When H.A.R.L.I.E. Was One
Space Skimmer
Moonstar Odyssey
Deathbeast
Chess With A Dragon
Tales of the Star Wolf Series
Yesterday’s Children
The Voyage of the Star Wolf
The Middle of Nowhere
Blood and Fire
The War Against the Chtorr Series
A Matter For Men
A Day For Damnation
A Rage For Revenge
A Season For Slaughter
The Dingillad Trilogy
Jumping Off the Planet
Bouncing Off the Moon
Leaping To the Stars
*with Larry Niven 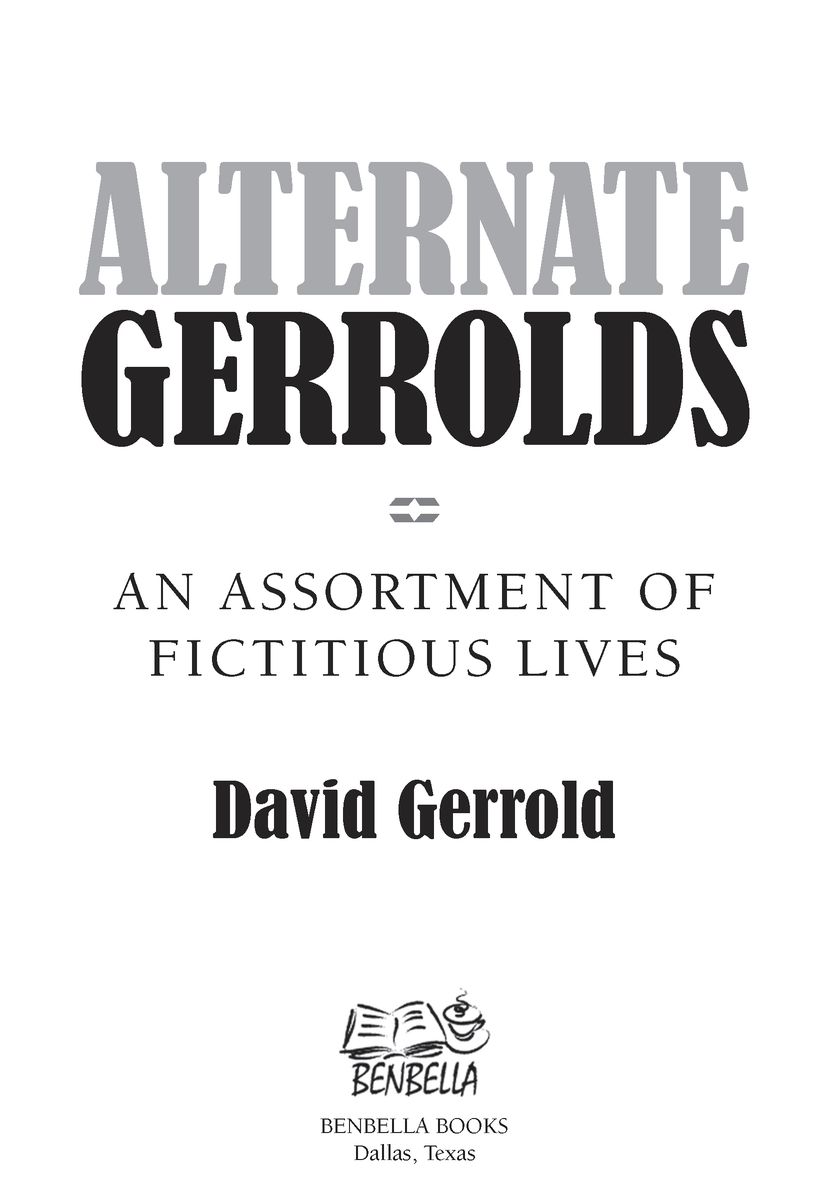 for Mike Resnick,
with gratitude and love

by Mike Resnick
10 REASONS WHY I HATE DAVID GERROLD
1. While still in his early twenties, David wrote “The Trouble with Tribbles,” which was voted the most popular
Star Trek
script of all time. If it wasn’t for David, there would probably be a million less Trekkies in the world. If there is a better reason to lynch him, I can’t think of it.
2. It was David who, with Anne McCaffery, cornered me at the 1969 worldcon in St. Louis and wouldn’t let me go until I joined SFWA. There is no question in my mind that I would have won at least a Pulitzer by now, and probably a Nobel, if I hadn’t spent so much time working on SFWA committees. (David himself dropped his membership in SFWA for almost a decade while turning out one bestseller after another, the swine.)
3. David wrote
When H.A.R.L.I.E. Was One
back in 1971. It really should have won the Hugo, but more to the point, it practically destroyed the field when one inept imitator after another tried to match David’s sure hand dealing with cybernetic self-awareness.
4. David and I judged the 1978 worldcon masquerade in Phoenix, which that summer resembled the anteroom to hell. The only air-conditioned room in the city was the judges’ deliberation room, and David therefore called for three separate run-throughs and eliminations, just so the judges could keep returning to air-conditioned comfort. Of course, I was the one who was blamed for it.
5. David wrote
The Man Who Folded Himself,
a work of sheer brilliance that made all future time paradox novels redundant, just before I sat down to write mine, which would certainly have done the same thing even better.
6. David got the notion of charging a dollar apiece for his autographs at conventions, when the rest of us were doing it for free. Just about the time I was feeling morally superior to him, it was revealed that all the money he collected for those autographs went to charity. You can’t imagine how much I hate it when someone makes me feel like a moral midget. Especially someone like (ugh) David.
7. David began writing the
War Against The Chtorr
series, hitting the bestseller list with each of them. To add insult to injury, he came up with the plan of taking money to put fans into the books and having them die in horrible ways—and, of course, the money went to charity. This made it impossible for entrepreneurs like me to charge fans for killing them in gruesome ways while keeping the money. One more black mark against him.
8. Because I am nothing if not generous and magnanimous, I decided to invite David to write for one of my anthologies. It was to be a one-time thing, just to prove to the world what I nice guy I am. And that blackguard screwed up the works again, by writing such a brilliant and well-received story that I had no choice but to commission thirteen more for my next thirteen anthologies. You’ve no idea of the psychic pain I endure each time a Gerrold story comes in that is too good to reject.
9. David is both thinner and hairier than I am. Neither will ever be forgiven.
10. I am a professional writer. It is the only thing people pay me to do. And yet, just because my anthologies have made David a household name (so is “cockroach,” but let it pass), here I am writing about him for free. The only consolation I take is that he is so universally loathed—except by 20,000 fans and three million Trekkies, all of whom want to have his baby—that no other pro would write about him, even for money. So there.
Mike Resnick is the Hugo-winning author of
Santiago, Ivory, Lucifer Jones,
the Kirinyaga stories and about 200 other pieces of fiction that David Gerrold would have given his eyeteeth to have written.

by David Gerrold
SKIP THIS PART
NO, REALLY. I mean it. Skip this part.
You don’t have to read this page. I have nothing important to say.
I’m only going to explain how these stories were all commissioned for Mike Resnick’s silly anthologies, and I only wrote them because the anthologies were assigned to Resnick as his work therapy from the outpatient clinic, and a lot of us in the science fiction community generously dashed off little quickie throwaway pieces so Resnick could pretend he was an editor again and start to rebuild his fragile self-esteem. (I won’t go into all the details, but the breakdown was really tragic and unnecessary, especially since all the members of the girl scout troop magnanimously agreed to drop the charges if he’d go into therapy and move out of the state. As he was already out of the state, whereabouts unknown even to the FBI, he was halfway in compliance, and then when the videotapes were all destroyed in a fire of suspicious origin, the Grand Jury refused to return any indictments, so he was free of the criminal complaints as well as the civil ones, but the stress on his family was significant, and well—never mind. I don’t want to violate Resnick’s confidentiality. He used to be almost a nice guy, before the unmentionable situation got out of hand, and for a while there it was
really messy
, okay? Do you need to know any more? No, of course not. But you keep reading anyway, probably in the morbid hope that I’ll mention something about how he got that unusual scar, and why he was caught climbing the trellis at the Richard Nixon library in San Clemente and who the umbrella man really
was, right? Did it ever occur to you that
none
of that is any of your business? For God’s sake, already, leave the poor guy alone! He’s earned his privacy. Paparazzi and vultures, all of you!)
The point is, that you really shouldn’t be wasting your time reading any of this. You can turn the page now and go on to the stories, which are far more worthwhile than plowing through another three or four pages of self-serving treacle by an author who doesn’t like writing introductions and forewords, and doesn’t care if you read this one or not. We just need a bunch of words to fill up the page so that it looks like there’s a real foreword in the book. So, you can stop reading, right here. Right now. Stop. (Dave, stop. I can feel it, Dave. Stop.)
You’re not going to stop, are you?
Nothing I say here is going to stop you from continuing ruthlessly on to the end of the essay. You like standing around and watching people clean up after automobile accidents too, right? You’re one of those people who slows down on the freeway after an accident to gawk at ambulances and fire engines and smashed fenders. What’s the matter? Haven’t you ever seen an accident before? Haven’t you ever realized that you’re causing traffic to back up for three miles behind you? All those cars sitting there, idling, their engines burning up irreplaceable megagallons of precious petro-chemicals, pouring hundreds of tons of pollutants into the atmosphere, hastening the ecological death of the planet, all because you cannot control your obsessive-compulsive behavior to know every last detail, every little jot and tittle of disaster that passes helplessly before your attention, even when
you
are the disaster!
Well, I for one am not going to be a party to this any longer. I am not going to be an enabler for your bad habits.
ADS
15.4Mb size Format: txt, pdf, ePub