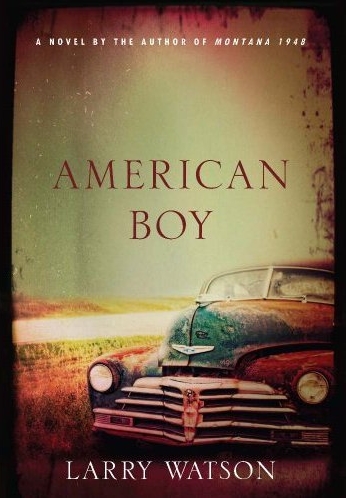 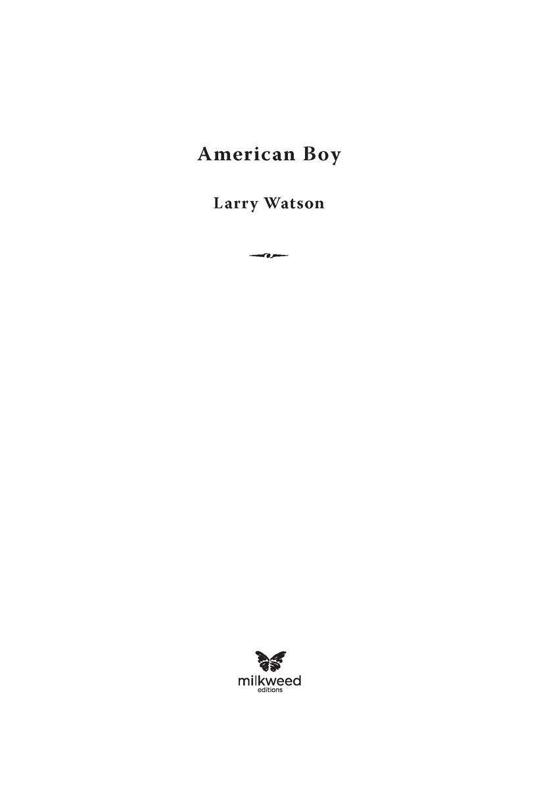 I WAS SEVENTEEN YEARS OLD when I first saw a woman’s bare breasts, in itself an unremarkable occurrence. But when you consider that I also saw my first bullet wound on that same body, you have a set of circumstances truly rare. And if the boy standing beside me that day had not already been as close as a brother, the experience would have bound us to each other in a way even blood would find hard to match.

We were exposed to these phenomena in order that we might learn something, but then the lessons we learn are not always those we are taught....

ON THANKSGIVING DAY IN 1962 I was seated at the dining room table with the Dunbar family, father and mother, eight-year-old twins Janet and Julia, and Johnny, who was my age. In fact, there were people in Willow Falls, Minnesota, who believed that the Dunbars had two sets of twins, so inseparable were Johnny and I. That one of us was dark and the other fair, one taller and one slighter, wouldn’t necessarily have dissuaded anyone from that belief; after all, sturdy Janet was blond and waifish Julia brunette. And since I walked in and out of the Dunbar house as I pleased, why wouldn’t someone assume that Johnny and I shared a last name?

But I was a Garth, an outsider, though this was genially ignored by the Dunbars. A few years earlier, when Miss Crane assigned
Wuthering Heights
to our eighth-grade English class, I was among the few who read the novel with interest. I identified with Heathcliff, not only because his brooding, headstrong character reminded me of my own, but also because I, too, had been welcomed into a prosperous, loving family. In fact, if my waking hours could have been totaled up, they likely would have revealed that I spent more time at the Dunbar house than I did at my own.

Where, incidentally, a holiday meal was not being served. My mother worked as a waitress at Palmer’s Supper Club, and Sam Palmer always remained open on holidays for the few customers who didn’t care to cook for themselves. Before she left for work she’d said she was sorry and offered to cook a turkey another time, just for the two of us, but I waved off her apology. She couldn’t afford to pass up the hours.

Besides, I was right where I wanted to be, sitting at the long mahogany table, candlelit and covered for the occasion with a linen tablecloth, and set with the dishes and silverware that appeared only on holidays. Despite the table’s ample proportions, there was not enough room for all the food Mrs. Dunbar had prepared. On the sideboard waited apple and pumpkin pies, an extra bowl of stuffing, a basket of rolls, and a sweet potato casserole. The meal would be wonderful, of that I was certain. Mrs. Dunbar was an excellent cook, a woman who took more delight in the preparation of food than its consumption.

Dr. Dunbar had just finished carving the turkey—repeating in the process the joke he made every year about how his surgical training finally came in handy—when the doorbell chimed. Calling uninvited on Thanksgiving generally would have been perceived as rude in Willow Falls, but not at the Dunbar home.

A few of the older people in the community still referred to the Dunbars’ grand Victorian mansion on the edge of town as the Gardiner place, after the wealthy merchant who built the house early in the twentieth century. But shortly after moving in, Dr. Dunbar had an addition built onto the house, and it was there that he practiced with George McLaughlin, the doctor who took the young Rex Dunbar into his practice, bringing the Dunbars to Willow Falls. Initially the doctors kept their offices downtown, on the second floor of the building that had Karlsson’s law firm and Burke’s Pharmacy on the first, but once the new addition was completed, they moved into the Dunbars’ house, along with Betty Schaeffer, their nurse-receptionist. Patients who required treatment beyond what doctors Dunbar, McLaughlin, or the four doctors in the Cumberland Clinic could provide had to travel fifty miles to the nearest hospital, which was located in Bellamy, Minnesota. Not until 1976 would Willow Falls have its own hospital, though the project had been proposed and debated for decades.

Because of Dr. McLaughlin’s age, Dr. Dunbar handled the more difficult cases, performed all the surgery, and put in the longest hours. But he did so without complaint, and if someone rang the bell, even on Thanksgiving Day, Dr. Dunbar would never consider not answering the call of duty. It might be Mr. Kolshak, clutching a hand that required stitches because the knife slipped when he was carving the turkey. Or it might be Mrs. Shea, hoping that the doctor could come and take a look at her father, who had hurt his back shoveling the snow that drifted over Willow Falls the previous night. In any case, it was unlikely that someone would intrude on the Dunbars’ holiday for any reason but an emergency.

Nevertheless, after rising to his feet, Dr. Dunbar paused. He lifted his pocket watch from his vest, snapped it open, and gazed at it almost as if he were posing. Dr. Dunbar was a charming, confident man, and an imposing physical specimen. He was movie-star handsome—heavy browed and square jawed—and his wavy black hair was combed back tight to his skull. Amid his large features, his pencil-thin mustache was almost lost. He was six foot three, broad shouldered and barrel chested, and he moved in a way that suggested power and self-assurance. He was an impeccable dresser and he favored three-piece suits, which he purchased in Minneapolis.

Dr. Dunbar placed his watch back into his vest pocket, smiled apologetically at all of us sitting around the table, and excused himself. Because we all knew that there had to be an emergency, and because Dr. Dunbar’s departure inevitably meant that the room lost its energy, we waited in silence for his return.

Alice Dunbar was her husband’s opposite—shy, timid, and tiny. She was, however, his match in looks—a fairhaired, fine-featured beauty. When they were together in public, someone would inevitably remark on what an attractive couple the Dunbars made, and how obvious it was, from the way she gazed up at him, that Alice Dunbar adored her husband. In fact, her need for him was such that even ordinary moments could be difficult for her to manage without his direction and vigor. And so when the doctor left to answer the door, Mrs. Dunbar did nothing to sustain or stimulate the conversation. She just sat there patiently fingering the pearls of her necklace, as if counting them could substitute for counting the minutes of his absence.

He came back wearing a somber expression. “That was Deputy Greiner.” As if he needed to assess each of our ability to endure his forthcoming announcement, the doctor looked around the table. He didn’t pause long when he came to me. He knew I wouldn’t flinch.

“There’s been a shooting,” the doctor went on. “The victim is a young woman by the name of Lindahl. Louisa Lindahl?”

The name was not familiar to any of us, so Dr. Dunbar continued. “According to the deputy, it’s a strange situation. A man has confessed to the shooting and turned himself in, but we don’t have a victim.”

Dr. Dunbar paused again. “Here’s what the deputy told me. Miss Lindahl and her boyfriend—Lester Huston? That name mean anything? No? Anyway, this young couple had a quarrel, and it was heated, so heated that Huston took a shot at Miss Lindahl. He claims he was provoked, that she threw a soup can at him. And here’s the part I’m not clear on: Either Miss Lindahl tried to run away from him and he fired at her as she was fleeing, or he fired at her and then she ran. Whatever the case, she got away, but there is no doubt in Mr. Huston’s mind that he shot her. Deputy Greiner is convinced of this as well, and not only because people don’t turn themselves in for crimes they didn’t commit. He also found corroborating evidence. Huston was living in a shack on this side of Frenchman’s Forest, and when the deputy visited the scene he saw some blood on the ground. Greiner tried to follow the blood trail, but he lost it in the woods. Then he came here. He wanted me to know that Miss Lindahl is likely still out there bleeding from a gunshot wound. Or—and we certainly have to consider this possibility—she might be dead already. And now I need to decide whether to stay put, ready to treat this young woman in case they bring her here, or to join the deputy and the other men he’s rounded up for the search party. That way I could be right there to treat her in the field.”

Once again the doctor surveyed the table, looking steadily at each of us in turn. Dr. Dunbar was not a weak or indecisive man, and it was unlikely that he was actually seeking counsel. As it was, Dr. Dunbar had already gone beyond what most fathers would have done. In that time and place—a small Midwestern town buttoned up tight with the early sixties’ sense of decorum—few fathers would have shared these details with their family, much less asked for advice. A few heads of households might have called their wives aside and apprised them of the situation, but to involve the children was almost unheard of.

Nevertheless, I offered an opinion, which was testimony to my brashness rather than to any wisdom or practical judgment I might have possessed. “You could stay here,” I suggested, “and Johnny and I could try to help find her.”

“Well, there’s an idea. And not a bad one,” Dr. Dunbar said. “Well? Anyone else want to weigh in? Either in favor of Matthew’s proposal or not.”

The Longest Holiday by Paige Toon
In Plain Sight by Lorena McCourtney
The Good Thief by Tinti, Hannah
Leaping by Diane Munier
The Wharf Butcher by Michael K Foster
Passion and Surrender (The Billionaire's Temptation Book 6) by MacKay, Cali
The Green Hills of Home by Bennet, Emma
Resistance by K Larsen
Tainted Legacy (YA Paranormal Romance) by Hope, Amity
For The Sake of Her Family by Allen, Diane