Read American-Made: The Enduring Legacy of the WPA : When FDR Put the Nation to Work Online

American-Made: The Enduring Legacy of the WPA : When FDR Put the Nation to Work 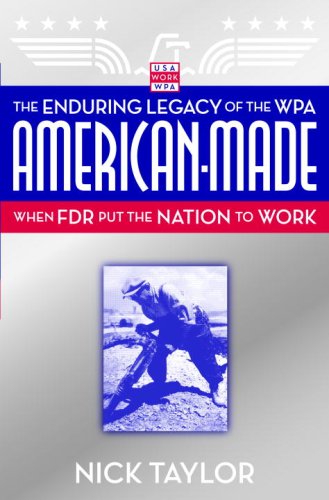 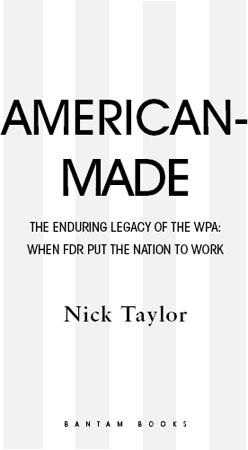 PART I:
IN EXTREMIS

2. THE PEOPLE ON THEIR OWN

4. THE PHILOSOPHY OF “RUGGED INDIVIDUALISM”

6. THE PROBLEM WITH LAISSEZ-FAIRE

7. RUMBLES ON THE LEFT

8. THE GUNS OF DEARBORN

10. ROOSEVELT ONTO THE STAGE

11. THE BATTLE IS JOINED

PART II:
HOPE ON THE RISE

1. JOBS FROM THE SKY (AND NOWHERE ELSE)

2. AN AGONY OF WAITING

5. THE PASSION OF HARRY HOPKINS

7. THE DESIRE TO WORK

8. THE BIRTH OF THE CIVIL WORKS ADMINISTRATION

11. THE JOBS THAT PAID TOO MUCH

12. THE BRIEF SHINING LIFE OF THE CWA

PART III:
THE DAWN OF THE WPA

1. TOWARD A PERMANENT JOBS PROGRAM

1. DEATH OF A POPULIST

4. A LODGE AT THE TIMBERLINE

9. AT WORK ON THE TIMBERLINE (LABORER AND HELPER HENRY MOAR)

1. THE DILEMMA OF ART AND POLITICS

6. THE ART PROJECT: MURALS AND INTRIGUE

7. THE INDEX OF AMERICAN DESIGN (AND COMMUNITY ART CENTERS)

10. AT WORK FOR THE WRITERS’ PROJECT (RESEARCHER THOMAS C. FLEMING)

PART VI:
THE PHANTOM OF RECOVERY

1. FLOOD ON THE OHIO

4. WPA CUTS AND THE “ROOSEVELT RECESSION”

5. THE ROOSEVELTS AT TIMBERLINE

PART VII:
THE WPA UNDER ATTACK

1. WAR AMONG THE DEMOCRATS

2. THE RISE OF THE RED-BAITERS

7. CHANGES IN THE WIND

8. CAN ANYBODY SPARE A HOT SCHOOL LUNCH?

9. THE DEATH OF THE THEATER

11. A FEVER OF PREPARATION

EPILOGUE:
THE LEGACY OF THE WPA

SOME HIGHLIGHTS OF THE WPA

T
he human toll of the Great Depression of the 1930s is almost impossible for us to fathom. When Franklin D. Roosevelt took office as president of the United States in March 1933, as many as 15 million people—a quarter of the nation’s workers—had no jobs and no hope of finding one. Factoring in their families, this meant that in a nation of 130 million, perhaps 60 million were literally without support: no money for rent, no food to feed their children, no coats against the wintry cold. Factories lay idle, storefronts vacant, fields plowed under. State governments, cities, and towns had exhausted their meager relief funds. The desolation knew no boundaries: the skilled and the unskilled alike stood on the breadlines, waited their turns in soup kitchens, scavenged in town dumps; when they were evicted from their homes they built impromptu shacks to house their families until the police came and knocked the shantytowns down.

When Roosevelt took over the reins of government from Herbert Hoover and worked to gain a foothold in the struggle against starvation and homelessness, his first step was to provide direct relief—the dole. The handouts ranged from cash payments to surplus food and clothing, but these were emergency measures to fill basic necessities. They did not alter the underlying problem of unemployment, nor did they address the singular—and vital—human need: the urgency of maintaining dignity.

The president’s instinct that it was far better to give people work than handouts was shared by Harry Hopkins, the shrewd and savvy former social worker Roosevelt chose to administer the relief program. Even in this era of remarkable characters, Hopkins stood out. He had no patience with foot-dragging politicians who mouthed good intentions but didn’t back their words with votes—and he said so. He was a lightning rod for action, fiercely honest, hated by conservatives, reviled by the anti–New Deal press, and adored by the people who worked for him. He created jobs in the initial relief programs but it was not until the Works Progress Administration—the WPA—was established by presidential act in 1935 that jobs became the focus of relief and gave genuine hope to formerly jobless workers.

In turn, they shouldered the tasks that began to transform the physical face of America. They built roads and schools and bridges and dams. The Cow Palace in San Francisco, La Guardia Airport in New York City and National (now Reagan) Airport in Washington, D.C., the Timberline Lodge in Oregon, the Outer Drive Bridge on Chicago’s Lake Shore Drive, the River Walk in San Antonio—all these accomplishments and countless others are WPA creations. Its workers sewed clothes and stuffed mattresses and repaired toys; served hot lunches to schoolchildren; ministered to the sick; delivered library books to remote hamlets by horseback; rescued flood victims; painted giant murals on the walls of hospitals, high schools, courthouses, and city halls; performed plays and played music before eager audiences; and wrote guides to the forty-eight states that even today remain models for what such books should be. And when the clouds of an oncoming world war eventually shadowed Europe in darkness and loomed over the United States, it was the WPA’s workers who modernized army and air bases and trained in vast numbers to supply the nation’s military needs. In fact, there was scarcely anything they did not do.

The WPA lasted for eight years. Its accomplishments were enormous, yet during its lifetime it was the most excoriated program of the entire New Deal. Its workers were mocked as shiftless shovel leaners. Its projects gave rise to a mocking new word: “boondoggles.” Red-baiting congressmen called it a hotbed of Communists. Its very initials became a taunt; WPA, said its critics, stood for “We Piddle Around.”

And at the end of its life, amid the global fight to save democracy that was World War II, the WPA sank virtually unnoticed. On July 1, 1943, as the United States and the Allies fought against the Axis forces of Nazi Germany, fascist Italy, and Imperial Japan that had conquered much of Europe and the Pacific Rim of Asia, the WPA’s obituary was buried on page 9 of the
New York Times,
along with the news that a San Francisco jury had found bandleader Gene Krupa guilty of contributing to the delinquency of a minor for having his young valet carry marijuana cigarettes. “WPA Pays Up and Quits” read the single-column headline, followed by four brief paragraphs. These described the Work Projects Administration, as it was known then, in skeletal statistics. Unnamed officials said that the “WPA spent about $10,500,000,000 and employed 8,500,000 persons since its inception in 1935,” and that it had sent back $105 million in unspent funds and $25 million worth of supplies and materials to the U.S. Treasury.

Like the spiritless obituary of a forgotten celebrity, the perfunctory notice gave no hint of the passions its subject once inspired. It barely suggested the WPA’s sweeping, nation-changing mission. It said nothing at all about its incalculable value in rebuilding—and often actually building—the country’s infrastructure and training vast numbers of workers to meet the demands of wartime. It left unmentioned its place in the national consciousness: the turmoil it generated, the vitriol hurled at it, the controversies that swirled around it. Politicians had grown hoarse in attack and just as hoarse in its defense; yet after consuming miles of newsprint and vats of ink, the WPA was reduced at its death to numbers on a balance sheet.

It died because it no longer had reason to exist. War production had America’s factories turning out planes, warships, and cargo vessels; guns big and small, and ammunition to feed them; Jeeps, tanks, and troop carriers; tires, clothing, and boots; medical supplies. Refineries were working to capacity. With men fighting overseas, labor of all kinds was in short supply. Women put on coveralls and safety goggles, riveting and welding to help meet the industrial labor shortage; what seemed like novelty at the start quickly became the norm. The 25 percent unemployment rate of a decade earlier would reach 1.9 percent in 1943. The next year it would fall below 1 percent. Breadlines and shantytowns were a bad memory, now that the WPA had made it possible to forget them.

World War II raged on for two more years, and when it was over, rather than look back at an anguishing past, Americans were ready to move on. They stored their memories of the depression in a dim corner of the attic and passed along its traumatic residues to new generations in the form of ludicrous habits of thrift. My parents rinsed off aluminum foil and reused it, spread out wet paper towels to dry. Only recently, in a newly “green” world, have practices such as these taken on new credence.

In the same way, the contributions of the WPA have gradually emerged from unawareness. They are drawing renewed attention now, not only for the program’s arts and brick-and-mortar legacies but also for its example. The Roosevelt administration placed an extraordinary bet on ordinary people, and the nation realized a remarkable return. The story of the WPA reminds us that the backbone of the United States is the strength, the patience, and the underlying wisdom of its people when they are called upon to face a crisis and are given the means to overcome it.

That story starts in a country that was on its knees.