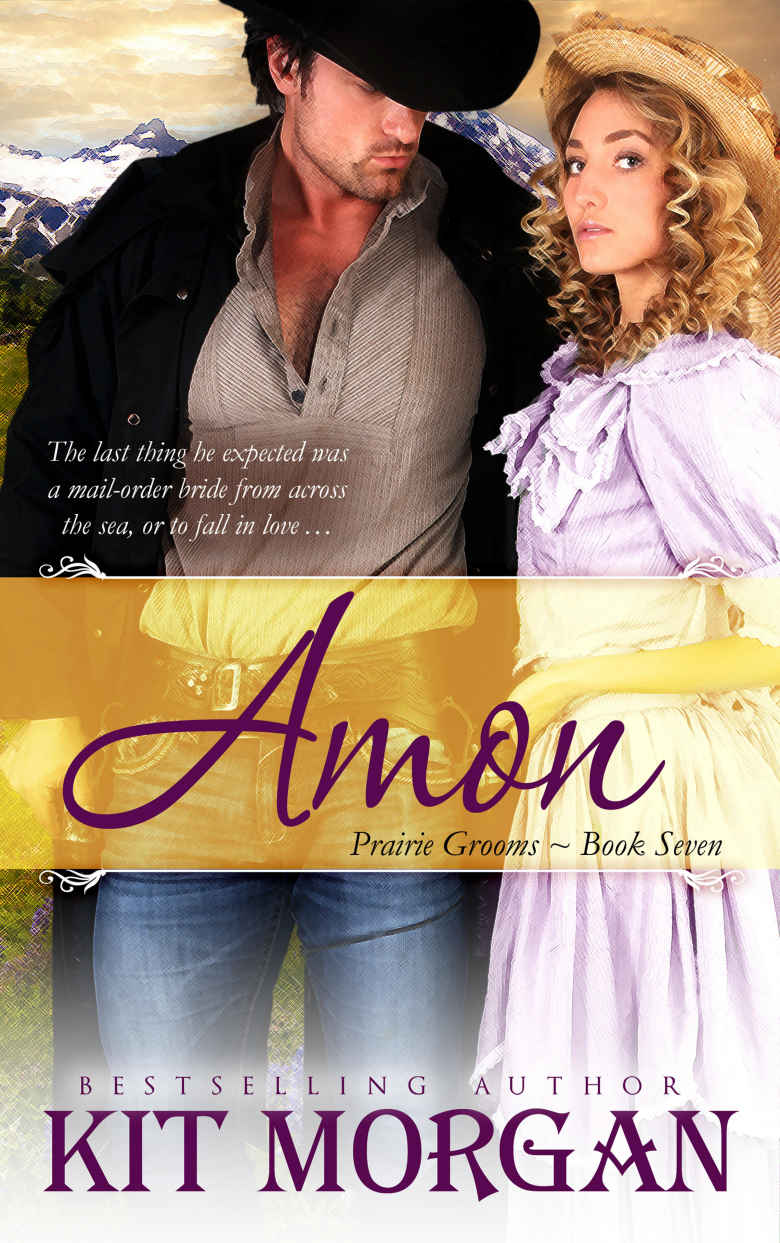 Other titles by Kit Morgan:

All rights reserved. No part of this book may be reproduced in any form, except for brief quotations in printed reviews, without permission in writing from the publisher.

All characters are fictional. Any resemblances to actual people or livestock are purely coincidental.

This e-book is licensed for your personal enjoyment only. This e-book may not be re-sold or given away to other people. If you would like to share this book with another person, please purchase an additional copy for each recipient. If you’re reading this book and did not purchase it, or it was not purchased for your use only, then please return and purchase your own copy. Thank you for respecting the hard work of this author.

There is a legend, they say, of those with hearts that grow to a point where they must share it with another, or suffer the consequences. And once shared, one cannot live without the other …

The Duke of Stantham paced behind his massive desk. “You do realize what you’re asking of me?”

Newton Whitman stood on the other side, his face locked in firm resolve. “I do.”

“After all, your father Thackary Holmes isn’t the most popular chap amongst the Sayer family.”

His Grace Duncan Sayer stopped pacing and looked at him. “Have you ever met him?”

“No. And at this point, it is my sincere hope that I never shall.”

“What about your sister?”

“She feels differently than I do. She believes in …
forgiveness.
”

“I believe in justice.”

“I see.” He sat and indicated Newton should do the same. “I’m familiar with your mother’s family. Your grandfather the Baron was a friend of my grandfather’s, as I recall. Nice fellow. As is apparent from his treatment of you and your sister. He didn’t have to raise you in his household. He could have left the two of you to the whims of the London streets.”

“But he didn’t. However, we have our mother to thank for that, not the Baron.”

“The man, has, put a roof over your head all these years,” Duncan pointed out.

“He put me to work in the stables and made Nettie into nothing more than a servant after our mother died. Now he seeks to be rid of her all together. I’ll not stand by and watch him marry her off to some witless worm!” Newton looked away and swallowed hard in an effort to calm himself. “Your Grace … I must get her away from here. I cannot let him do such a thing.”

Duncan studied him. The younger man’s shoulders shook with intense emotion as his dark eyes flashed. They were in sharp contrast to his honey-colored hair. Newton Whitman – correction, Newton
Holmes
– was obviously a passionate man, especially when it came to the people he loved. Duncan smiled. He could definitely relate to that. “I think I can help you, but you must be prepared for the worst in case things don’t go as planned.”

“My brothers are reasonable enough. If I send a letter with your sister, I’m sure they’ll find her a suitable husband in no time.”

“Your brothers?” Newton said as he leaned forward. “But I heard they were in America.”

“But Your Grace, that means you’d be sending Nettie to …”

“America, yes. Clear Creek in the state of Oregon, to be exact.”

Newton fell against his chair, eyes wide with shock. “I can’t let you send her there. She’d never make it on her own. Oregon … isn’t that … in the West?”

“Indeed it is, my fine fellow.”

“But why don’t you go with her? Act as escort?”

“Unless you’d prefer to stay on as the Baron’s stable boy?”

Newton became tight-lipped again. He was far beyond a simple stable boy at this point. He was the stable’s master, a position he’d fought long and hard for. To give it up meant giving up a good future. He wanted to breed horses and had become quite adept in his knowledge of bloodlines, both current and old. He’d even experimented with a few, with outstanding results – one of the few things his grandfather the Baron approved of. “But Oregon …”

“Clear Creek,” Duncan added. “It’s a small town, but full of single men, all in want of a good wife. Of course she’ll have to cook and clean and such, but from the sounds of it, she already knows how.”

“Indeed, she does.” Newton mumbled as he balled his hands into fists.

Duncan studied him a moment before adding, “More to the point, you both could start a new life there. The people are friendly, kind, generous to a fault, and you’ll find no better neighbors. Besides, your sister would be free to choose her own husband.”

Newton looked up at him. He’d been staring at the desk. “Freedom,” he whispered.

“Yes. Especially freedom from your association with Thackary Holmes.”

Newton closed his eyes a moment. Nettie would no longer have to put up with the cruelty of the other women on the Baron’s estate. It was bad enough being a by-blow, but when the Baron reduced his sister to a servant in his home, the female staff in the house were quick to turn on her. And all because Nettie still had hopes of marrying, albeit with help from the Baron. But the prospects were less than desirable to say the least, and Nettie was too young and pretty to be wasted on the likes of some old lecher. “All right. I’ll do it. I’ll take her.”

“Good. I knew you’d see reason. And I’m sure that in time my family can help you find a suitable wife as well.”

“There are plenty of eligible bachelors in Clear Creek, but no eligible women. I’m afraid you’ll have to wait much longer than your sister to marry. I’m sorry, but that’s the way of it in the American West. At least it was when I left. It’s why I sent my cousins there.”

“You’ll pardon my ignorance, Your Grace. I’d heard you’d managed to marry them off, but had no idea you’d sent them to America to see it done.”

“My cousins needed good husbands. Clear Creek needed respectable women. I saw it as an opportunity to help both. I’ve no doubt the place could use more women.”

“Nettie will be well taken care of, then …”

“If you’re there, you can see to it personally, meet the men who want to court her. And besides, I’m sure she’ll feel much better about the journey when she finds you’ll be coming along as her protector.”

Newton stared at him. “Indeed she shall.” He stood. “I must tell her.”

“You’ll need a letter from me excusing you from the Baron’s employ.”

“Yes, you’re quite right. He might not let me go otherwise.”

Duncan came around the desk and put an arm on his shoulder. “Mr. Holmes.”

“Newton,” Duncan said with a smile. “You could start your own business in Clear Creek. You wouldn’t have to answer to your grandfather’s every whim anymore. I can tell you’re tired of doing so.”

Newton gave a slow nod. “Yes, though I was beginning to see a future there as well. But one has to do whatever it takes …”

“And you will on this journey, I’m sure. Protect your sister, see that she arrives safely, then see her married. After that, the world is yours.”

Newton stared at him as a shiver went up his spine. He’d never had the freedom to think such a thing, let alone do anything about it. He took a deep breath and held out his hand to the Duke. “Thank you, Your Grace. You are most kind.”

Duncan smiled. “Remember that when you meet Mrs. Dunnigan, won’t you?”

“She and her husband Wilfred own the town mercantile.”

Newton raised one eyebrow in curiosity.

“Let me put it this way … if Napoleon had had Irene Dunnigan on his side, the battle of Waterloo might have turned out differently.”

Newton’s other brow went up. “I shall steer clear of her, then.”

“No way to do so in a small town. Just bear in mind that she’s more bark than bite.” He patted Newton on the back. “I’ll make all the arrangements. You’ll not have to worry about a thing.”

Newton nodded numbly as the Duke steered him toward the double doors of his office. He still had plenty to worry about. Like, how was he going to tell his sister?