An Affair in Winter (Seasons Book 1) 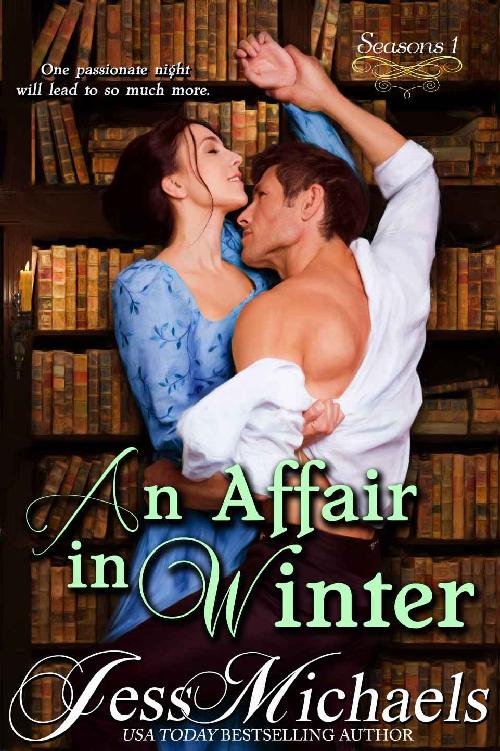 An Affair in Winter

An Affair in Winter

Jess Michaels raffles a FREE gift certificate EVERY month to members of her newsletter, so sign up on her website:
http://www.authorjessmichaels.com/

There are so many people to thank for this book making it to publication that it could make a book itself. But here we go:

Thank you to Audrey Sharpe and Vicki Lewis Thompson who helped me wiggle through some plot holes when Gray and Rosalinde's story was just a scene in my head.

Thank you to the amazing Jenn LeBlanc. Doing the custom cover shoot for this book was not only so fun that it shouldn't be legal, but it helped me hone my entire process. An extra shout out to Ellen, Shelly and Kim for their hard work on the day. Also to Tricia Schmitt for tuning those images into a gorgeous cover.

To the cover models, Ashley and Dean: having you two in my head while finishing the book made these characters even more real. Thank you for smoldering and being good sports.

Next, a huge thank you to my "team". Mackenzie Walton, the editor *everyone* should hire because she's great. Millie Bullock, my mama and copyeditor.

And, of course, Michael. For putting up with my quirks and questions and loving me through it all. Like Rosalinde, I tend to live my life with my arms wide open, and knowing you are there makes that so much more amazing.

Rosalinde Wilde pulled the edges of her worn pelisse tighter around her body, and yet she still shivered. The thin fur lining did almost nothing to block out the bitter wind that seemed to swirl in the carriage. Her poor maid, Gertrude, huddled closer, the two women seeking body heat to save them from the chill.

“Great God,” Rosalinde muttered as she fought to keep her teeth from chattering. “Grandfather meant to punish me by making me take the oldest carriage in his fleet to Stenfax’s estate, but this is beyond the pale.”

Gertrude shrugged. “H-how could anyone guess that a snowstorm would hit in October?”

Rosalinde kept her counsel on that question. She feared that even if her grandfather had known a chance storm would overtake them on the road, he might have still forced her to follow him and her beloved sister Celia to the country now instead of allowing her to accompany them when they had made their own trek ten days before. After all, he claimed Rosalinde was a bad influence on Celia. And he seemed to like hurting them both.

A blast of loud wind hit the vehicle, rocking it back and forth violently. Rosalinde squeezed her eyes shut. Without the inclement weather, their carriage would normally be rushing along at a brisk clip. Now they hardly moved as the snow swirled and the wind howled. She pitied their poor groom Thomas and the driver, Gertrude’s husband Lincoln, who were forced to ride out in the elements.

Caraway Court. It was the estate of Celia’s intended, the Earl of Stenfax, where Celia would be wed in a fortnight. The name made it sound very grand, indeed, but Celia had written that parts of it were somewhat in shambles, proof of Stenfax’s need for a bride with a dowry. Of course, Celia needed to wed a man with a title, so the match was perfect.

Rosalinde sighed, determined to push away troubling thoughts. She squeezed Gertrude’s gloved hand and focused instead on comforting her frightened maid. Rosalinde was strong. She’d always had to be.

She smiled in the hopes Gertrude would not see her own hesitations and fears about the idea of being stranded in the freezing cold. But no sooner had she managed an expression she hoped didn’t resemble a grimace than the carriage came to a stop.

Rosalinde pulled back the curtain covering the drafty window. Outside the storm swirled on and the late afternoon sun was fading far faster than it should have been. Fear gripped her despite her best efforts to keep it at bay.

The carriage rocked again, and suddenly her groom appeared at the window. Thomas smiled shakily and opened the door. Although he tried to block it, wind and snow blew in around him.

“I’m sorry, Mrs. Wilde,” he said, “but I don’t think we can go much farther. There isn’t much snow itself, but the wind is blowing it around so much that it’s near impossible to see.”

Rosalinde nodded. “I can see it’s getting treacherous, indeed. But what are we to do, Thomas? We may freeze if we remain out in the elements overnight.”

Thomas shot the frightened Gertrude a look. “Lincoln has an idea,” he began.

Gertrude leaned forward, smiling at last, as she always did when she heard her new husband’s name. “Does he?”

Thomas pressed his lips together in worry before he said, “Aye. He says there is an inn a few miles east of the main road. If we can make it there, we’ll be safe for the night.”

“Mr. Fitzgilbert will be furious if we don’t make it to the estate as planned,” Gertrude whispered.

Rosalinde swallowed hard. That had been her own notion, and she couldn’t deny the anxiety in her chest when she thought of the potential for his wrath. Even an act of God like the snow wouldn’t appease her grandfather, she was certain.

She looked at her groom, his face bright red from exposure to the wind and cold. She could imagine Lincoln was just as miserable, not to mention the poor horses. There was no way she would deny them all shelter and perhaps sentence them to death.

“Grandfather can hang if he thinks I’ll get us all killed for the sake of his foolish timeline,” she said. “Thomas, tell Lincoln to try for the inn.”

Relief flashed over Thomas’s face, making clear how dire the circumstances were. He nodded. “I will, ma’am. But be warned, it will likely take close to an hour to get there on these roads.”

Rosalinde flinched at the prospect but forced a smile. “Just do your best.”

He closed the door and Gertrude reached out to readjust the curtains on all the windows to hold in as much heat as possible. As the maid turned her head, Rosalinde could see the increased worry on her face. The fear.

She reached out to touch Gertrude’s arm. “Gertie, Mr. Fitzgilbert won’t hold you responsible,” Rosalinde said softly. “I will ensure that he blames
me
for our delay.”

Rosalinde settled back against her seat and shoved her hands into her pelisse pockets. “Celia will worry, though,” she mused out loud.

“Yes, but she must be very caught up in arrangements for the wedding. That will distract your sister.”

Rosalinde pursed her lips. She wasn’t so certain of that fact. Celia was the most disinterested bride she had ever known. Neither she nor Stenfax seemed to have allowed emotion to come into the equation of their nuptials at all. After her own bitter experience with marriage, Rosalinde supposed she should be relieved that Celia wasn’t letting her heart lead.

And yet she was uncomfortable with the fact that her younger sister was only being practical. Would she be unhappy with that decision in the future? Would she regret being forced to make the choice Rosalinde had not?

Rosalinde glanced over to find Gertrude watching her closely. Apparently she was awaiting some kind of answer to her earlier statement about Celia’s impending wedding.

Rosalinde shrugged. “Well, worried or no, we’ll get there tomorrow and it will have to be enough. All we can hope now is that we arrive safely at this inn of Lincoln’s and that tonight is more uneventful than today has been.”

“How could
anything
be as eventful as today?” Gertrude asked with a laugh.

Rosalinde joined her in the laugh, for she knew in her heart that her maid was right. The inn couldn’t be anywhere as shocking as the road had been. Not at all.

Gray sat in the corner table at the Raven’s Wing Tavern, nursing his ale and watching the crowd fall in from the storm that raged outside. Normally he would curse the weather, which currently kept him from his business, but since he wasn’t actually looking forward to the duty before him, he toasted it instead.

“One more night won’t change a thing,” he muttered to himself.

He sipped the ale and grimaced. If the snow hadn’t forced him off the road an hour before, this was not the kind of establishment he would normally patronize. It was worn out, ill kept, and the ale was terrible. But beggars, it seemed, could not be choosers. A proverb that had always chafed Gray, as he was not accustomed to
begging
anyone for anything.

Even a drink. And it didn’t seem he had to, for the round innkeeper’s wife who had greeted him and shown him to his small but serviceable room when he arrived now stepped up beside him with another tankard in her hand.

He smiled his thanks. “You are getting busy,” he said, nodding toward the door where another group of travelers had just staggered in, brushing snow from their clothing as they were welcomed by the portly innkeeper.

The woman’s eyes gleamed with greedy pleasure. “Aye. When you travelers lose, it seems we win. We have only a room or two left for the night.”

Gray tilted his head. “And what happens when they are full? Being stuck in this storm could be deadly.”

“My husband says we’ll stack them out in the great hall here like firewood,” she said, rubbing her hands together with glee, “and charge them half of what we’d have them pay for a bed and a fire of their own. We’re already doubling up the servants in the back.”

Gray pursed his lips. He was glad he’d gotten his room when he had, for the idea of sleeping out here in this sea of wet and sniffling humanity was unpleasant, indeed.

The door opened yet again and a swirl of snow entered before the new arrival. As the door was shut and the flakes fell away, Gray straightened. It was two women who had entered this time. They were obviously lady and servant by their posture. The lady wore a red coat, its hood up around her face. When she pushed it back, Gray caught his breath.

She was stunningly beautiful. Her dark hair was almost jet black, but her eyes were icy blue, piercing the room even from the distance between them. She was the kind of woman who men turned to stare at if she passed them on the street. Now the main hall of the inn grew silent as those within did just that. The lady shifted as a grumble rustled through the crowd of mostly men.

The Venetian Venture by Suzette A. Hill
Vada Faith by Whittington, Barbara A.
Saving Grace by Anita Cox
The Mailroom: Hollywood History from the Bottom Up by Rensin, David
Crash and Burn (Crash and Burn, Book One) (A Military Romance) by Eva Grayson
The King Is Dead by Griff Hosker
Strolling Into Danger (A Seagrove Cozy Mystery Book 6) by Leona Fox
Red Glass by Laura Resau
The Pagan's Prize by Miriam Minger
Herself by Hortense Calisher