Read Angel of the North Online

Angel of the North 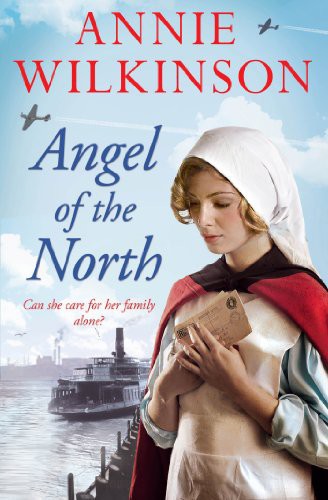 Angel
of the
North

The daughter of a Durham miner, Annie Wilkinson now lives in Hull where she divides her time between supporting her father and helping with grandchildren.

The right of Annie Wilkinson to be identified as author of this work has been asserted by her in accordance with sections 77 and 78 of the Copyright, Designs and Patents Act,
1988.

This book is a work of fiction. Names, characters, places and incidents are either a product of the author’s imagination or are used fictitiously. Any resemblance to
actual people living or dead, events or locales is entirely coincidental.

Every effort was made to contact the copyright holder to request permission to reproduce the extract from ‘Antigonish’ by Hughes Mearns. Any copyright holders
should get in touch with Simon & Schuster UK Ltd.

This book is dedicated to the firemen, engineers, rescue workers and medical and nursing staff of Wartime Hull.

I am indebted to:

Esther Baker,
A City in Flames
– A firewoman’s recollections of the Hull Blitz, which I highly recommend.

Rex Needle, writer, researcher and photographer of Bourne, Lincolnshire, for his impressive website and CD. The people of Bourne housed 900 evacuees during the Second World
War, keeping them safe from the bombing in Hull. Most of the children remained until the war ended and many made lifelong friendships. The infamous Mortons of my story are complete fictions, and
bear no resemblance whatsoever to anyone in Bourne.

Brian Pears of Gateshead, for permission to use information from his very informative website, North-East Diary, Bridget Renwick, Alumni Relations Administrator of Hymers
College, for unstinting help with the wartime history of Hymers.

Jean, of Keel Road, for sharing her memories.

All the volunteers at the Carnegie Heritage Centre in Hull.

The staff of Hull History Centre.

At the sound of the bombers Marie Larsen froze. The ominous thrum-thrumming of their engines was rapidly followed by the rattle of anti-aircraft guns. The doctor glanced up
from cutting down through layers of fat in search of a suitable vein in his patient’s well-covered ankle.

‘You stay where you are, Nurse,’ he said. ‘We might just have enough time to get this job finished.’

Typical of Dr Steele, Marie thought. She lifted her vivid blue eyes to his face. Just managing to keep the tremor out of her voice, she said: ‘I wasn’t going anywhere, Doctor,’
and turning to her patient gave him what she hoped was a look of reassurance that she was sorely in need of herself.

‘Soon be done,’ she told him. ‘A couple of pints of blood and you’ll feel like a new man.’

The words were barely out of her mouth when the night sky was lit by the eerie white light of chandelier flares. Next, incendiaries would come clattering down and bursting into flames. High
explosives and parachute mines would surely follow. With a mounting sense of dread, and praying that none of the bombs would hit the infirmary, Marie concentrated on holding the retractors
steady.

She had to live. All her fondest hopes, her most glorious visions of becoming Charles’s wife, of presenting him with his firstborn child, of becoming the mother of a large and happy
family, had to be fulfilled. Now every time she heard the hum of a plane she thought of Margaret, killed stone dead in James Reckitt Avenue during just such a raid as this.

Killed! It was the first time anyone really close to Marie had died, and the shock of it had knocked her sideways. She still couldn’t believe it – except that she surely did, because
it had robbed her forever of that ‘it can’t happen to me’ sort of confidence. If it could happen to Margaret it could happen to Marie herself and now, as soon as the sky began to
vibrate with the thrum, thrum, thrum of German aircraft, she trembled.

The patient was not reassured by her words of encouragement. His fleshy cheeks were pale, and his eyes rolled skywards. Sweat stood in large beads on his forehead and upper lip. ‘How much
longer?’ he moaned.

‘Not much,’ she said, forcing a show of confidence and raising her voice above the noise of planes and guns. ‘We’ll be all right. Only the good die young.’

Through a gap in the screens she saw those patients who could, taking shelter under their beds, the other two nurses in the ward along with them. The impulse to do the same was nearly
irresistible.

The doctor gave her a sardonic smile. ‘I take it you’re not good, then, Nurse?’

‘Not too good to live, I hope,’ she said, steadying herself to hold the incision open, now with the rattle of incendiaries and the ack! ack! ack! of anti-aircraft guns sounding in
her ears.

The doctor had a vein. As he inserted the cannula the screech of a bomb preceded an earth-shattering blast, shaking the floor beneath their feet.

‘Keep calm,’ Dr Steele insisted. ‘I want this job out of the way. I don’t want to have to do this again.’

Marie glanced up at his lined old face, its expression quite impassive. Dr Steele? Dr Nerves-of-steel, rather. Either he was very brave, or completely lacking in imagination. He had no bedside
manner, there was not much sympathy to be had from him, but he was a good man to be with in a crisis. He left you very little time to think of the people being bombed, or to worry about any of your
friends or family being among them; no time to think about ruined houses, or wonder whether your own home was still standing. But very soon they might all be dead and then his retirement would be
permanent. This might be the last time he’d ever have to do a cut-down to find a vein suitable for a transfusion; but he’d finish it.

Marie ran the blood through the tubing as fast as it would go and hung the bottle on the drip-stand. The doctor attached the end of the tube to the cannula, and started to suture the
incision.

The noise of the first wave of aircraft receded. Now from the south came the drone of an approaching second wave, followed by a whistling scream and then the deafening crump of a bomb, shaking
the hospital to its foundations, ripping off the blackout blinds, shattering all the windows and hurling lethal glass shards inwards with the speed of bullets.

‘Ouch!’ Marie almost jumped out of her skin when she felt a stinging in her left forearm, and saw that one of the smaller splinters had buried itself in her flesh.

With a palpitating heart she pulled it out, gritting her teeth against the pain. A deep gash about half an inch long gushed blood onto the sheet.

With his customary coolness the doctor took hold of her wrist and peered at the wound through his half-moon lenses. ‘That needs a stitch,’ he said, taking a lump of gauze from the
trolley beside him and slapping it on the wound. ‘Hold that on it for now, and go and see who else is hurt.’

Half a dozen bedfast patients were calling for attention, and the two other nurses on duty were hastening towards them. Pressing the gauze over her own cut, Marie went to make a swift inspection
of their injuries. On passing the broken windows she hesitated for a moment, seeing searchlights crisscrossing the sky. Some of the buildings – mostly business premises – on the other
side of Prospect Street were on fire. By the time she hurried back to report, the doctor had threaded another needle with black suture.

‘You manage to keep pretty calm,’ she said, shivering.

‘I’m a fatalist,’ he said. “If your name’s on it . . .” as people never stop repeating. And I’m an old man. I’ll soon be dead anyway. I might as
well go out with a bang as a whimper. All right, Nurse, sit down and calm down. I’ll start with you, since you’ll be needed to help evacuate the patients.’

‘No time. Unless I’m much mistaken, the house governor will soon cut the juice off, and we’ll have no lights. Be a brave girl. This won’t hurt a bit.’

Marie looked him in the eye. ‘Won’t hurt you, you mean.’

A bit of a sadist, Dr Steele, everybody said so. Marie hissed, drawing in her breath at the sting of the suture needle, the pain magnified by her keyed-up state. This seemed to afford him a rare
amusement, and he chuckled.

‘You must have been in your element when you were newly qualified, sawing people’s legs off with only a glass of rum for an anaesthetic,’ she said, after a minute or two of his
excruciating needlework.

His weary old eyes suddenly glinted up at her from under their bushy grey eyebrows. ‘But not as much as when I was giving my cheeky young assistant a good dose of the cat.’

At that moment, the place was plunged into darkness, except for the lurid red light thrown by the flames that were consuming nearby shops and houses.

‘There, what did I tell you? Lucky I got your stitch in,’ the doctor said, covering the gash with a dressing by the light of the flames. He taped it in place. ‘Now get up and
get on with it, Nurse. There’s plenty to be done.’

Marie got on with it as best she could in the devastated ward, calming the patients and preparing them for the transfer to the lower floor, to another ward at best, or a place in a corridor, if
the wards were crammed full. A porter rushed onto the ward with a trolley full of hurricane lamps and torches, and soon afterwards the night sister swept in to give them their marching orders.

‘It’s a miracle no one was killed,’ Marie remarked to Nurse Nancy Harding, as she kicked the brakes off the cut-down patient’s bed and began to push him in the direction
of the corridor.

Nancy walked alongside, holding the blood bottle in one hand and a hurricane lamp in the other. ‘Who’s the idiot?’ she asked, her face ashen. ‘Is it me that’s
missing something, or is it the house governor? Shutting the lights off! What for? To me, it’s bloody stupid. We’ve got to maintain the blackout, in case they spot where we are?
Hasn’t he noticed they’ve just been raining bloody bombs on us? They obviously know where we are! And I should think they could tell by their incendiaries now, if they didn’t know
already with their flares. I bet they can see us from Berlin. Can you see any sense in it?’

All Roads Lead Home by Wasowski, Mary
Must Love Dogs: New Leash on Life by Cook, Claire
The Silent Speaker by Stout, Rex
El caso de Charles Dexter Ward by H. P. Lovecraft
An Exaltation of Soups by Patricia Solley
Stranger in the Room: A Novel by Amanda Kyle Williams
Improbable Futures by Kami Garcia
Devil in the Wires by Tim Lees
Knock on Wood by Linda O. Johnston
The Devious Duchess by Joan Smith