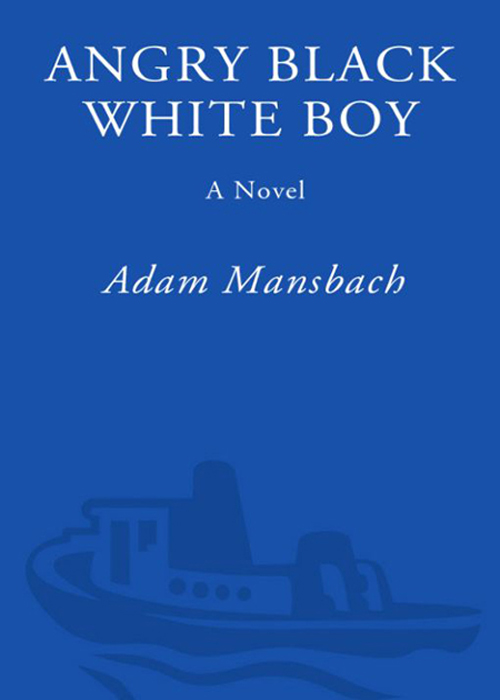 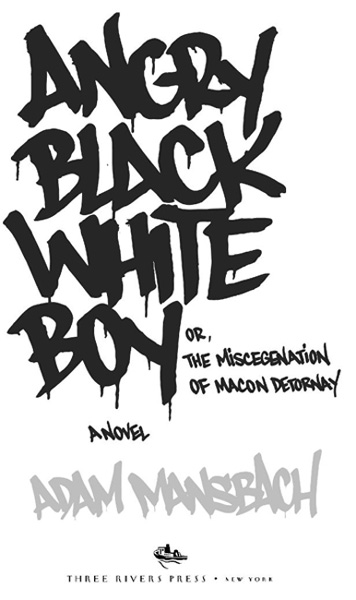 Prologue: - Letter from a Birmingham Bus

for my grandfather, Benjamin Kaplan,
and in memory of Elvin Ray Jones

“
Angry Black White Boy
gives new meaning to the term black humor. A singularly jittery blend of urban wit and southern Gothic, it’s a book of buoyant rhythm and dark material. A novel of ideas above all. . . . The book covers expansive intellectual and geographical terrain, [and] its drive never falters. Mansbach gets us there by creating a tense world whose figures often are at cross-purposes.
Angry Black White Boy,
like the truest expressions of hip-hop, graffiti, and jazz, is daring and original. It stings like its hero, Macon Detornay, a self-described scorpion of race.”

“A remarkably successful remix of the traditional race novel. Mansbach monkey-wrenches the formula of the angry black man in the white man’s world and incisively cuts to the heart of the issue of race in America today. [
Angry Black White Boy
] shows us where we as a culture have come from, the distance we have traveled, and how long the road ahead remains. It is first-rate satire grounded in the absurd notion that a simple ‘I’m sorry’ can start to make things better. The novel will make you laugh, cringe, and read until the last page without knowing how it’s going to end. It is difficult to imagine a more appropriate conclusion for the story of Macon Detornay, as the uncertainty of fiction dovetails with the uncertainty of reality.” —
San Francisco Chronicle

“A slash and burn novel of race relations in post hip-hop America. Sure to be dissected, reviled, misunderstood, and praised for years to come, which is exactly why you should read it now.”

“A hilarious, terrifying, and brutally honest novel about race and American identity. Satire at its finest, it should be required reading for anyone interested in the microscopically thin line between love and hate that defines race relations in America.”

“Painfully hilarious . . . brilliant . . . leaves readers searching for answers amid the absurdity . . . not for the fainthearted.”

“Adam Mansbach has written what will possibly become the quintessential twenty-first-century race novel, despite, or perhaps because of, the fact that the protagonist is white. A searing and dark tale of appropriated identity and racial stirring,
Angry Black White Boy
maintains a hilariously dark tone throughout.”

“A bold and layered examination of race in America.”

“Is a fresh take on race in America possible? In his breakout novel, Mansbach definitively answers: Hell yeah! A lyrical and ass-kicking romp.” —
Portland Mercury

“An engaging, cleverly worded tale that finally gives us something more than the rhetoric-filled fluff being touted as ‘hip-hop literature.’ An addictively good read comes in the form of
Angry Black
White Boy
—cop it.” —
Mugshot Magazine

“Subversive genius . . . a ferocious punt to the backside that leaves a Timberland print on your consciousness.” —
East Bay Express

“Hard-hitting. Not since Spike Lee’s
Bamboozled
has America seen as trenchant and unapologetic a satire as
Angry Black White Boy
.”

“This dude knows shit, and if you don’t . . . this read will send you well on your way. It’s over three hundred pages of comedy (dark), insight (powerful), and depth (deep).” —
Newcity Chicago

“Adam Mansbach’s novel is at once humorous and tragic as it delves into the complex issues of racial politics.
Angry Black White
Boy
should certainly provide a unique and welcome addition to anyone’s bookshelves and as such is certainly worth picking up; however, putting it down may be somewhat more problematic.”

“An amazing take on racial issues in the U.S. Beautifully told, the story grips you from the start . . . a race novel reworked for the hip-hop generation. It’s frank, to the point, and honest, and on top of that it’s one hell of a funny read, one you’ll find yourself going back to over and over.” —
UK Hip-Hop

“Seamlessly accurate, biting satire. . . . By the time Macon arrives at the cataclysmic riot that is the climax of the book, we know why he’s there, we can see what’s coming—and, as with the best horror films, we stick around to watch as the catastrophy hits.”

“Satire of the highest caliber, serious issues grounded in circumstances that at times are laugh-out-loud funny. With the same touch of humanism employed by writers such as James Baldwin and Ralph Ellison, Mansbach does for the issue of race in contemporary America what those two did for it as the Civil Rights Movement came to the forefront of American discourse.”

“An exercise in race consciousness that scours the clichés of white people’s awareness of racial privilege.”

“An engrossing story . . . never falters in its boffo momentum. Its hilarity is studied and each fantastic flight gets a counter-punch.”

“At turns hilarious and profoundly troubling, the novel serves as a meditation on hip-hop culture and its enormous influence on the psyches of white suburban youth.” —
Dose Magazine
(Canada)

“A literary gem and an insightful lens on the never-ending conundrum surrounding white youth’s fascination with black culture and black people. Mansbach explores these desires, conflicts, and contradictions with extraordinary passion, poetry, pain, self-critical awareness, humor, and complexity.
Angry Black White Boy
is a gripping story that will stay on your mind for a long time.”

Letter from a Birmingham Bus

I’m here to tell the white man in the mirror the truth right to his face. I have seen the enemy and he is me. No competition, I battle myself. I’m Macon Everett Detornay,
a white nigger in the uni
verse, to paraphrase both LeRoi Jones—whose middle name I share, or did before he changed his—and the Aryan Nation vis-àvis yours truly, with whom I share nothing but low melanin and politics unacceptable to mainstream America. Or so I thought.

Like Malcolm, I expect to be dead before I see these words in print. Naw, let me stop bullshitting. That’s a lie. I’m broadcasting live and direct from the getaway ride as the scene of the crime fades away into the speckled past and credits roll. I’d like to send this next one out to myself, special dedication to the one I love to hate, and I wanna give a big shout-out to the universe and New York City for believing in me when I’d stopped believing in myself. This award is for the little people. I wanna thank everybody who made me as bad as I could be, who boosted me until my noggin thumped against the glass ceiling of white people’s ability to give a fuck. I bled halfway to death trying to break on through and never made it, but guess what: I don’t give a fuck. I did my time, and now I know what I am.

And knowing is half the battle. What is it the scorpion says to the frog as they both sink?
I told you I was a scorpion, asshole.
Except that white folks aren’t drowning and black folks never agreed to give us a lift across the pond in the first place. Maybe on some spiritual Thurgood Marshall this-system-hurts-us-all level we’re drowning, but most of us don’t seem to have noticed. And luckily, we can afford the best in psychiatric care, antidepressants, and religion should we begin to feel the water lapping at our ankles.

So I’m a scorpion. Let me come to terms with it and get my scuttle down, cuz I done wasted years already trying to flap my nonexistent wings. Let me ease on back into the seat of privilege and lap the luxury out of some more complimentary drinks. Let me guzzle six hundred and sixty-six mind erasers and stop trying to be the exception to the rule, the face that wasn’t in jailbird Malcolm’s memory banks when the wise old Muslim inmate asked him if a white person had ever treated him right. Shit, if that face had existed, maybe Malcolm never would have. One good white person might have finished him before he started, and then where would we be? I’m glad it wasn’t me. I couldn’t live with that.

Funny how easy it all falls away, how natural that scuttle feels despite all the time and energy I’ve spent fighting it with spray cans and microphones and brothers in arms, not to mention the guns around which my recent battles have revolved. And all for nothing: all to realize with one hundred percent of my brain that I’m the same as everyone I’ve ever hated, and that it only took them ten percent to know who they were from the get-go, and they been getting shitfaced on free drinks and laughter this whole time, watching me chase my shadow.

They called me “The New Face of Hate” in
Newsweek. The
Nation
asked, “Can America Take Macon Detornay Seriously?,” with a cutesy subheadline that read, “Can Macon Detornay?” The
New York Post,
with customary good taste and restraint, screamed “Ivy League Race Traitor” and called me “the city’s most controversial criminal since Bernhard Goetz.” Against my better judgment, I even posed for the cover of
The Village Voice
as “The New Black Leader?” I was hoping someone would call me the white Bigger Thomas, but nobody had the nutsack even though it’s an obvious comparison, what with Bigger being a chauffeur and me a cabbie. I talked a lot more shit than Bigger ever did, though. And I did what I did on purpose. And I got away.

The big question, I guess, is how I got here. Not just on this bus stirring up dust across the Bible Belt, but on this vibe. How I became who I am, or was—the poster boy for an imaginary 1950s propaganda film entitled
Nigra Madness,
the bone-chilling story of how a nice kid from the suburbs got so black and twisted, revolutionary, niggerfied, that he
renounced his race and became ONE
OF THEM!

It’s an impossible question. How did
you
become who
you
are? I’ve scrolled back through my memory as far as it will go, looking for some embryonic moment of divergence, some split from the growth pattern of my genotype, but I can’t find one. It would be nice if there was some simple answer, some creation myth—
when I
was ten I watched
Eyes on the Prize
twelve hours a day for
seventeen straight weeks and I been pro-black ever since,
or
I ate a
special soup made from Eldridge Cleaver’s boiled hypothalamus and
presto change-o,
or
in a secret drum ceremony in Ghana I learned
to channel the spirits of the tribal elders,
or
my daddy was a
trumpet player who toured the Southern chitlin’ circuit back in ’63 and
passed for an albino brother—
but there’s not. My parents are standard-issue white liberals, just as puzzled as anybody. And like I said in damn near every one of those interviews, as far as I’m concerned, the question is not how I got this way, but how the rest of y’all didn’t.