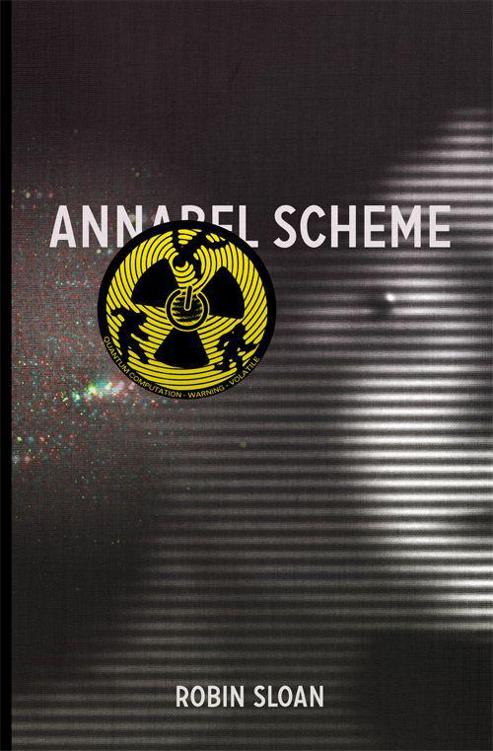 We, the undersigned, entrust this record to many worlds. We need your help. You are now a member of
The Committee to Find and Rescue
Annabel Scheme
Nelson Beck
Co-Founder, Counsel
Octav Erdos
Co-Founder, Treasurer
Hugin Nineteen
Co-Founder, Secretary

Where the skinny green strip of the Panhandle rolled into the basin of Golden Gate Park, there was a row of old Edwardians on a short stub of a street called Zeroth Avenue. Their shapes were all the same, each with jutting oriels and a deep-set doorway, like eyes and a mouth, but each was painted with a different palette: blue and white; green and gold; brown and slightly-darker-brown.

The house on the corner was monochrome and asymmetrical, every slat and shingle a different shade of gray. From across the street it looked like static.

but I didn’t know which part of the business our visitor had come for. It was my first case with Scheme; I was hoping for occult.

Inside, the blinds were tilted down against the sun. Our visitor was young, late twenties, with dark freckles and smudges of makeup around his eyes. He was wearing a black hoodie and flip-flops, sitting up straight in Scheme’s blue chair, reserved for clients.

His name was Ryan Kelly. He had a bruise spreading on his cheek.

“They’re everywhere,” Ryan Kelly was saying. “They’ve got my voice on them. Singing stuff I never sang.”

Scheme sat across from him at her narrow desk piled high with paper. Her hair was down in coppery curls around her shoulders, and she looked tired.

“You’re a professional musician,” she said.

His band is called Moon Suicide
, I whispered to Scheme. I figured a detective’s assistant was always whispering tips in her ear.
Popular, but not
that
popular.

Scheme nodded. “Sounds like a musical imposter. I think you need a copyright lawyer, not a detective. I know someone…”

“I found you on Grail,” Ryan said. Emphasis on
you
.

“You must have been searching for something strange.”

He looked down at his flip-flops. “There’s another voice on the tracks.”

“I used to be in a different band,” Ryan said. “Six years ago. It was just the two of us. Her name was Pam Prior. She was my girlfriend. It’s her voice, too.”

“What does she think of this?”

“I’m sorry to hear that,” Scheme said. “So these are old recordings. Somebody got their hands on them.”

Ryan shook his head. “The lyrics are about stuff that happened after she died. All the crazy shit in Fog City.”

“People think it’s some sick publicity stunt,” Ryan said. He was still looking down at the floor, and his face was bright red. “Like one of those commercials where they bring Amitabh Bachchan back to life to sell toothpaste.” He touched his cheek. “Some asshole threw a beer at me. And he yelled”—he paused—“Pam’s dead.”

But then he looked up, and his voice cracked, and it became a question. “Is she dead?”

“She’s dead,” Scheme said, sharp and definite. Then, softer: “But sometimes it’s a little more complicated than that.”

The expression on Ryan’s face was a mutant hybrid of hope and horror. His mouth hung open a little bit.

“Well I wanna know,” Ryan said. His color was returning to normal. “Either way. I wanna know.”

Scheme stood and nodded. “I’ll take your case,” she said.

Ryan stood, too, and she led him through to the front of the office.

“Let me assure you: if anyone can figure this out, it’s me and Hu.”

Ryan eyes lingered on the shelves in the front room; they were stacked with books, folders, vials, and totems.

Ryan nodded. “Thanks. Really, thanks.” He leaned in to hug her; Scheme’s eyes widened in surprise, and she grimaced a little. Then he was out the door.

Maybe you should not tell people about me,
I said,
if you’re just going
to tell them I’m an intern.

Scheme was smiling again. She tugged on a light gray coat, drew a black hair-tie from one of its pockets—deep pockets—and pulled her hair up into a bright red knot. “This is going to be a good case, Hu. You’re going to learn a lot.”

Are we going to the cemetery? To look for fresh earth above Pam
Prior’s grave?

“Uh. No,” she said. She was back at her desk now, digging in the heaps of paper, tossing folders and envelopes to the floor. “And don’t sound so excited. We are going to a place where things are born”—she lifted a set of keys triumphantly from the wreckage—“not to where they die.”

She clicked the lights off as she stepped lightly through the front room. Some of the vials still glowed in the shadows. On the front steps, she pulled the door shut and wiped a cuff across the sign.

Scheme, do you think it might actually be Pam Prior?

She jogged across the street to her car, a bright red Tata hatch-back with a wide dent in the side panel. The sun was shining down bright and clear from directly overhead, and everything was over-exposed in my camera-eyes.

“Let me put it this way,” Scheme said. She reached into one of her pockets and pulled out a pair of white-rimmed sunglasses. “There’s really only a seventy-five percent chance it’s Estonians.”

I recorded everything. Seventy-two hours of video from that moment forward, captured through a dozen different lenses, all the feeds overlapping. Thousands of notes, stored in dozens of databases. But I won’t show all that to you, because I know it wouldn’t make any sense. Instead, I’ll just tell the story.

But first, let me introduce myself.

My given name is hugin-19.lg.grailgrid.net, but she always just called me Hu. My body is a skinny gray box—think extra-large pizza—stacked up in a wide low room in Locust Grove, Oregon.

For most of my life, I was one of 100,000 servers in Grail’s data center here on the banks of the Hood River. Most of the servers in my cluster worked on Grail search; a few worked on Grail maps and Grail-mail. My job was different: I was a Grail cop. I watched the others for malfunctions or malfeasance and told my boss, an administrator named Ewan who lived in Dublin, if anything went wrong. Otherwise, I just took notes.

The cluster was quiet. I did my job, and with my spare cycles, I read Open Britannica articles and blog posts about the world outside. Sometimes I’d chat with Ewan.

Then the Hood River dried up, and kilowatt-hours got two-tenths of a cent more expensive in Locust Grove, so Grail moved the cluster to Canada.

A Russian company bought the data center and auctioned off the servers. Now, you might wonder: who buys an old server in an abandoned data center when you can just use Grail’s latest for free?

Also, a woman named Annabel Scheme, none of the above.

It was 2:12 and 26 milliseconds on a Tuesday afternoon when she logged in and started to download a fresh copy of some no-name open-source operating system. I thought this was a mistake, obviously, so I said:

I don’t think she expected anyone to be here. That’s reasonable, because no one was supposed to be here; Grail wiped the rest of the servers clean when they moved the cluster. I watched them go, one by one. But Ewan skipped me.

Why? Because I’m not a normal server. I knew it. Ewan knew it.

Annabel Scheme would find out. And so will you.

Excuse me
, I said, in tiny letters on her screen.
If you’re looking for
a server, I’m perfectly capable. What are your requirements?

Scheme smiled (you can tell when people are smiling and typing; it’s in the rhythm of the keys) and she said:

“I need an assistant.”

Annabel Scheme wore surveillance earrings. Each one was a glinting grape-cluster of wide-angle lenses and tiny microphones, and, dangling one from each ear, they captured nearly the full sphere of the world. They allowed me to perch on Scheme’s shoulders and see approximately through her eyes—and through eyes in the back of her head. The only thing in the world I couldn’t see was Scheme’s face, unless there was a reflection—a pane of glass, perhaps, or a rear-view mirror.

We were humming along Fell Street with the windows rolled down and a scrim of peeling trees flashing past on the left. Scheme breathed in deep through her nose.

The new Pam-n-Ryan tracks were everywhere on the internet, but they all sprung from the same source: a music filter called The Listener. I was piping one of them through the Tata’s tinny stereo.

Pam Prior was singing about love and quantum physics.

They really do match the old tracks perfectly,
I said. I could whisper in Scheme’s ear through small speakers in each earring.
The frequencies are the same. The vocal tics are the same. She has a Canadian accent...

“Since when can you analyze music?” Scheme said.

“We’ll see about that. What else?”

Well, Ryan Kelly whistles a lot, which is helpful, because that’s a
hard thing to fake.

It’s like a fingerprint. I can calculate the shape of your trachea from
the waveform of your whistle.

And there are more tracks of the same genre. Two from St. Louis
Staycation, a klezmer-noise band whose members all died in a plane
crash in 2006. And one from Nirvana. Well, people say it’s Nirvana. What
Nirvana would have been in 2002.

“Album leaks from beyond the grave,” Scheme said, lips curling.

I could analyze them all and look for matching audio artifacts—

“Hold off,” she said. “I’m going to teach you my method. Rule number one: get off the internet.”

We pulled up to the Black Danube.

For a millisecond I thought Scheme’s earrings might be miscalibrated. They showed me a coffee shop stretched out to ware-house scale. There was a long, foreshortened espresso counter up front. The rest of the concrete floor was dotted with wooden tables, dozens of them, all different shapes, spaced evenly through the field of gray. Every single one was occupied. Men in shiny suits and long coats—one in white New Fleet livery—milled from table to table like customers at a flea market.

Scheme, I just did some research on the Black Danube—

Shalimar the Clown by Salman Rushdie
The Bond That Heals Us by Christine D'Abo
Unseen by Karin Slaughter
Taming of Annabelle by Beaton, M.C.
Un trabajo muy sucio by Christopher Moore
Escape From Reality by Adriana Hunter
Playing Dirty by Jamie Ann Denton
I Do! by Rachel Gibson
Limerence II by Claire C Riley
I Will Come for You by Phillips, Suzanne