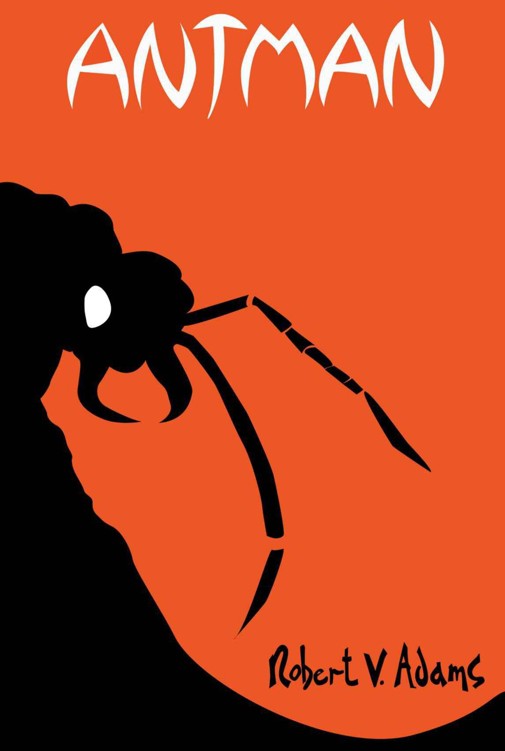 'Antman' is published by Taylor Street Publishing LLC, who can be contacted at:

The book cover illustration is by Millie Hine. The book cover design is by Peril of http://www.perilstudio.co.uk. All rights are reserved.

All characters are fictional, and any resemblance to anyone living or dead is accidental.

'A "supercolony" of the ant Formica yessensis on the Ishikari Coast of Hokkaido was reported to be composed of 306 million workers and 1,080,000 queens living in 45,000 interconnected nests across a territory of 2.7 square kilometres.'

'Ants are waiting to become the next weapon of the serial killer, the terrorist. We can probably say that in the early history of peoples, in the beginning was the fear of attack by plagues, swarms or armies, whether of other people, locusts, cockroaches or ants. Plagues of insects have biblical associations. Armies have a militaristic, almost humanised, image, whereas hordes evoke something huge and out of control. Ants regularly become swarms, armies and hordes and it is hordes which contribute to myths of transformation, throughout the life course. In myth and reality, ant hordes are prominent among the gatekeepers to rituals of life or death. In the face of almost every natural disaster or human agency, including nuclear war, along with termites and cockroaches, their powers of organisation and adaptability make them virtually indestructible. They are apparently immune to nuclear radiation sickness. In contrast with termites and cockroaches, their open-air habits and hardiness mean that in the hands of a criminal with even a modicum of scientific knowledge, they are capable of wielding with equal vigour and deadliness the twin-edged sword of extreme terror and destruction.'

From the night they'd taken his whimpering brother, wearing the little red romper suit, to that place from which he'd never returned, Graver always saw red against the black of darkness as the colour of fear. You could hide the signs of fear behind a curtain of anger, but you could never do away with the feeling itself. It was one more task beyond all the practical problems of every day: how to avoid being swamped by that fear.

He got dressed but not washed, dressed up so he wouldn't be recognised, and prepared to drive to town and go walkabout.

He let the sounds float, now as ever finding their repetition reassuring. They created a song-line independent of the meaning of the words. He hummed them, fitting them to the rhythm of that introduction to the third movement of the Bruckner seventh.

Di-di-dum-dum-dum-dum-dum-dum-dum-dum-dum-duuuuuum. Strong rhythm. Over and over. Most of the time the music obliterated the reverberating tinnitus caused by the movements of the slimy maggots which, like those parasitic flesh-boring insects he'd read about, had crawled in through his ears while he slept and slithered towards the tunnels of his brain. They were microscopic in size and few in number as yet though, and he'd seen and read enough to know they could be lost for twenty years if they explored every route in that maze of the outer brain, before they came upon his queen.

On the other hand, they could find her in a single year, or less. He couldn't take the chance. He had to act now.

Graver experienced one of those moods of great lucidity. He found himself outside the central branch of the library in town. He walked casually in. Between five and six there were plenty of empty chairs at the tables in the reading area. He went straight to the shelves he invariably visited and took down the reference work on the social insects. He flicked the well-thumbed pages to a passage he knew almost off by heart and read: 'The collective power of the ant should not be underestimated. The African colonies of the driver ants of the genus Dorylus can contain more than twenty million ants. These are different from South American army ants in that they tend to have a much more permanent base nest, excavated to a depth of up to four metres, from which they carry out raids on an almost daily basis. Raiding swarms of these ants can devour with frightening rapidity any prey which for one reason or another is unable to move out of their path. There are accounts of tethered horses being reduced to skeletons within hours.'

Graver was not entirely sure when he became the executioner.

‘
It was probably when the urge to conduct the performances became realisable. You rehearse some things in your head so many times that when they happen you hardly notice the slide from thought to action. I daydreamed a good deal about the past. I had wanted for some time to reach into my past and tell people – especially Marg from down the road, a couple of hundred miles away, who, when I was a child, leaned over me and patted my head with “what a nice boy” – that they were utterly mistaken. After a while, because the appearance of niceness couldn't exist indefinitely on top of the nastiness, it wouldn't matter one way or the other. Yet (this is the bit that messes you up) I wanted both of them. When I had one I wanted the other. And vice versa. You can only do this by splitting your mind in two or three or four, or any number you care to imagine.

‘
I put the trouble down to being in the Homes. At primary school the Homes children were picked out by everyone. At register on Monday mornings, Miss Clock – we called her this; I can't remember her real name but recall the sentence which carried her through most days: “I'll clock you if you don't stop that.” – used to call out “Homes children to the front”. We all filed out and stood in a line facing the rest of the class, while she collected the dinner money from everyone else. It went on from there, all day, every school day, every week of term, the picking out of the Homes children.

‘
I could cope with the attempts to bully me at school, since in any case the Homes children stuck together at school and this made other pupils sufficiently hesitant about attacking us to ward off the worst intimidation or violence. But the real threats came from within the Homes. School was a minor dread, compared to the fear which yawned in the pit of my stomach as I walked back from school every afternoon. And it wasn't all the children by any means.

‘
As a consequence of what happened to me in the Homes, the main target of my anger was that dried up, crackleskin, leather-faced prune of a reverend mother whom I hated as anything but reverend and as the antithesis of the mother I couldn't have, as neither could most of the other children in the orphanage. But after it happened, I was stricken with guilt about those thoughts, as though I'd actually done it.'

Graver scraped his gnawed forefinger over the pages till he reached a later chapter of the book. The page was well-thumbed. He almost knew it by heart. “Ants are the inheritors of the earth. They survive in conditions which would defeat most other living organisms. They can survive in heavily polluted environments. Species such as the common red ants and black ants on many British lawns, Myrmica Ruginodis and Acanthomyops Niger, actually seem able to activate micro-organisms which reduce the level of nitrate concentrations in the atmosphere. Ants seem virtually unaffected by radiation. Along with a small number of other insects they would probably survive a nuclear war.” He experienced a tremor in the lower abdomen as he read the words, his lips mouthing key phrases. He wouldn't have known it as such, but he was near orgasm, as near as when the ants were carrying out his gruesome wishes.

Graver turned back to the beginning of the book. He read passages from the introductory chapter, skipping to pages he'd marked with Stick-its, revisiting particularly familiar paragraphs:

“
There are somewhere over 8,700 species of ants in the world and once the entire planet has been explored this total may rise to 10,000. Ants are found almost everywhere, from Alaska to the Equator, with the exception of a few remote Pacific islands and the ice-covered continents around the North and South Poles.

“
Ants, along with spiders, cockroaches and centipedes, are the stuff of nightmares. They are the crawling beings which while we sleep inhabit our dreaming brains, clogging them with fears and fantasies, reducing our daytime confidence to palpitating night time fears under the bedclothes.

“
When you sit on the lawn with your bare feet in sandals, six legs which make your flesh creep make their way from slivers of grass bent over the lip of your sandal onto the naked bulb of your ankle, up through the fine hairs of your calf, behind your knee, before injecting venom through the softer skin in response to your hand reaching down to scratch the itch.”

Graver rose suddenly from the table, looking up as though someone had called him. Leaving the open book on the table, he walked rapidly from the building. He was talking to himself, using two quite distinct voices.

The Wanting by Michael Lavigne
The Rescued by Marta Perry
Invasion by B.N. Crandell
Forget Me Not by Sue Lawson
Happenstance by Jamie McGuire
Airplane Rides by Jake Alexander
A Mistletoe Affair by Farrah Rochon
CupidRocks by Francesca Hawley
The Pagan Lord by Bernard Cornwell
Fly With Me by Chanel Cleeton