Read Anything for Him Online 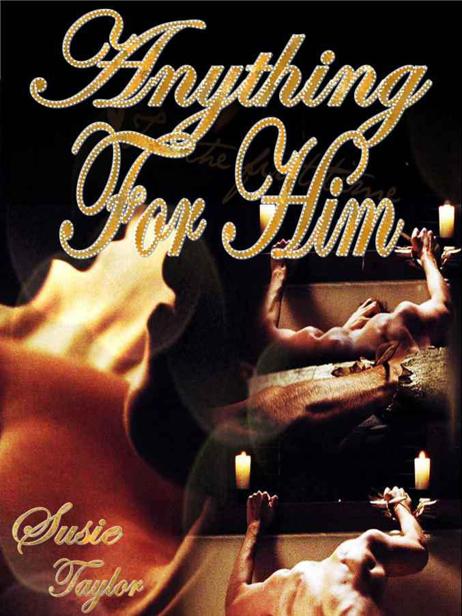 Thanks for your Support!!!!!

Anything for Him – Part 1

Anything for Him – Part 2

Anything for Him – TT’s Diary

Anything for Him – Part 1

Late on a Saturday morning, she pulled up to the house after driving a half-mile deep into an old growth forest. As soon as she turned up the bumpy gravel road under a canopy of very tall trees her nervousness disappeared and it was instantly replaced by a sense of calm, euphoria and eager anticipation for the wild and wicked sex she had dreamed about for many years.

She had always been the good little girl. Got A’s in high school, was a cheerleader, and lettered in basketball and track. Actually she was the leading scorer for the basketball team and placed in the top 10 in the state in the marathon.

She had a firm lean body that was quite flexible–as a matter of fact, he told her to keep stretching her body until she could lick her own clit–that was the key she had to show him that allowed her to enter The Wicked Woods. She accomplished this wonderfully self - serving feat within the first two weeks, but he made her wait until she could do it long enough to get herself off. She emailed him on Tuesday after she had accomplished this three times out of three attempts in the morning while thinking of what her great reward would be for this special favor that she learned to do for him.

He had called her for the first time on Friday afternoon after she got back to the apartment she shared with two other 19 - year - old female college students. Her knees nearly buckled when she heard his smooth firm rich hypnotic voice speak her name for the first time.

Not her real name, but the name that he gave her early on in their email exchanges–”TT”, for her tiny tits. She told him; in high school she didn’t need to wear a bra, but did anyway hoping to get her body to get the hint. Her main rival, also a cheerleader, gave her that name in the showers after the first football game of her sophomore year.

As she continued up the drive in her ’65 convertible mustang, she cupped her left breast in her left hand. Heredity paid off in the end for now she had conical extremely firm 36 C breasts and her nipples were pressing hard against the skimpy half tee shirt he told her to wear. Desperately she hoped they would be big enough to please him even though she knew that he would call her TT to humiliate her and get her soaking wet at the same time.

She parked where he had told her and she looked at her watch and it was just one minute past noon, her scheduled arrival time. Actually she had been a half hour early and just kept driving around until she just couldn’t wait any longer. She had unlocked the heavy gate using the combination he had told her and then once through locked the gate behind her. This scared her a little, but she also knew they would want complete privacy to do all the things they had written about in emails.

She found it hard walking in the high-heeled boots he told her to get and she was having a hard time keeping her skimpy leather skirt from riding up her bare ass. What a naughty little Slut she felt like. Getting ready to let a man she had never met, a man older than her father, a man she had long dreamed about, do just about anything he wanted to do to her.

“TT’s” pussy was so wet she could feel her juices running down the soft insides of her thighs. Should she clean herself up for him or would he like to know what kind of effect he has on his hot little slut. The juices were down to the tops of her fishnet thigh highs and her knees wobbled and her hands shook by the time she knocked on the door.

“Master, Sir, Tiny Tits is here to serve you,” with that said she pulled off her half tee shirt and put it on the doorstep. She kneeled at his feet, he was so tall and so sexy, but she knew what he had told her to do once she introduced herself to him and she had better get started.

She very nervously and gently reached inside his shorts and felt his hairy balls and flaccid cock which she put fully into her mouth and then held still just as she had been instructed. He motioned for her to grab her butt checks with her hands and to give them a long hard squeeze.

He wrapped his fingers and finally his hands in her long curly bottled blond hair and started moving her head up and down on his cock. His cock grew big and then even bigger in her mouth as he fucked her before saying the first word to her.

After a long time, he withdrew his cock from her mouth and she knew that she had to lick his balls clean next. His balls were licked from top to bottom, right to left, left to right and bottom to top, over and over again. She was so wet now that she could not help smelling her own juices as a small puddle was starting to form between her knees.

Abruptly, he pulled her head out from his crotch, pushed her down to the patio and said his first words to her in person, “Alright, you fucking little Slut hole, show me the key and make it good.” She rolled herself into a ball with arms and legs intertwined as her cheeks became streaked with her now cold pussy juices.

Her tongue touched her swollen eager clit and she felt a heat rush boil up and spread throughout her body. He grabbed her by her thighs and rolled her up so her cunt was staring up at the glorious blue sky and bright fall sun. “Lick that clit, Slut; you know that is the key to get you into The Wicked Woods.” She came hard when she heard him speak to her and then she came again. She knew she could not stop licking her clit until he told her and she loved the feeling and most definitely enjoyed pleasing her new Master.

He leaves her lying there on the patio, whipped and unable to move. He returns later with two glasses of champagne and pours some into her mouth after pulling her up into a sitting position. She reaches for the glass and he slaps her hand, “No, I am your Master, I decide when you drink. Remember, you are just a lowly slut trainee.”

He wrapped his arms around her long lanky body, picked her up and carried her inside the house of The Wicked Woods. He carried her first to the couch where he pinned her on her back and first had a taste of TT’s not so tiny tits. Next he filled her face with his cock and balls as he slapped and pinched her tits.

He asked her to shake her head yes or no to any to questions he might ask, she was not to speak unless he gave her permission first. Her tits were so soft, firm and round and her nipples so hard and tasty that he just had to fuck them. He knew she had never had her tits fucked and always dreamed about having big fuckable tits like her two roommates. She got to lick some precum off of her nipples and the tip of his cock. Oh how she wished her high school cheerleading squad was there to watch this–TT getting her tits fucked for the first time at age 19.

He played with her, fucked her, spanked her, tickled her, tied her up, tied her down, bit her, nibbled her, slapped her, pulled her hair, and did everything he wanted to her for a day and a half.

He did her downstairs, upstairs, on the stairs and bent over the upstairs railing. He had her indoors, and outdoors, tied to trees and tied to the bumper of her car. He gave her outfits to wear, some that he tore off of her hot trembling body before ravaging her and others he gently removed in a most seductive way.

He always kept her guessing. She never knew what was going to happen next, a soft kiss on her lips or nipples or a hard smack on the ass. She loved his mind, his imagination, his way with her, his wonderful voice, and his awesome cock that had given her more orgasms in a day and a half than she had altogether in the 4 - ½ years that she had been sexually active.

Late on Sunday afternoon, He walked her to her car. She was dressed in a simple all white dress with nothing on underneath. She did not want to leave, but she knew He was right that she had to get ready for classes the next morning. She wanted nothing more than to give herself to this beautiful caring and most Dominant Man; to give her body to him to fuck over and over again; to let him do the most intimate and sometimes most humiliating things to her; to give Him whatever He wanted.

He gave her a long very deep wet kiss and told her he was going to give her a present as she had been an been better slut than he expected. What is it she wondered? She found out soon. He had her is the passenger seat of her convertible with the seat back as far back and down as it would go. He stood over her and told her to pull down his shorts and lick his balls and cocks clean and that was to be her present.