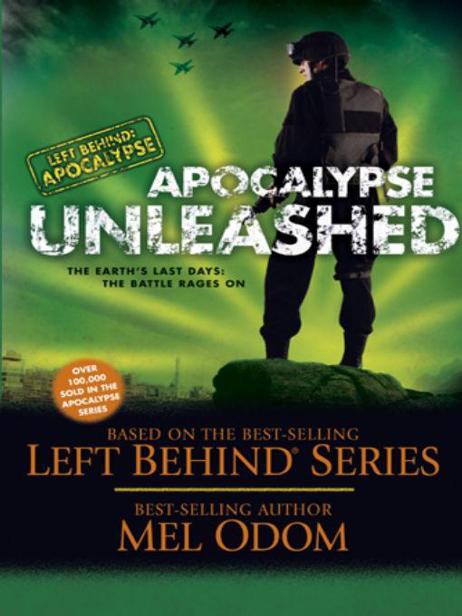 What People Are Saying
about the Left Behind Series

“This is the most successful Christian-fiction series ever.”

“Tim LaHaye and Jerry B. Jenkins … are doing for Christian fiction what John Grisham did for courtroom thrillers.”

“The authors’ style continues to be thoroughly captivating and keeps the reader glued to the book, wondering what will happen next. And it leaves the reader hungry for more.”

“Christian thriller. Prophecy-based fiction. Juiced-up morality tale. Call it what you like, the Left Behind series … now has a label its creators could never have predicted: blockbuster success.”

Tyndale House products by
Tim LaHaye and Jerry B. Jenkins

Other Left Behind
®
products

Left Behind
®
: The Kids

Other Tyndale House books by
Tim LaHaye and Jerry B. Jenkins

Perhaps Today
Are We Living in the End Times?

Designed by Mark A. Lane II

Goose drove his boot through the frail wooden door of the burning house. The door ripped free of its hinges with a loud screech that nearly drowned out the noise of the flames greedily consuming the structure. With an arm wrapped around his face to protect it from the questing, twisting flames, he dashed through the doorway.

Inside the small room, he looked for the people he was certain he’d seen through the window during his approach. Smoke blurred his vision and stung his eyes.

He pulled his assault rifle to his shoulder immediately and assumed a profile position that streamlined his body to make a smaller target. He’d been carrying the weapon for so many years the M-4A1 felt like a part of him.

“I’m First Sergeant Gander of the United States Army Rangers,” he said in his command voice, stern and direct. “I’m here to get you out.”

Two teenagers hunkered down beside a patchwork chair that was probably a castoff from a hotel in Sanliurfa. They stared at Goose. The older one, a girl of maybe sixteen, held a hand over her mouth and nose and the other hand over her younger sister’s.

Goose lowered his weapon. “It’s all right.” Smoke burned his sinus passages and made his throat raw. “You need to get out of here. Do you speak English?”

The girls just looked at him with fear-filled eyes.

A pool of flame suddenly rushed across the ceiling like an incoming tide. The surface burned black in seconds and chunks fell. The fire breathed in cracks and whooshes as it claimed new territory.

Goose stepped toward the girls.

The older one wrapped the younger one protectively and pulled her back. They coughed and hacked as the smoke threatened to overcome them.

Holding a hand out, Goose said, “Please come with me.” He wished he had the words to make them understand. Since he’d been stationed as part of a United Nations peacekeeping effort along the Turkish-Syrian border, he hadn’t learned more than a few words of Turkish. Making matters more problematic, the area also contained several Arabic and Kurdish languages and dialects. The villages and towns were often melting pots for several cultures. He had no idea what language the girls spoke.

At the other end of the room, a timber sagged with a loud crack. A large section of the roof pulled free and dropped to the floor.

The girls screamed and held each other.

“Please,” Goose said as he continued to hold out his hand. “Please.” The heat boiled all around him and the air thickened with smoke. He coughed.

The younger girl looked at the older one and spoke rapidly. She pointed meaningfully at Goose.

Goose knew he wasn’t at his best. He was dressed in sweat-and dirt-stained khaki BDUs, and he was armed with the assault rifle and a Beretta M9 pistol. A bandolier of extra rifle magazines crossed his Kevlar jacket. He hadn’t shaved or rested well in days. He knew that, at the moment, he didn’t look like the kind of guy anyone should trust.

“United States Army,” Goose said. “United Nations. Good guy.” Those words had served him in tours of duty in several foreign countries. A lot of people who didn’t understand English at least understood those words.

“Good guy,” the younger girl said hopefully and turned to the older one. “Good guy.”

The older girl shook her head vehemently. She spoke rapidly, but the smoke choked her out. When the younger girl tried to get up, the older girl wrapped her arms around her and pulled her back.

“Please,” Goose said again, “you’ve got to come with me.”

The younger girl fought off the older one and struggled to get up. A coughing jag took her strength away and almost knocked her off her feet.

Goose put a hand on the girl’s shoulder and steadied her. When he glanced back at the door, he saw that flames had spanned the opening. Embers spiraled up into the night sky. He could faintly see other soldiers from his squad running from house to house, getting people out.

Goose squatted down to her level so he wouldn’t seem so threatening. “I’m going to get you out of here. Okay?” He nodded, wanting to establish some kind of communication bedrock.

The girl nodded back. Tears coursed down her cheeks.

Goose slung the M-4A1 across his back and reached for the older girl with his other hand. “C’mon. You’ve got to get out of here. Good guy. Good guy.”

Another section of ceiling, closer this time, crashed to the floor. The older girl became a believer then. Whether she believed in the soldier in front of her or the fact that she was going to die if she stayed in the house, Goose didn’t know. In the end, it didn’t matter. He took her hand in his and pulled her to her feet.