Read Appleby and the Ospreys Online

Appleby and the Ospreys 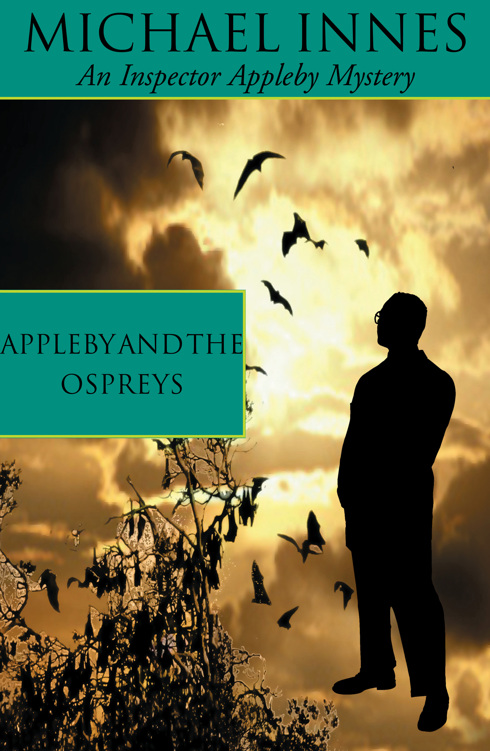 After a short interlude travelling with AJP Taylor in Austria, he embarked on an edition of
Florio’s
translation of
Montaigne’s Essays
and also took up a post teaching English at Leeds University.

By 1935 he was married, Professor of English at the University of Adelaide in Australia, and had completed his first detective novel,
Death at the President’s Lodging
. This was an immediate success and part of a long running series centred on his character Inspector Appleby. A second novel, Hamlet Revenge, soon followed and overall he managed over fifty under the Innes banner during his career.

After returning to the UK in 1946 he took up a post with Queen’s University, Belfast before finally settling as Tutor in English at Christ Church, Oxford. His writing continued and he published a series of novels under his own name, along with short stories and some major academic contributions, including a major section on modern writers for the
Oxford History of English Literature
.

It was a mannerism of Lord Osprey’s to be thus emphatic in his speech. One almost saw words and phrases in italic type as one listened to him. John Appleby, who along with his wife had just sat through a rather large luncheon-party given by the Ospreys, recalled how, one evening not long before, he had idly flicked a switch on a television set, and as a consequence found himself listening to his present host delivering a speech in the House of Lords. Not a maiden speech, or none of the scattering of peers present would have been so discourteous as to go to sleep. As it was, they had suffered Osprey through numerous sessions, and knew their man. So not only were some of them genuinely slumbering; here and there one of them – man or woman – was feigning slumber in the interest of providing more quiet fun for the BBC’s cameras. It is proverbial that an Englishman loves a lord, and a gaggle of lords or ladies sleeping their way through parliamentary debates is probably more lovable still. Not – Appleby told himself – that they overdo the quaintness attaching to their labours as legislators. Only the Lord Chancellor on his woolsack is habitually addicted to fancy dress. And the woolsack itself – according to the high theory of the thing – is not inside but just outside their lordships’ Chamber.

‘Or for that matter,’ said Lord Osprey,
‘consult
Sir John.’

This was slightly awkward, since Appleby had failed to follow whatever topic the Ospreys were at issue over.

‘I’m afraid,’ Judith Appleby said, ‘that my husband has withdrawn his attention and is thinking about Tom Thumb.’

This ought to have gone down well with Lord Osprey, since it was from an eminent statesman, Charles James Fox, while discoursing on Catiline’s Conspiracy, that Dr Johnson had licensed his mind to wander to such odd effect. But Lord Osprey, who had certainly never heard of Catiline’s Conspiracy, and hardly of Samuel Johnson either, was merely perplexed, so that a moment’s silence succeeded.

‘I would be so grateful for advice,’ Lady Osprey then said unconvincingly. ‘Bats in the belfry! And people being disturbed by it.’

‘Yes, indeed,’ Appleby said. ‘One can only sympathize.’ This was a reasonable shot in the dark. Perhaps Lady Osprey had been confiding to the company in the matter of some relative undeniably off his head.

‘And you feel,’ Judith asked quickly, ‘a particular responsibility? As leading parishioners, that is to say.’

Appleby glanced at his wife in some alarm. Judith’s sense of humour occasionally took a slightly malicious turn. And, after all, parishes do have leading parishioners. Particularly in the countryside. It can be made to sound comical, but is one of the facts of English rural life.

‘Just so,’ Lady Osprey said. ‘And, indeed, a little more than simply that. Oliver, you see,’ – Oliver was Lord Osprey’s Christian name – ‘is the vicar’s churchwarden. And a very delightful old village shopkeeper is the incumbent’s.’ Lady Osprey paused on this, as if to mark its robustly democratic ring. ‘So Oliver, and to some extent I myself, have a responsibility to give a lead in the matter. And, of course, Mr Brackley too. Mr Brackley is the incumbent. One couldn’t have a more delightful parson than Mr Brackley. But he is sometimes a little slow when a decision has to be taken.’

‘I think Brackley is quite right not to bother his head over anything so rubbishing.’

This came from a darkly frowning young man understood by Appleby to be the Ospreys’ only son, the Honourable Adrian Osprey. (The Ospreys, although they had been barons through several centuries, had never contrived to yank themselves into an earldom – so Adrian, during his father’s lifetime, was just a mere Hon. It was possible to wonder whether Adrian Osprey, whose temperament seemed to be distinctly saturnine, contrived to manufacture a grievance out of this lowly status.)

‘So the matter of the bats in the belfry is a little hanging fire?’ Appleby asked. He was now tolerably assured that the bats were actual bats, and not metaphorical ones in the head of some other difficult relative. ‘The bats up there have become really troublesome?’

‘It seems so,’ Lady Osprey said. ‘I am myself quite fond of bats in their proper place. We have them in the park, you know; and they have perfectly adequate roosting areas – if that’s the proper term – in a disused barn at the home farm. In the dusk they come quite near to us here, and they particularly like the moat.’ Lady Osprey paused on this, and it was clear that she conscientiously took satisfaction in the Ospreys’ having such a mediaeval appurtenance to their dwelling. ‘The moat has some quite deep pools in places, but in others it is simply rather soggy – and no doubt breeds the midges and things the bats feed on. Everything in its place, I say, and I don’t even object to picnickers in the park if they keep their distance. But I feel that bats are not quite in their right place in churches. And in our church the creatures appear to wake up at the wrong time, and come down so that they frighten the village children in the choir. And the children are the choir. I don’t know why it is – but there are now no grown-ups left in it.’

These rambling remarks failing to elicit comment from the guests at large, Lord Osprey had to take up the tale.

‘At first it seemed simple enough,’ he said. ‘
Bat
the belfry bats. Go after them as if they were so many deathwatch beetles. But then some confounded woman came and upset Brackley. Well-connected and so on, and from the Cruelty to Animals. I subscribe to them, as a matter of fact. So you might think they would leave us alone. But not a bit of it. Bats, it seems, are a threatened species. Like badgers and foxes. It seems there would be no foxes left, if one didn’t have hunts to go chasing and hallooing after them. I have to subscribe there too, you know, even although I don’t at all regard myself as a landowner. A dozen farms to keep an eye on, of course. But you have to go back a good many generations to find any Ospreys as landed proprietors in a big way.’

Nobody in the small group of guests who had lingered to a civil three o’clock found any remark with which to follow up this genealogical information, so Judith Appleby returned firmly to the bats.

‘There is a great deal of misconception about bats,’ she said. ‘Hardly anyone knows, for example, that they make excellent pets. Those village children ought to be told about that. A bat in a good home responds quickly to affection. And it doesn’t need to be fed from expensive tins.’

‘Very true,’ an elderly woman called Miss Minnychip said. ‘If the children ceased to be scared of them, the bats as they drop down at matins might join in the Benedicite. “O all ye Fowls of the Air, bless ye the Lord: praise him and magnify him for ever.” Ananias, Azarias, and Misael oughtn’t to be left to do all the work.’ Miss Minnychip reflected for a moment. ‘And more simply,’ she then added, ‘recall that blessed are they that dwell in Thy house. The psalm explicitly mentions sparrows and swallows, but it says nothing about excluding bats.’