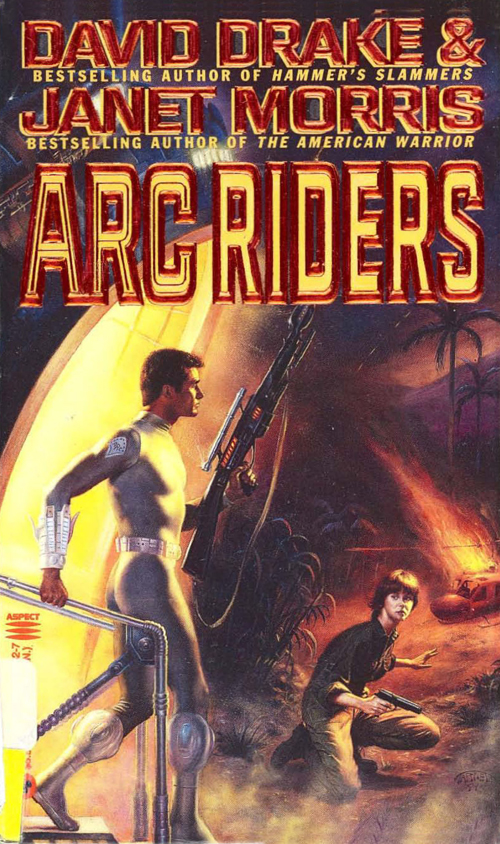 The first rocket over the berm awakened Major Rebecca Carnes. Six more landed with their terrible
whoop
WHAM! in the midst of the firebase before she managed to roll out of the cot.

The smell of flesh dead so long it was liquescent mingled chokingly with explosive residues.

A great explosion shocked the night orange. A flying object hit Carnes and flattened her against a half-collapsed sandbag
wall. It was a human leg. The sight had the unexpected effect of steadying her.

Suddenly blue light and a sound like frying bacon enveloped Carnes. Outside the aura, all noise and motion stopped. An oval
bubble formed before her. Tracer bullets hung in midflight.

The bubble split vertically. A man stepped out. “Major Carnes? We have a proposition for you.”

Aspect is a trademark of Warner Books, Inc.

To Doctor John Miesel.
It’s always handy to have a biochemist around.

“C
ome on, Roebeck, I don’t need a load of grief after an operation like this was,” Jalouse growled.

Jalouse’s displacement suit had a panoramic display, so he didn’t have to turn to see his five teammates in the capsule. Still,
the sight of his armored figure swinging slowly around, displaying the battle damage, was a useful reminder of how rough a
time he’d had—and how little he was asking.

“Oh, let him go,” said Tim Grainger. Chun Quo pursed her lips and stared at her personal display, pretending that she didn’t
have an opinion.

“Come on,” Jalouse repeated. “I’ll be down in Debrief in ten minutes. Unloading me in the control room instead of the docking
bay won’t hurt anything.”

The shimmering ambiance of plasma discharges and auroras had faded from TC 779’s screens, leaving only the bare plates and
girders of the dock. The bay door was a touch-sensitive unit, accepting a high leakage rate in order to speed operations.
The black-and-yellow chevrons on the leaves had been scuffed almost entirely away by equipment entering ARC Central. The personnel
airlock directly into the transfer control room was almost never used.

“Transfer Control to Capsule Seven-Seven-Niner,” said a bored voice that Jalouse heard both through his helmet earphones and
over his suit’s audio pick-up from the speaker in TC 779’s cabin. “You’re cleared to Berth Seven. How do you intend to proceed?
Over.”

“Hold one, Control,” Roebeck said, grimacing as she reached for the airlock switch. “Go on, then, Jalouse. But I don’t know
why she can’t meet you in Debrief like anybody else.”

The inner hatch cycled open. Jalouse entered the lock. “Thanks, Nan,” he said.

“Because he’s afraid his wife’ll be in Debrief, too.” Pauli Weigand chuckled from his seat opposite the hatch. “We’ve had
enough excitement on this operation already.”

The inner lock closed. The outer membrane opened and Jalouse stepped onto the slotted emergency walkway. ARC Central was insulated
from the world around it by hard vacuum.

A derrick slid into position above the capsule, in case Roebeck wanted to hand control over to the mechanical transporter.
The operator could see that somebody’d gotten out of TC 779 here, against regulations; but the ground crews didn’t make trouble
for ARC Riders—and anyway, Sonia herself was the supervisor on this shift.

“Transfer Control to Seven-Seven-Niner,” said the voice, which Jalouse now heard only through his earphones. “Do you have
a problem?”

Jalouse stepped into Central’s lock. The hatch closed behind him. He felt the clang through his boot soles, and the strip-lights
on the paneling above quivered at his armored weight. Somebody else in a displacement suit was coming along the walkway from
the other direction.

“Jalouse?” Weigand called over the team’s intercom. “Bet you can’t get out of your suit in ten minutes, much less into hers.”

“Wise ass!” Jalouse muttered as pressure built in the airlock. Hell, they’d never been in love. Grimacing, Jalouse poked the
switch to open the inner door and raised his faceshield as he stepped into ARC Central.

Sonia wasn’t waiting on the other side of the airlock.

Neither was anything Jalouse had ever seen in his life.

Instead of the worn paint and control panels of Transfer Control Room Two, this chamber was hung with silk brocade. From the
ceiling beamed the face of an Oriental whom Jalouse didn’t recognize in the instant he had to give to the decor.

A dozen people in one-piece taupe coveralls sat stiffly at desks. For an instant, they gaped in amazement as great as that
of Jalouse himself. Machine pistols were slung from their straight-backed chairs.

“Invasion!” screamed the translation program in Jalouse’s suit as the strangers gabbled in some language that sure-hell wasn’t
Standard. “Invasion! Kill him!”

Jalouse pressed the switch of the airlock behind him. It didn’t open. One of the strangers fired point-blank into the ARC
Rider’s chest.

Bullets ricocheted in all directions. Jalouse stumbled sideways, over a desk, and fell. He pointed the weapon he carried slung,
but it was a plasma discharger. If he fired it here without his faceshield clamped, the hostiles elsewhere in ARC Central
wouldn’t have to do anything but sweep up his ashes.

Short, screaming people in coveralls leaped to their feet to get a better shot at the invader. One of them spun and fell,
his face torn by a kcyholing ricochet. The slamming, sparking impacts bruised Jalouse even though they hadn’t yet penetrated
his armor.

During the operation, Jalouse had used the pair of acoustic grenades that should have hung from his equipment belt. Fifty-fifty
the detonation wave would have pulled his head off anyway when it inevitably lifted his helmet.

N
an Roebeck tilted her scat as the transportation capsule shuddered and clucked. The electronics were aligning themselves in
the limbo that was neither
when
nor
where
, preparing to displace again.

Roebeck could have saved an apparent ninety seconds by maneuvering the capsule in the sidereal universe to its berth. With
the amount of traffic around ARC Central, though, it was both simpler and safer to let the software displace the vehicle…
and anyway, Roebeck didn’t feel like doing any unnecessary work right now.

The operation had been a bitch. Central’s preinsertion intelligence had a gap in it that could have gotten somebody killed.
Would have gotten Dor Jalouse killed, except Chun Quo had noticed the anomaly in the hostiles’ wake, and Tim Grainger was
a fast triggerman even by the standards of the ARC Riders. Grainger pulsed the
second
hostile vehicle, frying the circuitry of the coil gun maybe a half second before penetrators would have chewed the rest of
the way through Jalouse’s suit.

Roebeck turned her head slightly as she stretched. Weigand and Chun were chatting, while Barthuli was already reviewing clips
of the raw data the team’s sensors had gathered during the operation. That left Grainger to himself, as usual. Quiet, composed;
not obviously uncomfortable, but still looking like a well-mannered goat that had wandered into a luxury apartment.

Tim Grainger had been born at the beginning of the 21st century. The rest of the team, Jalouse included, was from the 26th,
where ARC Central was parked in a huge vacuum chamber isolated from the rest of the Earth except via temporal displacement.

In a manner of speaking, all the ARC Riders were displacees. The teams used technology from far up the line—how far, most
Riders didn’t want to guess—to operate outside of their own periods. The fact remained that Grainger was an outsider even
to the general outgroup.

“Got anything planned for your downtime, Tim?” Roebeck asked. She was team leader, so it was her duty to make her personnel
comfortable.

At the corner of Roebeck’s mind was the awareness that, because of her position, she was as much alone as Grainger. Roebeck’s
comfort was somebody else’s duty, she supposed, though they were making a piss-poor job of it.

“My orange tree ought to be ready to flower,” Grainger said. His smile suggested that he knew what Roebeck was trying to do—and
appreciated it. “If it’s going to, that—”

The capsule slid into normal spacetime. The alarms went off.

The display across the forward bulkhead was set to show the hangar in which the capsule was settling. That remained as the
background, but the color was washed out to highlight the emergency dump from Jalouse’s suit in the center of the image. A
red strobe lit the cabin, and Roebeck’s four team members muttered exclamations as they lunged for weapons and gear.

On the display, a woman screaming “Death to the intruder!” jumped onto a desk. She fired a machine pistol point-blank at the
sensors on Jalouse’s helmet. The projected image fuzzed and speckled as Jalouse toppled backward.