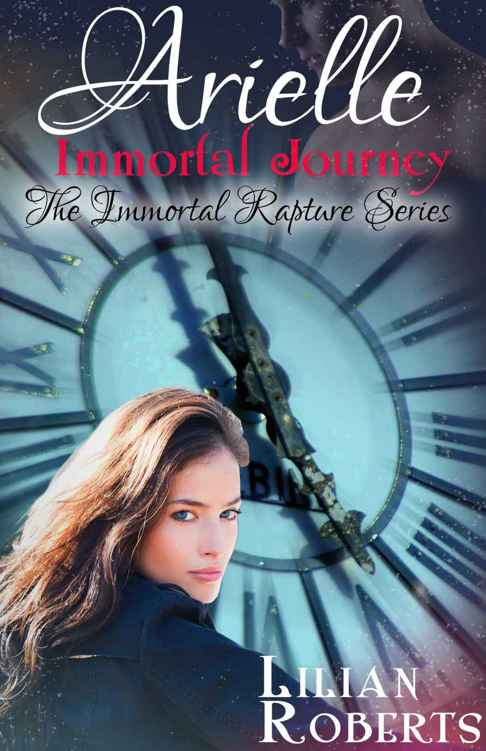 This work is licensed under a Creative Commons Attribution-Noncommercial-No Derivative Works 3.0 Unported License
.

Attribution
— You must attribute the work in the manner specified by the author or licensor (but not in any way that suggests that they endorse you or your use of the work).

Noncommercial
— You may not use this work for commercial purposes.

No Derivative Works
— You may not alter, transform, or build upon this work.

should be directed to:
[email protected]

This is a work of fiction. Names, characters, places, brands, media, and incidents are either the product of the author's imagination or are used fictitiously. Any resemblance to similarly named places or to persons living or deceased is unintentional.

There are a few people I would like to thank for their help with the fifth book in the Immortal Rapture series.

Thanks to my so-incredible husband, for encouraging me to continue on, and who has never complained about the long hours I have spent in front of the computer, working on this series.

To Jacy Mackin, my amazing editor, for guiding me through the challenging parts of the manuscript.

Thank you to my Booktrope proofreader Lydia Johnson and cover designer Shari Ryan.

To Christy, my beautiful daughter, for her overall support, and
unconditional love.

To Jiolanda, my lovely niece, who has never stopped believing in
me, and in my ideas.

To Kat Sheridan, for taking a manuscript of more than 75,000 words, and crafting a brief synopsis that would give readers a vivid peek into the story.

And finally, sincere thanks to all my friends who enthusiastically supported me, and to my fans for the surreal feedback and great reviews.

Thank you for your moral support and love. I’m forever grateful that you’re part of my life. I love you!

FOUR DAYS PASSED
without incident following the revelations
about the Veneti society, Professor Allworth, and the origin of
Arielle's magic amulet. Sebastian and Troy went to the office every morning and returned home around two in the afternoon. Sebastian and Arielle fell into a routine. In the afternoons, Sebastian would spend time reading the paper or watching the telly while Arielle did her homework. Later, they would take long walks on the beach and talk about their plans for the future. When they arrived home, Sebastian would sit with her while she ate her dinner, and they would discuss news about school and their friends. Sometimes, she would chitchat
nonstop, making Sebastian laugh out loud. It was later in the
evenings
that he would get on the phone with Troy and the conversations
would turn serious.

They would use that strange immortal talk that made it
impossible for humans to understand their discussions. However, she would notice his facial expressions shifting as their dialogues progressed. She wondered what was so upsetting for Sebastian, but she didn’t want to ask.

She thought that it was amazing that as soon as he would hang up, his whole demeanor would change. Arielle would again become the center of his attention. He would take her to bed and make her writhe in his arms, causing her to forget any thoughts or concerns she might have had.

One afternoon they decided to go horseback riding. It was a cool, clear day, and they rode in silence. Arielle’s thoughts swirled around Sebastian while her eyes enjoyed the scenery.

She realized that she had never visited Sebastian’s office, but in
her mind she had created an image of this enormous building
located
in the middle of London. She was completely intrigued about
Sebastian’s business. She wondered what his secretary looked like, what kind of people worked for him, and what did he do when he was there. One
of these days she was going to surprise him with an unexpected
visit.
She gave an imperceptible shake of her head and smiled inwardly as
she thought of how surprised he would be when she entered his office unannounced.

She looked over at Sebastian. He was watching her carefully, his gaze locked on hers, eyes inviting to speak her mind.

“What are you thinking?” he asked curiously.

She snorted. “About you, of course, do I ever think about
anything else?”

“I’m happy to hear that. But you look perplexed, so what are
you
really thinking about?” he asked again, a light smile touching his
lips.

“Oh…” her voice trailed. There was a long pause. “I was
thinking about the telephone calls you have been making to Troy for the past
three nights,” she said, and gave him a direct look. Sebastian
narrowed his eyes at her.

“What about the calls?” he asked, surprised.

Arielle cleared her throat. “Sebastian, you look agitated during those discussions. I do hope that everything at work is going well,” she said, keeping her expression as calm as possible.

Sebastian moved his horse closer to hers, met her gaze, and held
it. “Arielle, why do you feel that you can’t ask me about something
that’s bothering you? Have I ever given you a reason to think that you can’t?” He smiled gently.

“No, you haven’t, but I don’t like to intrude in your private affairs,” she said, returning his smile.

“You’re going to be my wife. I don’t keep private affairs from
you,” he said, his voice low and velvety soft. He studied her face carefully while waiting for her reply.

She drew in a breath. “Okay then, what’s going on at work that has you so worried?”

Sebastian’s brows furrowed. He paused for a short moment.
Arielle flicked him a quizzical glance.

“Do I look worried?”

“No, not now, but during those calls you do look anxious,” she said firmly.

“Hmm, I didn’t realize that, I’m sorry. We have had a few issues at the office with a security breach,” he said and frowned.

“There…you are doing it again,” she said, and pointed at his face.

Sebastian blinked in surprise. He looked uncomfortable and shifted lightly on the saddle. “Sorry,” he said.

“Do you have a spy inside the company?” she asked, her eyes sweeping over him.

“No, no, we don’t believe that we do. We took care of that
problem last year. This has something to do with our company systems.”

“Oh…” her voice trailed again. “What are you doing about that?”

“Well, we are very close to a solution.”

“I hope this solution doesn’t include you leaving the country like you did last year,” she said worriedly.

“How are you going to fix it?”

“Our engineers have developed, and are ready to introduce, new security products that can be used globally. We are previewing the designs this week, and hopefully we’ll approve their development
and distribution.” Sebastian’s excitement about the new products
was
evident. Arielle relaxed, and as they started to ride again, she was
drawn
into his enthusiasm. She enjoyed listening to him discussing the
details.

By the time they reached the stables, the sun was slowly
disappearing
below the horizon, painting the surrounding sky with an intense
orange and red color. Sebastian helped her off her horse and pulled her into his embrace. He held her for a very long time.