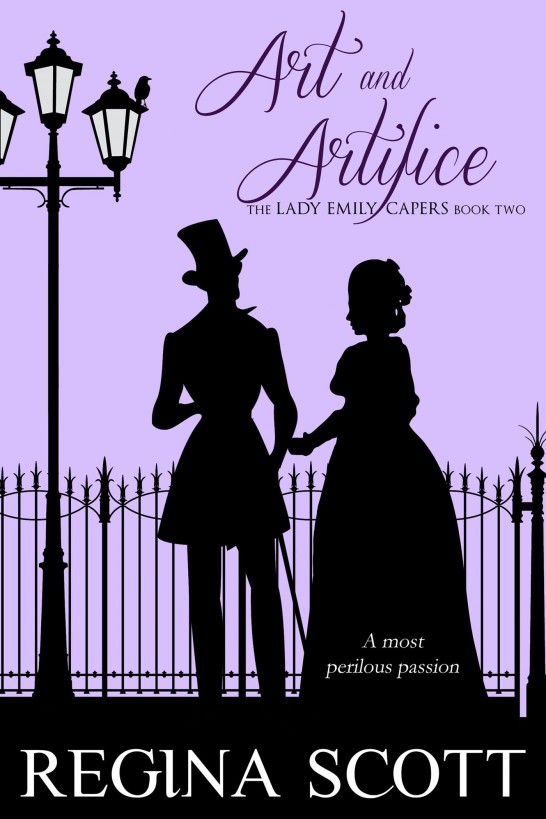 Book 2 in the Lady Emily Capers

This eBook is licensed for your personal
enjoyment only. It may not be re-sold or given away to other people
unless it is part of a lending program. If you’re reading this book
and did not purchase it, or it was not purchased for lending,
please delete it from your device and purchase your own copy. Thank
you for respecting the author’s work and livelihood.

Lady Emily Southwell and her three friends,
Priscilla Tate and Daphne and Ariadne Courdebas, are determined
that someday the world will speak in reverent tones of the year
they made their debuts in London Society. Lady Emily is equally
determined to take her rightful place among the famous artists of
the Royal Society for the Beaux Arts. That is, until her longtime
betrothed Lord Robert Townsend declares his intent to marry her and
whisk her off into the countryside, immediately. What can the
fellow be thinking! And why is handsome Bow Street Runner Jamie
Cropper dogging Lord Robert’s steps, and Emily’s? It’s up to Lady
Emily to use her art to uncover artifice and discover whether Lord
Robert has something more up his sleeve than a nicely muscled arm.
Along the way, a duke’s daughter might just form a perilous passion
for a most unlikely suitor.

Here’s what others are saying about a previous
version of the story:

“
I really just cannot get over how good this
book is! I urge you all to scurry to your closest book provider and
pick up a copy as it is . . . AMAZING!!!” Awarded the site’s Gold
Star for Excellence and a place in the Hall of Fame!--Teens Read
Too

“
I loved the mystery and romance in this
novel! I was hooked from the first page to the last, and the best
part was, this book was not overly obvious, so I was right there
with Emily and her friends as they tried to solve the mystery
surrounding Lord Robert!” Awarded 9.92 out of 10—The Book
Vault

To the Lord, for inspiration and
encouragement

To my Emily and my Larry, for believing in
me

To the ever-supportive Kris for
brainstorming, Lord Snedley, and blood pooling about decapitated
bodies

And to library staff everywhere, especially Marsha
Bates of the Mid-Columbia Library and John Charles of the
Scottsdale Public Library, who point us to books that teach,
enrich, and set us to dreaming of all we can be

Lady Emily Southwell did not think like other
young ladies about to make their debut in London Society. Her
friend Priscilla Tate, for instance, could not stop dreaming of the
elaborate ball that was to introduce them to the world. Their
friend Ariadne Courdebas thought of nothing but plays, operas, and
literary events they might attend, all the while worrying about how
to speak to a gentleman should she meet one. Ariadne’s sister
Daphne, on the other hand, was already counting the number of
hearts she would break as she danced the night away. According to
them, Society would speak in reverent tones of the year they made
their come outs.

Emily had other plans.

“I have decided I will not marry Lord Robert
Townsend,” she said as the Southwell carriage rolled through the
greening countryside toward London, leaving behind the Barnsley
School for Young Ladies, from which she and her friends had just
graduated.

Shoulder pressed against hers, Priscilla
regarded her, golden brow upraised. She was going to be one of the
hardest to convince. Priscilla too knew her own mind, and she was
determined to make a splendid match. Very likely she would, too.
All Priscilla had to do was bat those golden lashes, toss those
golden curls, and the world fell at her feet. Hadn’t she just
inveigled a ride to London in the Southwell carriage rather than
going in her father’s more shabby equipage?

But instant capitulation for a pout was not
Emily’s experience. Her looks did not command attention. Her black
hair was more frizzy than curly and always worse in the rain. They
had a lot of rain in England. And her nose and chin were too
pointed for her to ever be called beautiful. She’d seen too many
portraits to think otherwise. No, when people did Emily’s bidding
it was more often because they wanted to impress her father, the
duke.

“Don’t be a ninny,” Emily’s aunt Lady Minerva
Southwell said across from them, shifting her angular body on the
leather seat. “You and Lord Robert have been betrothed since you
were children, and he’s been living in your father’s pocket for the
last fortnight. Of course you’re going to marry him.”

Emily raised her chin. In truth, her
declaration had been an opening salvo. She hadn’t been certain how
her friends and family would react to her intention to jilt the
fellow. Indeed, she’d been rather resigned to marrying him, the
knowledge that she was spoken for a constant in her life. But the
dangers she’d recently braved at Brentfield Manor, helping to
capture a murderess no less, had made her wonder whether marriage
to Lord Robert was the right course for her. Unfortunately, she
very much expected her father, the Duke of Emerson, to react the
same way as her aunt, which meant she had better start planning her
next move, now.

“Lord Robert’s activities are immaterial,”
Emily said. “I have other plans.”

Lady Minerva snorted, a far-from proper sound
given that her nose was even longer and more pointed than
Emily’s.

“Perhaps we should discuss something else,”
Priscilla put in with her usual winning smile. “I have had a vision
about the Ball.” She lowered her voice and leaned forward, the
glossy black feathers on her fashionable bonnet sweeping her cheek.
“Goldfish.”

She said the word as if attempting to imbue
it with mystical properties. Emily frowned.

“Ah, goldfish,” Lady Minerva said with a wise
nod. She didn’t fool Emily. She’d been wisely nodding, her gray
tightly wound curls bobbing along her narrow face, since they had
left the Barnsley School. Most of the time, her eyes had been
closed.

“Like at the Celebration Dinner with the
Allies last year,” Priscilla said with a look to Emily. “The Prince
had streams meandering down the table and real goldfish.”

Emily wrinkled her nose. “
The Times
reported the fish died halfway through dinner! I doubt the sight of
rotting fish will do much to set the sophisticated tone you so
desire, Pris.”

Priscilla sniffed. “I’m quite certain my fish
would not be so vulgar as to die before the final course.”

“Quite right,” Lady Minerva said with another
nod. “And what about finches?”

Finches? Oh, but this ball would be the death
of Emily! She knew Priscilla couldn’t afford to have her own come
out. Her side of the Tate family had never been wealthy, and now
with the Dreaded Family Secret dogging her heels, it was more
important than ever that Priscilla marry well. Emily had convinced
His Grace that Priscilla should come out with her and given her
free rein to plan the event. Invitations had already gone out to
the more than three hundred people Priscilla was certain must
attend. But Emily simply couldn’t allow this ball to overtake more
important matters.

“I suppose we could set the finches amidst
the roses I’ve ordered and have them serenade the guests,”
Priscilla said, one gloved finger tapping at her chin. “The theme
of the Ball is an enchanted garden, after all. What do you think,
Emily?”

Emily shook her head. “No finches. They’d fly
into someone’s hair, or worse.”

“Perhaps stuffed finches, then,” Priscilla
compromised. “Surely someone in London makes them. After all, we
want this to be the most talked about event of the Season.”

Emily could only hope she was right. If
everyone was talking about the ball, perhaps they would fail to
notice that Emily had backed out of an engagement nearly as old as
she was. And she could spend her time instead applying to Lady St.
Gregory for admittance to that rarified air of the artistic
elite.

Lady St. Gregory was the President of the
Royal Society for the Beaux Arts, the one trusted by the Queen to
enlist new members. It was the only society open solely to members
of the aristocracy. Lady St. Gregory sculpted in marble. Ariadne
had read them an account of the lady’s most recent work just a
month ago.

“A triumph of movement and emotion,”
The
Times
had said.

Surely she’d see the worth in Emily’s work.
After all, painting was Emily’s passion.

She wasn’t sure whether it was the heady tang
of turpentine or the feathery touch of a brush that first seduced
her, but some of her happiest times had been behind an easel. She
often remembered the look on her art teacher’s face when Miss
Alexander had seen Emily’s
The Battle of Hastings
. William
the Conqueror stood high on a hill, banner waving in the breeze,
while strung out around him, as far as the eye could see, lay the
bodies of fallen Saxons. It had taken Emily all term to paint.

Miss Alexander had gazed at it, dark eyes
wide, and said, “Oh, Lady Emily, this is very, very good.”

Good enough, Emily thought, to grant her
entrance to the Royal Society for the Beaux Arts.

She was still considering the matter as they
entered London, but she couldn’t help a smile as Priscilla pressed
her nose against the glass of the carriage window to stare at the
Great City. The massive stone buildings soared into the air,
blocking the evening sky. One set was gracefully classical, another
heavy and pompous, a third sprawling in all directions. On each
corner stood hawkers, calling for violets, penny-a-sheet
newspapers, roasted nuts. Everywhere was noise, movement, color.
She felt her fingers trembling and knew it was from the desire to
find her sketch book.

“Do you really intend to refuse the
betrothal?” Lady Minerva asked after they had deposited Priscilla
at her home, which Emily had been saddened to find was in a
forgotten corner of Mayfair.

Emily eyed her aunt. Like crows to carrion,
Lady Minerva tended to show up whenever something dismal had
happened. She’d cared for Emily and her older sister Helena for a
short time after their mother had died when Emily was nine. She’d
watched over the London house while His Grace was in Vienna trying
to salvage what Napoleon had all but destroyed. It somehow seemed
fitting that she had been dispatched to bring Emily home from
Barnsley and chaperon her for the Season.

Emily would have much preferred to have Miss
Alexander beside her, but her mentor was on her honeymoon and
wasn’t expected back until later in the Season.

“I most certainly will refuse,” Emily told
her aunt. “I intend to paint. I don’t want a Season, or a husband,
to interfere with that. And if there is a type of woman a man
expects in a wife, I am persuaded I shall never fit the mold.”

Her aunt harrumphed. “I shall be very
interested in hearing what your father has to say about that.”

Unfortunately, when they arrived at the
townhouse, an impressive edifice three stories tall of elegant
stone with a red-lacquered door gleaming with brass, their family
butler informed them that His Grace was not at home.

“He’s been called away by the Prime Minster,
but expects to see you at dinner,” Warburton promised. At least she
could take solace in that. And she couldn’t help the warmth that
flooded her just seeing Warburton’s dignified face. Their butler
had been with His Grace as long as she could remember, and his hair
had been white nearly that long. When she was younger, she used to
think that one day she’d grow tall enough to look him straight in
his bright blue eyes. She’d long since resigned herself to the fact
that that was never going to happen. No one was quite as tall as
Warburton.