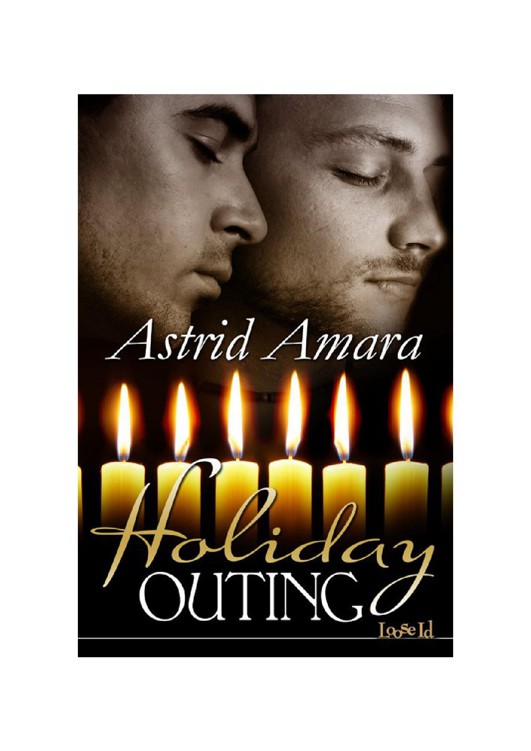 offensive to some readers. Loose Id® e-books are for sale to adults ONLY, as defined by the

laws of the country in which you made your purchase. Please store your files wisely, where

they cannot be accessed by under-aged readers.

This e-book is a work of fiction. While reference might be made to actual historical events or

existing locations, the names, characters, places and incidents are either the product of the

author’s imagination or are used fictitiously, and any resemblance to actual persons, living or

All rights reserved. This copy is intended for the purchaser of this e-book ONLY. No part of

this e-book may be reproduced or shared in any form, including, but not limited to printing,

photocopying, faxing, or emailing without prior written permission from Loose Id LLC.

I was pleased to hear that, due to inclement weather, my flight was delayed.

For some people, the prospect of spending the holidays marooned in a plastic chair

sounds like a nightmare. But for me it was a very reasonable -- one might say even attractive

-- alternative to enduring Hanukkah with my parents.

Before I’m judged too harshly, it is important to point out that my parents, Leonard and

Helene Levinson, while decent, law-abiding folk who have never murdered or even skimped

on their taxes, are surprisingly terrifying human beings. Especially when you are their only

I love my parents. I’m grateful that they raised me. I just wish they would stop raising

me and let me get on with my own life.

I had successfully avoided my folks for four years. I moved to Seattle specifically to be

as far away from them as the continental United States would accommodate. I concocted

excuses every year not to return home to Connecticut. But the long arm of guilt stretched

across the country and stoutly slapped my face. My mother muttered of various polyps and

varicosities. My father was surely inhaling his last breath. I had to come home, I was their

And so I agreed, but mostly because I had another reason.

I had turned thirty that November, and I figured it was time to put an end to the

I had to break it to my parents that I was gay.

And not only gay; I actually made money being a gay fiction writer.

All they knew was that I wrote. They thought I was unsuccessful. How could I tell

them my last novel, Nautilus, won a Lambda award and was a bestseller available through

Did Hartford even have a local gay bookstore?

Was I really going to do this?

Well, the delayed flight gave me a respite. I settled into a molded plastic chair, bent my

neck at an unreasonable angle in an attempt to “rest” my head on my shoulder, and closed

my eyes. Problem solved. No large family scene, no sighing over the now lost theoretical

grandchildren, no rows about the fact that I would not be passing on the family traits (heart

To my dismay, the damned airline efficiently found me a replacement flight, and

before long I shuffled onto a touch and go, turbulence-prone commuter flight, then another,

and another, until I arrived in Hartford much worse for wear and unprepared for the

fourteen inches of snow that had fallen since morning.

My bag was missing. This wasn’t as much a surprise as an inevitability, given the flurry

of last-minute airline transfers. This meant I would be living the next twenty-four hours out

of my carry-on. All my presents were in my checked luggage, along with my clothes, my

razor, and, I’m pretty sure, my balls. Because the second my feet stepped out onto the frigid

landscape of New England, I felt like an insecure teenage boy again.

Other than my carry-on, the only item I had with me was a small but heavy vinyl

suitcase stuffed full of copies of my books, including my latest bestseller, which my agent

forced me to schlep across the country for a book signing in Bridgeport. Upon landing, the

first message I received on my cell phone was that the book signing was canceled, due to

Now all I had to give my family for Hanukkah was twenty copies of Nautilus.

I sniffled in the frigid air and braced myself. Against all odds, I was here. The world

outside Bradley International Airport turned the color of bone. Everything merged in a

blurry flurry of snow. I knew the weather was particularly treacherous when I saw even

I looked around for my parent’s beige Lincoln Town Car, but could not see it.

There was no way they forgot I was coming. I’d called them from my last transfer and

they said they would pick me up.

Standing before me -- towering over me, actually -- was Ethan Rosenberg, looking

Excuse me. Dr. Ethan Rosenberg, the acclaimed physician, son of my mother’s mah-

jongg partner, kid I grew up living next door to. The boy who tormented me in high school.

The crush I had that could never be expressed. Damn him. Damn, damn, damn. Mr. Perfect

himself was at the airport.

Ethan had a boyish handsomeness that only improved the more he aged. His light

brown hair ruffled in the breeze. His hazel eyes sparkled with amusement. He was tall, did I

mention that? His clothes broadcast the number of digits in his bank account. His tweed scarf

matched his leather boots. The REI tag was legible on his warm-looking gloves. I had a

sudden, overwhelming urge to stick my hands inside of them and feel Ethan’s heat.

“Hi, Ethan,” I said, teeth chattering, squinting through the whiteout of snow for my

parents. “And here I thought the chill in the air was just the blizzard.”

“Picking up a relative?” I said casually, hoping he didn’t notice me checking out his

arms, which looked sculpted even through layers of wool and down. “I’m surprised you

“Oh? My mother still keeps me posted. I get all your newspaper clippings.

Congratulations on finding your lost cat last month, by the way.”

I realized I was running off at the mouth, as usual. Always so attractive when coupled

“So who are you here to pick up?” I said, attempting a semblance of civility.

“You, actually.” Ethan lifted an eyebrow at my bag. “Where’s the rest of your luggage?”

“En route to Zanzibar.” I narrowed my eyes. “Where’s my dad?”

“He’s back at the house, but didn’t want to drive in the snow so I volunteered to get

you.” Ethan was already walking toward his car. He effortlessly plucked the suitcase full of

books from my hand. “Let me get that for you.”

I yanked it back, masculine pride rising up in me. “I can carry it fine, thank you.”

I slipped and stumbled through the snow as I followed him toward the parking lot.

How did he walk so unerringly on ice? Maybe he was a secret visitor from some cold

intergalactic planet. He certainly couldn’t be human. There was no way his hair could always

be mussed in such symmetry without the influence of superpowers.

Why did Ethan have to be here? For that matter, why was he here anyway?

“Why were you at my parents’ house?” I asked belatedly. I slipped on a patch of ice and

Ethan’s hand shot out, grabbing my elbow, steadying me.

He smiled. “I’m staying at their house over the holidays.”

Ethan let go of my arm. “My dad’s in the hospice unit. I came home to see how he’s

doing, and your mother offered to let me stay with them for a few days.”

I almost asked about his mother, and then remembered another clipping, earlier this

So Ethan had lost his mother. And unless “hospice” was a fancy new term for “recovery

ward,” it sounded like he was about to become an orphan. Even if he tormented me in high

We reached his car. It was a massive SUV, the kind that my people in Seattle would

denounce, and I wanted to hate him for it, but then I realized, it probably handled well in

snow and I should be grateful.

“All the rental company had, unfortunately,” Ethan said, as if reading my mind.

“I moved to Seattle,” he said, and I felt like I had been sucker punched.

could never intertwine. Seattle was for the adult Jonah Levinson, the confident, openly

homosexual, successful writer who had friends and a great apartment overlooking Lake

Washington and a kayaking obsession.

Dr. Ethan Rosenberg belonged to the Connecticut version of Jonah Levinson, a person

full of self-doubt and guilt and incomprehensible urges, unnaturally focused on the one boy

who showed him up and humiliated him. Ethan himself.

I fumbled at the parking gate for my wallet but Ethan was way ahead of me. He paid

the attendant and gave her one of his customary flirtatious winks.

“Don’t worry about it. It’s really good to see you again.” Ethan shot me a dashing smile

and then appropriately turned his attention to the blizzard enveloping us.

We ran into each other around the holidays when I returned to Hartford. Our parents

had been friends since before we were born, and we shared two high school buddies in

common who still lived in the area. We had even found ourselves at the same house parties